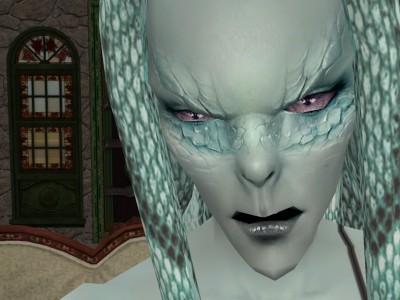 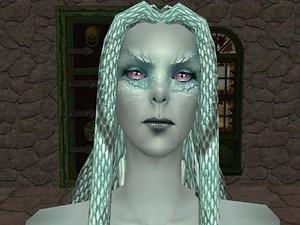 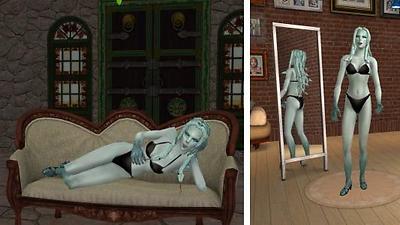 Created by Sandicee4 View Policy / About Me View Downloads Home

Is it just me, or did it seem like Voldemort had a "thing" for his pet snake? Think about it: she was always with him, he gave a bit of his soul to her & he took care of her like he did for no-one else - getting her food, stroking her, etc. It's an original tragic love story!! I reckon that if Voldemort had won the war, he would've used some crazy evil magic to turn Nagini into a human. But . . . alas . . . 'twas not to be. So I've done it for him.

Here's Nagini in sim form. It was hard to make slit-like nostrils, so the nose is pretty messed up & she's UGLY but she also has a proud, regal look to her face that makes her attractive in a different way.

Content NOT Inluded
* The hair mesh by Wicked_sims
* The clothes mesh by particleman
Make sure you follow the links down the bottom & download both of the meshes.

This download requires one or more meshes to work properly. Please check the Description tab for information about the meshes needed, then download them below:
Also Thanked - Users who thanked this download also thanked:
Harry Potter: Lord Voldemort
by UdontKnow
Count D from the manga "Pet Shop of Horrors"
by Lunar Eclipse
Emily * Porcelain Doll Child
by kamikitten
The Banshee
by Wicked_sims
Cylon Centurion as a Servo
by earendil
Miss Worm
by Reinkaos
Harry Potter Trio: Hermione Granger
by UdontKnow
~*Eclipse [Original Sim] Mirador*~
by Lunar Eclipse
Werewolf
by Nova L
Salus - A New Boy by Zombie Jill
by ZombieJill

* If you use any of my sims in snapshots, as models, in stories, etc please give credit to me (a link to the thread would be cool too, if possible, but not necessary).
* If you use one of my sims in a stroy, I would love to see it!! So PM me with a link to it if you want to.
* Please don't re-upload my sims somewhere else and claim it as your own. That's just NOT cool.
* If you want to use one of my sim's face as a base for your own, go ahead, just make sure you link back to my original sim if you upload it.
* Enjoy!! Fanks! :)