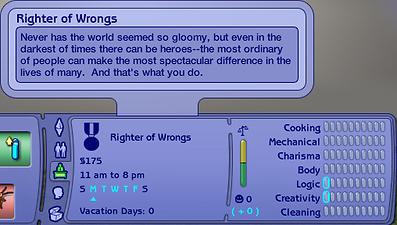 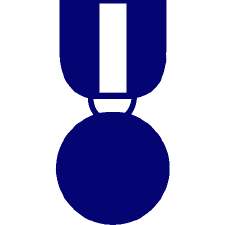 3,879 Downloads 168 Thanks  Thanks 12 Favourited 23,461 Views
Personal Picked Upload! This is a personal favourite of the creator!

Created by Deastrumquodvicis
View Policy / About Me View all Downloads
Uploaded: 23rd May 2011 at 11:35 PM
Updated: 1st Jun 2011 at 3:53 PM
Being the kindhearted geek I am, I wanted a career that would take my Sim from your average good Samaritan to basically the Doctor (Doctor Who). So.....basically this is Doctor Who with a bit of Batman, Babylon 5, Men in Black, and just a dash of The Hitchhiker's Guide to the Galaxy. Never in as many words, of course.

I had tremendous fun with the chance cards (as you can see from my onomatopoeia in my favorite chance card), letting my nerdbrain run free. I tried not to get too carried away, though one of them is quite daft ("Let them eat dijon!"). As a result of my swollen pride in them, I've increased the chance of seeing a chance card from 50% to 55%.

Although I did this over a year ago, I've only just tweaked it to my satisfaction. There wasn't much to do but fix a few awkward sentences and grammatical oopsies. It should work for University and up (I tested it on Nightlife), and I know as a fact it crashes Base Game.

Not a lot of levels have special clothes (I mean, who changes into a special outfit to stop people mugging old ladies anyway?), but the Solar System's Voice of Fairness has a space-suit for semirealism.

I had a hard time coming up with job titles that didn't use the same word all the time (hero/helper/protector), so yay for my mental thesaurus! (and I really wanted an excuse for my Doctor Sims' jobs to be Time's Champion...) The levels go as I would think they would--from local hero to known throughout eternity. No one starts at the top. Unless time itself's being particularly wibbly-wobbly, timey-wimey and then you have a different problem altogether.

Never has the world seemed so gloomy, but even in the darkest of times there can be heroes--the most ordinary of people can make the most spectacular difference in the lives of many. And that's what you do.

Your philanthropic deeds have earned you the respect of many throughout your country, but there's even more you could be doing to help the world be a little bit brighter, a little bit better, and a little bit kinder.

There's not a person on the continent who haven't heard of your capacity for kindness. You'd drop everything to help someone in need, no matter who they are or what they need.

Doing what's right is important in any situation, and it's your job to make sure the right gets done. The entire planet is under your protective eye, and you dare not let them down.

Okay, yeah, Earth's been sorted out quite nicely--no one need worry about anything as long as you're there--but those pesky Martians need their laws re-vamped, the Venusian tyrant needs overthrowing, and climate change on Neptune is getting out of control. Who better for the job than you?

lv 6
Conscience of the Quadrant

From Alpha Centauri to the heart of the galaxy, everyone in your quadrant knows not to mess with you. Your kindhearted endeavours have earned you a reputation as one of the most honest people ever to live in this sector of the galaxy, so don't mess it up!

lv 7
Protector of the Galaxy

The invaders from Andromeda stopped their invasion once they got word you're protecting the galaxy. Good for them--you were a little busy at a peace conference on a space station on the other side of the galaxy! But there are some species more intent on domination than the Andromedans, and you've got to keep your eyes sharp!

Several galaxies have banded together in your name to create a lasting era of peace throughout the Universe. It's great to feel so good, but the little things have been getting out of control again, and if you're going to put them back to rights, you have to work hard.

lv 9
Defender of the Universe

There's not a galaxy in the universe without a legend of your honor and kindness. Which can be good or bad, depending on your perspective, of course. You've helped every sentient being you can who's asked for your help (and then some), but what about the future wrongs these people will do? What will happen when you're gone?

You travel through space and even time, making what was wrong into something right. You are undeniably a hero as you take up the banner of justice and the sword of courage. No matter when or where trouble strikes, you'll be there to sort it out.