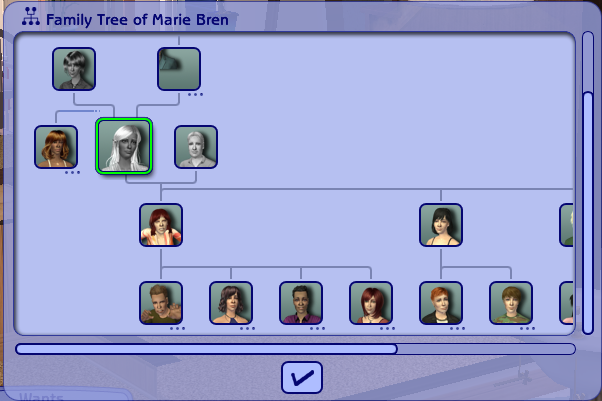 69,011 Downloads 1,023 Thanks  Thanks 278 Favourited 114,222 Views
Personal Picked Upload! This is a personal favourite of the creator!
Created by kestrellyn
View Policy / About Me View all Downloads
Uploaded: 21st Apr 2018 at 2:59 AM
Updated: 17th Nov 2018 at 5:32 AM - Changes required
Do you ever hate how second cousins have no problems dating each other, or how great-grandparents can't encourage and family-kiss their great-grandchildren?

This hack causes the following relationships to be recognized as family for the purposes of social interactions:
For these relations, there will be no romantic interactions available, but there will be family kiss/encourage interactions. Pescado's autosoc can still be used in "romanticate" mode with them, but it will be unable to queue actual romantic interactions. Interactions with extended family members do not satisfy "talk with a relative", "relative gets married" etc. wants, they are not taken into account when deciding if it is possible to have a family reunion (for performance reasons), and they will appear without the family icon and possibly with a chemistry icon in the relationships tab, but other than that they are treated as family.

If you want only great-grandparents/grandchildren and great-aunts/uncles and grand-nieces/nephews to be considered family, use extendedfamilypartial.zip instead. Don't install both files.

Hack Compatibility Note: This hack modifies four existing global BHAVs and adds five new global BHAVs, in the range from 0x701 to 0x705 (extendedfamilypartial only includes 0x703-0x705); any hack that also adds global BHAVs in this range will conflict with this one, potentially very badly depending on load order and what exactly the BHAVs in the other hack do. Check with HCDU, no conflicts with this hack are expected/ok. This hack is completely incompatible with the InTeenimator, as it adds global BHAVs in this range (and also in practically every other available range, as far as I can tell). This hack also modifies three relationship-checking BHAVs in group 0x7F739728, and two other BHAVs in that group that were causing "too many iterations" errors when calling the global BHAVs, which were changed to use the Relationship primitive instead, with no change to their functions.

Game Compatibility Note: In theory, this should be compatible with any game configuration. The main potential problem is "too many iterations" errors, which is what happens when the game decides that it has encountered an infinite loop after many BHAVs have been called. I have complicated the family checks, but not by much, and a lower tolerance for "too many iterations" may be offset by the fact that early versions of the game had many fewer wants and fears that necessitated iterative checks over every sim in the hood (for example, neither of the checks I had to change are even used in the base game).
Files Need help with downloading or installing content? Click here!

Possibly also of interest: my inlaws fix, which prevents your sim's parents from inappropriately hitting on their child's new spouse.

Also of interest might be my found family hack, which allows you to treat anyone as family, no matter how or whether they are related.
Also Thanked - Users who thanked this download also thanked:
Sim Shadow Fix (updated 2 Jan '16)
by Nopke
GunMod's Camera Mod 3.1 -- All Game Versions --
by GunMod
"Put your homework away properly!"
by MogHughson
Rugs - zMOG!! Off Grid!!
by HugeLunatic
Watch TV from all chairs
by MogHughson
20 Sliders
by Nopke
Marriage: Last Name Chooser [FIXED 2008-10-26]
by Marhis
Business Mods
by simler90
Accessible toddler high chairs
by Lamare
FIXED ver: "Select your cemetery" after sims died
by arek_91
Packs Needed
None, this is Sims 2 base game compatible!
Other Information
Type:

– Social Mods : Social Interaction Mods (things that change how sims interact with each other)
– Global Mods : Mods that change the way the game works without requiring any user intervention.
Tags