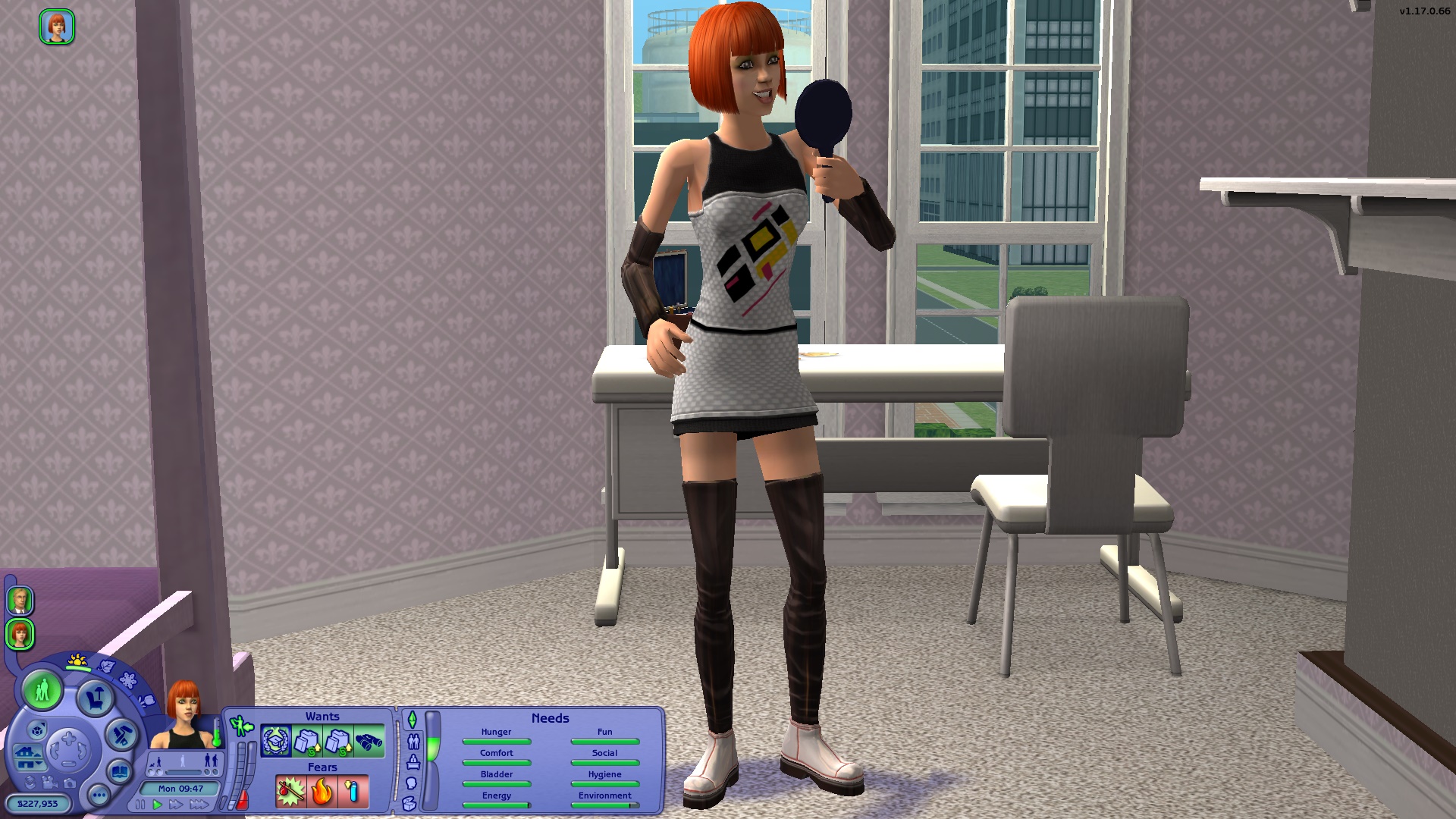 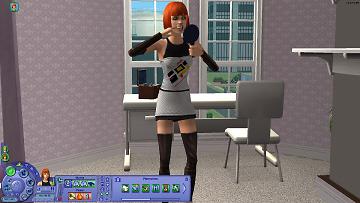 261 Thanks  Thanks     67 Favourited
UPDATE 11: This update adds a feature/fix to the mod which makes it so that the game recalculates the sim's mood every hour regardless of whether the sim is selectable or not. In an unmodded game, the game only recalculates selectable sims' moods every hour.

UPDATE 10: I found a serious Maxis oversight. Whenever Sim A successfully performs the Perk Up (OFB reward) interaction towards Sim B, the game is supposed to increase Sim B's mood by +50 for 3 hours. As you can see, this is a very cool interaction. After the 3 hour period, the game is supposed to decrease the sim's mood by -50. However, what happens is that if the sim satisfies a want/fear, or if the sim's aspiration level changes, then the game deletes the +50 boost, but still continues to count the 3 hour period, at the end of which, the game still decreases the sim's mood -50, leaving the sim with a very low mood. This update fixes this problem permanently. Now even the regular version of the mod modifies the Sim - Mood Boost BHAV.

UPDATE 9:
- Decreased the mood effect of red aspiration from -50/-25 to -25/-10.
- For the Advanced Version, temperature has no effect any more. In addition, memories have a higher effect now, but positive memories have a lower effect, because there are so many of them.

UPDATE 8: This update is only for the Advanced Version. I have made it so that only a body temperature of 90 and higher or -90 or lower can decrease sims' mood. It decreases mood by -15.

UPDATE 7: This update is only for the Memory Version, but I have changed the name of the Memory Version to Advanced Version, as I have added more features to it in this update:
- The game now checks the last 100 memories, rather than 200.
- Zombies always have -15 mood.
- Temperature now affects mood except the mood of zombies, bigfoot, active werewolves, vampires and servos. If the sim's body temperature is 70 and higher (very hot), or -70 or lower (very cold), the sim's mood is decreased by -10. The mood is decreased by an additional -15 if the sim's body temperature is 90 (extremely hot) or higher, or -90 or lower (extremely cold).
- In the Advanced Version, I've set lower red aspiration to decrease mood by -30 instead of -50, and upper red aspiration to decrease mood by -15 instead of -25. You can obviously tune these values. However, never change the "Gold" value (which refers to Platinum aspiration) in the Tuning resource. It should always be set to 500.

UPDATE 6: This update is only for the Memory Version. I found out that there was a rare situation in which the game could give an error called "Error: Object referred to must be a person" if you had the Memory Version. This would happen when the game would check the sim's gossip memories and then check to see the relationship between the sim and the memory owner. The interesting thing is that the owner of memories in the Sims 2 should always be a sim/pet. However, it looks like in certain pre-made Maxis neighbourhoods, certain sims have memories which are owned by neighbour IDs which do not exist. It is possible Maxis deleted those sims. In such a situation, the game would give that error, preventing the mod from working. This update fixes this issue. Natasha Una in Desiderata Valley was one of the affected sims.

UPDATE 5:
- I have decreased the Platinum effect to 250.
- In the Memory Version, the divisor for personal memories is now 75, and for gossip memories it is 125.

UPDATE 1: This update is only for the Memory Version. This update makes the mod more efficiently check the sim's last 200 memories.

In an unmodded game, a sim's mood is mostly calculated by checking the sim's needs. I really hate this. This is by far the worst thing in the Sims 2. Sims almost always have high mood, as it is so easy to satisfy needs, and as sims always try to increase their lowest needs. Because of this poor design, everything is very easy in this game. Social interactions always succeed, because everyone has high mood. Job performance always increases greatly, because sims are almost always in a good mood when they go to work. Why is it that only Platinum aspiration has the ability to affect the sim's mood? I think sims who have red aspiration should be in a lower mood than usual.

This is one of the simplest mods I have ever made, but it has had the most visible influence in gameplay. I love this mod, because it actually makes gameplay challenging. If your sim has red aspiration, this will effectively mean that they will gain much lower job performance when they go to work (and if their mood is in the red, then they will lose job performance), they will not be able to use skilling objects as often, they will find it much more difficult to accept any social interaction (including Sales socials), they will be much more likely to perform negative socials, and so on.

Memory Version: It looks like Maxis originally intended memories to affect mood, too. So, positive memories would increase and negative memories would decrease the sim's mood. This was scrapped, and instead they added Wants and Fears and the Aspiration meter to the game. Sims 3 and 4 would take this idea of memories affecting mood in the form of moodlets and emotions. I think memories should definitely affect their mood directly, so I made this alternative version. The Memory Version is the same as the Regular Version, but has the following additional feature: the game also checks the sim's last 200 memories, adds the current strength of all those memories together and then divides the final value by 25. If the final value is higher than 25, it is set back to 25. If it is lower than -25, it is set back to -25. Then, the final value is added to the sim's mood. So, sims who have had recent positive memories will be in a better mood than sims who have had recent negative memories. I have also released a new mod called Memory Mod that fixes a few problems with certain memories in the game. Maxis made a mistake and set the initial strength of private school memories to -19999, meaning that if you have the Memory Version, and if a sim receives a private school memory, their mood will be decreased by -25 forever. You need my Memory Mod if you want to use the Memory Version of this mod.

Tuning: You can easily tune this mod.

If you want to change how Aspiration level affects mood, then:
- Open this mod in SimPE, and click on the resource called "Mood Boosts".
- Make sure you are in Plugin View below. You should see six lines going from "Very Bad" to "Gold". These refer to Aspiration levels.
- Very Bad=Lower Red, Bad=Upper Red, Neutral=Lower Green, Bronze=Upper Green, Silver=Gold, Gold=Platinum.
- Left-click on each and change the Dec number on the left side to how much Aspiration level should increase/decrease mood. Do NOT change the Gold entry. You can change the rest. Then, click on the Commit File button on the right.
For example, you can set Silver to 0, Bronze to -5, Neutral to -10, and leave Bad and Very Bad at -25 and -50. This way, only Platinum aspiration can boost a sim's mood, Gold aspiration won't affect mood, and all other levels will decrease mood the lower the level is.

Requirements: It may work even in Base Game, but I can only guarantee that the mod will work if you have Apartment Life and M&G.