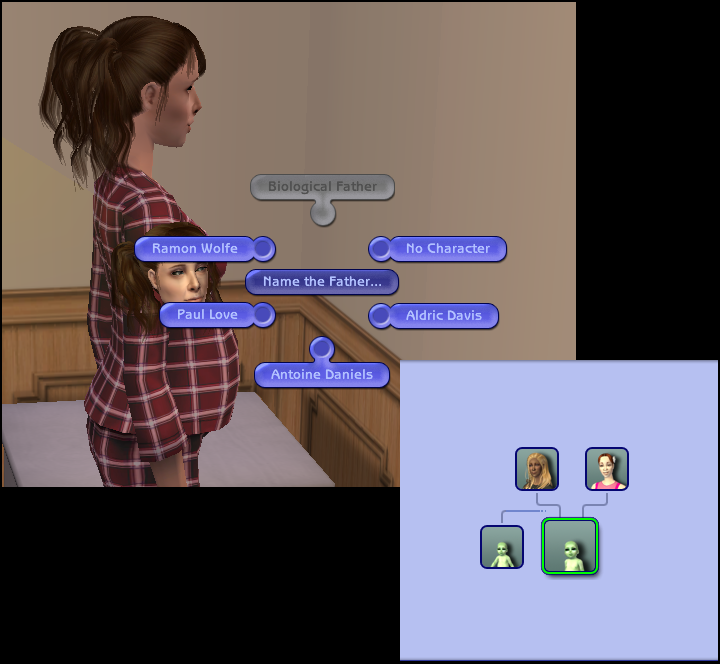 13,571 Downloads 305 Thanks  Thanks 104 Favourited 29,592 Views
Personal Picked Upload! This is a personal favourite of the creator!
Created by kestrellyn
View Policy / About Me View all Downloads
Uploaded: 12th Jan 2020 at 2:54 PM
Updated: 3rd Jun 2021 at 12:52 AM
Updates:
Have you ever thought it was weird that when your female sims cheat on their partners and get pregnant, their partner always knows that the child isn't theirs? Have you ever wanted your sims to be able to adopt their spouses' alien children? Do you get annoyed that all aliens are somehow considered related? Would you like your lesbians to be able to adopt their partners' babies by sperm doners? Or do your sims maybe have multiple spouses and you just want the biological parent to not necessarily be the "real" parent? Would you like to have two sims who are merely best friends live together and raise kids together even if the kids are not biologically related to both of them? Sure, you can change the family ties with the Sim Blender after the fact, but wouldn't you like to get to choose which sim gets the memory of having the baby and the Have a Baby want fulfilled? With this hack you can do all of those things!

This adds a self interaction to pregnant sims who are showing, which allows you to choose a father for the bab(ies). This will not affect the genetics of the babies, but only which sim they consider their father. You will get a choice from the following sims:

You can also select "No Character" for a baby with no father (similar to a plantbaby), or "Biological Father" to revert your setting back to the default.

When the sim gives birth, the father (or lack of father) you chose will be the child's second parent, but they will have the genetics of the biological father.

Game compatibility:
This hack should be compatible with all game versions.