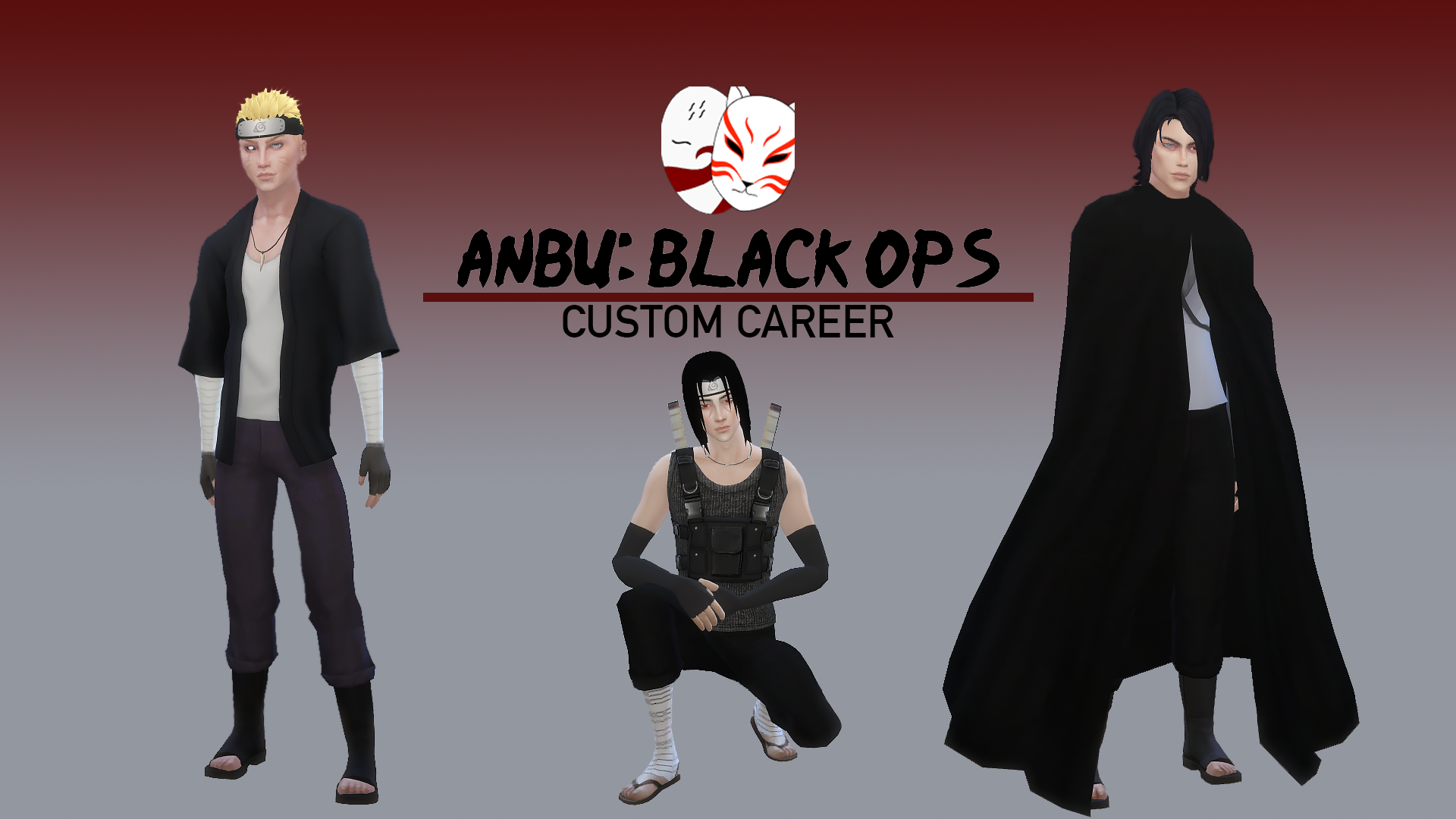 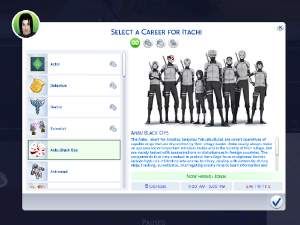 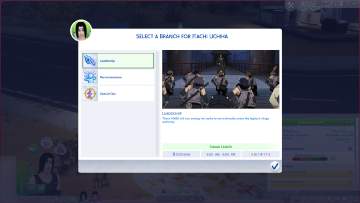 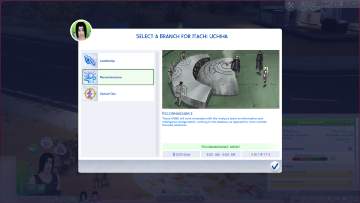 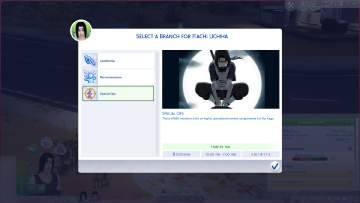 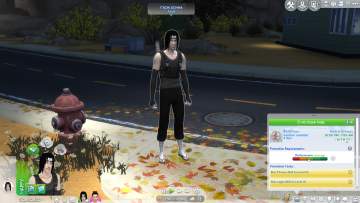 244 Thanks  Thanks     33 Favourited
[6/22/2021] - Script and images are still working on my end, please let me know if you find any issues! Tested with no other mods installed, with the latest version of MCCC, and lastly with all of my other working mods.

**Note: you may notice the obsolete download options. This is due to neither of my 2 brain cells realizing, in the past, that I could simply swap out the uploaded file with a new one, rather than separating every...single...update. Ha. Heavy is the head that wears the clown wig.

This Anbu career track is inspired by the anime Naruto and Naruto: Shippuden. I fell in love with RayBreeder7's Naruto Ninja Career mod, but wished that there was a track to become an Anbu agent. So, I made this! It is my first script mod. This career is supposed to be somewhat difficult, as is canon within the Narutoverse. Therefore, it is fairly lucrative right off the bat, and promotions will have multiple requirements. There are 5 levels and 3 tracks.


Compatibility:
Career description: The Anbu , short for Ansatsu Senjutsu Tokushu Butai, are covert operatives of capable ninja that are dispatched by their village leader. Anbu nearly always make an appearance on important missions inside and in the vicinity of their village but are mainly tasked with assassinations or disturbances in foreign countries. The assignments that they conduct to protect the village from exceptional threats include high-risk infiltration into enemy territory, dealing with extremely strong ninja, tracking, surveillance, interrogating enemy ninja to learn information and missions requiring specially trained ninja. Due to the actions of the group, one can appear changed and corrupted of kindness. Due to the often sensitive nature of their missions and the unique abilities they sometimes possess, Anbu are expected to destroy their bodies if they are too badly injured on a mission so that they can't be captured.

Join text: Ready to take the next step in your ninja career? Welcome, Jonin. Train hard and hone your jutsu- you're now on a path only a select few have walked. Better start adjusting your eyes to the darkness lurking amidst the sunshine.

Level 1- Jonin
Description: Jōnin are generally highly experienced and highly skilled shinobi who serve as military captains. Jōnin are generally able to use at least two types of elemental chakra. It is not unusual for jōnin to go on missions alone. They are often sent on A-rank missions, and if experienced enough, S-rank missions as well (which are considered to be the greatest difficulty).
Pay: $100/hr
Hours: 8am-4pm
Days: Monday through Friday
Promotion Tasks: Reach level 3 fitness skill, reach level 2 logic skill, reach level 3 writing skill

Level 2- Anbu Recruit
Description: Hand-picked by the kage themselves, new recruits will be starting on intelligence missions straight away. Assigned to a team of three, they will likely be covering assignments in or near the village for now.
Pay: $150/hr
Hours: 7am-3pm
Days: Monday through Friday
Promotion tasks: Witness the death of a sim. Reach level 5 fitness skill, level 5 logic skill, and level 5 writing skill

Level 4: Anbu Captain
Description: You are now a leader of an Anbu team. The leaders of these teams are called squad leaders (分隊長, Buntaichō), and it is a position held in high regard. You are responsible for mission success and handing in completed reports.
Pay: $300/hr
Hours: 8am-5pm
Days: Monday through Friday
Promotion tasks: Max level fitness, max level logic, max level writing

Level 5: Anbu Commander
Description: The commander of the Anbu, which consists of some of the villages' most skilled shinobi implies that they are an extremely powerful ninja. Observant and highly skilled in both ninjutsu and kenjutsu, this shinobi is a major player in the ninja world.
Pay: $500/hr
Hours: 8am-5pm
Days: Monday through Friday

Level 4: Psyops Agent
Description: Your missions consist of gathering intelligence on enemy threats via spy tactics or even by posing undercover. The missions are often long, and combat is avoided unless absolutely necessary. While not on a specific assignment, you will aid the Barrier Team in sensing and intercepting threats or other disturbances.
Pay: $300/hr
Hours: 8am-5pm
Days: Monday through Friday
Promotion tasks: Max level fitness, max level logic, max level writing

Level 5: Torture and Interrogation Force
Description: People are often taken here and left in these agent's hands in order to extract information from them through various means, whether they are living or dead. There is a special division dedicated to the autopsying of corpses. A select number of their members are referred to as "elite chūnin", some of whom are part of the division known as the Analysis Team; a team led by Inoichi Yamanaka, who specializes in the extraction of information from targets using unique techniques, such as the Psycho Mind Transmission.
Pay: $500/hr
Hours: 8am-5pm
Days: Monday through Friday

Level 4: Hunter-nin
Description: Hunter-nin track down and kill missing-nin from their village, retrieving the head as proof and disposing of the rest of the body so as to not leave behind any information for their enemies.
Pay: $300/hr
Hours: 10pm-7am
Days: Monday through Friday
Promotion tasks: Max level fitness, max level logic, max level writing

Level 5: Ō no Kurai Kage
Description: The Kage's shadow, O no Kurai Kage are elite assassins and the highest-ranking combat operatives, tasked with S-class assassination assignments performed under the cover of night. Targets can range anywhere from political figures to entire clans or settlements. Weak spirited individuals will not make it this far. It is a lonesome and grueling life, but the sacrifices made are invaluable to the fate of the ninja world.
Pay: $500/hr
Hours: 10pm-7am
Days: Monday through Friday


Additional Credits:
Zerbu's Mod Constructor V4
Mashashi Kishimoto for creating Naruto
Studio Perriot for producing the anime and the images I have used from it

Need more information?
Back to download view
21 Comments / Replies (Who?)