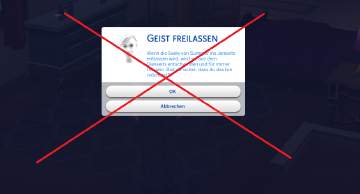 27 Thanks  Thanks     6 Favourited
These urns annoy me! I always release them immediately and then destroy the urn. But that's two steps! And this annoying confirmation! And also wait until the Grim Reaper is gone? In my opinion this is too long!

What does the mod do?
This simple mod lets you destroy an urn instantly without first releasing the ghost and removes the annoying confirmation dialog. The release then happens automatically. Now all urns (no matter with or without a ghost) can be destroyed immediately and without confirmation. The possibility of releasing the ghost without destroying the urn also remains. I also allowed the children (but not toddlers) to do both, which EA blocked. In addition, the two interactions are no longer blocked if the Grim Reaper is still present.

What's new in the last update (September 2021)
In the previous version I only left one option that the urns could be destroyed immediately. Now both options are open: You can destroy the urn (with or without a ghost) or simply release the ghost without destroying the urn. In both cases there is no confirmation dialog. I also removed the blockage in the presence of the Grim Reaper. You can now release the ghosts and destroy urns, even if the Grim Reaper is still present.

How to install this mod?
Copy the *.package File into you Sims 4 Mods Folder (Documents > Electronic Arts > The Sims 4 > Mods). Please make sure to delete the old version of the mod!

Support me!
You like my work? Support me on my Patreon page. Thank you!

Release Spirit to Netherworld
Destroy
Back to download view
1 Comments / Replies (Who?)