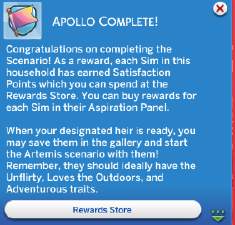 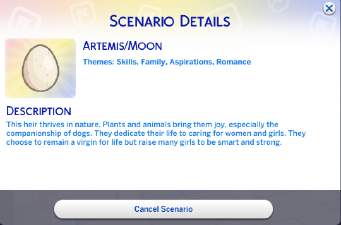 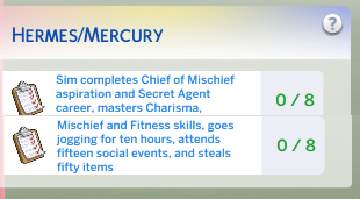 83 Thanks  Thanks     28 Favourited
As soon as I heard about scenarios coming into the game and the potential for their customization, the immediate first thing I thought was "this'll make tracking goals for complex legacy challenges a lot easier once people can crack it". With this in mind, here's a scenario that covers the first generation of the Greek God Challenge by, I think, maxismatchccworld, specifically the Apollo generation - since the goals for this legacy are, for the most part, quite tangible, it's a good place to start until I work out how to 'goal-ize' less obvious things like the befriending of wild birds and bunnies.

Due to the nature of scenarios and how they're coded, some goals had to be tweaked slightly from the original posting. "Complete aspiration and career" and "master 1 instrument of your choice" are unaltered and achievable. "Help children with homework every weeknight" is not something that's trackable more than once, unfortunately, so merely helping them with it once will tick off that criteria. "Many lovers" is clarified to three lovers, and "remain fit" is simply gained by maximizing fitness. But heck, I managed to make it so it has to be a specific aspiration and a specific career that's cleared, so there's progress there!

This post will be updated as I add scenarios for future generations and as older ones are refined. One of my long-term goals with this is to make it so the Sim you make/choose to play it has specific trait and aspiration requirements; for the moment, they're recommended but not necessarily enforced in CAS. Best of luck to all who play this thing!

Update 14/11/2021: This scenario now has failure states - one for Apollo getting married, another for them hitting minimum fitness. As of current, Artemis is still being worked on; most of the difficulty is in getting the game to recognize a maxed Fishing skill instead of all skills under a certain tag.

Update 10/12/2021: A few updates for the actual coding of the Apollo scenario: the goals themselves are unchanged, but the career/aspiration goals in particular should now be attainable without extra unneeded buffs coded into the reward traits (thanks to Kuttoe and those on the Sims After Dark discord for putting up with my incompetent butt). Artemis is in the penultimate testing stages as of current.

Update 12/12/2021: Artemis has been added! For the sake of space and ease, all scenarios have been/will be consolidated into one package. Foibles: Lumpinou's adoption module for the Woohoo Wellness thing, or any mod that affects adoption, for that matter, is likely to cause problems with one of the goals; if the adopted Sims aren't showing up in the Sim panels, that might be why. Edit: going into CAS via the likes/dislikes button and then back out usually fixes this. Further, I have not yet found a way to add a scenario_role to any new arrivals to the household, so rather than always having at least one dog, the challenge becomes keeping the dog alive until the scenario is over.

Update 17/01/2022: Hermes has now been added! Foibles: there isn't a fail-state worked in yet, since I'm not sure how the game registers that a social event has been rejected as opposed to completed. In the same vein, as with the NSB scenario, holidays/traditions count as social events as well.

Again, the inspiration and blueprint from which this was constructed is the Greek God Challenge, found here.