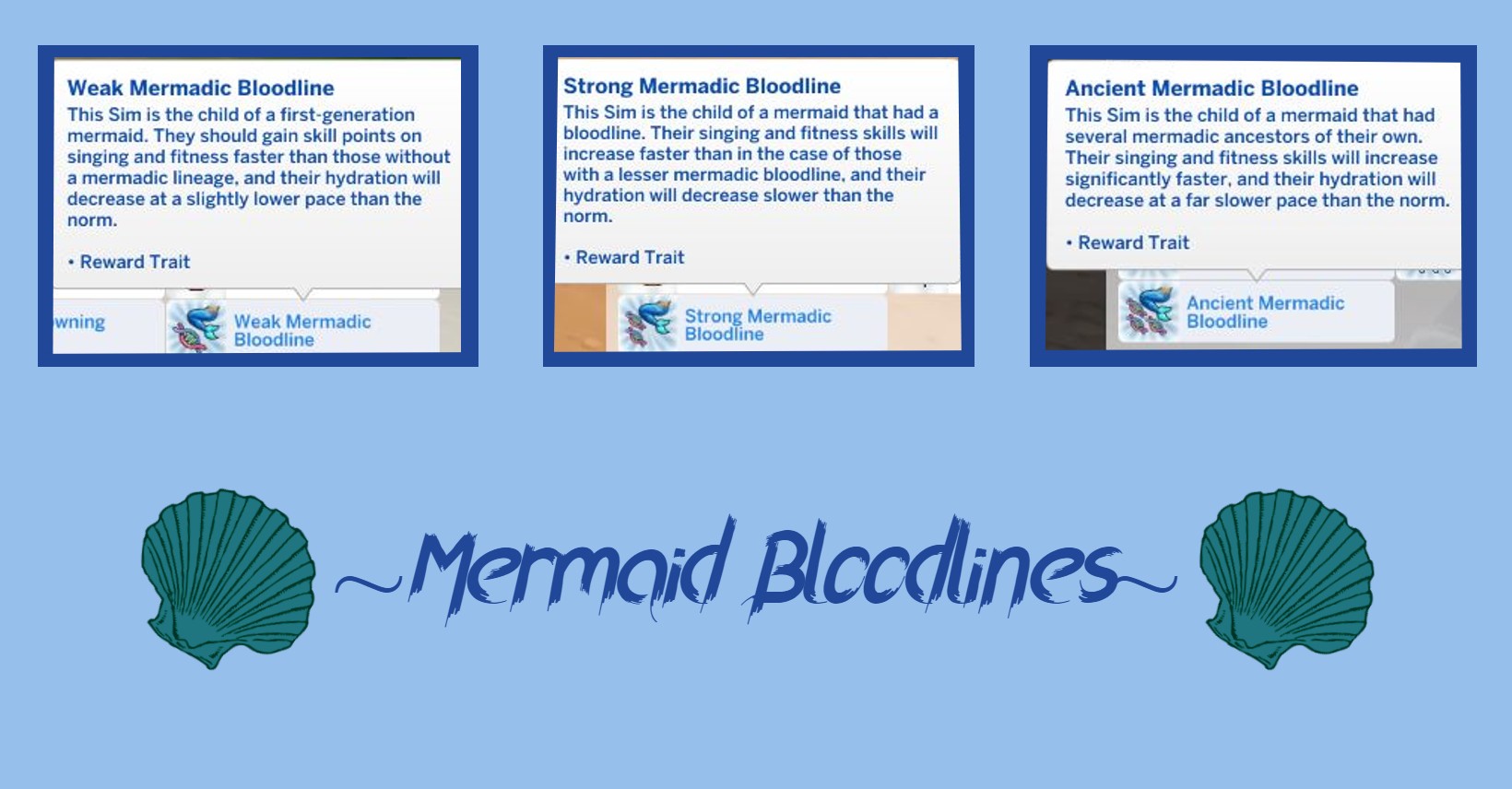 If MAL22's Trait Tracker Injector isn't working for you, here's the list of cheats to add the traits manually until the trait tracker works for you properly. It's working perfectly fine for me, but I don't like people encountering issues that keep them from enjoying the bloodlines so here they are.


Following up on my possibly excessive quest to give other Occults the same bloodline-traits treatment that Spellcasters get in the game, I present to you, Mermaid Bloodlines. Of course, coming up with perks for it was kind of a mess, considering how Mermaids are one of the least fleshed-out Occults in the game.

But before anything else: This mod requires MAL22’s Trait Tracker Injector, and will not work without it. (Oh, yeah, and sorry about that, but you need City Living to experience the full benefits since even though Mermaids sing in general, the singing skill isn’t base game).

So let’s talk about it. These Mermaid Bloodline traits consist of three traits, much like in the case of Spellcasters. They follow the same pattern, being in this case first-gen Mermaid -> Weak -> Strong -> Ancient. And while the traits themselves are custom, the inheritance rules they follow are the same as those of Spellcaster bloodline traits, though the Occult that triggers them in this case is Mermaid.

With that context out of the way, it was a pain to come up with perks for them, but here it is!

It’s as similar as I could manage to the original traits, but… I mean, no offense to mermaids, but their base perks make me sad, okay?

Considering I’ve made Vampire Bloodlines and Mermaid Bloodlines, I think the next logical step is Aliens (haha, betting I end up just going with a logic perk there /mediocre-foreshadowing). Though in that case, I’m even more stumped than I was when starting to figure out which perks to give to Mermaids.

I’d also like to eventually figure out a weakness to give them, like how Vampires have the sun and Spellcasters have overcharge. Makes the decreased risk gained from bloodline perks actually worth it then. Whenever I actually manage to get that to work, I’ll probably go with Hydration for Mermaids and whatever the equivalent of Brain Power from TS3 is now for the TS4 Aliens, haven’t played enough with those to figure them out. But soon!

This wouldn’t have been possible for me to do without Zerbu’s Mod Constructor, The Sims 4 Studio, and MAL22’s Trait Tracker Injector. They are exceptional programs and I thank their creators for making them.

This Sim is the child of a first-generation mermaid. They should gain skill points on singing and fitness faster than those without a mermadic lineage, and their hydration will decrease at a slightly lower pace than the norm.
Ages:

This Sim is the child of a mermaid that had a bloodline. Their singing and fitness skills will increase faster than in the case of those with a lesser mermadic bloodline, and their hydration will decrease slower than the norm.
Ages:

This Sim is the child of a mermaid that had several mermadic ancestors of their own. Their singing and fitness skills will increase significantly faster, and their hydration will decrease at a far slower pace than the norm.
Ages:

3. The package itself just needs to go on the Mods folder. Just remember you need the Trait Tracker Injector, or this won't do anything!


Please make sure to read it before commenting that it doesn't work. :)

3. The package itself just needs to go on the Mods folder. Just remember you need the Trait Tracker Injector, or this won't do anything!

Don’t redistribute gameplay mods without credit or link-back (because if you really want to share, just link back to the original since mods may be updated often)

You’re free to recolor/retexture any meshes but please credit

TL;DR: I’m not the boss of you, do whatever you want so long as you’re nice about it

If you want to translate my mods, feel free to but tell me so I can add the translation to the mod itself

(I can also gladly provide Spanish translations on request for instructions, mods, or anything related)