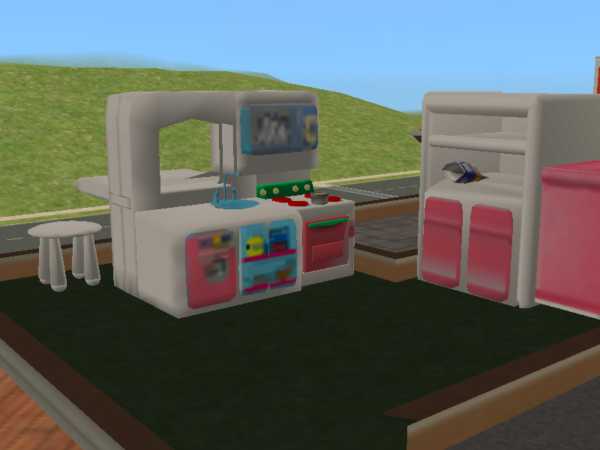 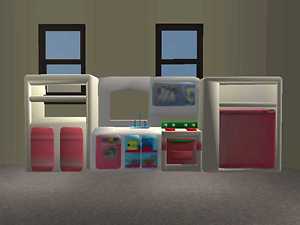 4,703 Downloads Quick download 727 Thanks  Thanks 21 Favourited 75,472 Views
Picked Upload!   This is a picked upload! It showcases some of the best talent and creativity available on MTS and in the community.

THE STORY: One of my legacy Sims, Cameron Jitmakusol (not the child shown in pics), is from a family of chefs and so I decided I'd just keep up with the tradition and have him become a chef as well. I've pretty much got him working on the toy oven every day after school and homework but I would always get annoyed with the way he would go ALL the way downstairs to eat the muffin. So then I decided I'd just make a little kiddie table and chair and put it in his room so he could eat there. Then I remembered an old kitchen playsets that I used to have when I was a kid. This one is a bit based on mine. It had a counter at the back so you could sit down and "eat" your pretend food after cooking it. So this way Cameron and all other Sim kids, such as Molly Testersim (shown in pic) don't have to trek all the way downstairs to eat their burnt muffins.

THE DETAILS: It's two parts. Well 3 if you count the stool. The oven is pretty much just the Maxis oven but I made it a smidge wider and longer to fit and also changed some of the motives (it's maxed out for fun and has a room rating). The table is the rest of the playset. You'll find the oven in the usual place and the table in Kids/General or Bedroom/Surfaces. The stool should be in Kids/Seating.

Note: I fixed the gap between the playset and the oven after I took the pictures so there is no longer a gap but it's not shown in the pics.

They're all recolorable and please do so if you'd like.

2005.7.20: Included a recolored set in white. I will probably be adding more pieces to this based on some suggestions so this might be moved to the Mesh Sets forum later on. Check back in a couple of days.

My policy on my uploaded work is that free means free. You are free to do with them whatever you like. If you want to include them in uploaded lots, go ahead. Recolors? Please do so. Include the meshes. I only ask that you let the meshes at least be free for download.

Description: Place the toy oven in the space provided. Kids can cook at the front and eat at the back. 3478 polygons.

Description: Beat the stink with more counter space and sinks in your locker rooms. Durable CounterFeet withstand corrosion from sweat and grime. A contemporary legless design means it's easy to clean all around. Here's a counter you won't find in mom's kitchen!