Back to download view
184 Comments / Replies (Who?) - 144 Feedback Posts, 32 Thanks Posts
Hide Thanks Posts for this thread (Show only feedback)
Page 6 of 8
Alunn
Lab Assistant
#126

Quote:
That blue box showing your installed script mods at the main menu only has so much space, so some mods that you install won’t show up there even though they are present and active in your game. Just because the mod doesn’t show up on the list doesn’t mean it’s not working.

As for events not triggering, it may be that the dice didn’t roll in your favor a few times. I had to play four days in game before I had my first event pop up.

I would suggest enabling Debug Mode as mentioned in the download description.
frecklebeans
Lab Assistant
#127

Quote:
hey lyra! im SO SO sorry to keep bothering you I just want to make sure this amazing mod is working properly for me beacuse I love it. So I turned on debug mode and tested and event and got these notifications:


Im ok with the mod taking some time to work, I just want to make sure nothing is preventing the events from firing off because I have SO SO SO MANY mods installed. Also should I turn the "init" option back to "true "
Lyralei

Ahh right that one! yeah In general it tends to not always be correct. I have mods installed that work perfectly fine, but the "Mods installed" view doesn't (always) pick up on those. So it doesn't necessarily mean the mod therefore will never work/hasn't been recognised

It's just that it only shows a certain amount of mods before it stops reporting of any new ones.

Other than your "no events trigger" all i can really say is try checking it with Debugger turned on (see: https://modthesims.info/download.ph...290#post5839290 ) and lets hope it will give you a little more info on why it's not triggering

it's a little hard reading the notifications since they're cut off partially, but using the in-code messages as a reference, the Money module should at least have fired?

Regarding the last message box with "test in general", I know it's not super clear

but basically, it means: "want to trigger a random event Right now?". However, be aware that by triggering this option (or clicking "true" rather) the script will go through the modules the same way as it would do each day

So, after using the "test random event" interaction about 5 times, it may mean you have to wait till all the cooldowns have cooled down.
My Patreon | My Tumblr | My Downloads | My Tutorials (Tumblr) | My Tutorials (YouTube)
puppywuv
Test Subject
#130

Lol, there is! but it does require nraas to add it though. See: https://www.nraas.net/community/Mas...ons#Add-Moodlet

Then you simply look for the pneumonia moodlet and voila!
My Patreon | My Tumblr | My Downloads | My Tutorials (Tumblr) | My Tutorials (YouTube)
kixleart
Test Subject
#132

Tried out the latest version last night and got one event to successfully fire, but the rest of the time debug mode said that the "event test failed". I imagine its working as intended, it just failed a couple times due to other factors like my sims' circumstances at the time. IIRC it tried to fire off the "family staying over" event for example, but couldn't because the household I was playing didn't have any family members outside of the household.
Extraneo
Test Subject
THANKS POST
#133

Is there a feature that lets you trigger random event on request (without doing this automatically)?

For example, the mod stays in 'sleeping' phase but I can ask it through menu to trigger a random event.
sulsulsimmie
Test Subject
THANKS POST
#134

I love this mod and didn't even mind the few errors it popped up with because of the value added and it looks like this new update fixed those small issues. Thank you for this!
simrune
Lab Assistant
THANKS POST
#135

The rumor with text shall sim get a "cat, dog or hamster" does it actually result in another pet being added to the family?
Lyralei

You can technically do this if you turn Debugger Mode on

(See: https://modthesims.info/download.ph...290#post5839290 ). If you click the sim, you'll see an interaction that says "Test Random Event". A popup will show and will say "Do you want to test general event?". Press "true" and it will pick something randomly, but the cooldowns will still be considered.

I may in a later update include a variation that simply picks anything... just note that when the people testing it did this, they did had some chaotic gameplay happening

(Like accidentally getting 3 sims killed in the span of one sim day) ;p

I should probably specify this in the FAQ part, as you're not the first one asking this

but I decided to not do this due to the fact that I know plenty of other simmers who are extremely specific about which sims should get pets (or want no pets in their world, etc) So for now, it doesn't really do anything

Sometimes it's also because of the cooldowns, although at the beginning of running the mod at the start of a new save, this shouldn't be an extreme problem. But you can always tweak the cooldowns!
My Patreon | My Tumblr | My Downloads | My Tutorials (Tumblr) | My Tutorials (YouTube)
ann_dorf
Test Subject
DELETED POST
26th Jul 2022 at 4:29 AM Last edited by ann_dorf : 27th Jul 2022 at 5:42 PM.

I'm so excited to try this out! Thank you for making this mod and keeping the community going

@ann_dorf Thanks for the bug report! I will say though, I am interested why it threw a list empty error there

do you have any of the modules installed at all? I assume so, but just to double check.
My Patreon | My Tumblr | My Downloads | My Tutorials (Tumblr) | My Tutorials (YouTube)
ann_dorf
Test Subject
#140

I have everything installed except for death, disasters and disease. Don't want any unnecessary drama haha
kocoyo
Test Subject
#141

i got this error this morning idk what i did wrong https://postimg.cc/DJ3nnLtk
Golden_Fountain_Pen
Test Subject
#142

So I have installed the latest version of this mod and I have not encountered any bugs until today. A townie called my Sim to give away a pet, and I clicked "Sure". The message then says that he has given my Sim some items in the family inventory. I looked into it and it turns out the townie had given me a "Missing object instance 319e4f1d:00000000:000000000098aade-". At least he had given my Sim the pet, which was a chinchilla.
Lyralei

Oh nice! Thanks for the heads up! You were supposed to get a cage for your chinchilla, but I'm guessing I made a mistake along the way... Will look into it

It's very rare for this to happen, but basically what it is, is that no appropriate rumor could be found for your sim, but the code decided to try firing itself anyways. It's nothing game breaking or mod breaking, though I'll check it out!

LOLing so hard ????
LOL so I'm guessing this mod is the reason for this?? I don't know if I wanna either laugh or knock all this stuff overr 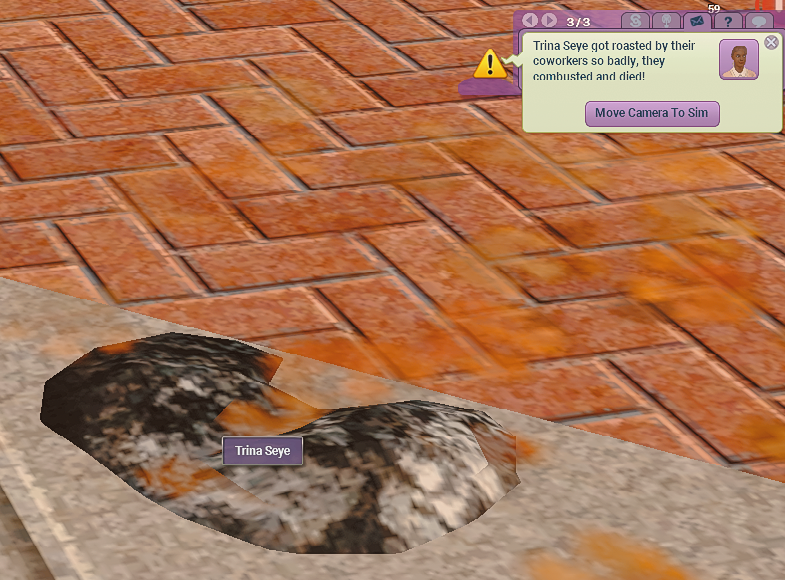 I cannot get this mod to fire for me. I have NRAAS mods installed, but despite playing for weeks I can't get anything. I even downloaded the most current version. Help?!
Lyralei

Hey @RRSIMMER ! I decided to write a quick "What to do when it's not firing" part in the description, as the debugger mode can provide you a lot of info on why it's not doing anything.

If you need a bit more help on understanding the debug messages, feel free to ask here of course!

Swedish translations
Great mod! I translated the strings for you to Swedish, if you would like to add them to the official mod. I have tested them.
Attached files: