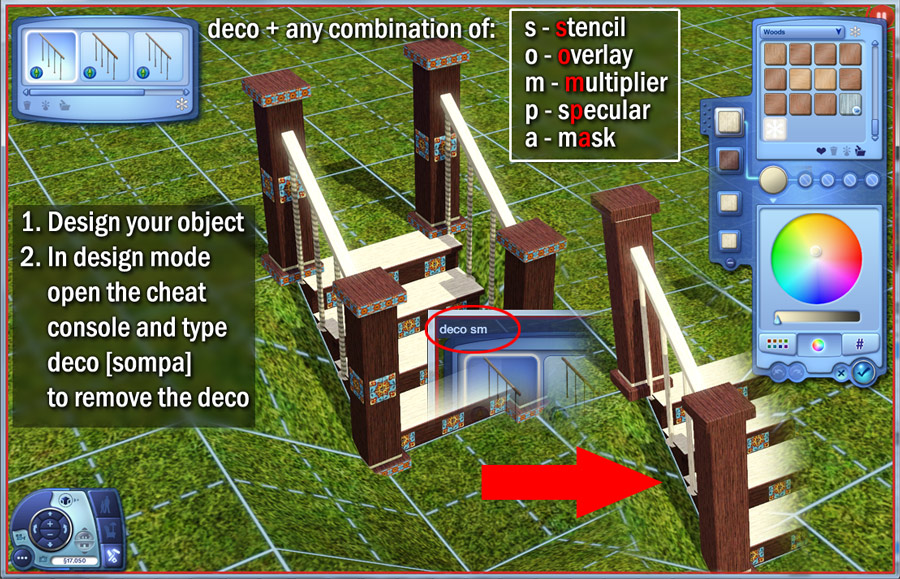 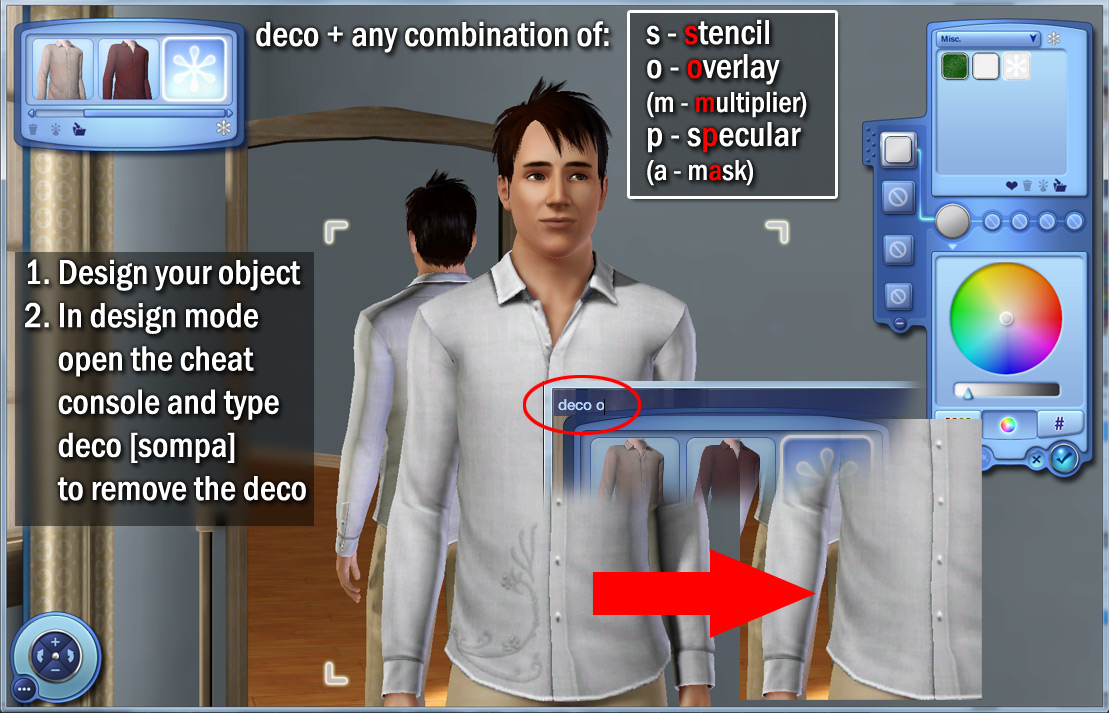 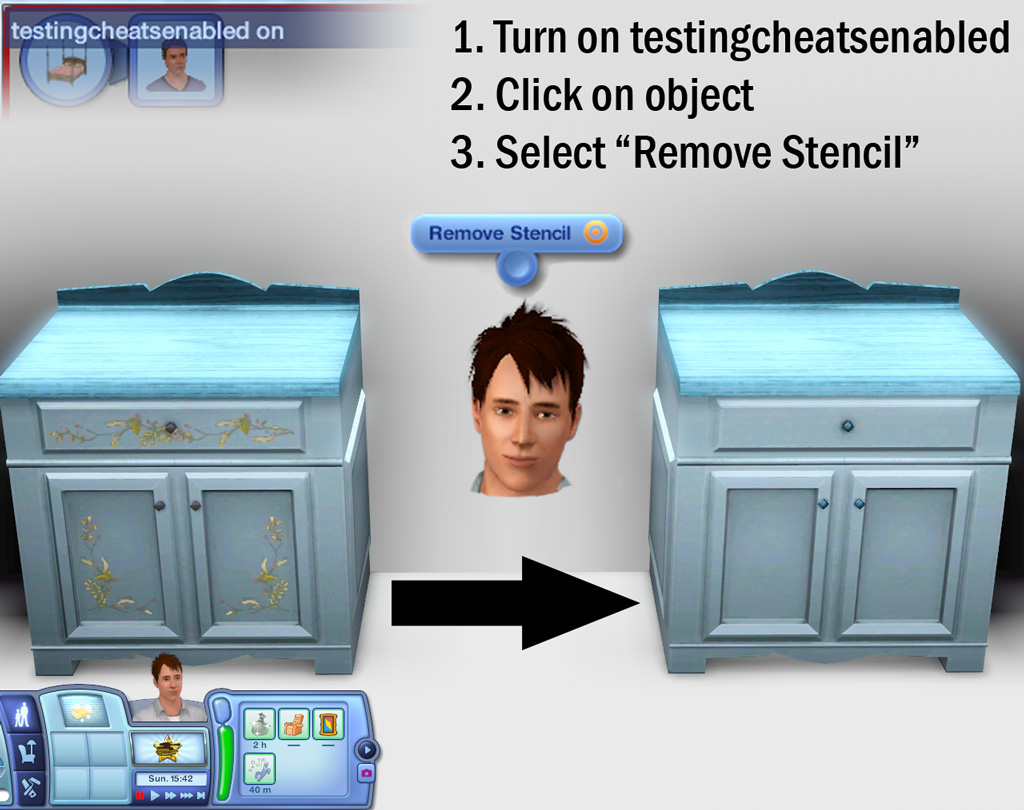 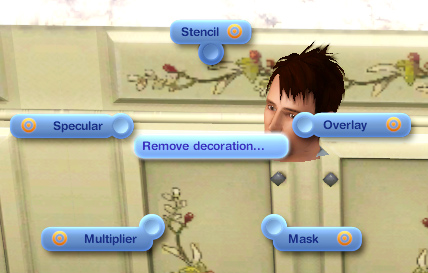 See: Game Help:TS3 CC Basicswiki for a full guide!
Back to download view
243 Comments / Replies (Who?) - 97 Feedback Posts, 138 Thanks Posts
Hide Thanks Posts for this thread (Show only feedback)
Page 1 of 10
Hellfrozeover
Tartan McBadgerface
THANKS POST

Thank you so much! I'll be trying this in about five minutes!
velocitygrass

@Hellfrozeover: Thank you. I'd love to hear if it works as expected.
AnnaIME
Field Researcher
THANKS POST

Oh, I wish I could click "Thank you" more than once!
alexpilgrim

I tested it in game with a few store items (I realized afterwards that the african table already had a stencil-free preset, durr, but this was using your mod) and a couple of my own custom items and it seems to work just fine!

(You can find the rug here and the small painting here )

Great job, thank you for sharing!

Love it, thank you!!
K9DB
Forum Resident
THANKS POST

You are a GENIUS! Just what I always wanted! Thanks!
velocitygrass

@alexpilgrim: Thank you very much. The usefulness really depends on the item. E.g. the pinboard probably makes little sense without overlay, though maybe for post-apocalyptic/grungy looks it could work. The little rolling box and the hexagonal endtable look a lot more neutral though. I'm really happy that this will open up some objects for wider usability. Thanks for the feedback and the example pictures.
alexpilgrim

@velocitygrass You're welcome! Yes, I realized as I was taking the screenshots that the usefulness on some decorative items may seem more limited (though, who knows what one might want to use it for, right?), but I couldn't find in the CC I have in my game other items (chairs, counters, whatever) with stencils to show as examples... On the other hand it might make a whole lot of custom paintings castable as long as what's behind the stencil/overlay is an independent channel.

@alexpilgrim: Oh, that wasn't a criticism of your selection. I also had a picture in my example. I think in most cases the area behind overlays belongs to one of the existing channels, but even that opens up some opportunities if you don't mind CASting the frame along with the back.

And as you said, one never knows when it might come in handy. I'm always blown away by the creativity of builders in the community, so I'm happy to contribute this little tool.
ukbucket
Test Subject
THANKS POST

Brilliant!! Thanks for sharing

This is too good to be true, I never think that would be possible, ever, in my game. I'm just in awe of your creativity and talent. Thank you.
tambailey2002
Field Researcher
THANKS POST

thank you very much. appreciate you sharing your talents and creativity with the sims world!!
Mehrlicht
Scholar
THANKS POST

Wow! You have made my day! Thank you so much for making this genial mod. So many ea objects are ugly because of their stencils and will now become nice.... Thanks again.
zigersimmer
Top Secret Researcher
THANKS POST
#15

This is just *so* awesome. There are so many things just don't use because I hate the stencils.
Corylea
Scholar
THANKS POST

Wonderful! Velocitygrass, I don't know what we'd do without you.
clown1995
Test Subject
THANKS POST
#18

hi, could you upload the sim on the screenshot, please?
divalbw2

Thank you so much! This is so very useful and should really be a decorating option for all objects with a stencil. I wish however, it would work on the Pharaoh's Stone Railing. I tried it on this first but it didn't work. Maybe that design is not a stencil? It did work on the Rustic column. Good job!!
Srikandi
Eminence Grise
THANKS POST

Seriously, though, this is BRILLIANT

There are a million mods that remove stencils from things (I made one as my first test of S3OC when it came out), but who wants to have to get a new one every time a new object is put in the game?!

Never even occurred to me that an approach like this could work, you're a genius :D

Edit: Been testing it in my game, mostly works exactly as expected! A couple of comments:

Some objects didn't have the "remove stencil" option where I would have expected it... one frameless oriental painting for instance (was just messing around, obviously as you said you don't really WANT to remove stencils from paintings

Stained glass windows become solid wood, obviously, like the door example in your upload... ok for doors, not so useful for windows, I understand why this is though

However, on the windows with soap bubble decals from Town Life stuff, the bubbles stayed solid but the bubble stencil was removed, making em recolorable, which is great.

I found a couple of objects where apparently nothing happened, but the "remove stencil" option didn't go away... they're complex and/or scripted objects, might there be multiple stencils on them? Not sure. Extraordin-AIRE-inator lifetime reward object, Princess and the Pauper Treehouse, pet toy crate, Class-E Bookcase. Tried "remove stencils" multiple times on each of these with no change. Not a biggie, just thought you'd like to know

Anyway, I think this is possibly the best TS3 mod EVER, since it multiplies the number of objects I am able to use in my game without fear of kitsch

BTW, question... any way to undo it short of re-buying the object? If I understand how you implemented this, probably not, but just checking. The effect it had on the turtle play table was not exactly what I expected

What a fantastic idea, thank you!
sfwmd825
Test Subject
#23

Quote:
I could be wrong, but if I've read this correctly, then you would have to CAST the object and select a stenciled version in order to get it back. You could also save the stencil free version in there as a preset as well.
Iggysaurus
Lab Assistant
THANKS POST
#24

Holy shit, this is AMAZING! I can get rid of a bunch of my destenciling mods now (some of them are even standalone objects, causing dupes in the catalogue), not to mention, I don't have to go hunting for destenciling mods for new objects anymore! This is a huge, game-changing mod.

And by the way, I love all the mods/apps you create! You make stuff that allows noobs like to me to mod my own game; you make us self-sufficient! Thank you, velocitygrass! :D
MiniMimi
Top Secret Researcher
THANKS POST
#25

Amazing! How is that even possible?! Are you a code god or what?
Oooh why didn't you upload this wonder last week, that is, before I install a gazillion of un-stencilized game and store stuff! *facepalm*
Off to try your mod and track down all the now useless files to remove, YAY!