This mod is fairly straight-forward, it turns on cas.fulleditmode for you automatically so that you'll never have to enter fulleditmode before opening CAS. This saves you from having to re-enter it every time you travel, switch households, or return from CAS.

This pairs nicely with my Always TestingCheats True mod, which you can get from my cheat wiki or from MTS.

Simply open the download and copy the .ts4script file to your mods folder.
Once installed, just use cas as you would normally and the full edit mode will always be unlocked.

NOTE: If you haven't enabled script mods yet, you'll need to open your game and go to Options > Game Options > Other > Script Mods and make sure it's checked. Apply and restart your game.

If you'd like to support me and my future mod development, please refer to my signature or profile. 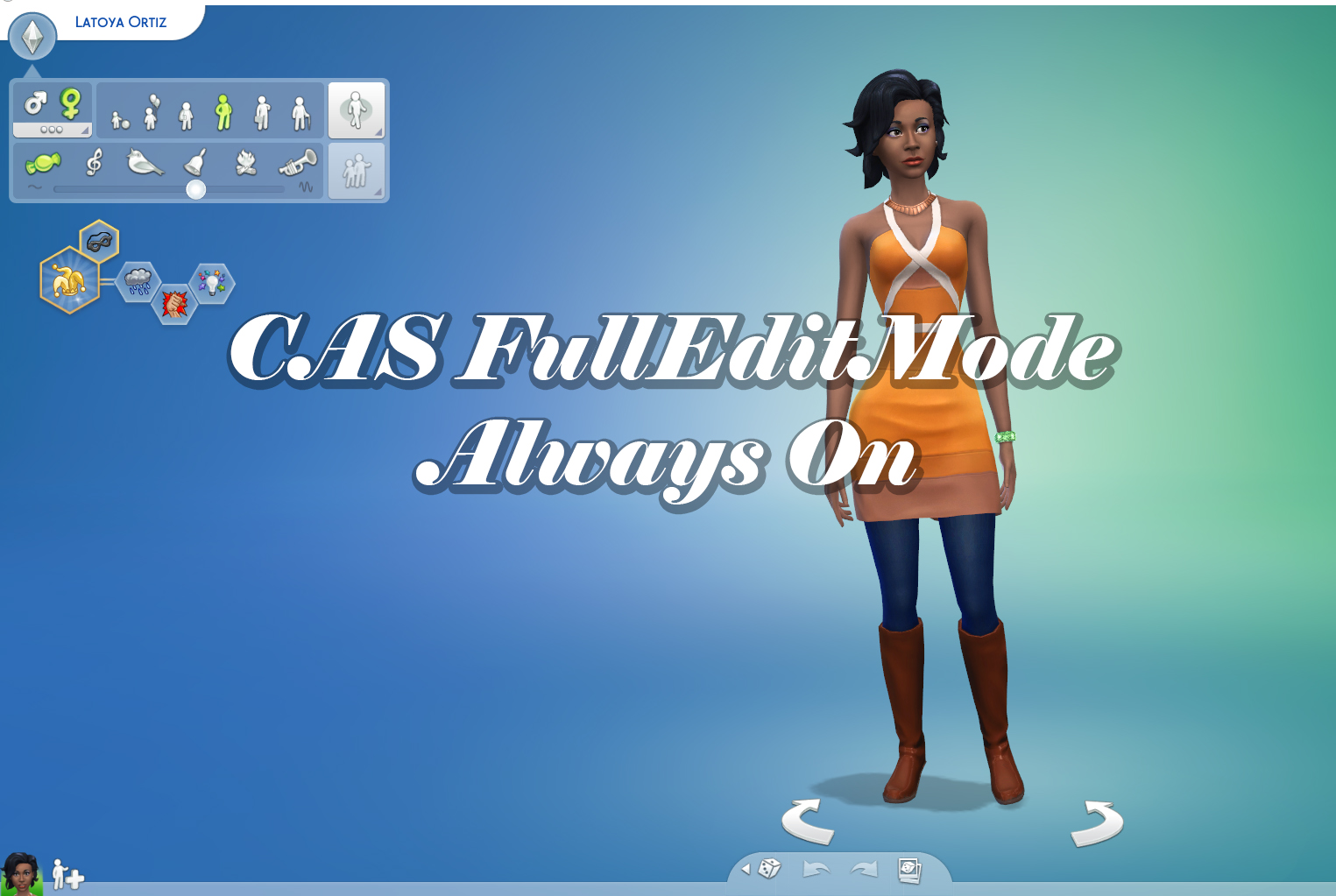 Built with Game Version: 1.27.80.10
Key: - File was updated after upload was posted
Need help with downloading or installing content? Click this link!
Don't forget to Thank the creator after downloading! Use the Thanks button located above the screenshots above.
Basic Download and Install Instructions:

Need more information?
Back to download view
125 Comments / Replies (Who?) - 57 Feedback Posts, 60 Thanks Posts
Hide Thanks Posts for this thread (Show only feedback)
Page 2 of 6
MyCoolSims

Strangely enough, this mod doesn't work for me and I'm not sure why. I boot up the game with this mod installed but when I go to edit a household in CAS mode from the neighborhood screen it's clearly not activated and I still have to manually input the code beforehand.

Any ideas why this could be happening?
mummy_001
Scholar
THANKS POST

OMG you are the legend!!!!
Dipper
Test Subject

So the fact that you made this a scriptmod kinda confirms for me that most CAS fundamentals are going to be in that zone. Did you happen to see when you were in there the spot that requires an age of Teen+ for a vampire to make a Dark Form? Would it be easy to make a mod that changes that to Child+?
TwistedMexi
Field Researcher

I see what you're getting at but that's not really a true statement. The client commands (same as entering a cheat in the game) is the part that's exposed here, not so much anything to do with CAS directly. That and buildBuy are both obscured considerably more than the rest of the game.

If I find a way to modify the CAS constraints I'll let you know.
TwistedMexi's Cheat Resource || Base Game Mods || Expansion Mods
All my mods and cheats are entirely free, but if you'd like to support me, you can buy me a coffee.¯\_(ツ)_/¯
I'm also now on twitter and you can find me on Patreon!
Lunamist2
Test Subject
THANKS POST

Gee, why can't EA think of these things?
Thank you for doing it for them.
brocato912
Test Subject
THANKS POST
#31

Is this MOD 1.25 compatible? I can not upgrade to 1.26 for now.
TwistedMexi
Field Researcher

In theory yes, as my similar mods didn't require changes for 1.26. All I can say is try it out. It won't harm anything if it doesn't work.
TwistedMexi's Cheat Resource || Base Game Mods || Expansion Mods
All my mods and cheats are entirely free, but if you'd like to support me, you can buy me a coffee.¯\_(ツ)_/¯
I'm also now on twitter and you can find me on Patreon!
corradogirli
Test Subject
DELETED POST
9th Feb 2017 at 6:29 PM

This message has been deleted by corradogirli.
corradogirli
Test Subject
#34

not working for me .. dont know why
gazania
Mad Poster
THANKS POST

It's cool to just make the changes I want to make without a cheat. Thank you!
Petr54
Lab Assistant
#36

[MyCoolSims]Strangely enough, this mod doesn't work for me and I'm not sure why. I boot up the game with this mod installed but when I go to edit a household in CAS mode from the neighborhood screen it's clearly not activated and I still have to manually input the code beforehand.

Any ideas why this could be happening?]
[corradogirli]not working for me .. dont know why]

This mod doesn't work for me alsow.
Thérèzsc

So apparently this mod doesn't like to be put into a subfolder! The mod wasn't working, so I decided to do some testing to see if one of the other mods I had was conflicting with it. Took out all but the testingcheat and fulledit mod, started the game and saw that testingcheat mod was showing up in the little Mod pop-up window but fulledit mod wasn't. Closed game, moved fulledit mod out of subfolder and placed in main modfolder, started game again and both mods I had in folder now shows up in Mod pop-up window. If I now shift-click on sim and choose Modify in CAS, fulleditmode is unlocked. Hope I've been somewhat helpful and haven't confused the heck out of anyone with my rambling. Thank you for making this mod TwistedMexi, it was seriously needed.
tobeyr
Test Subject
THANKS POST
#38

It works!
You are amazing, this works great, along with the original mod. I originally posted it didn't work because I forgot with script mods you paste the zip file, not the actual files in it LOL. Thanks for all of your hard work!!!

Mod is in the Mods folder, without subfolders. Still it does not work. Sorry for my bad English.
Thérèzsc

Is it zipped or unzipped? I have it unzipped and it works, someone else here has it zipped and claiming it works. Try either option to test. Also, have you enabled script mods in the game options menu? And do you have the required Resource.cfg file in Mods folder? What happens when you hold down the Shift-key and click on the Sim you want to edit. Does Modify in CAS option appear?
Petr54
Lab Assistant
#42

Quote:
1. unzipped
2. Options included. All modes work well, except for this.
3. I have the required Resource.cfg file in Mods folder
4. Modify in CAS option appear when I hold down the Shift-key.
Sorry for my bad English.
Thérèzsc

So when you pick Modify in CAS option it doesn't let you do any advanced editing to sim? Cause if not then I'm all out of ideas.
Hope you get it sorted out somehow.
Sorry I couldn't be more helpful
erfadk

Mine to...I can only do it one time,then I need to restart the game again to load the cheat.
OriginID: vandmelonen
My creations in the sims4 gallery
GingerNana
Lab Assistant
THANKS POST
#45

Thanks for this. I have a terrible memory and have to keep googling how to do this cheat.
summer roses
Test Subject
#46

EA probably thought a cheat for that was enough

Mod doesn't work completely.
With this mod I still can't change the character attitudes and the regulator of fatness/fitness isn't there.

EDIT: I also downloaded your TestingCheatsOn/True Mod from the other website and now everything in CAS is unlocked.
I let this post stand here for otherones to read who have the same problem.
THANK YOU !!!

Thanks so much, that frees up one of my macro keys on my keyboard. Woot!
foreverbauerfan
Test Subject
THANKS POST
#49