by treeag Posted 8th May 2008 at 7:23 PM - Updated 29th Aug 2008 at 6:15 PM by treeag
100 Comments / replies (Who?) - 25 Feedback Posts
This is a Maxis Recolour which means that it is a recolour of an item that already exists in your game. Please check the Expansion pack requirements to see which game pack it recolours.
Picked Upload! This is a picked upload! It showcases some of the best talent and creativity available on MTS and in the community.
This mod will enable most of the creatures' skin in Bodyshop and CAS. Skins included are Alien, Mannequin, Zombie, Werewolf, Plantsim, and Wilt Plantsim, all skins are available for all ages from toddler to elder. 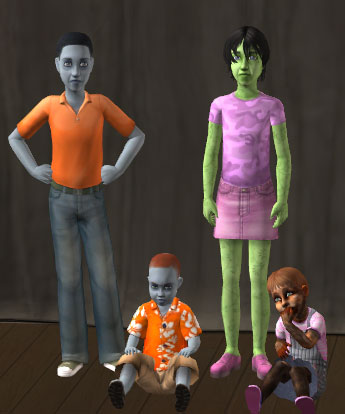 There's 2 versions, choose only one :


CreaturesSkin.zip :
All 6 skins won't have the CC star, they'll have appropriate EP flag instead and the delete button IS disabled. However, in CAS you'll have to activate the debug mode to get them.

Mind you that when you activate the debug mode, you'll find 2 zombie skins. One is mine and the other one is Maxis'. My version is available for all ages from baby to elder while Maxis' isn't available for babies, toddlers and children. Same applies to the mannequin skins.

CreaturesSkins_CCSTAR.zip :
You won't have to activate the debug mode to select these skins, but they will have the CC star and the delete button is NOT disabled. Be careful not to delete them as you will corrupt your game by doing so.


Remember to choose just ONE, you can't have both since they will conflict with each other. 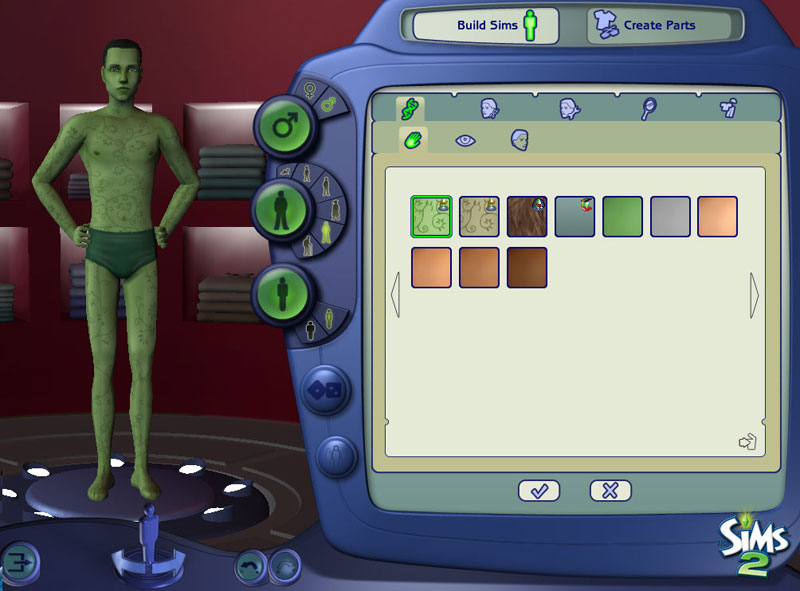 You DO need the corresponding EP for the skins to show up.

Thanks to TashaFaun and Lord Darcy for the help in fixing the naked state for the plantsim and werewolf skins. You'll want to redownload. Sorry it took me so long, in fact if it weren't for the 2 people mentioned earlier I might still haven't fix it. Sorry!

I added the infants' skins so the game won't crash when a sim with these skintones have a baby. They'll have a nice little baby with appropriate skin instead. 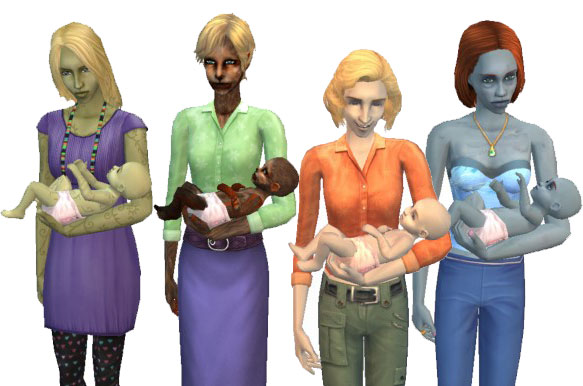 Additional Credits:
irenny, for requesting this mod. Actually she only requested the alien one, but I did all the skins anyway.
Tags: #alien, #zombie, #mannequin, #werewolf, #plantsim, #wilt, #skin, #creatures, #occult, #unlocked

Back to download view
100 Comments / Replies (Who?) - 88 Feedback Posts, 8 Thanks Posts
Hide Thanks Posts for this thread (Show only feedback)
Page 2 of 5
hishe

I'm experiencing a problem with the mannequin infant skin. My female mannequin sim is just about to have her baby when I load her lot, but just when she's about to have it, that wicked "Application has crashed" message keeps appearing just as the baby is being delivered, even after I put in the mesh that I got from CreaturesSkins_CCSTAR.zip. If anyone has an idea what could be going on or what I might've done wrong, could you please clue me in? I can't tell you how grateful I'd be.
treeag

Have you redownload the file? The first version doesn't have the infant skin.
GhostontheMoon

I don't know what you mean by first version. I did, however, delete the content I got from the first CreaturesSkins_CCSTAR.zip I downloaded and put in my Downloads folder since it didn't work. I redownloaded the same zip file, took the content, and put it back into my Downloads folder--but it's still no go. When she gives birth my application still crashes and terminates.

Edit: I also downloaded the other zip file, but that didn't help either.
treeag

This is weird. My sims can give birth just fine... Are you you're using my skin and not Maxis's mannequin skin? Both look identical but Maxis's version of the skin do cause crash because it doesn't contain any infant skins.
GhostontheMoon

Oh noo, I am using Maxis' skin! Gaaah...oh well. I can afford to delete her lot and remake her since she's reproducing asexually and was recently made anyway. I haven't tried out your skin yet, but if it works out well for you and others then I'm sure I'm good to go. Thank you so much for helping me!
Duddits

Love these, thanks so much. My neighbourhoods are so much more colourful now. :D
Blutsauger

hello, I'd like to thank you for your work, I find this skins very useful. but I've got one problem. as for now I've only played with the werewolf skin and the problem is, when my sim goes to take a shower, his clothes don't disappear. he does the spin, theoretically he's naked but what the? at first I though that might be the cc shower, but nope. oh, and the clothes disappear for infants and children when changed/bathed. they stay only children up. I also have cc werewolf skin. any idea what's up?
cheers

To be honest I have no idea. I'll try to look if it happens in my game too sometime this week but I really think that's not supposed to happen.

The game look at these skins as CC skins. But instead of CC, they pull the textures directly from the game files. This is not a flag-changing type of unlocker so it really shouldn't cause any problem.

I understand the general idea, so I was surprised too that something doesn't work as it should. it's not a big problem though, just a little annoying.
anyways, the only skin I haven't replacement of is the mannequin one, so I'll try it, although I should also probably try the other ones. skins I have are from http://www.sexysims2.com/showthread.php?t=171120 this thread, similar found on MTS too.
take your time, I appreciate your work and your help

EDIT: I made a family of two women [zombie and mannequin] and one guy [either normal or wilted plantsim, forgot] and only that guy didn't properly undress to take a shower! still, kids [girls] of the werewolf-skinned guy I mentioned also didn't undress, so it's not a question of gender I guess. I'll try with the female plantsim-skinned and male zombie/mannequin then.

so. male mannequin undressed normally, female wilted plantsim did not, male zombie did, female werewolf did not.
to summ up: there seems to be a problem with werewolf and plantsim skins.
and I am so confused :D
treeag

Ok. I think I know the problem. So the broken skins are werewolf and plantsim, right? Only from teens and up? Toddler and children undress just fine?
Blutsauger

um, children are broken too. only babies and toddlers are being undressed properly, and yes, werewolf and plantsim

Yep, I know what's wrong, it's just I'm pretty busy currently so I don't know when I'll be able to fix them. At least it's not a fatal bug...

Sorry about that.
Blutsauger

it's okay, glad you could find out what's up. I'll be waiting for some update, take your time and thanks :D
Manneh
Test Subject

Sweet, the only default skintones i can stand :D
jujajulchen
Test Subject
#41

If I get for example a plantsim or have an alien baby, would it get your skin or maxis' one?
treeag

ok. Thanks! And what's about the genes? Is it always dominant?
WorkYourMagic

can you unlock the genie skin too please?
SoopySoop

I used the boolProp cheat and sent the Create-A-Sim into debugging mode, and when I had the mother get pregnant with a default skin tone guy, the game crashed.

Anyways, sweet. Thanks for the upload.

If we get a new Expansion pack, do we have to re-install this?

The Genie has the colored Skinparts on his Clothing Texture.
genkochan
Test Subject
#47

What do you exactly mean by 'didn't work'?
genkochan
Test Subject
#49

Do you have the corresponding EPs installed?