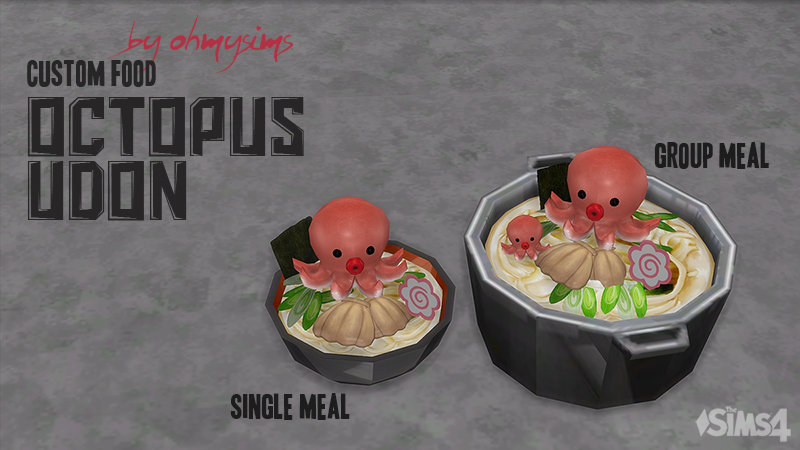 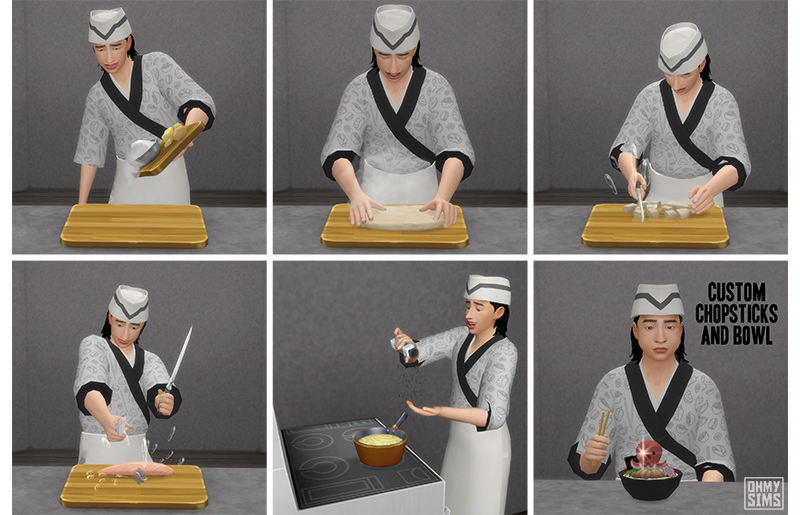 This is custom food that sims can prepare on the stove.

How to use this recipe:

Localisation:
Now this recipe is translated by all the language supported. But still, feel free to correct any mistake and add suggestions!

Need more information?
Back to download view
47 Comments / Replies (Who?) - 16 Feedback Posts, 28 Thanks Posts
Hide Thanks Posts for this thread (Show only feedback)
Page 1 of 2
Chazzzy
Lab Assistant
THANKS POST
#2

This is ... much too cute to eat. But in the case of this dish, I can absolutely understand why my sim would want to make endless photos of their food before starting to eat. =)
Thank you very much!
_Thundergirl_
Lab Assistant
THANKS POST

Haha...the octopus is too cute to eat! Always love to have versatile food in game!
Heymon
Test Subject
THANKS POST
#6

Love your custom recipe. Food is one of the most versatile project The sims series can handle endlessly and you give us a quality one.
parkjoonho

BTW Octopus Udon right form in Traditional Chinese is 章魚烏冬面 not 章鱼乌龙面
&the last one Tempura Shrimp Udon must be 天婦羅烏冬面 not 炸虾乌龙面, ←this is sth simplified and incorrect.
Mendota
Field Researcher
THANKS POST

Thank you! This will be good for my adventurous sims. Not into this sort of thing myself, but after all it is the sims.
eternal0572
Field Researcher
THANKS POST
#10

I'm gonna recommend this dish at my restaurant. Thanks
pmj
Test Subject
THANKS POST
#11

Oh my gosh, this is so cute! Thanks so much!
ohmysims

Thanks! Someone on Tumblr gave me both traditional and simplified versions and I chose simplified one. I'll update the file soon.
shellka
Test Subject
THANKS POST
#14

your job is amazing!!!!
HarVee
Mad Poster
THANKS POST

Pretty hard to eat something that looks so cute.

I can just imagine that octopi moving.
marn3999932
Test Subject

Keep these up and simmers will be able to open a restaurant entirely made of your foods!
kalyen
Test Subject
THANKS POST
#19

It doesn't show up in my game. I added the custom foods package to the Mods folder. Do you have to have something other than the basic game? Maybe it doesn't work on a Mac?
ohmysims

No, I've seen all my custom food works both on PC and Mac. The troubleshooting below may help.

1. Halfway through cooking the interaction will be canceled and the sims will wave their arms around complaining there isn't enough space.
>>>> Make sure your game version is up to date. It should be at least PC Version 1.20.60.1020 / Mac Version 1.20.60.1220 (the Dine Out patch.)

2. I updated my game, but [Cook Custom Meal] interaction still won't show up from stoves/fridges.
>>>> Make sure your custom interaction script is also the latest version.
>>>> The ts4script file can go only one layer deep with folders by default. In other words, it should be either,

As I already stated the package is already in the Mods folder and with the latest version to go with the updated game. The only difference I can see is that the package doesn't have the '.ts4script' on the download package. Would that keep it from showing up in the game?
ohmysims

this is sooo cute loove it
mdbedard
Test Subject
#25

You were correct, it was missing the script. Works fine now. Thanks for helping .