by Diwtay Posted 22nd Nov 2013 at 3:56 AM - Updated 27th Jan 2014 at 1:32 AM by Diwtay
31 Comments / replies (Who?) - 8 Feedback Posts, 17 Thanks Posts
Picked Upload! This is a picked upload! It showcases some of the best talent and creativity available on MTS and in the community.
Gilgolem Castle - Playable Tomb Adventure 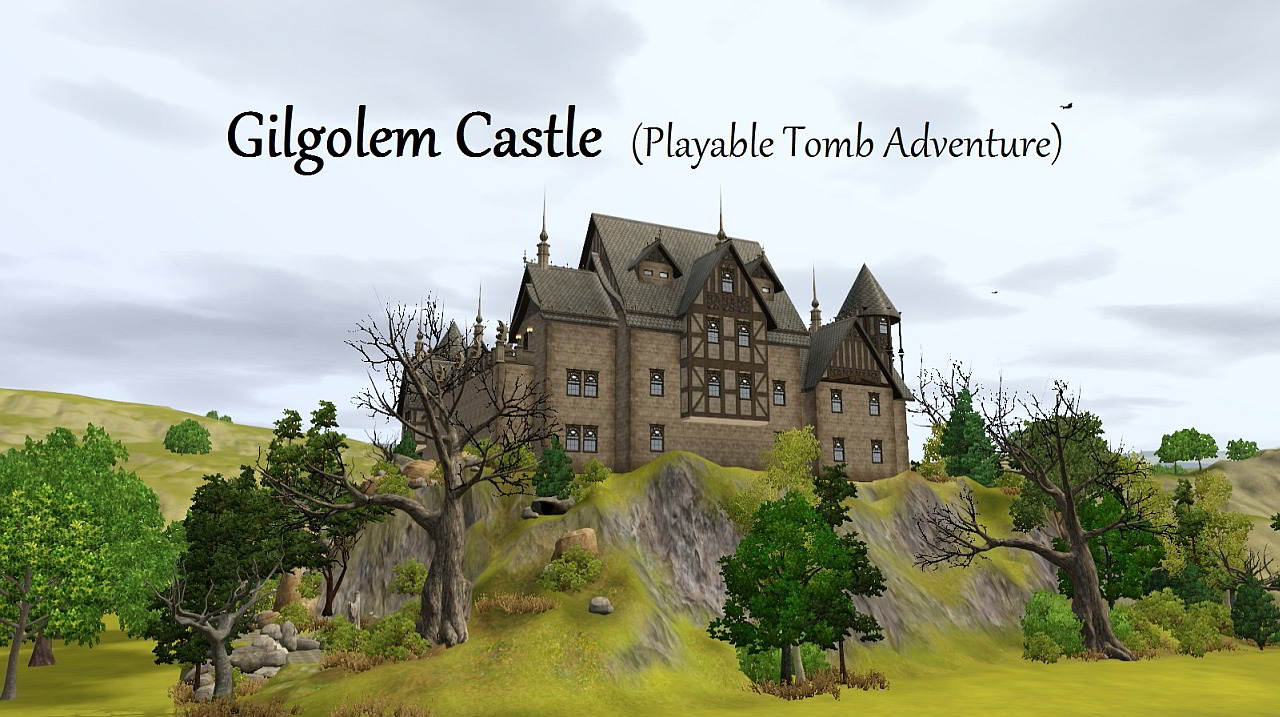 NOTE:: Gilgolem Castle has been thoroughly tested to make sure that all traps are working. That being said, I do not recommend placing two copies of this lot in the same world. Doing so causes an error with the warp wells. I successfully killed at least one sim while testing because of this. Also, Gilgolem Castle is a HUGE lot with plenty to render. Please make sure you are playing on a system that can support the graphics.

If anyone encounters a pathing problem please let me know so I can correct it; and as always, if there are enough requests I may upload a non-tomb and store free version of this lot for those who wish to use it as a residential lot.

UPDATE 11/23/13: I have added a second copy of Gilgolem Castle. This version does not require any store content.

Built with Game Version: 1.63.4.024
Key: - File was updated after upload was posted
Need help with downloading or installing content? Click this link!
Don't forget to Thank the creator after downloading! Use the Thanks button located above the screenshots above.
Quick Guide:

If you need more info, see Game Help:Installing TS3 Packswiki for a full, detailed step-by-step guide!
Back to download view
31 Comments / Replies (Who?) - 9 Feedback Posts, 21 Thanks Posts
Hide Thanks Posts for this thread (Show only feedback)
Page 1 of 2
Diwtay

Gilgolem Castle Floor Plan Screenshots: If you do not want to spoil the tomb exploration please skip this post.

Gilgolem Castle Additional Screenshots: If you do not want to spoil the tomb exploration please skip this post.

This is SO beautiful! The landscape is fantastic, I want to go hiking through it so badly - it looks that real! So, so well done.

I don't download Sims 3 houses because I have tons of cc. But your lot is so amazing that I have to add a huge Thank you for this masterpiece. It's so well balanced, so perfectly built, so beautiful that I am lost in admiration.
hellaufbegeistert
Test Subject
THANKS POST
#7

I love your Gilgolem Castle it is beautiful !!!
lewisb40
Mad Poster
THANKS POST

It is gorgeous, looks like you took lots of care with the details and an enjoyable tomb. Would this work in WA worlds too? That is the only time I get my sims into tomb raiding. :D
Luktop
Test Subject
#9

I really love it great work, but could you maybe upload a residential version, please?
Diwtay

Thank you everyone. I am particularly proud of this lot.

Quote:
To answer your question lewisb40 Gilgolem Castle is designed to work in the WA worlds. It was built for and tested in France. When you download this lot it has been saved as a "secret tomb". To initially place the lot you will need to pre-load either France, China, or Egypt in build mode and convert an empty 64 x 64 lot into a "secret tomb". Once the lot is placed, reload your normal world and save. Only then should you travel to the world where you placed the lot with a sim. The reason why you need to place the tomb lot before you travel is to force all the loot to spawn. In testing previous tombs I learned that some tomb objects (ie: one time loot, treasure chests that require keystones to be opened and chains on doors) do not spawn correctly unless the lot has been converted to a "tomb" classification and then loaded in game.

Also, once the lot has been initially placed and loaded for loot, it can be converted from a "secret tomb" lot to a normal community lot and placed in your sims home world as well.

For those who do not know how to do change the tombs lot type here are the cheat codes that were used:
crtl-shift-C (to bring up the menu)
testingcheatsenabled true (to enable the cheat codes)
Then select "Secret Tomb" from the Lot Type drop down menu on the empty 64 x 64 lot
Place lot

To convert Gilgolem Castle from a "hidden tomb" lot to a normal community lot place the lot using the cheats typed above, then
crtl-shift-C (to bring up the menu again)
enablelotlocking true (to allow lot to be edited)
Click on Gilgolem Castle as if you were to buy/edit it. There should be a picture of a closed lock. Click on the closed lock and it should change to opened.
Then select "Community Lot" from the lot type drop down menu
Save the converted lot to your menu and place as normal in your home world
Kumulus
Lab Assistant
THANKS POST
#11

Wow! this is really beautiful job you did. Details on the images are just fine. Thanks for this beautifull work.
fxchrfxchr
Instructor
THANKS POST
#12

Vlad would have loved this! Great job!
nanatoana
Lab Assistant
THANKS POST

Wow! It's even more beautiful than I imagined!
murfee
Mad Poster
THANKS POST
#14

Thank you for your very helpful post. I will be trying that. Downloading now.
aceofbades
Test Subject
THANKS POST
#16

This is fantastic. I can't wait to crack it open. I'm wanting to use it as a home for my new legacy in Dragon Valley.
Vera_J
Lab Assistant
THANKS POST

It looks amazing! Thanks.

I have added a second copy of my lot for those who do not have the required store items.
simaholic63
Test Subject
THANKS POST
#19

This looks fantastic! I can't wait to try it out. I might even put it in Midnight Hollow. It looks like it would fit perfectly there. Thanks for taking the time to create and share such a wonderfully detailed tomb.
Tigerdyhr
Instructor
THANKS POST

Yay you, for thinking of us without store sets

Thank you, that was extremely considerate


Oh and the residential version will not be including any store content.
xLoesje123
Test Subject
THANKS POST

Right now, I don`t have the Sims installed to my computer but I had to download this awesome lot!
Thank you so much for sharing.
Tahera
Test Subject
THANKS POST