by Wicked_poppies Posted 7th Jun 2009 at 1:18 AM - Updated 7th Jun 2009 at 12:05 AM by Wicked_poppies
48 Comments / replies (Who?) - 20 Feedback Posts, 3 Thanks Posts
Picked Upload! This is a picked upload! It showcases some of the best talent and creativity available on MTS and in the community.
Dorothy Gale is an orphan from Kansas who lived with her grandparents, Aunt Em, and Uncle Henry. Her age is unknown, but she is usually depicted as being around pre-teen (probably 10-12 if you ask me). Almost everyone in the world has heard (or rather “watched”) her story told, and despite being over 100 years old, it still manages to touch people of all generations with its timeless appeal. So, rather than tell you the same story again, I thought I might share some things with you guys that you might not already know (both about the film and the book):


The “ruby slippers “where originally silver in the books, but where changed for the film because the studio wanted to “take advantage of the chromatic possibilities of the new Technicolor film process.”Further reading about the “Ruby Slippers” can be found here.

Dorothy’s name closely mirrors that of Baum's own niece, Dorothy Louise Gage, (purposely done in tribute do to the fact that she died as an infant). However, Matilda Electa Joslyn Gage (infant Dorothy’s grandmother) provided the launching point for the characters core personality. Dorothy Gage was laid to rest at Evergreen Cemetery located in Bloomington, Illinois. For more info on the character Dorothy Gale, click here. 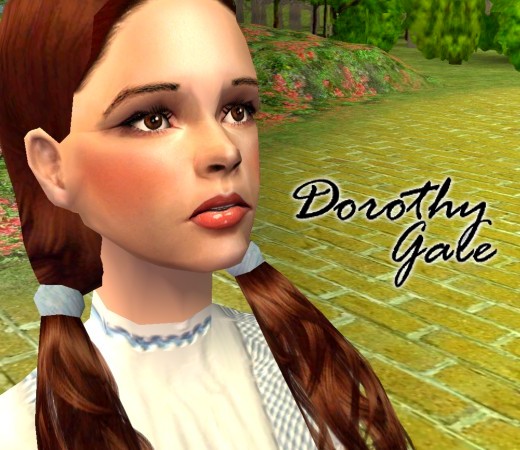 While L. Frank Baum was the creator, and therefore the first to write about the character Dorothy, he is followed by many other writers offering their own interpretation of the Land of Oz, and Dorothy herself. Most notably (and in my option the best) is the famed “Wicked” series, which focuses on the life and times of the “wicked “witch of the west (aka: Elphaba). In the series, Dorothy is portrayed at worst as being young, and naive. Her motive for seeking the Wicked Witch is not to kill her, but to apologize for killing her sister. It also bridges the gap from the classic movie, to the book, by making the slippers appear both silver, and ruby at times. You can find more about the Wicked series here. 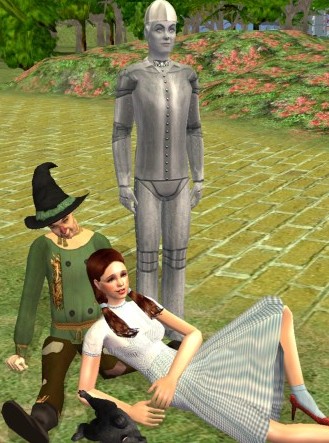 This is a hybrid version of Dorothy, fashioned mostly after Judy Garland’s appearance in the classic film “The Wizard of oz”. Again, I say “mostly”, because while we worked extremely hard on getting her to look just right, she obviously isn’t perfect. However, I feel that while we didn’t completely hit the nail on the head, we were able to capture a bit of the genuine innocence Judy so perfectly brought to the part many years ago. Also, to be frank, Judy Garland is a pain in the ass to sim. LOL She is a hybrid, because without Vera_Marina’s original version of Dorothy, and here immense help along the way, I would never have gotten here. I kind of think of this Sim as our ‘child’ of sorts. I would like to specially thank her for all of her help, support, and allowing me to use her original creation as a launching pad. She is truly a very talented creator (far more than me, obviously), and if you’ve been living beneath a rock, and have never seen her amazing Sims, you can find them here. As far as the outfit goes, I think it’s pretty close replica of the real one. The reason I say that is because I worked almost as long on the dress as I did on the sim, paying attention to the details. Also, I don’t know why, but I felt that it was important for me to use pictures of the real dress and shoes from the film as much as possible. I guess I feel like it makes it a little more authentic. 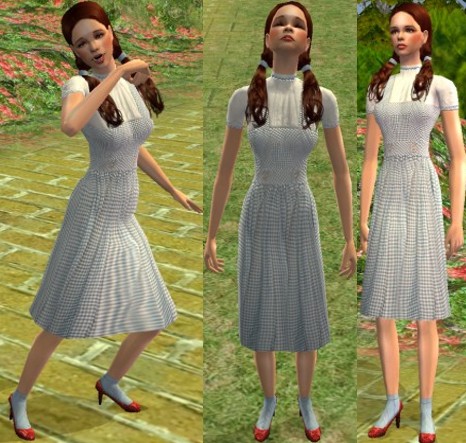 You need this hair mesh for her to show correctly in the game. I made the recolor, so you don’t have to download anything but the mesh from the link, because the recolor is included with the sim. The mesh for the dress is included from Liana Sims 2. She has a lot of other amazing content, so you should really check it out sometime if you get the chance. The lipstick is a recolor of one of Bruno’s amazing lip colors (I basically just stuck some of his teeth on it). I love me some Bruno when it comes to make-up and unmentionables, so if you haven’t, you should check him/her out too. Hmmmmm… Let me think…… anything else? Oh, right! How could you possibly have Dorothy without Toto? This is my favorite one so far.

I would also like to thank everyone who has helped me on the CFF. Get ready, because I’m going to list everyone this time.

Thank you SO freaking much guys and gals… You’ve been the biggest help, even if I didn’t always like what you had to say. LOL I think that’s it…… Enjoy!

Back to download view
48 Comments / Replies (Who?) - 43 Feedback Posts, 3 Thanks Posts
Hide Thanks Posts for this thread (Show only feedback)
Page 2 of 2
TigerSoundNet

Click the "Related Pages" tab and BINGO, there is The Tin Woodsman of Oz by Wicked_poppies (To your daughter, a lot of us still enjoy the happy world of Oz, btw.)

I did a little search for you two and here's the link.


"You with this lovely baby blue/green huge eyes and this evil touch...couldn't be more adorable" - My Vera
kopple36

Has anyone brought up any ideas about a "Land of Oz" with a bit of field for some poppies and the Scarecrow and perhaps a small section of nice woods for the Tin Woodsman and the Cowardly Lion to roam around in?

Right now, Wicked_poppies' Dorothy is enjoying this very nice castle.
Château Amer at TSR (Btw, it is non-ep, and it has a LOT of custom textures done by Christine.)

Something of that very high standard, placed at the back of a 6x6 area like I described above, might truly become a small "World of Oz", in its own special way? (Now, if we could just find a proper "Yellow Brick-road" texture.)

***
I removed my off-topic Land of Oz idea, that I just failed with, anyway.

That sounds nice... No, you're not realy off topic. However, if you do build your lot, or even just get it started a little, you can post your pics of it and get feedback over at the creators feedback fourm.
I don't take requests. :-)

This message has been deleted by TigerSoundNet. Reason: Off-topic and I failed anyway
rebel_d0ll
Test Subject
#31

your characters are incredible and a true masterpiece!!!! Thanks for sharing them!!!!
missMSBplayer

Not only on Dorothy but the whole crew (LOL rhymes)!

And I'm glad we all pitched in a little

I'm so very excited to download all of your Oz creations

She is really nice - well done

My Avatar? It's Corto Maltese - a pirate but a gentleman! His name stands for honor, honesty, confidence and the truth: THE TRUE FACE OF TSR
beautifullyflawless

She is beautiful.
I love her look and it does
resemble her a lot.
I am such a huge fan of the movie and
the book also.
Most great movies were once books.
(())Pass the ribbon around if you know someone that
//\\has survived, died, or is living with cancer.

Amazing job. She's beautiful. The pictures are really nice, too. I love the yellow brick road and flowers behind the characters. Too cute!
Thanks for sharing.

This looks just like her. In fact, it looks so good, that I don't think we are in Kansas anymore.
An error has occurred. Unimplemented trap.
Wicked_poppies

Again, thanks so much for all the nice comments guys!
I don't take requests. :-)


"You with this lovely baby blue/green huge eyes and this evil touch...couldn't be more adorable" - My Vera
JAKINCOL

Your work is AMAZING!
missMSBplayer

She's beautiful, Wicked! What a fantastic job you did!
Call Me Miss, or MSB

I am NOT taking requests, sorry! But if you have any suggestions, I will take them!

Do you have to have the dress mesh? If so please tell me, its not showing up in my game.
usakoneko

Your Dorothy sim (as well as the Tin Man, Scarecrow, and the Lion) is absolutely gorgeous, and it makes me so happy to stumble across her! I hadn't even thought about making Wizard of Oz sims, but now I know that I can't resist! Thank you so much, you've done an absolutely fantastic job with them! <3
LolaLeischen

Thank you for all your creations. They are all beautiful

Yes, you must have the mesh, but it was included with the sim, so it should show up under adult female everyday full outfits.
I don't take requests. :-)


"You with this lovely baby blue/green huge eyes and this evil touch...couldn't be more adorable" - My Vera
cometdansyr
Test Subject
THANKS POST
#45

You Are Freaking Amazing!!!! This Is The Best Thing Ever!!!
harmony120
Test Subject
#46

i love her
Lady Steelheart
Test Subject
THANKS POST
#47

She is Very Lovely and thank you again for sharing!!
ElenaCarin
Test Subject
THANKS POST
#48

I love it! Which liliana sims mesh is it?