Mikael was a fresh graduated lawyer, working for a small law firm owned by his uncle.
They only did small cases but he didn't mind at all.
Mike was not a very ambitious guy, he never was.

He already had a decent job, a beautiful wive, and a small house of their own.

He met Tomio 3 years before in an east asian art exhibition, she was a painter, apparently
she was going to study in the same university where Mike was.


Mike just started his career as a lawyer while Tomio was still finishing
her final semester at the university, when everything collapsed for him.

there were a bunch of guys breaking in their house, while he was having a nap after came home from work.

he woke up with a terrible pain on his face, so he got up and went to the mirror on top of the sink to see what's wrong with his face
and saw a skinless kind of ghost stared back at him.

at the darkest hours of that night, Mi_To was born
and people started to hear story about a mythical serial killer who chooses gang members
as his target. a survived victim describe Mi~To as a scary looking demon who disguised
as a beautiful girl. 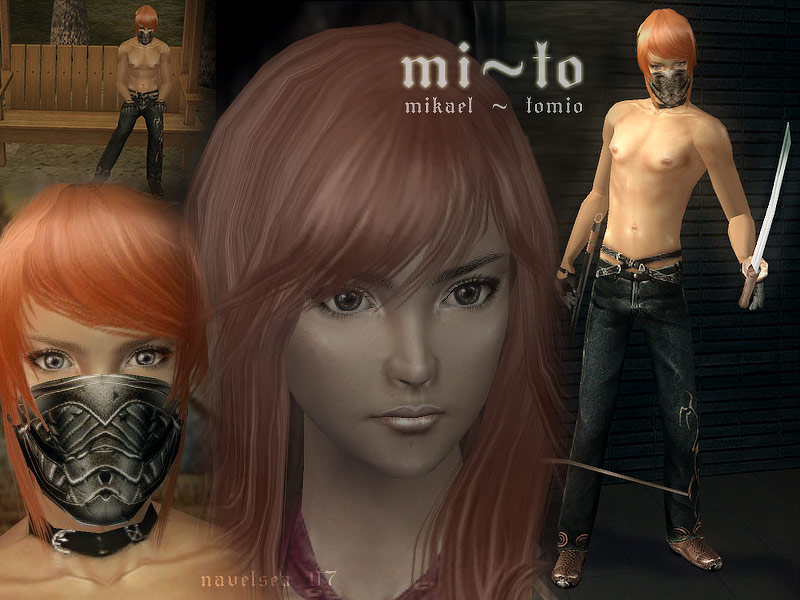 about the sim & custom contents:
he is saved as an adult male sim,


the clothes (maxis recolor)
are two pieces casual, his gloves, choker and belt are with the pants,
and for the top it can be replaced with any T-shirts or other tight fit shirts.
they are maxis recolors done by me, no need for meshes and they're from the original TS2

the hair (need to download mesh)
is my recolor/ re-texture of Sshodan's abbysian hair, need to download the mesh here:
http://www.modthesims2.com/showthread.php?t=169579

the skin (included)
is my F-INevo3 wet edition, specially made for him and included

the eyebrows (included)
is Teru's eyebrows, I really like the texture and how they're placed closer to the eyes,
thanks much Teru!
http://www.modthesims2.com/showthread.php?t=244936

the makeup
his eyelashes/liner is Anva's "Lash for all race" which is my favorite lashes lately
because I really like the under eye lashes texture, the placement is just perfect
thank you Anva!
http://www.modthesims2.com/showthread.php?t=251034
(included)

his eyeshadow is from Raonsims (not included)
www.***

Back to download view
29 Comments / Replies (Who?) - 24 Feedback Posts, 1 Thanks Posts
Hide Thanks Posts for this thread (Show only feedback)
Page 1 of 2
renagade676

Oh my god! I loved the story! It easily creeped me out.

Incredible! The sim, the story...everything is just amazing. Thank you!
verenaheu
Alchemist
#4

- The Resturant At The End Of The Universe, Douglas Adams -
bageldogs1
Lab Assistant
#6

Does the guy have boobs?

This message has been deleted by Canoodle. Reason: This is not WCIF
Navetsea

boobs? I didn't change any mesh for this sim. or did you mean the texture of the fat body?
The rest of my skins can be found in my blog
http://navetsea.blogspot.com
Ultimah

The guys look like they have boobs... no offense.
FINAL FANTASY VII
{ SOLDIER-02 }

Ah, the perils of sleeping with a cigarette in your mouth. Don't do it, kids.
shadowlite
Test Subject
#13

Where did you get the sword and sword holder?
aillae
Field Researcher
#15

I believe you can get the sword/sheath at Rosesims2. Yes.

And back on topic, the story is brilliantly done, with beautifully taken screencaps to complement with the tragic story, and the sim is beautiful, too. A wonderful job! The mask is incredible! Such excellent details you've put into it. I will happily take this sim home. Thank you so much.
HAIR REQUEST: Long Curly Hair (i.e.: 01 & 02) for MALES (bld/br).
PAYSITES... BE AFRAID. BE VERY AFRAID. >8D
http://paysites.mustbedestroyed.org/
slayers_next
Test Subject
#16

Heh, disguising as a female XD. Anyway, great Sim, I look forward to adding him to my town.
larsson1970

My Avatar? It's Corto Maltese - a pirate but a gentleman! His name stands for honor, honesty, confidence and the truth: THE TRUE FACE OF TSR
California_Rock
Test Subject
#19

im not so into jesus & god.. but, it's just a thing i always say HAPPY ... to.:D
[/LEFT][/CENTER] HiP HopPeR aRe ArOuNd ThE wOrLd, BuT PuNk`S aRe OnLY iN tHe SpEcIaL lAnDs!
Marmalade Ho
Test Subject
#20

He looks great; and I love the story you had to go along.
BrEaKsYsTeM

I was listening to the end of "Papa Roach's Last Resort" why reading this story. It matched! This would make a great movie! =D
ValkyrieCane

This message has been deleted by Dollzy.
cherryblossom12321

I think you should publish it. LOL! It is a very good story. The sim is very awesome!


These recolours may or may not be endorsed by Navetsea.