Picked Upload! This is a picked upload! It showcases some of the best talent and creativity available on MTS and in the community.
Update: I've fixed the issue with the carpools not showing up! Redownload and enjoy! - Dec.20'07

I had this vision when the theme was announced. I was going to make careers out of Fairytales. A 'good' career path, a 'evil' career path, and separate teen and elder supporting character career paths, a University major and pet careers. Custom outfits with new meshes, new custom carpools, this vision was freaking amazing.

I started working toward it, but it was so HUGE and required SO MUCH research. The meshes got me bogged down and work slowed to a crawl. Then school caught up to me. My final projects (like a final exam except way more work intensive and not BS-able) were due Yesterday, Today, and Tomorrow. After putting in a lot of work writing up the careers and all the chance cards, I didn't want to just drop the project today. Its a tad late, and definitely not 'finished' but it is now in a playable form. Earlier today I had just planned on submitting the outfits I made, but it was really upsetting not being able to show all my creative writing work. So one very long afternoon later, I had one working career. No job outfits attached, no career reward, no custom carpools. But it is a career and it is playable. I'm also handing off the outfits I made in case you would like to play with them as well, but they aren't attached to the job. Ok, enough with Reality, let's talk Fairytales!

The Fairytale 9 to 5's career path has separate jobs, descriptions, chance cards, and outcomes for men and women. Now don't start screaming equal rights at me, the pay, requirements for promotion and chance card rewards are IDENTICAL. The only difference is the text. This gives you two career paths for the price of one!

Now, before anyone asks why isn't Cinderella on the same level as her Prince, let me explain how each character got to be where they are. Each character was rated by how 'cushy' their part in their story was. Cinderella is cooking and cleaning and putting up with rude stepsisters while Cinderella's Prince is hanging out in his palace holding balls for young eligible ladies. Jobs that suck more are lower.

PLEASE don't hit the ignore button when a chance card comes up. If you want to 'play it safe' the 'Stick to the Script' option is usually less risky. Though, you also stand less to gain from that option. This isn't to say however, that it is always a better choice, it just how adventurous you are feeling. Also, don't be afraid of demotions, there are only 2 times when that happens and you only go down one level. I always hated chance cards because I'd come home without a job if I got one wrong, so this ISN"T the case here. The chance cards are the 'climax' of the fairytale, if you don't play them you are robbing the fairytale of its story. I've also edited them to show up A LOT so you hopefully will be able to read them all by the time you get to the top. 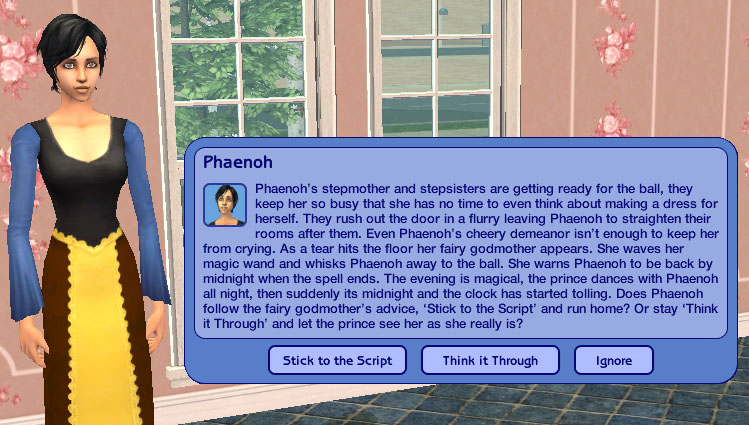 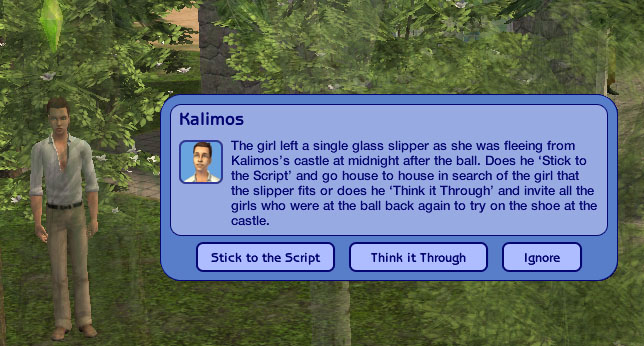 The career is technically complete, meaning it is fully playable, chance cards work, daily pay, required skills and friends, all that good stuff is there. Outfits are not. Carpools are all Maxis (oddly enough making it base-game compatible).

I've also included all the outfits I had finished. I had originally planned on making 2 adult tracks, the heros and the villians, so thats why there are some witches outfits. I had also planned on doing a teen track and an elder track, and those were all nursery rhymes, hence Little Bo Peep and Muffet. The teen dress is a custom mesh based on a Maxis Custom Dress. The adult dress is the Cassandra Goth goth dress made to not taper and flair at the bottom. 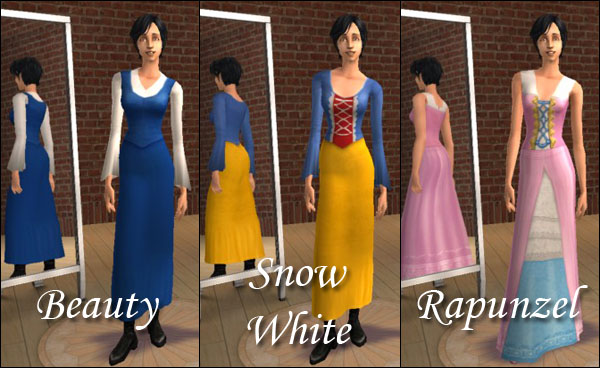 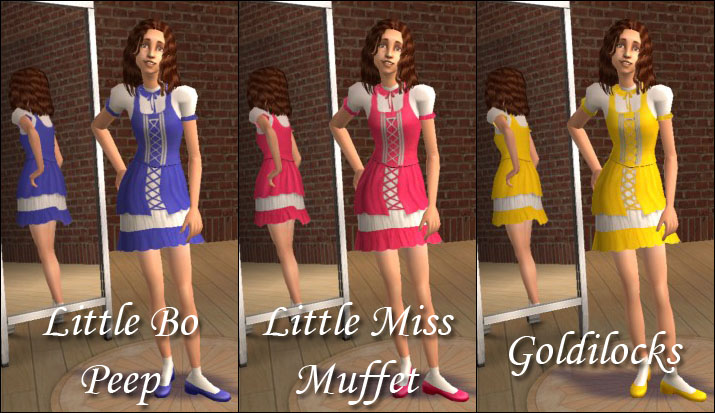 The final .rar is a Word document containing all the job titles and descriptions for all the career paths I had originally planned. Chance cards are not included, I had only written them for the one I got done. I'm sorry I wasn't able to fulfill that dream I started with, but in the time frame of a month, I should have started smaller to begin with. If I didn't have my final projects due the same day I might have gotten this in sooner and/or more complete. This project was just too big, I'm burnt out on it. I'm pretty sure this is as far as I'll be taking it.

If anyone is playing it and finds any bugs with it, let me know, I did all the SimPE work in a day so I didn't have time to properly test it.

P.S. I love reading comments, leave me a couple?

Additional Credits:
My boyfriend who suggested that I still go through and turn it into a career instead of just 12 outfits.
Tags: #fairytale, #career, #job, #jobs, #princess, #prince

What an adorable idea! Nice work!

It is a very cute and loveable career! thanks,

You. Rock.
That is all. :D
Sophie-David

My goodness - this is quite wonderful!

haha this is really cute!

cute,really cute career actually,it has a story,i think its the collest career ever
My MTS2 Downloads

This is really god. Thank you and good luck!
blueforred

(It's sad you probably won't finish it, though. I'd offer to help, but I know nothing about careers or meshing!)
princess-kt
Test Subject
#14

Please continue to develop this idea! It's fantastic, perfect for one of my neighbourhoods.
Petchy

Sweetheart, a fairytale career is already quite cool! You don't have to do all that other stuff in order for this to be a very worthy addition to the game! Thank you for making it, and good luck with those final projects!
I made some mods for The Sims 1 -- yes ONE :-) -- which you can find at http://corylea.com/Sims%201%20Mods%20by%20Corylea.html
igloolik

I would love to see you finish it all up even if it isn't in time for the contest. it would be a lot of fun.
michaelajand

These are brilliant! And I agree with Corylea, it's a great addition just as it is!

You're right, this would be an epic undertaking, well done for this, it's a really good idea!
Phaenoh

Well, school is over for a month for me, I might think about finishing up the outfits. Though, depending on what the next contest is and if I have time to finish up some of my other projects, I might not get around to it for a while. We will see.
New! Fully Renovated Pleasantview!
Like my work? Help me make a difference!
Jynxthehobbit

That sounds SO cool! I LOVE fairytales! *squeespasm* although I really like Peter Pan and The Little Mermaid, they are ALL equally awesome! xoxoxoxoxo
Remember SILENCE=DEATH.
If you're not saying what's on your mind,
you're as good as dead!
CBP
Test Subject
#23

These look absolutely wonderful, and a whole lotta fun. Thanks so much!

Quote:
My sympathies...I so know the feeling. Personally, I think that some good BS goes a long way - teachers should keep that in mind.

Ah, I like your new title much better! I look forward to playing this one, but I just realized that I don't know when that will happen - I rarely have a chance to play the game anymore! In any event I was looking forward to seeing your entry, and was not disappointed!

Such a good idea, I can seew you put a lot of hard work into it.
Liquid Sims - Sims Graveyard - Personal Site