Recolors for BibloFile and CinderBook books (and bookcase recolours too)

by plasticbox Posted 7th May 2008 at 1:14 PM - Updated 12th Oct 2009 at 4:31 AM by plasticbox
78 Comments / replies (Who?) - 25 Feedback Posts
This is a Maxis Recolour which means that it is a recolour of an item that already exists in your game. Please check the Expansion pack requirements to see which game pack it recolours.

Picked Upload! This is a picked upload! It showcases some of the best talent and creativity available on MTS and in the community.
Requires the CEP.

Four recolours for the books in two of the cheap bookcases, with more detail and in less horrible colours and much less ugly in general than the blurry disaster that comes with the game. They're also more logical, because now at least some of the books that sims can pull out of the bookcase are *in* the bookcase in the first place.

The actual book texture is the same for both bookcases, only differently mapped: it's four sets of books, made avaliable for two bookcases each, so you're not going to miss anything no matter which bookcase you use.

The book sets are roughly themed -- one has more cookbooks, one has more tacky pink novels, and one has a bit of everything -- but not so much so that you couldn't put them next to each other.


Some of the front and back sides (wild mix from the first three sets -- there are 72 front/back sides all in all): 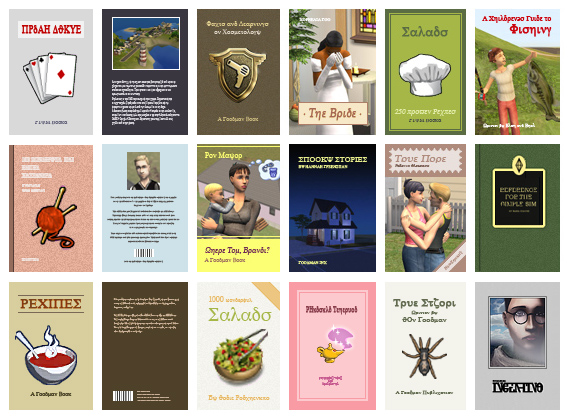 
I used some in-game icons and screenshots for this (thanks very much to SaraMK and Richief for digging up the icons ), everything else is by myself. I know that the mapping is a little bit off in some places, but there's only so much I can do .. it seems like the UV map is off in the first place (blame Maxis not me); I made it so that the texture fits where it's most prominent and is off in less visible places (for an example, see the two versions of the girl-with-blonde-guy book pictured above, it appears twice in the bookcase -- the larger version fits, on the smaller one the cover is cut off a little on the left side).

The book recolours are twice the original resolution because I think they're worth it. I don't notice a performance difference on my lame old computer. Your mileage may vary.

I've also thrown in seven recolours for the BiblioFile bookcase in simple solid colours (white, light and dark grey, light blue, light yellow, orange, and a very red red -- only the white one is pictured below but they're the exact same colours as the retro stuff I made, except for the red). The book and bookcase recolours are independent from each other (so you won't accidentially delete books when you think you're deleting a case).

The bookcase recolours are very lightweight, only 4k each.


You can use this for whatever you like; please link back to this thread when you upload it anywhere. Please respect that I don't do requests.

Back to download view
78 Comments / Replies (Who?) - 68 Feedback Posts, 6 Thanks Posts
Hide Thanks Posts for this thread (Show only feedback)
Page 1 of 4
jenwar

Ooh, these are very nice!! Thank you so much, plasticbox!

this looks way better and make my library more realisitic

Oh my gosh plasticbox, they're so cute! And crisp! And Simlish! And ....eeee!!

Yay for books pulled out being in the bookcase. Yay for Simlish and sharp images! Thank you.
Please spay or neuter your pets. --- Cat Music Video! --- my meshes
debit
Test Subject
#7

what an awesome idea, can't wait to see it in game.
thank you!
larsson1970

My Avatar? It's Corto Maltese - a pirate but a gentleman! His name stands for honor, honesty, confidence and the truth: THE TRUE FACE OF TSR
Mother Sim

i love the harry potter-esque 'lightning' book cover. everything looks fanastic...you should be proud

thanks for sharing it!
swimming and simming and my puppy...the things that make me :)
love stefii
Daisie

I've just updated the OP with a 4th retexture and also tweaked the other ones a little bit more (nothing major, just a few pixels here and there. This mesh is driving me nuts -- everything that fits on one side comes off on the other side and vice versa. And wtf is up with the err .. tops warped around the outside of the covers in the upper row?).

The new texture is probably best suited for very single-minded fortune sims, or perhaps for an office environment. Screenshot below =) you'll need to redownload the whole thing if you want only that, I've included it in the zips.
Stuff for TS2 · TS3 · TS4 | Please do not PM me with technical questions – we have Create forums for that.

In the kingdom of the blind, do as the Romans do.
ganguro

more book recolours were so much needed! thanks a lot!

Oh Yay! *Throws Confetti* This is so, so..erm, fabulous. Thank you for making an item that I always cringed at into something I will look forward to using. And Simlish...can't get enough of that in my game either.

*grabs the loot and runs away giggling*
I'm worried that my latest Salvation Army donation will result in homeless people looking like sluts from the 90s.
jay-min

you ROck! i love it. now my sims can have a bookcase like mine...cause thats what it looks like. (how'd you know?)

Wonderful, I always thought the old books were washed out and dull too.

These are a great alternative. I only wish I could use them for all my bookcases!
Mehrlicht

Its a gorgeous work.Finally beautiful books with new textures.You have spoiled us.This creation is greatly appreciated.Thanks so much for sharing it.Big hugs.
cupcakemafia
Test Subject
#18

Thank you for such a detailed set! Finally I don't have to look at those fug books anymore ^__^
ganymede30324

This is fantastic - do you happen to know of any book-recoloring tutorials?
LauraES
Lab Assistant

This is awesome!!! Thank you so much for making this!
Vampire_of_Death

This is soooo fantabulous! This is so wonderful, thank you sooooo much! This makes me want to play the game, just to see how wonderful!!

most excellent dude, thanks v much :D
Money can't buy you happiness ...... but it CAN buy you lots and lots of chocolate !!
An_na

Wow, these are awesome. Thanks bunches!
verenaheu
Alchemist
#25

Great! Looks like it was meant to look. Why doesn´t an ingenius creation like this replace all the imperfection of how it was before?
Thank you very much!