As you can see, the road is darker, the lane divider stripes are white (and sorry, but making them dashed lines is impossible because of the way the lines repeat over the asphalt texture--believe me, I tried), and the sidewalk is gray.

There are four files all together (1 asphalt, 1 street stripes, 2 sidewalk) and they can be used in any combination successfully, so if you some default colors but not all, just don't install the files you don't wish to use.

IMPORTANT NOTE: Please make sure to delete your cache files before starting your game after these files are installed. That and letting the movie run through after installing mods like this result in way fewer crashes to the desktop on the load screen. 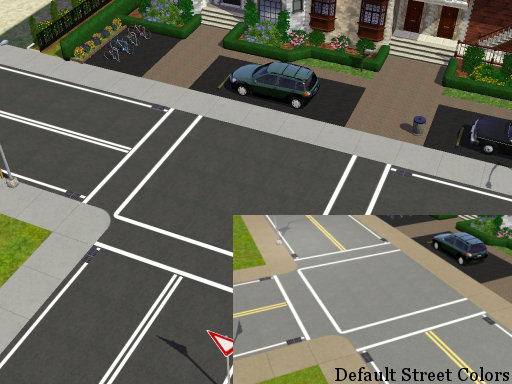 Additional Credits:
Thank you very much Peter Jones, for S3PE and to JoshieJack for requesting this and for finding the files for me to edit.

If you need more info, see:
Back to download view
44 Comments / Replies (Who?) - 37 Feedback Posts, 4 Thanks Posts
Hide Thanks Posts for this thread (Show only feedback)
Page 1 of 2
truexjrrocks1

does the interchangable mean i can have the darker blacktop and the yellow lines(default)
Martin Truex Jr. #56
Rikachu

Thank you so much!

I already downloaded these from bogsims but I want to thank you here too :]
sims blog | personal blog
rubytuesday

Hahaha, I totally agree with you!!

THANKYOU for this, I will definitely use it!!! Excellent job!!
Jabilian12345
Test Subject

Haha. It's weird of the things you don't think of when you're from America! It never even occurred to me that the streets might look odd. Is it weird having the cars drive on the right (read: opposite left) side of the road?
Sadisticpyro

This is pretty useful. I have no idea what European streets look like, being from Canada myself, but I like the colours here better.


Quote:
Actually, the game takes into account which region you're from when you install the game. So if you're from the UK, your cars will appear on the right side. If you're from the US, the left. This is the one thing EA did right, methinks.
Tumblr

Umm, we actually drive on the left here in the uk!

Question:
Would it be possible to have yellow lines at the edges of the roads in some streets, like in the main town for example?
Just a thought, as we have a lot of double yellow lines here!

I like work, it fascinates me.
I could sit & watch it all day!

Thanks! I can have darker roads. :D
The voices in my head say you're the weird one.
RandomNoir
Lab Assistant

Wow! I love it such a little change that makes a huge difference!
ingeli
Field Researcher
#12

OOh. This means its possible to have other types of roads too, I guess? On my wishlist: dirtroads and cobblestone. I guess my medieval hood will be reborn, maybe sooner than I thought

Can't wait to see this in game
MitchenX
Test Subject
#14

i never noticed how ugly the default roads were, until i saw these new ones!! a must-have!!
vr795
Lab Assistant
#15

I'm from South Africa, we drive on the left, same as as the UK, but..... my simmies drive on the right. And yep in SA the roads look more like the european version in this download so this will be great to have.
Fynbossie

Wow! I logged on this evening not realizing this had yet been approved for uploading. So, here goes the answer session:


Quote:
Yes, that's what that means. Just don't install the file named bsi_rc_defaultreplacement-streetstripes-euro.package and you will have yellow stripes.

Quote:
You're very welcome! And I wasn't allowed to say it in the initial post, but I also have some other funky default replacements at our site including money tree replacements and a baby bottle replacement that isn't all icky green.

But you probably already knew that.

Quote:
Ah, but I AM from the United States, and our roads, at least in this part of the country, look nothing like the default roads in TS3! Seriously, I'm beginning to think all of the yellow-gray in TS3 is some sort of tribute to Sims peeing all over the place in previous games, since they're much less prone to that in TS3. Back in the olden days, we even had white stripes down the middle of all our roads. Now we have the orange stripes on two-ways, with white stripes on one-ways. I have always missed those white lines, even more so because I hate that yellow color, which is school bus yellow. We have solid white stripes alongside the outside edges of the roads for "fog lines." Seriously, in bad fog those lines are the only thing that will keep you from driving right off the road.


Quote:
Actually, I think it would be possible to have yellow lines at the edges, but all streets in your town have to be of the same design since they all pull from the exact same textures, and those textures lay over each other in some pretty bizarre ways. As soon as I get my head pulled out of playing (may be a day or three), I'll look into it.


Quote:
Not to worry--they are already on my to-do list.

I will most likely upload them to BogSims when they're finished since it takes so long for files to get approved here.

And to the rest of you, you're welcome!
fido

This is great, now if only there were bicycle paths, Tram tracks, and a hint of cobblestone, it could appear down right Dutch. I can't wait to see your replacements in game, and am looking forward to any future replacement sets you might create.

Fido
LIfe is not measured by the number of breaths we take, but by the moments that take our breath away.

Thank god you made this. The game just looked mind blowingly american for me. At last we have a down-to-earth european touch!
Misty_2004

Quote:
That brings to mind another of my projects, which is several lots of row houses heavily influenced by European architecture. In the screenshot for the road replacements, you can see the bottom edge of one of the units. It's actually built to be like three separate buildings which if we ever have an apartment-type expansion pack for TS3, could easily be converted. I'm building them more for aesthetics than use, but I will probably also stuff big families I don't play into them.

Just flat out, I have a huge dislike for most western U.S. architecture, especially most of the modern looking buildings. I enjoy architecture that looks like art, as in someone spent who knows how much time designing and building structures that have stood for at least a hundred years. To my eyes, modern architecture isn't art, it's just a combination of blocks formed into a structure. Where I live we have very small old areas of town with some of the most beautiful houses I have ever seen. They vary in style, but they all have one thing in common, which is basically how varied their styles are. Each is completely unique with its own lines, window shapes, and roof structure.

Re: the cobblestone road replacements: I also have one set coming to me, which was created by someone else and they asked me to host it for them. It is a very nice set and I think a lot of people will enjoy it, but I still plan on making my own because I don't think his will quite work for everyone.

So much to do, so little time!
Sarah_Sims

This mod is great. Followed your additional instructions to the T and it worked first time like a dream. Thank you so much!
ingeli
Field Researcher
#22

That's wonderful news indeed! And I especially like that it will be possible to mix and match the different parts of it. How about the walking roads? Are they also replaced when the walking paths along the road is replaced?
Misty_2004

Ingeli, I didn't even check the footpaths to see if those draw from the same sidewalk textures or not. After it's daylight in my game I'll have to remember to look. I've actually spent very little time lately with Sims on any of those that now I forgot what they looked like to begin with. :P
InPinkClover3

I didn't see anything wrong with my neighborhood, but like to try new things so I tried your set ... I love it! I hadn't realized how the default coloring made everything look so bright (not in a good way). Thanks for this.

I don't think that's right. In Australia (as in the UK), we drive on the left side of the road, and in the game, the cars still drive on the right side. At least in my game anyway.