by lemoncandy Posted 30th Aug 2009 at 10:57 PM - Updated 29th Dec 2009 at 7:22 PM by lemoncandy : update
94 Comments / replies (Who?) - 25 Feedback Posts
This is a new mesh, and means that it's a brand new self contained object that usually does not require a specific Expansion pack (although this is possible depending on the type). It may have Recolours hosted on MTS - check below the description for more information.
Picked Upload! This is a picked upload! It showcases some of the best talent and creativity available on MTS and in the community.
EDIT 29/11/2009.
These objects became broken with the patch 1.6.6 and the expansion and caused the "blue lot syndrome". I have fixed them now so if you still want to use them with World Adventures, please re-download.

I decided to start learning how to mesh objects for the game. With no meshing experience at all, this plan was exciting and frightening at the same time. I wanted to start with just modifying simple objects a little, I thought that would be easy.
I was so wrong.
A lot of struggling with shadows, glitches, texturemapping and error messages followed. Starting over from step 0 and over again.
Several days (or rather weeks) later... I'm here with a few plants I dare to share, because I always think we need a LOT more variety in decorative objects.

My goal was to increase the number of plants that are placeable on tabletops, counters, nightstands and dressers. So, I pulled the hosta from the ceiling, re-planted the fern, and modified the orchid into a dracaena. Then created a recolor for each, thus this upload is 6 new plants.
All cost 40§ and are found in Decorative/Plants, obviously.
They don't replace game objects and all the pots are recolorable as usual. 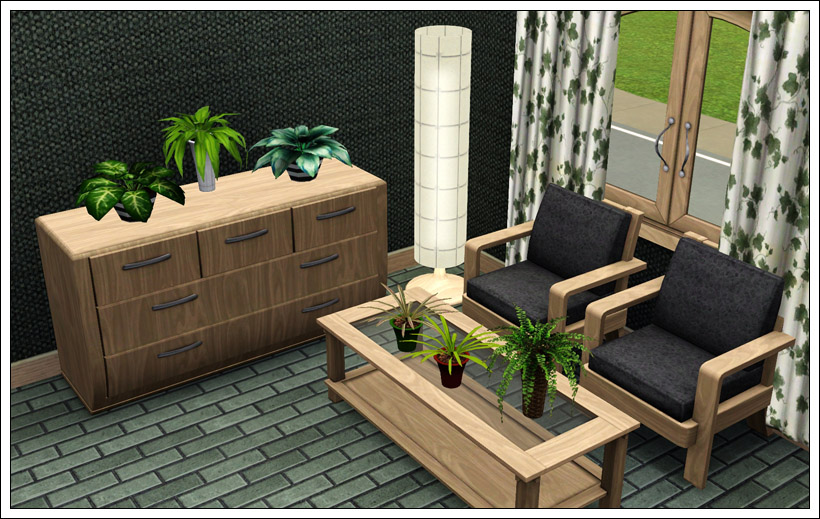 Additional Credits:
Thanks to Inge and Peter Jones for S3PE and S3OC,
Wes Howe for the object tool and the help he keeps providing in the meshing forum,
DeluxeDesigns for the tutorial,
and MTS for hosting all of the above and my stuff

If you need more info, see:
Back to download view
94 Comments / Replies (Who?) - 87 Feedback Posts, 5 Thanks Posts
Hide Thanks Posts for this thread (Show only feedback)
Page 1 of 4
SimsPhenix
Lab Assistant

thanks these are fantastic!
stariscool
Forum Resident

Thanks, these look excellent!
jay-min

LOVE IT! You can never have too many plants.
calisims

Thank you so much! It's so frustrating that most of the plants won't go on tables. These are sorely needed, and look great.
benthalo
Test Subject
#8

YAY! Thank you very much. I love plants. And I love nothing more then decorating my Sim homes with them.
Thank you for sharing.
chibarger
Test Subject
#9

WOW i have wanted more plants in my game for a long time, these are just beautiful, just one thought, more more more. thanks again youre GREAT.
MissSilhouette

You've done a wonderful job, they look awesome in the screens cant wait to test them out!
Didneyboo
Test Subject
#11

Thank you very much for sharing.You did a great job with these.(:
pinketamine

OMG! This are LOVELLY and much needed. I love decorating houses with lots of plants!
tchoa91

Wwwwooowww ! Those look gorgeous, w/ right shadows too, wo-woow !
Thank you so much help us make nicer houses.
And I love so much the "1" in the post title ...
lewisb40

Armonia (who have the most gorgeous lots @ GOS) and I were talking how we need more Lemoncandy in our game, and look you have answered our wishes! You are my hero, for satisfying my addiction to clutter. Can't wait to put them in my game. Thanks so much for learning meshing and sharing with us.
Resident member of The Receptacle Refugees
Let's help fund mammograms for everyone. If you want to help, Click To Give @ The Breast Cancer Site Your click is free. Thank you.
kittyuk

Vert nice, I just finished swearing at a sim who wouldnt eat her dinner at the table in one of Plasticboxes (<3) starter houses because there was a potted Ivy at the back edge - and was then rather disappointed because I actually liked the plant on the table and there was only that yucky 'vase with pink flower' (maybe an orchid) that would fit on it and allow her to still use the table.

Two mins later and I come here to find my mind bullets have been processed already by you! awesome :D
http://i89.photobucket.com/albums/k..._1118520167.jpg
fluttereyes

Thanks, the lack of good clutter is driving me insane.
toyou1214

Thank you, thank you! I can't wait to try them out, you're making my game better and better all the time.