by AnnDeLune Posted 23rd Jan 2010 at 10:51 PM - Updated 23rd Jan 2010 at 6:22 AM by AnnDeLune : As Per Request by Moderator
21 Comments / replies (Who?) - 12 Feedback Posts, 9 Thanks Posts
This is a new mesh recolour, and means that you will need to download the particular mesh itself in order for this to show up in your game. See the Meshes Needed section or read the text for more information.
Picked Upload! This is a picked upload! It showcases some of the best talent and creativity available on MTS and in the community. 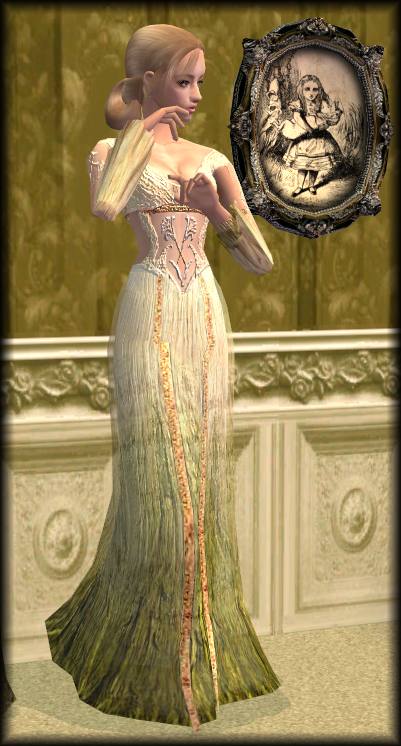 This is the gown worn be Verona, one of Dracula’s brides in the movie VanHelsing. The mesh I used by Beine is wonderful. It has three alpha-editable layers and a bump map. The mesh is from Sims2-fashion, but it appears the sight is retired, so I am including the mesh in the rar.

If you’d like a good Verona model to go with the gown, I suggest GetaGirl4’s model found at the Sims Exchange. She also has another version of this dress if you like having options.

The hair used by this model is a free item found at XM Sims. Back to download view
21 Comments / Replies (Who?) - 11 Feedback Posts, 9 Thanks Posts
Hide Thanks Posts for this thread (Show only feedback)
Antibusdeath

Amazing! I LOVE the dresses the brides wear. Are you planning on making all three? If so that would be AWESOME! Good job!
"We are begging for a reflection from a shuttered heart, to find and chase us over the edge"---H.I.M--In Venere Veritas
saber2185

That is FANTASTICALLY detailed! Thanks! I would also be interested to know if you plan on making some of the other outfits from the film. Thanks again for this one though!
AnnDeLune

I don’t think I’ll be making any more from the film just because I have a bunch of other projects that I’m working on right now. But not to worry, I recently discovered that Getagirl from here at MTS has already made the other bride’s outfits. You can get them at the exchange.

I did make Dracula (Richard Roxburgh) from the movie and you can also get him at the exchange, but he’s old and plasticy looking. So he may not be your best choice. Haha!

I will, however, be uploading a bunch of similarly themed gowns--hopefully within the week. I hope they’ll be a good substitute.

Thanks again for the encouragement!
Guardgian

Beautiful and lovely dress ! So elegant ! Thank you

It's really splendid. My compliments. a questions: the mesh you already had her or have you unloaded her? I ask you him because I would need a pair of mesh from Sims2-fashion, but i don't succeed in entering us... Do you know by chance if the site has changed his web address? thanks and still compliment. ^____^
peekaboosparkle

oh, i love it. it is beautiful. a few months ago i was searching for outfits for my brides, but had no luck. thanks for this.
AnnDeLune

VampireAlexander, Thanks for the compliment! The mesh you need for the dress is in the rar file. The webpage I got it from is closed. So everything you need is here for you. I hope that helps!
AmICute

WOW! This is absolutely beautiful :O I am soo impressed, I'm definitely downloading it! Good Job!! Thank you so much for making this wonderful gown

.
LiveJournal - For my Rainbow Legacy, Legacy, Victorial Social Class Challenge; With a Twist!, and more stuff!
DreamWidth - For downloads!
AlanDPerrine

INCREDIBLE! BEAUTIFUL! STUNNING! What more can I say? Except that this is an amazing work of Sims 2 art! Thank u!
Aligeth
Instructor

OMG! I loved! Thank you!
Hugs to everyone, always!
_Smurfette_
Test Subject
THANKS POST
#14

omg, this is beautiful! thank you so much! is there any chance you could give me the link for the hairstyle in the pictures? thanks
@emily@
Test Subject
THANKS POST
#15

cool i love it~
sk8rrchik
Test Subject
THANKS POST
#16

Thanks. Um would you make this in more colors?
aberrantanecdote
Lab Assistant
THANKS POST
#17

This is beautiful :O
asirchen
Test Subject
THANKS POST
#18

What a stunning, drop-dead sexy dress! Just the thing for a vamp. There was a lot I didn't like about that movie, but the visual effects were a pure joy. I remember I loved the vamps and especially their flying forms. And the layered effect of this dress! Wonderful. Thanks very much!
Lovesub77
Test Subject
THANKS POST
#20

This is so gorgeous. I can only imagine how gorgeous it will be on varying other Skins as well. Thank you for this beauty!
Got Milk?
Test Subject
THANKS POST
#21

where can i find the hairstyle???
xxDollBunnyxx
Test Subject
THANKS POST
#22