Servo from The Sims 2

252 Comments / replies (Who?) - 24 Feedback Posts
Picked Upload! This is a picked upload! It showcases some of the best talent and creativity available on MTS and in the community.
UPDATE: Since uploading this sim, I've seen screenshots of him in people's games where his head looks very wide rather than narrow as it should be. If that happens to you, try adjusting the head width slider in CAS to make his head narrower. I think this might be happening if someone uses a default sim and puts the head on it, rather than the customised narrow-headed sim I made for this purpose. The head should really only be used with my own Servo sim, otherwise unexpected problems can occur!

For those of you who, like myself, missed having this cute little robot housekeeper from The Sims 2, here is a conversion of him for The Sims 3 to do your household chores:

If you prefer a female robot, the body is enabled for both genders, and a female head is also included - see pic on far right below:

Servo is found in the Adult Male section of the Sim Bin, with a default name of 'Servo Male'. The 'body' (in case he shows up with a human body in your game), is in the Full Outfits in CAS, in all categories. The 'head' is in Hat Hairs. If you want a female Servo, change his gender to female and go to the Hat Hairs to find the head. (The head and body are NOT enabled for 'Random', so you shouldn't get townies wearing them!)

Please note that if you change Servo to female or he/she ages to Elder, you must change the footwear for all outfits to Barefoot - otherwise shoe textures will appear on the robot's back and arms! Changing footwear to barefoot will get rid of the texture.

Traits: Green Thumb, Handy, Natural Cook, Neat, Never Nude. (Servo MUST have the Never Nude trait in order for his/her head and body to stay on when bathing - otherwise he/she will turn into a human with blue skin and a very skinny head.)

As well as chores, Servos also enjoy chatting about science and their favourite foods, and are not averse to a little dance. 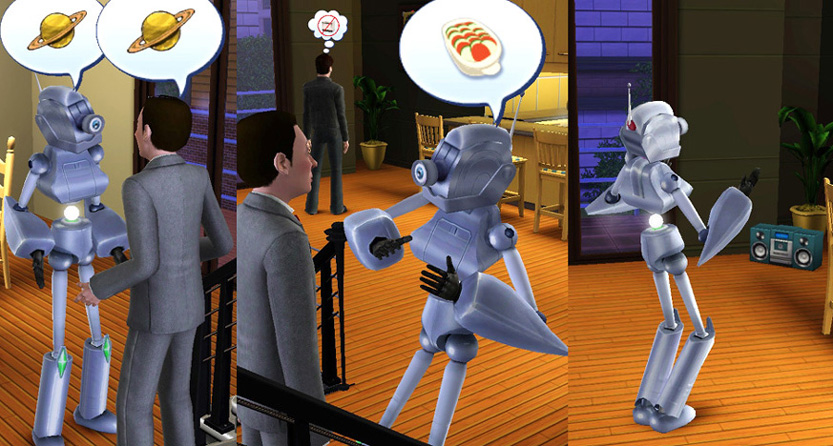 The body and head are recolourable/patternable, separately. So if you feel you really must inflict indignities on your Servo such as the pic at the far right below, you can do so. And finally, at the end of the day, they like a nice hot shower followed by WD40 and then to bed to dream little robot dreams. 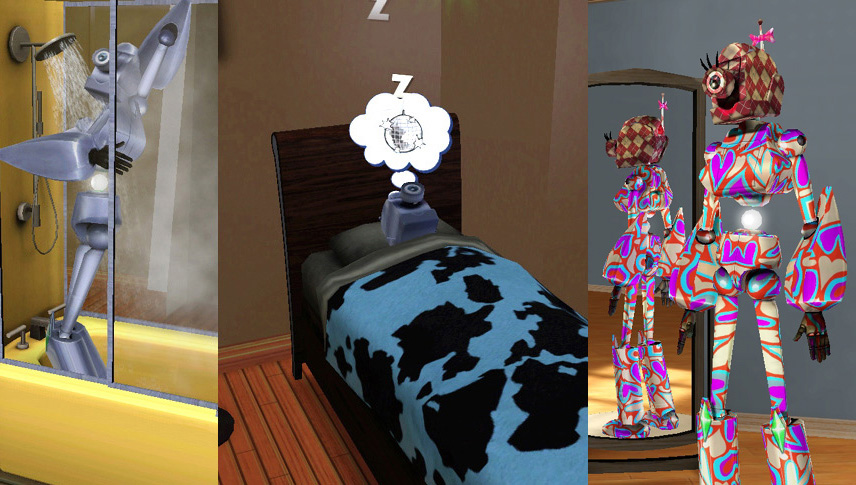 UPDATE: IF YOU HAVE AMBITIONS AND WANT TO HAVE SERVO BECOME A SIMBOT: Using a mod that lets you take sims back into CAS, such as Awesomod or Master Controller, take a simbot into CAS and 'dress' it in the Servo head and body. The head may be too wide unless you use a slider range multiplier (otherwise you might not be able to make it narrow enough), but slider range multipliers come with Awesomod and Master Controller, so you're already covered for that if you have one of those mods.

Technical Notes
This is just a regular sim wearing the body as clothing and the head as Hat Hair, but by assigning the above traits, it behaves like you'd expect a Servo to behave, going around the house making beds, cleaning bathrooms, washing dishes, etc. Although not a true TS2 servo, it's pretty convincing. The main notable difference is that they sleep rather than recharge.

UPDATE for those who have asked what happens if the female servo gets pregnant: I didn't foresee anyone wanting to get a robot pregnant, but I should not have underestimated the wild imagination of the Sims community! It's now reported that the body turns into a human pregnant female but the robot head stays on. If you want the robot body to stay, open the body .package in CAS Texture Unitool and go to the Part Category tab, click 'Valid For Maternity', click 'Commit', and then Save. (Note that the robot body won't get fatter!)

ISSUES: Due the large forearms, sometimes the forearm near the wrist will clip into dishes and so on, while carrying it, such as can be seen in the food preparation screenshots above. Also, trying to assign finger joints resulted in horrible looking in-game hand animations, so his fingers and hand are all assigned to the Hand joint and therefore his fingers don't curl.

I hope you'll find this fun in your game - I'm having fun playing with him - and please let me know if any issues, though I've tested him thoroughly without any problems.

Unzip the .zip file and you'll have one file that ends in .sim and others which end in .package. Simply copy the .sim file to your 'Saved Sims' folder which is in your Documents folder under Electronic Arts\The Sims 3\SavedSims, then copy the .package files to your Mods\Packages folder.

If you don't have a SavedSims folder, you need to just create one yourself in the \Documents\Electronic Arts\The Sims 3 folder.

Additional Credits:
MY BIGGEST AND MOST GRATEFUL AND ETERNAL THANKS GO TO BLOOMSBASE for his very kind help in advising me how it might be possible to go about converting a TS2 body mesh for TS3. His advice was absolutely right, and if it hadn't been for his help, this sim would probably never have made it this far. THANK YOU so much!

Made with the magnificent CTU: http://www.modthesims.info/download.php?t=364926
Tags: #servo, #robot

Back to download view
252 Comments / Replies (Who?) - 212 Feedback Posts, 32 Thanks Posts
Hide Thanks Posts for this thread (Show only feedback)
Page 1 of 11
Claeric

Thank you so much! This guy is gonna be doing all my sim's housework from now on. Not to mention being an excellent companion for my mad scientist.

I saw this in the forums and was waiting for it to be uploaded. I really must congratulate you on taking all that time and effort to get it to work properly.
DaveyDaVinci

Yay! I love Servo! Thank you so much.
No, u can't haz cheezburger
Ceixari
Field Researcher

This message has been deleted by Claeric. Reason: Issue was fixed! :D
whitewaterwood

You are so amazing! This is awesome, I can't wait to put it in my game!
In frustra laborat qui omnia placere studet
monca533

Amazing! I love this robot in Sims 2 and I love you for bring it to Sims 3!
My Yearbook
centerman

Say what!? Are you kidding me?! Awesome. Hands down one of the best things ever added to the Sims 3 by a creator. Thank you.
Username: Centerman
in The Sims 4 Gallery
ellywig
Lab Assistant
#11

Oh wow, this is fantastic. I'm definitely going to have fun with this.
FzzyDg8

What can I say that hasn't already been said....wonderfully creative and a much welcomed addition....thank you for sharing..

Amazing, Just unbelievable!
Its palms look kinda weird though. Maybe you can remove them altogether and add as gloves accessories? That way it will still have his "Servo" palms but will be able to use his fingers.
Still, a grand job. Thank you very much!
amakachao
Test Subject
#14

i've never played ts2 so i don't have any expectations for a servo. however i love your creativity and dedication. i think you've done an awesome job (and for free too!) i'd love to take him on vacation! and have it raise my over privileged trust fund legacy babies!
Esmeralda

Claeric, THANK YOU for the feedback - I did indeed leave 'highlight points' in, as I hadn't expected anyone to recolour him such an extreme dark colour, but I should have expected the unexpected! Please redownload - I've now uploaded a new version with a solid colour mask without the highlights - it actually looks fine without them, and dark recolouring works now. I've also redone the masks for the head.
Esmeralda

I sincerely hope not - I did not enable 'Random' in the categorisation for these items, so they *shouldn't* turn up on random sims!

I'm not clear what you mean by his palms looking weird. He's a straightforward conversion of the TS2 servo mesh, palms and all, and they look fine to me and as they should look! Please explain!
Claeric

I wanna have a whole line of servos, special editions and such. My immediate intention when I saw you were doing this was to make a family of various versions of prototype servos, each with their own major flaws. And their own colors!
SlyStarDust
Test Subject
#18

This is wonderful! Thank you. It's funny because in the Sims 2 I tried so hard to get my robot to LOOK human, and now I am making my human look like a robot for sims 3.
cbryant911

Wow, thanks I've always wonder why Maxis didn't put the Servo in TS3, anyways thanks for sharing this great creation.
Enjoji

I've been checking the site all day, went away and came back onto the site late and found this - yay!! It was approved and I'm downloading right away. Can't wait to play with this - thank you so much for this again Esmerelda

LOL Make more The sims 2 > The sims 3 xD I love your downloads!!
lauralynn

Omg! That's amazing! It looks so good! I don't know how you meshers do it but it's awsome! Thank you.
Late dawns and early sunsets just like my favorite scenes
Then holding hands and life was perfect just like up on the screen

I mean they do not bend when he uses something, look at a screenshot where he cleans a toilet. If you'll cut them off, there will be normal sim hands visible at the end of the sleeves. Then you can put gloves on them (from accessories page) and they will look right and bend normally. Hope this is more clear :P
ZippyZX3
Lab Assistant
#24

This is some truely AMAZING work. I appreciate all the time, effort and frustration you put into making this. I agree with someone above who said this has to be one of the greatest creations on the site. Excellent job, I can't thank you enough!

Does anyone know if it's possible to replace the ingame maids with these servos? I don't know much about modding so forgive me if I sound ingnorant, just wodering