156 Comments / replies (Who?) - 24 Feedback Posts, 1 Thanks Posts
This is a new mesh, and means that it's a brand new self contained object that usually does not require a specific Expansion pack (although this is possible depending on the type). It may have Recolours hosted on MTS - check below the description for more information.
Picked Upload! This is a picked upload! It showcases some of the best talent and creativity available on MTS and in the community.
This is a simple, cheap kitchen – along the lines of the TS2 "Krampft" one, only better. It consists of a counter, a counter island, and a cabinet, plus end and corner elements. 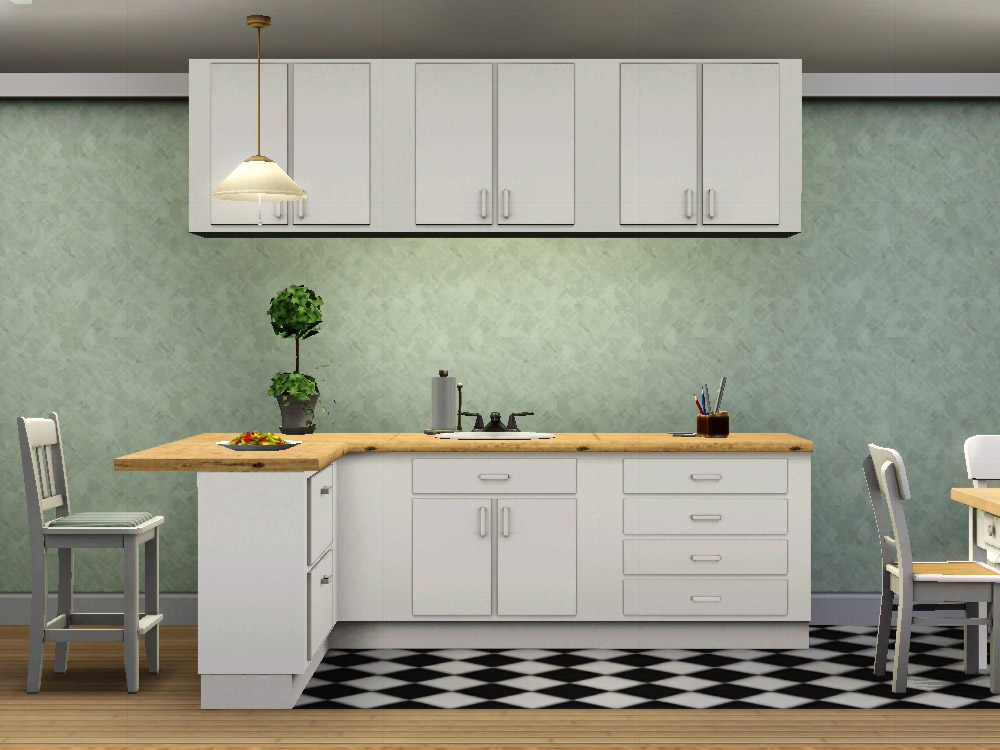 The counter is the one with doors + drawer, the island has four drawers on the base mesh and two on the ends.

One preset for all elements, shown above. In 1.8.25 games, you need to wait for the swirly preview to appear for it to work right away, since it's included as an XML, in WA games it won't show up (see below). Sorry – but after I spent a day making four presets for all nine meshes and *then* discovered the entire thing was fubar, I'm not going to do it a second time.

They're in the catalogue in Surfaces > Counters/Islands/Cabinets. The counter costs 100§, the island 120§, the cabinet 85§.

Features:
The counter and island packages are large since they each contain a full set of custom dirt overlays – this was necessary because they are mapped differently from the EA counters, so I couldn't just link to those textures. There should be no unnecessary cruft in the packages apart from that.

The sunshadows of the corner island are a bit too narrow on one axis .. not sure if I can muster the patience to fix that. It would only matter when they're actually used outdoors, like for a beach bar, and I guess there are more appropriate counter islands for that sort of thing.

For WA (or equivalent base game version) users, the objects initially show up solid black instead of with my preset – to me it looks like this has been fixed in one of the later patches. Workaround for those who want to stick with an old version of the game: make your own preset in CAST, and use that. Unfortunately I don't know of a way to provide my own presets – exporting as .sims3pack doesn't work in my game (I believe that's an OS X issue), and various ways of packaging them haven't worked out so far.

Seams between counters: please take a close look at the thumbnail picture of this post (white/blue kitchen with yellow wall) – see the seams in the EA wallpaper (and in the counter to the left of the sink)? If that's what you see, then you most probably have a lame graphics card like me, and there's no need to post about it .. it's just the way the game renders things (I believe it becomes very apparent on these counters since they're so plain otherwise – on a heavily decorated one, I wouldn't see it either). If you see something else, please post with a screenshot.

On most of the screenshots there is a dropshadow missing on the counter island ends – this is already fixed (I only didn't want to re-take all of the screens just because of that). I also moved the cabinet down a tiny amount so that it now lines up properly with small tiles and the high EA panelling (on the screenshots it does not, that's still the old mesh).


I don't take requests. Please respect that and do not post here or PM me with requests. People of the "plz make stuff for me" mindset, see this thread.

Feel free to recycle any and all parts of this if you want to do stuff like add-ons, different versions, more channels, etc – I can upload original PNGs of my textures (uncompressed) if there's any demand for it. All I require is 1. a direct link to this thread if (and only if) you include recognisable parts of my version in something you upload, and 2. you must upload to a free, accessible, noncommercial site with no strings attached (I guess this would amount to a non-commercial, share-alike CC license).

If you need more info, see:
Back to download view
156 Comments / Replies (Who?) - 135 Feedback Posts, 18 Thanks Posts
Hide Thanks Posts for this thread (Show only feedback)
Page 1 of 7
leefish

What an upload
looking fine -
and I think I may just whine -
that Plasticbox is on her mettle
- I dare not ask -
but where's the kettle?
More downloads by Leesester, BoilingOil and others at Leefish.nl | My Stuff at Leefish.nl | LeeFish RSS | Sims4 News Blog | TumblinLeefish
pinkpot
Test Subject
#3

wow i love you so much!!!
this is exactly what i have needed, a simple beautiful kitchen
genius !
thank you so much for making my game something fun
QBUILDERZ

Now my comment will never amount to the sheer awesomeness of Lee's. Even if I were to go on and say that your set looks fantastic. And that the seamless islands are amazing on so many levels that it is uncomprehend-able to my mere human mind. I mean, they way patterns show up on yours is just SO much better when compared to EAxis's. But, alas, I have been foiled by the Rhymefish, yet again!

Great work, seriously.
View the lovely lots of the "Groundwork" foundation challenge here!
Now streaming on at Twitch.tv/SeveralNerds or UglyHoesConnect.com - whichever is easier for you to type in your browser.
FzzyDg8

I love them!! Thank you for sharing your cabinets..

Corner cabinets don't work for me anyway so this is wonderful. Thank you! I will finally have more than one cabinet in my hood.
Gamineannie

These look fantastic! Great job and thank you so much for sharing your hard work. But, darn, now I'll have to remodel my latest Sims kitchen! Thank you, thank you!
DaveyDaVinci

These are wonderful! thank you!
No, u can't haz cheezburger
jacciinatl

Thanks so much for these. I seriously overused the ones that they look similar to in TS2. I can't wait abuse these too.
DigitalDollies
roxy26

Finally. Some cupboards that people actually USE.
jeromycraig

Liebere Gott, these are GORGEOUS!

Just EXACTLY the kind of furniture I prefer in the sims (and in real life) and the fact that the islands and counters can be set back to back is a WONDERFUL bonus.

Ooo these are NICE :o
They remind me of the cheap sims1 counters!
My own iff is the handles on thew doors/drawers are not seperatly recolorable; i hate it when the handles blend into counters. but i suppose i can overlook that issue.
Thank. You.
Saikatsu

People who pay attention to those little details in both the mesh AND the UV mapping are some of the best people ever. These are gorgeous! Thank you so much for sharing these with everyone.

Of course, now I am tempted to repair the UV mapping on all the EA stuff so they'd be up to par with these. Gah!
TheSimsandwich

Love how they're not as thick as EA ones.
summerqueen_sim

Ack! This is so wonderful!
Facebook! | Find more of my stuff at my blog! | Tumblr | Donate

Finally I can use the upper cabinets! I hate how the EA ones don't fade, it's just one more thing to try and see around. Thanks

Plus all the above reasons!
Y2kRobie

Thanks for making these with such care and consideration. I really appreciate your effort. These are simple and beautiful. Thank you.
lewisb40

So happy they are slim lined and the upper cabinets will fade away. Fabulous cabinets, hope someone do more!!

Thank you very much for sharing.
Resident member of The Receptacle Refugees
Let's help fund mammograms for everyone. If you want to help, Click To Give @ The Breast Cancer Site Your click is free. Thank you.
missy9487
Lab Assistant
#24

Excellent work!! Thank you for making these gorgeous cabinets, they look great in game too.
babicatz05

Let us all hug Plasticbox.