This set includes three versions of the NPC Mrs. Crumplebottom for your themed hoods. Choose from Royal, Peasant or Nun. Each comes complete with apparel, hair, purse and knitting distinct to her station. 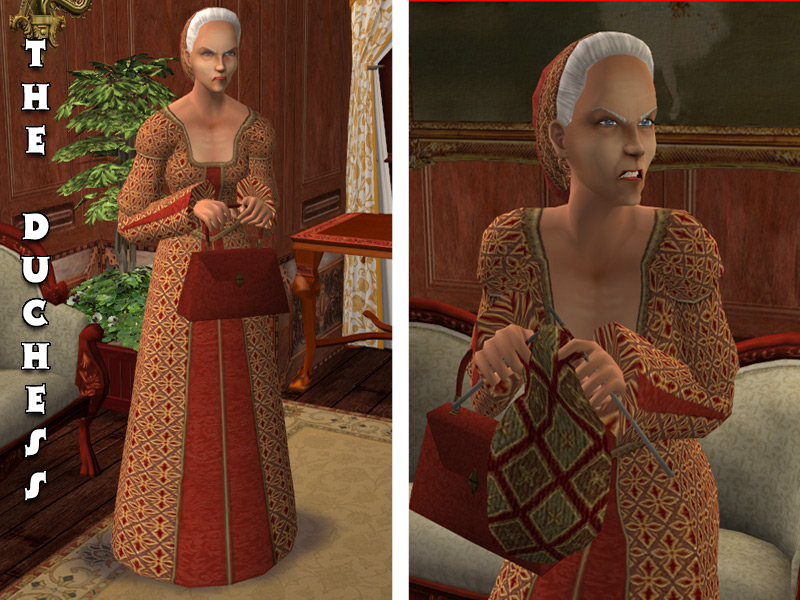 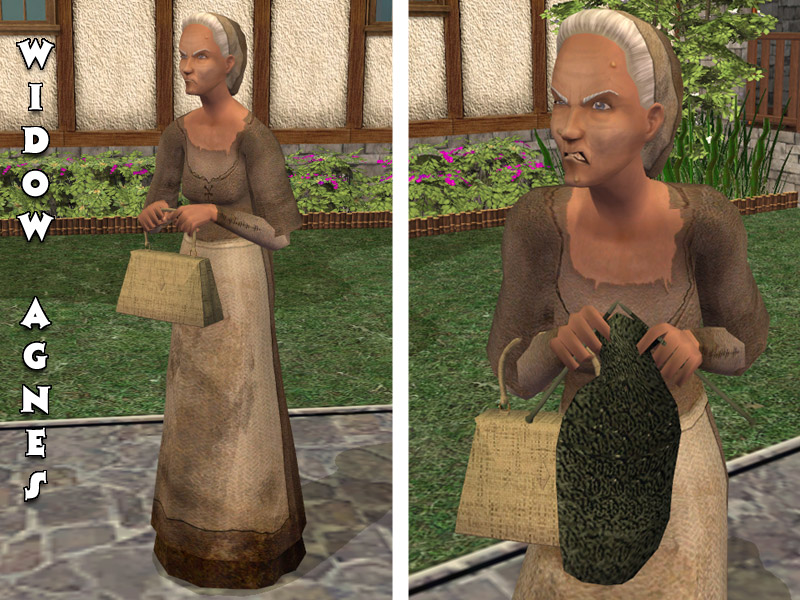 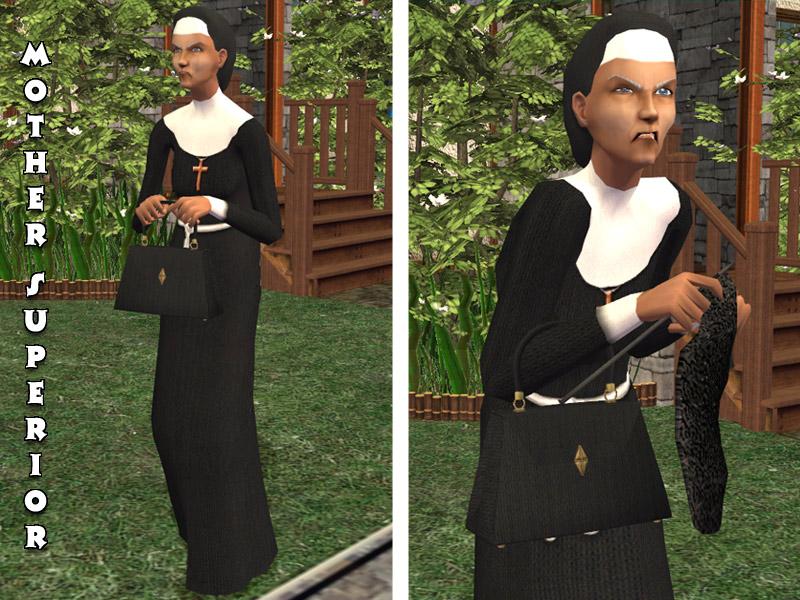 INSTRUCTIONS:
Each Crumplebottom type is a separate download containing a folder with all all the necessary files to change her apparel and appearance. This is a default replacement, meaning you can only choose one 'type' of Crumplebottom you want to have at a time. Just add one of the preferred Crumplebottom folders to your Sims2 -> Downloads folder and she will instantly change. If you want to return to the original game NPC or use another default type, just remove or delete the Crumplebottom folder.

Enblith the Fair for her Nun texture

Back to download view
101 Comments / Replies (Who?) - 73 Feedback Posts, 19 Thanks Posts
Hide Thanks Posts for this thread (Show only feedback)
Page 1 of 5
Sophie-David

Delightful! Thanks very much!

This is amazing! Thank you!!

I read somewhere online that modifying Crumplebottom's files will break the game somehow. Does this replacement carry that risk?
Almighty Hat

I wouldn't think so, because this file isn't modifying any of her character files, just her appearance. You should never try to make Mrs Crumplebottom selectable, or teleport her to your house, or date her, or move her in-- the game treats her as an object, not a normal character. If you screw up her character files, which are stored in the Program Files folder rather than My Documents, you're sunk and you'll have to reinstall (or restore from a backup). The easiest way to avoid screwing up her character files is to only interact with her as the game intended, rather than using cheats (or hacked objects like teleporters) unwisely.

However, default replacements for meshes and textures should be fine; the files being modified aren't Mrs Crumplebottom's but a hair file, two accessory files (her knitting and her purse), and a clothing file. Those files aren't attached to Mrs Crumplebottom, she just references them. It's as safe as any other default replacement. If you're nervous, back up your Program Files/EA Games folder and your My Documents/EA Games folder before installing the defaults.
sunni9676

Naomijameston - I agree with Hat, these files do not actually modify the game programming or Crumplebottoms character behavior files, merely her appearance. But you should regularly back up your The Sims 2 folder just to be safe.
Visit these sites for more Medieval downloads: Sunni Designs, Plumb Bob Keep, and The Medieval Smithy.
pegasaus

OMG, the nun is hilarious!!!
"Knowledge is knowing tomatoes are a fruit; wisdom is not putting them in a fruit salad"
101ita

Hilarious! I'm so tempted into downloading the nun one, for fun, even though I don't have a medieval nhood! Thanks for sharing.
abitha

Wow this is so much fun!
xx Jasper

This is great. Love the nun, thanks for sharing

Love does not consist of two people looking at each other, but of looking together in the right direction. - Antoine de Exupery
NixNivis

Brilliant! I love it - the knitting especially!

Brilliant, brilliant, brilliant. I swear you and Almighty Hat are in league with one another to turn players medieval. Every time I see one of either of your offerings I come that much closer to throwing up my hands and giving in, and I think that Sr. Crumplebottom may have just tipped me over. Thanks so much!
daislia

What a wonderful idea!!! I especially love the 3rd one, Good Job!
My Profile at TSR--My Sims2 blog
An eternal cycle, falling and rising, rebirth and death. The hopeful and the greedy give rise to the city we observe.
We share its misfortune. We balance when the scales tip. But we do not grieve for the fallen.
- Keeper Annals, History of the City
whitewaterwood

This is hilarious! Thank you so much! :3
Nintendork Island | Please call me WWW!| Despite what avatar says, loves all of mts <3

I Love all 3! And you want me to choose?! Well, I think the one I find the funniest has to be the nun, so she'll be the evil purse wielding nun!

May I request that your recolors be uploaded as just that, recolors? They are fantastic, and my elderly sims never have enough different clothes!
Melysa1973

The warts on the peasant face are priceless! Thank you!

The nun version is my fave; ahahaha! This is awesome! Even though I have no plans for a medieval neighborhood... I find myself tempted.
gen8dog

The nun outfit suits her so well... Thanks

Well, I think the nun outfit suits her best, she's always hitting my SelfSim with her purse, and a nun most likely frowns on gays. So that'll work! I love it!
ScienceNerd
Test Subject
#21

Is it wrong that I want CrumpleNun even though I DON'T play a medieval neighborhood?
sunni9676

ScienceNerd - The nun apparel isnt strictly medieval, its quite timeless. Nuns have been wearing the same basic apparel for centuries. So, I think she will fit in modern neighborhoods quite well actually.
Visit these sites for more Medieval downloads: Sunni Designs, Plumb Bob Keep, and The Medieval Smithy.
starwind

The nun is perfect for any neighborhood, from medieval to modern. And it fits with her programmed attitude as much as being an old widow. Bravo!
Esmeralda

Oh this is hilarious, especially the nun - thank you!
ohmycake42
Test Subject
#25

Widow Agnes is amazing. The warts, the warts! I cower in terror!