The one thing I didn't like was that everything is so....classy. Even the low-end bars and clubs are still a little too "nice". All I want is a small, rundown, probably-not-up-to-code night club! I wasn't able to find one, so I built my own.

Shady's is modeled after a RL local club. The club is literally in the middle of nowhere, and looks a mess from the outside. But once you cross the threshold, it's the party of a lifetime!

I mirrored that idea with this lot. The outside is dingy; lots of graffiti, old posters, etc. The main building is an old house that was gutted and revamped into a dance floor. On the side there's an obvious, last minute new addition to the original floor plan. Is it properly insulated? Probably not. Is it functional? For the most part, yes. Just don't let the wind blow too hard! 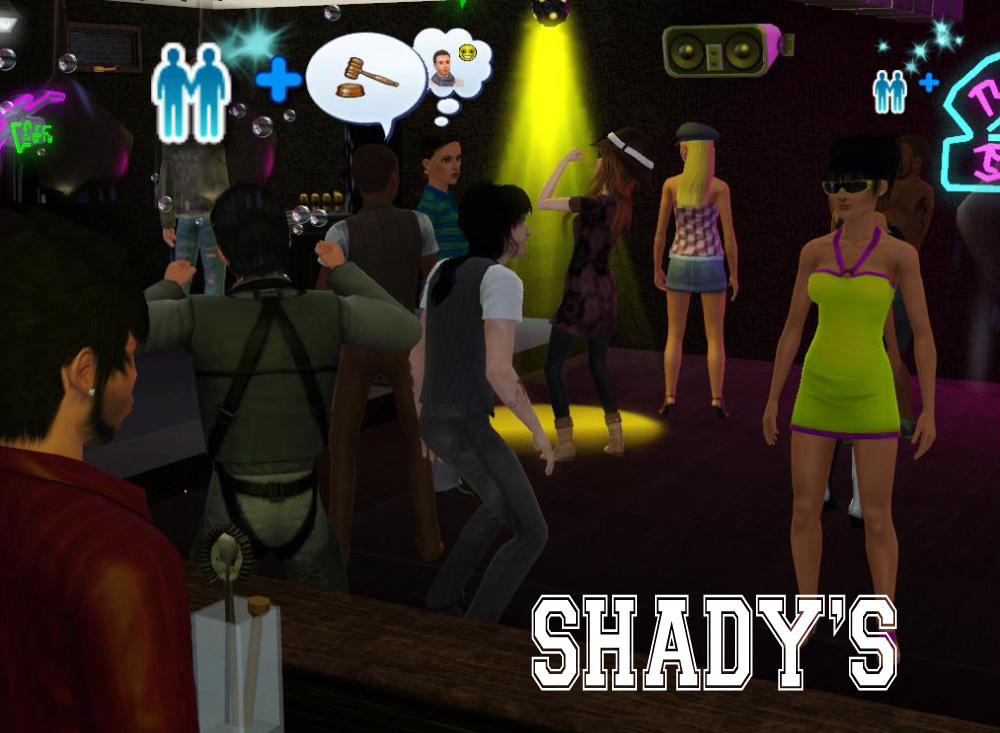 The club has a small, cozy open floor plan. There's a big dance floor right off the entrance. On the stage, there's a DJ Booth* and a smaller dance floor for those daring enough to be on stage. To the left of the entrance is a wrap around bar with seating for 5. The bartender has two entrances into the bar. They can go through the hallway, or through the back door. I did this to create a backup route just in case one entrance is blocked for some reason. Unfortunately, when I play tested, sims tend to like to enter the back door and go through the bar. It's not the end of the world, just something to take note of. 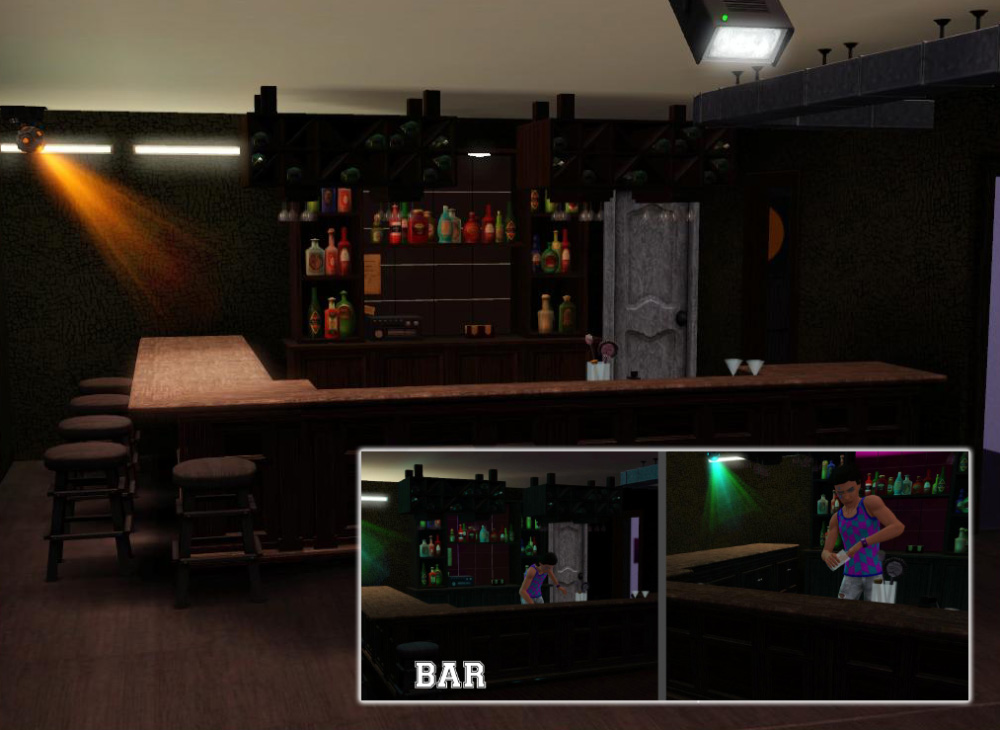 Now then, what's a hole-in-the-wall club without its disgusting bathrooms? The bathrooms are my favorite part, and I spent the most time on them. Bathroom walls and stalls are the greatest place for human expression. Where else could you learn "Jeannie loves Harry" and "John's mother is a llama"? Or my favorite, "call 555-1234 for a great time!" I used just about all of the wall writings at Club Crimsyn to properly spread the good news that can only come about with a black Sharpie marker. 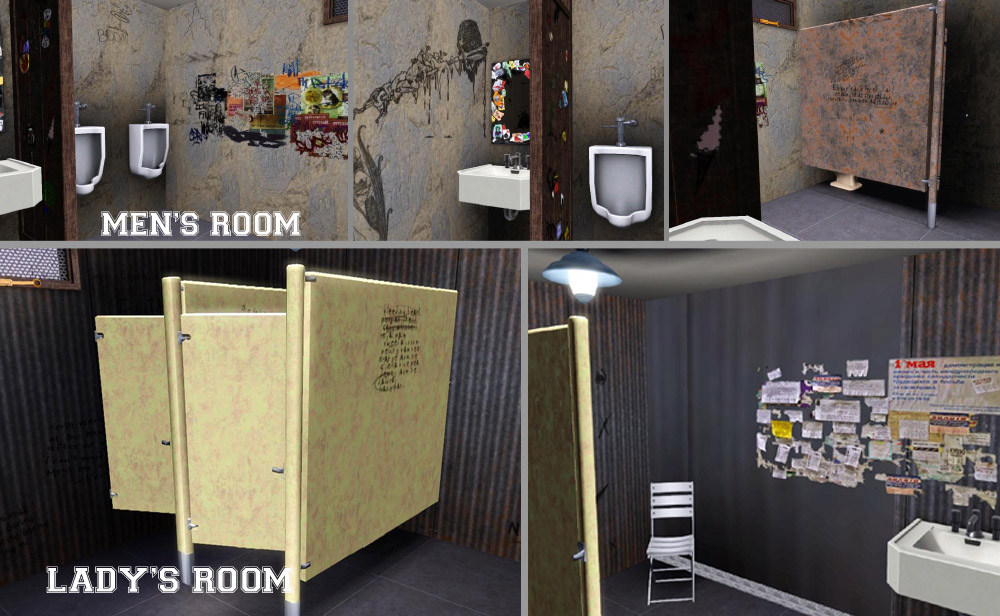 Shady's is classified as a dance club, so your sims will behave on it accordingly. You will obviously need Late Night for this lot to function.

*The DJ Booth is a store item, but it makes no difference if you do not have it. The game will just spawn something similar in it's place.

Wanna add more ambiance to the club?
I've found that playing your own Custom Music in a dance club makes the place ten times more fun to play with! If you don't have the DJ booth, I still recommend having a stereo on the lot. That way you can be in control of the music.

Built with Game Version: 6.0.81
Key: - File was updated after upload was posted
Need help with downloading or installing content? Click this link!
Don't forget to Thank the creator after downloading! Use the Thanks button located above the screenshots above.
Quick Guide:

If you need more info, see Game Help:Installing TS3 Packswiki for a full, detailed step-by-step guide!
Back to download view
20 Comments / Replies (Who?) - 4 Feedback Posts, 15 Thanks Posts
Hide Thanks Posts for this thread (Show only feedback)
fxchrfxchr
Instructor
THANKS POST
#2

"Unfortunately, when I play tested, sims tend to like to enter the back door and go through the bar. It's not the end of the world, just something to take note of."
Maybe they don't want their spouses or whoever to see them going in.
Anyway, thanks for a more realistic lot!
candlelight82
Scholar
THANKS POST

This is brilliant! I love that you spent so much time on the bathrooms. I would have done the same thing! :-D
Ravynlee
Field Researcher
THANKS POST

This is brilliant! I agree, there wasn't enough diversity in the clubs, at least broad-spectrum. There's poor then there's POOR. This is awesome! Thanks a bunch!
divalbw2

Now this is what I'm talkin bout. You did a good job. Thanks for sharing

I thought LN's night clubs were too fancy, as well. I want to make my own. What exactly makes this function as a night club? I mean - can I put this in Sunset Valley or does it have to go in Bridgeport? Is there a specific object that it needs to make it a bar?
daluved1

That just means that it's lot type is set to dance club, so sims will treat it as one. You can place it wherever you want

"Holy Shift! Check out the asymptotes on that mother function!"
divalbw2

Ok - gotcha...... ( After I posted the question, I sat here and thought about it - I figured that was all one had to do.....duh)
Vera_J
Lab Assistant
THANKS POST

This is great for my Twinbrook neighborhood. Thanks!
Simrecruit
Test Subject
THANKS POST
#10

Now this is my kinda bar, everday down to earth kinda sims, not stuck up thier own rears and to posh to talk to you, yehh busta move! Thankyou

Just a quick questions about the custom content you listed:

Is there another way to get to this roof? Not everyone is a MTS2 Staff member, which is the message I get when I click on the link.
daluved1

Oh sorry, I forgot to switch databases before I posted the link! Should be fixed now

"Holy Shift! Check out the asymptotes on that mother function!"
prada_chiq
Test Subject
THANKS POST
#13

Thank you ever so much! I have literally been itching to to download an urban world but I cannot find any! so I've come to the conclusion I'll just have to modify bridgeport or another world i downloaded.. thanks for this though it'll be perfect for my urban neighborhood

Just wanted to say how much I like this bar! I put it in Twinbrook in the swamp - also in Barnacle Bay. Thanks again.
Kilhian
Test Subject
THANKS POST
#15

Indeed my sims like to take the back door, but it's not a problem, I really enjoy the place, it made my town a lot more lively without having to add a building

can't believe on my various lot searches i missed this, bought the store content and donloaded the cc just for this lot

oh & the link for the column didn't work for me

Simpossible's site has been down for almost a year.
"Holy Shift! Check out the asymptotes on that mother function!"
Chocklitkiss
Lab Assistant
THANKS POST
#19

Where I come from, these kinds of bars are called "hole in the walls", and are packed on the weekends and usually busy weekdays after work, too. I have it in my slum section of MySimRealty's Brooklyn Heights, and even the celebs show up to get their boogie on!!

Small but everything in it! Thank you very much!
KarinaRunda
Test Subject
THANKS POST
#21

The house is very nice, but a lot of сссссссссс