by iCad Posted 15th Nov 2011 at 10:07 PM
19 Comments / replies (Who?) - 6 Feedback Posts, 13 Thanks Posts
This is a Maxis Recolour which means that it is a recolour of an item that already exists in your game. Please check the Expansion pack requirements to see which game pack it recolours.

Yup, it's another door, as usual in my 20 wood colors.

This is the Touch of Teak Pigalle French door, which is kind of a nice door, I think. Here are the colors, all the usual suspects: 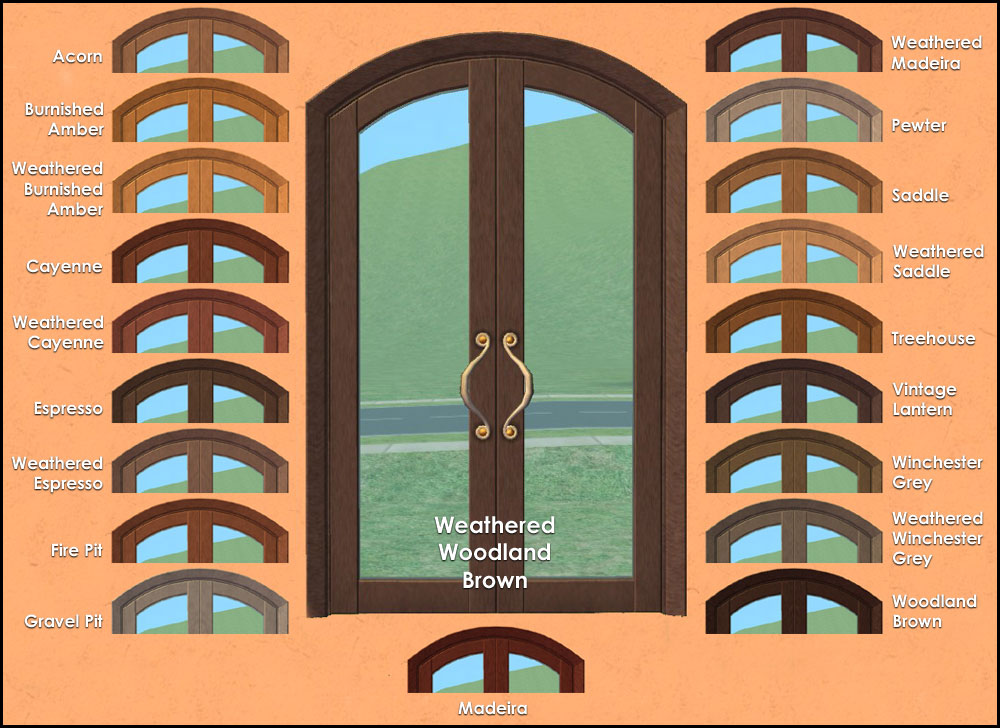 The pics used to make the above collage were taken outside on the sunny side of a lot. For comparison's sake, here's the Weathered Espresso color taken from inside: 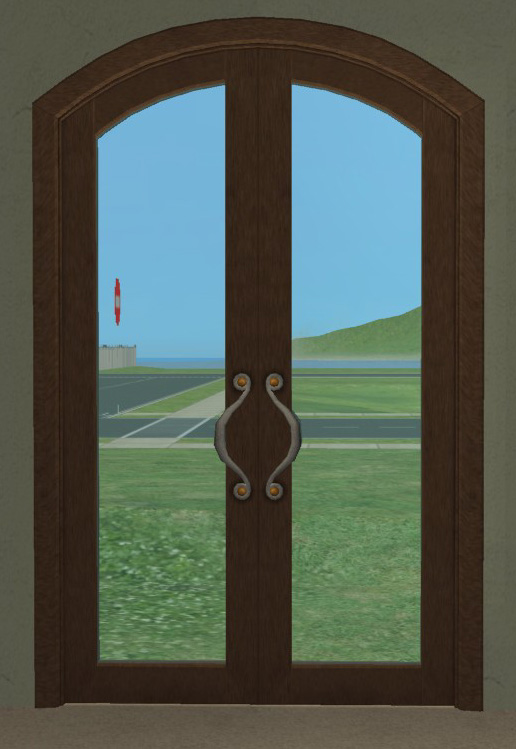 Please note that I have only recolored the wood part of the door, not the handle hardware. The handle is indeed recolorable, but I think Maxis already covered the necessary basics.

These files will also recolor the matching arch. As always, the files are pre-Compressorized and clearly named so that you can easily delete the colors you don't want/need. Happy simming!
Tags: #maxis recolor

Back to download view
19 Comments / Replies (Who?) - 5 Feedback Posts, 13 Thanks Posts
Hide Thanks Posts for this thread (Show only feedback)
Zirconia Wolf
Field Researcher
THANKS POST

Thank you - these colours look great

- on this and on my one tile version. I agree on the handles - no need to spend centuries recolouring those.
BurgundyStars

Another one of my favorite doors get more recolors! Thanks again! :D
xSayuri
Lab Assistant
THANKS POST
#5

Yay for recolours!
Thanks you. I love all your recolours :D
Simonut
Meet Me In My Next Life
THANKS POST

Way to go ! Perfect just what we need, thanks so much for your continue creating Sims 2 objects.

Thank you so much for recoloring this!

I was trying to use this door in-game a few weeks ago, and was sad when I realized your recolors weren't available for it.
gazania
Mad Poster
THANKS POST

This is one of my favorite doors as well. The only question is ... which colors do I download ... or should I just download 'em all?

As always, thank you, everyone, for the comments. I feel lurved and inspired to put together more of these for sharing.

I have almost all of the windows/doors in the game recolored now. Don't know if I want to bother with the "Ergo" stuff, but I might just for completism's sakes.

So, it's just a matter of RARing and picture-taking and uploading and all that jazz. ANYWAY!

You wouldn't, by chance, have a three-tile version, since I tend to find those useful for double doors? Ah well, I'll just look for myself.

@Simonut: I'll create for TS2 until I run out of things to create, which won't happen until every damn thing matches.

Now that I've got windows and doors done, I'm working on furniture, not in these 20 colors (although I could do that, too), but in the four Maxis "mission" colors plus white 'cuz that's what I tend to use most often. Everything in 20 colors would probably a bit of overkill.

But anyway, I'm glad there's still interest in TS2 stuff because even though my new-to-me desktop could probably run TS3, I have no interest in the game.
jenmart213
Test Subject
THANKS POST
#11

Yes! Thank you so very, very much!
MarylenaSTAR
Lab Assistant
THANKS POST
#12

great! Love this! I was getting annoyed that the door colours wouldnt match some windows!
leefish

leesester adds link to one tile door >> http://www.modthesims.info/download.php?t=389135 and wonders if there will ever be these wood recolours for the AL Socialites?
More downloads by Leesester, BoilingOil and others at Leefish.nl | My Stuff at Leefish.nl | LeeFish RSS | Sims4 News Blog | TumblinLeefish
iCad

*smooches* How on God's green Earth did I miss it?

And yes, AL doors have been recolored. I wanted to upload all the base game ones first. Then I'll move on to the EPs/SPs. (Well, except for the one GL door, which I got a request for.) But because I love you, I'll upload the AL doors next, along with the Open Me stuff.

I'm mostly found on (and mostly upload to) Tumblr these days because, alas, there are only 24 hours in a day.
Muh Simblr! | An index of my downloads on Tumblr.
leefish

but I see em as like, er, friendly suggestions. Yus.

Anyhooo - I am on the verge of uploading a complete set of windows and doors and they are slaved to the AL Socialite WINDOWS. Amythestfenix already did a lot of those recolours, and they are very nice Maxis Match colours (I have them in my game and use them a lot) - but are not iCad colours.

Yay - glad to see more of your stuff, iCad! Thank you :D
And that's good news about your new computer!
iCad

Worry not! I actually kind of like it when people prod me. Otherwise, deciding what to upload next can be somewhat...overwhelming. I don't know why, but it is.

The windows? I thought they were stone, so I didn't touch 'em. And I don't think I've ever actually used them for anything since they're generally not my "style." But I'll have to take a second look at them... Oh wait! Maybe the insides are wood? Oooooh...

Will slap colors on them ASAP, if that's the case...

Anyway, I did touch the door, however. Really, REALLY touched it.

I'm just hoping to God that what I did looks good on your one-tile versions...
I'm mostly found on (and mostly upload to) Tumblr these days because, alas, there are only 24 hours in a day.
Muh Simblr! | An index of my downloads on Tumblr.
AlexandraSpears
Mad Poster
THANKS POST

I am really enjoying all your recolors! Thanks a LOT!

Thanks! Love these recolors!