by Audrey Posted 19th Dec 2011 at 10:02 PM - Updated 29th Dec 2011 at 1:21 PM by Audrey
23 Comments / replies (Who?) - 5 Feedback Posts, 15 Thanks Posts
Picked Upload! This is a picked upload! It showcases some of the best talent and creativity available on MTS and in the community.
In 2000, Perabo was cast in The Adventures of Rocky and Bullwinkle, as FBI agent Karen Sympathy. Her next film role was in Coyote Ugly as Violet 'Jersey' Sanford, for which she won an MTV Movie Award for Best Music Moment for "One Way or Another".

In 2001, Perabo starred in an independent Canadian movie called Lost and Delirious, playing a boarding school student who falls in love with a female classmate. The next year, she starred as a French exchange student in Slap Her... She's French, which was shelved in North America for two years, then released under the new title She Gets What She Wants. The film was released under its original title in Europe. In 2003, she had a role as the eldest Baker child, Nora, in Cheaper by the Dozen (2003), a role she reprised in the film's 2005 sequel.

In 2009, Perabo made her Broadway debut in the Neil LaBute play Reasons to Be Pretty.[6] In June 2009, Perabo was cast as the lead character, CIA agent Annie Walker, in the television spy series Covert Affairs on the USA Network.

On August 20, 2010, Perabo was injured filming an episode of Covert Affairs.[citation needed] After the finale of the first season it was announced that the second season would begin in summer of 2011. For her work on Covert Affairs, she received a nomination for the 2010 Golden Globe Award for Best Actress - Television Series Drama. 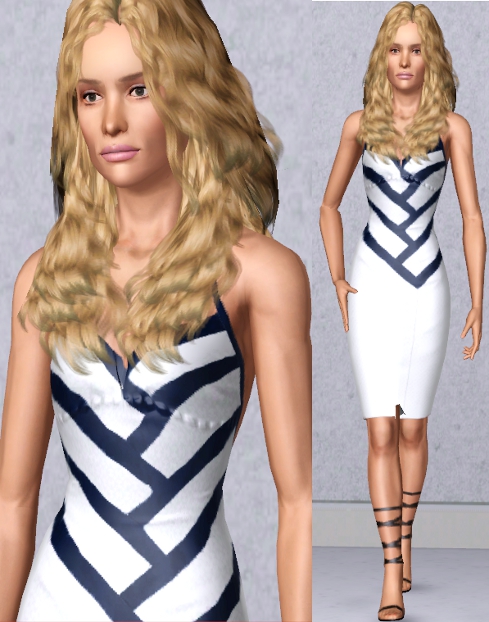 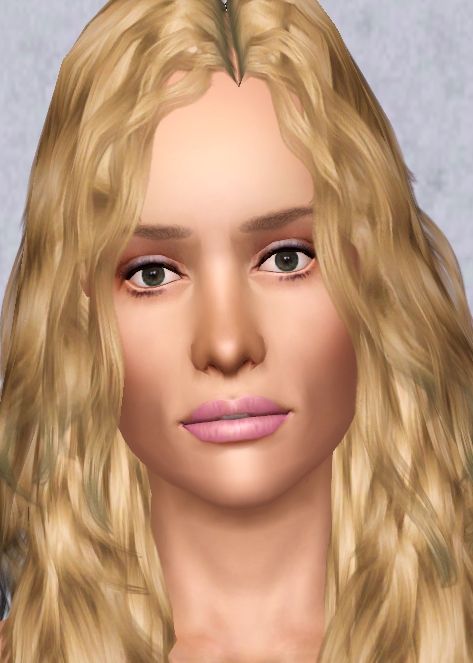 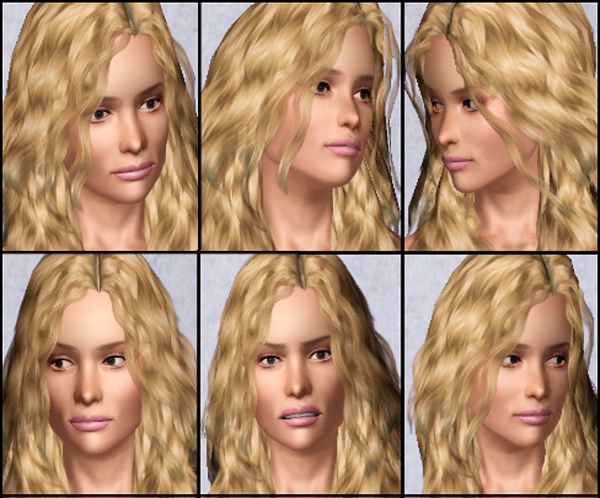 GENETICS
Default faces by Ephemera:HERE
Lively Eyes by Shady:HERE
Eyebrows by Jessica2020:HERE
Nouk's hair converted by Anubis360:HERE but she is packaged with EA hair. Regarding my choice of hair, there was a perfect hair for her but it was pay so I couldn't use it. When you download her, you can put whatever hair you want. If you look at the profile pic, she did at one stage have quite wavy hair which is why I chose it, and it was free.

Lower eyelashes by Aarin - the link is no longer available, so I have put them as a download with the sim.

MAKE UP
Blush: EA base game
Lipstick with teeth by Arisuka: HERE

SLIDERS
Custom sliders are vital to download if you want to tweak this sim or to make your own celebrity sims.

Ahmed’s facial sliders: HERE
Head shape slider by Johna:HERE
Heiret's under chin slider:HERE This is now an attachment as the link is in Korean and very hard to find the download.
Crossed Eyes Slider by BloomsBase: HERE This slider allows you to move the position of the eyeball. It works with default and contact lenses.
All aWT's sliders: HERE


Additional Credits:
My thanks go to Heaven, WillMurray, Monca and SimmyRN. This is a request from HinitaObsession. I hope you like it.
Tags: #Piper Perabo, #celebrity, #pretty

Back to download view
23 Comments / Replies (Who?) - 4 Feedback Posts, 15 Thanks Posts
Hide Thanks Posts for this thread (Show only feedback)
hard2please1976
Test Subject
THANKS POST
#2

Yay! Audrey, you outdid yourself! She is absolutely gorgeous! Congrats!
CinderEmma
Scholar
THANKS POST
#4

I've never heard of her before, but I like her face

I'm definitely putting a super straight hairstyle on her though, I love the picture with the real Piper with her teeth showing (probably use the CC that shows teeth too :P)
nell1978
Test Subject
THANKS POST
#5

your version of Piper is so beautiful, i love it
Esmeralda
Mad Poster
THANKS POST

I dunno who she is but she's a great likeness to the photos, nice work as always!
lewisb40
Mad Poster
THANKS POST

I love Piper, she is one of my favorite actresses and I think she is gorgeous. Good job simming her, the sim is pretty too.
atchieonse1508
Lab Assistant
#8

Everytime I click the direct link to Aarin's eyelashes I go here:

Where is it there???

What does "a schleb" mean?
Audrey
Forum Resident
THANKS POST

Hi all above, thanks for the appreciation and the feedback.

Thanks to the mods for clearing her so quickly and without changes and for your nice comment.

CinderEmma, if you look hard at the pic of the sim, she has lipstick with teeth.

atchieonse, I have uploaded the two aarin eyelash files.

I love your work, but I'm wondering will it work with PETS? Meaning, the hair, and the sliders - I heard that CC and Pets do not get along - I'm hoping she'll be able to work in Pets. Thanks.
zarmor
Lab Assistant
#12

Very good job, she looks just like the real Piper, although I agree the hair are a bit too curly.

BTW the link to the default face seems to be broken, at least for me.

Thank You
This message has been deleted by HinataObsession.
zarmor
Lab Assistant
THANKS POST
#13

BTW I found a hair that looks really like the picture of the real Piper you posted.

I don't know if it's appropriate to tell about it here ( it's a pay hair ) , so if you are interested and you think it can be useful, you can ask me
Audrey

Yes, she was built in PETS so will work.

The under chin slider is now an attachment.

Regarding my choice of hair, there was a perfect hair for her but it was pay so I couldn't use it. When you download her, you can put whatever hair you want. If you look at the profile pic, she did at one stage have quite wavy hair which is why I chose it, and it was free.

Thanks Hinita for requesting her, building her earned me a star, so that is great.
I feel honoured, a Spanish magazine wants to feature my Desperate Housewives and Will Smith in their feature on celebrity sims.
Little Uchiha
Test Subject
THANKS POST

Hi, I don't know her, but she is a lovely. What would be the right personality traits for her? Thank you very much for sharing!
HinataObsession
Test Subject
THANKS POST
#16

It also earned you a spot on my Favorite Creators list. :-p

I tried to make a sim of her before and it didnt turn out good but yours is amazing!
JAKINCOL
Forum Resident
THANKS POST

Thanks, I appreciate the feedback.
HinataObsession
Test Subject
DELETED POST
9th Feb 2015 at 2:20 AM

Thank You
It has been years since you created this Sim. I still love her as much now as I did when you originally created her. Unfortunately I have stopped watching her shows and movies, but I am still a fan of Piper Perabo in general. She is also still gorgeous! So thank you once again for creating her for me.
HinataObsession

Update & Inquiry
Update:
The RayFile download has been working fine.

Inquiry:
I have been installing all the faces that come with the download. Which one of the faces did you use exactly? I just do not want to have additional CC I am not using.