by Klemens Posted 26th Mar 2012 at 6:54 AM - Updated 26th Mar 2012 at 8:08 PM by Klemens : Minor changes in text
14 Comments / replies (Who?) - 3 Feedback Posts, 11 Thanks Posts
Are you that busy, ambitious person determined to fulfill your dreams and be successful? Are you interested in latest trends, but have no time to really get into them? Don't you have that need from time to time to just slow down and relax for a minute? If so, then you definitely should visit "Casa de Carmen" Salon & More! But be warned - once you enter, you'll probably meet the most cheerful people in the world! 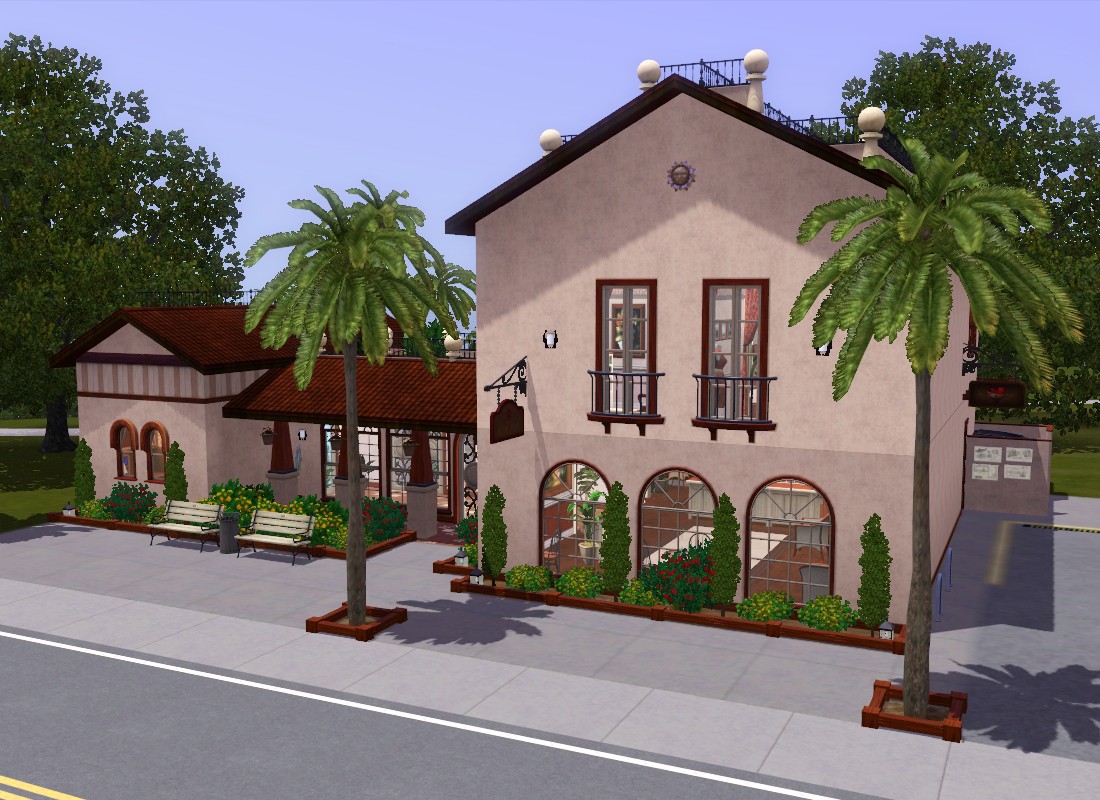 "Casa de Carmen" connects past with the present time. Established about 150 years ago by Señora Carmen Cantante as a regional nectar center, it immediatelly became a local hub of social life. However, it fell into decline over time as local farms gave their way to growing city. Luckily, what used to be a neglected nectary, today is a bustling place that changes the meaning of "good taste". 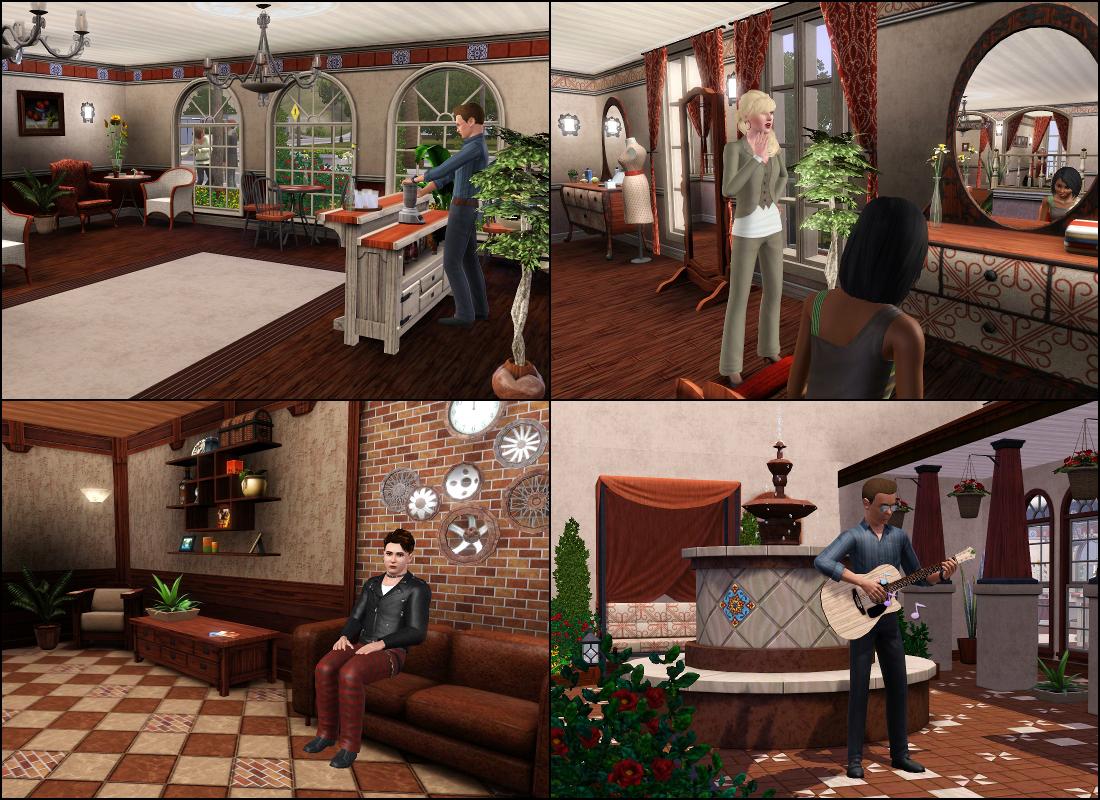 Want to be the main atraction of the show? Our specialists will advise you how to wear, look and live as stylish as possible. Or maybe you want to find a retreat for a day? No problem! Drink our coffee or other beverage, admire the detailed work of old architects, sit between flowers at patio, play a round of domino or take a short nap and just relax... 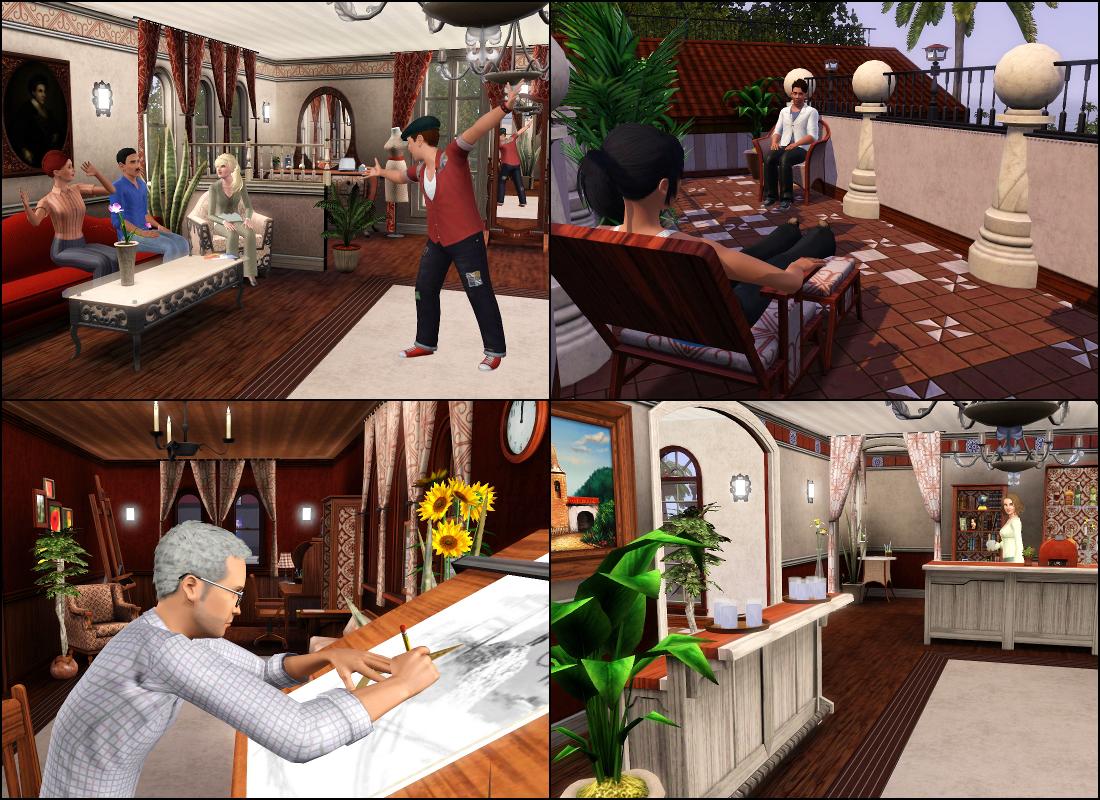 Does all of this sound right? Then see you soon! ¡Hasta pronto!

Yes, I know, it's yet another salon made by me. What can I say? I just really like to build places where Sims can both work and hang out. Plus I hate it when things don't match. And although my previous creation (available here) fits quite well into the main theme of stardom, Showtime added some Spanish/South Californian style stuff that I couldn't resist. And so this salon in former winery-... umm, I mean nectary-like building was created. However, if placed in Starlight Shores you'll probably see that the suggested lot for salon is in quite run-down surroundings. I built this building at 47 Los Sueños Strip (see screenshots section), but it's up to you where you'll place it.

As you can see, I uploaded two different files here. It's because I wanted this lot to be availabe to as many players as possible. And so, what you can see on the most screenshots is the "Standard" version, which requires only Ambitions and Showtime to work (and base game, of course). It has all functions, provided by those expansion packs, but the whole story about nectary is only for looks.
However, if you also have World Adventures and want this lot to actually serve nectars too, then "Plus_WA" version is for you. The picture below shows the only differences between those versions: 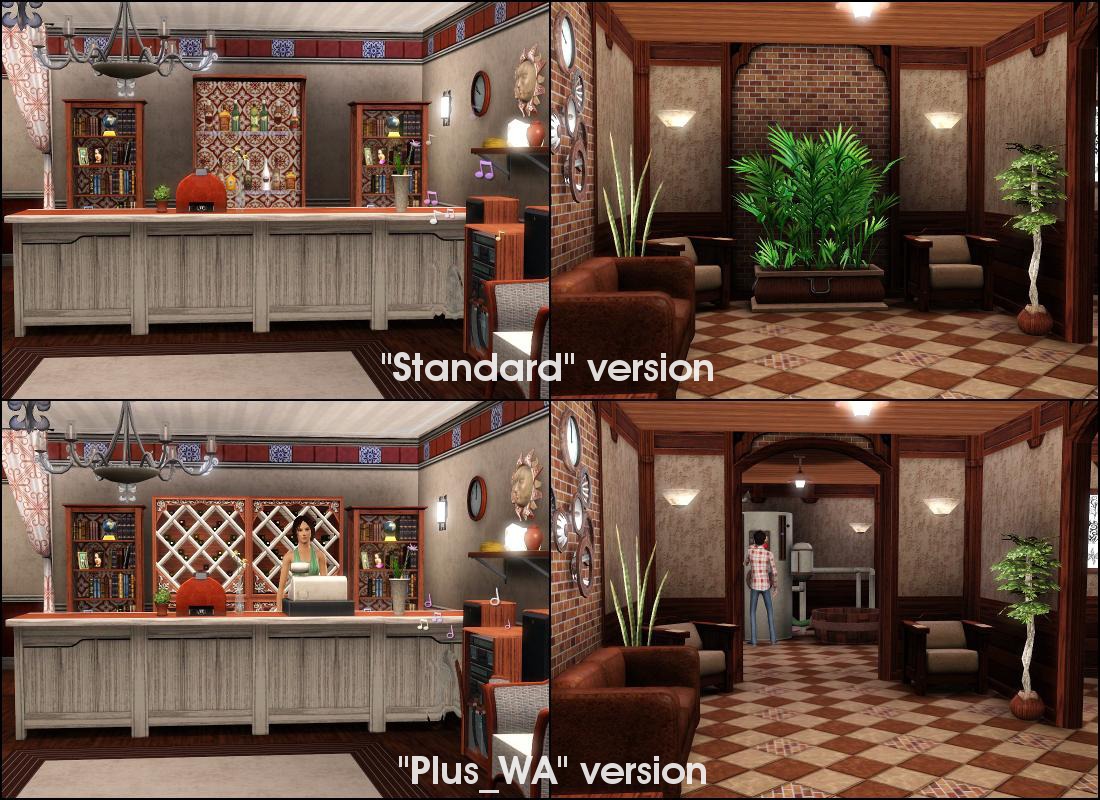 The "Plus_WA" version (Base Game + World Adventures + Ambitions + Showtime) has all the stuff listed above and:
The whole lot was playtested and no Custom Content or mods were used to build it (although I used "moveobjects" code, so be careful while moving stuff around in buy/build mode

Built with Game Version: 12.0.273
Key: - File was updated after upload was posted
Need help with downloading or installing content? Click this link!
Don't forget to Thank the creator after downloading! Use the Thanks button located above the screenshots above.
Quick Guide:

If you need more info, see Game Help:Installing TS3 Packswiki for a full, detailed step-by-step guide!
Back to download view
14 Comments / Replies (Who?) - 2 Feedback Posts, 11 Thanks Posts
Hide Thanks Posts for this thread (Show only feedback)
E-Double
Lab Assistant
THANKS POST

I can't wait to put this in SS! But I have question, have you run this through custard and saved it? I can't extract the package with the Multi-Extractor, nor can I run the sims3pack through custard.
Klemens

Quote:
Hmm, well, yes, I did run it through custard to get rid of unnecessary images and other stuff... I'll check that in a moment to see what's going on and let you all know ASAP.

EDIT: Ok, I know what's going on - it seems that custard reacts "allergically" to any specific characters in files' title or description (in this case for "&" and probably also quotes). The files themself aren't corrupted and still work fine with game. I'll upload a "characters-free" versions, but later today as right now I have some importand stuff to do. So keep calm!

Thank you very much for looking into it

I greatly appreciate it. I didn't actually think anything would be corrupted in the uploaded, I just prefer to install my lots straight to the Library and skip the Launcher. I really dislike the launcher.

I shall wait patiently for your update

Ok, I've just updated the files. The only thing that changed are their in-game descriptions - that nasty, custard-crashing "&" shouldn't bother us anymore

Thanks very much, it works perfectly and I shall now load up my game!
Menaceman44
Mad Poster
THANKS POST

Thanks for uploading the newer version as I couldn't even get the installer to recognise the first file.
ladypieta
Test Subject
THANKS POST

Amazing!! I love the new showtime spanish colonial! Thanks for sharing

Love it thank you!
ghostgreen
Test Subject
THANKS POST
#14

thanks so much for including a version without World Adventures! it's the only EP i don't have. cheers
sanetjansen
Test Subject
THANKS POST
#15