by Dazro Posted 10th Apr 2012 at 3:44 PM - Updated 6th Jun 2015 at 9:08 PM by Dazro
72 Comments / replies (Who?) - 8 Feedback Posts, 16 Thanks Posts
Picked Upload! This is a picked upload! It showcases some of the best talent and creativity available on MTS and in the community.
Dr. Liara T'Soni is an asari researcher who had spent most of her life studying the ancient Protheans. After discovering the true nature of their extinction and stopping the nasty reaper Sovereign, she located and defeated the mysterious Shadow Broker and took his job.

For my very first upload ever, I decided to chrun out Liara T'Soni from Mass Effect. Making her was fun and I think I got her pretty close to the actual game. You'll need Annoree's Asari Genetics Set for the asari skins/hair meshes, and escand's Oh My Tiffany eye contacts (download link below) She is packed with default skin/hair/eyes, so you'll have to select her asari features through CAS. 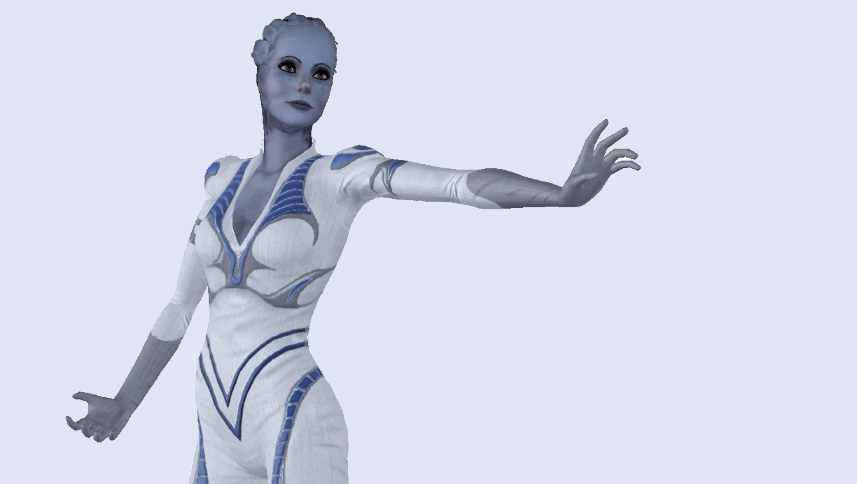 I tried to make Liara's clothes look significantly alien and futuristic, and her entire wardrobe is base game apart from everyday, because the closest I could get to her outfit was the cyber-suit that came with Ambitions, but if you don't have it then the game just works around it and you can give her another outfit. 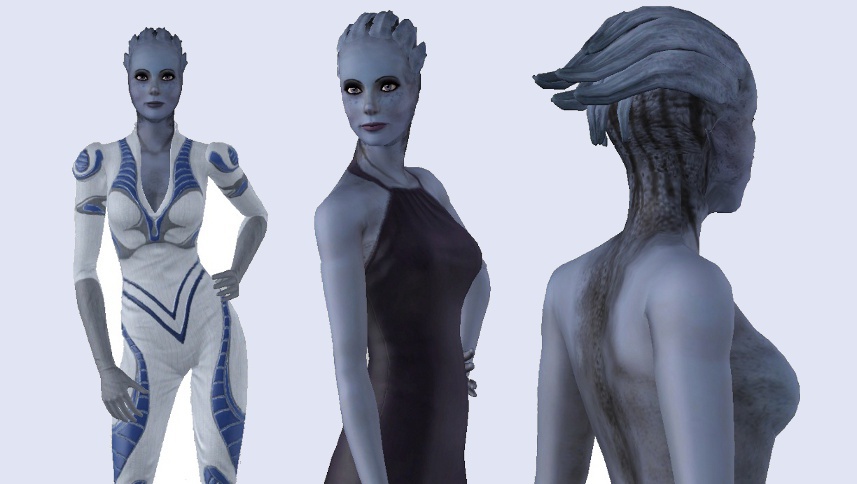 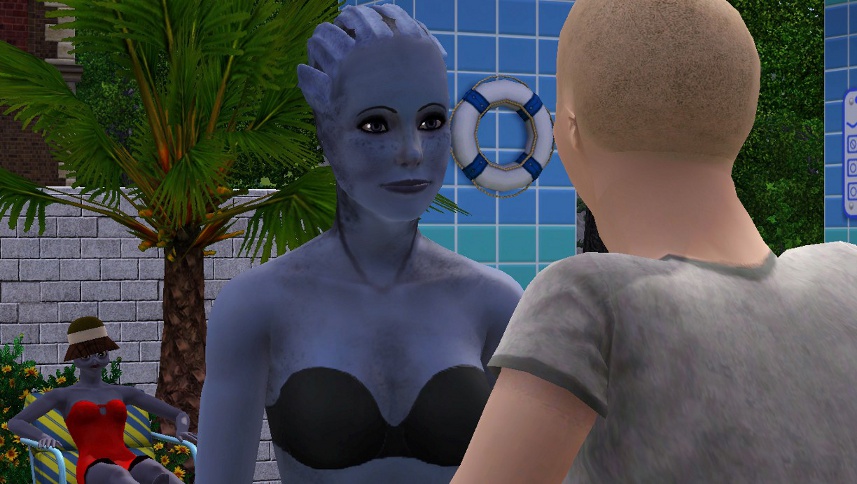 Back to download view
72 Comments / Replies (Who?) - 16 Feedback Posts, 53 Thanks Posts
Hide Thanks Posts for this thread (Show only feedback)
Page 1 of 3
myhily
Test Subject
THANKS POST
#2

And here I was waiting for the dlc. Thank you!
clynnc19
Field Researcher
THANKS POST
#3

now all we need is Shepard and I'll be a happy camper!
budwinys
Field Researcher
THANKS POST
#4

You did a really, really good job. I''m still playing ME3 and waiting to see if the ending is really atrocious or not. I'm downloading Liara to comfort me if it is.
yilesse
Test Subject
THANKS POST
#5

Awww, lovely Liara. Thanks for making her.

Loves this thanks for the upload.
allison731
Inventor
THANKS POST

I'm really sorry if it's just a really weird coincidence, but I can't help but notice that your Liara T'Soni looks a lot like mine version - http://d3n1zftw.deviantart.com/art/...ims-3-291160555
Just a coincidence? I don't think so..
NatSoteris
Test Subject
THANKS POST

This is amazing! She looks spot on. <3

And other then the outfit and the fact you both used the same genetics set, your and
D3N1ZFTW's look very different.
Tee Hee She

Dazro thanks for making this, such a fan of the character and am delighted to include her in my little pixel dolly world! :D

They're aiming to be the same person, of course they look similar! Thats a good thing right? If they both looked wildly different one of you must have got something not quite right surely?
My Humble Simblr of Bizarre Buildings
Eternila

Quote:
Sorry for any misunderstanding

Dazro's sim is also really beautiful. I have to say that she does look like Liara T'Soni (unlike my sim

)
Altough I see that the creator also didn't listed out her traits :P
But it's just that he used the same asari set (that probably nobody would ever know, if I didn't released my sim) and the ambitions outfit. Dazro might not have used my sim, but I don't believe that he didn't referenced some parts of mine version of Liara.
megalupin7
Test Subject
THANKS POST
#13

Apart from the genetics set and uniform, I can't say they look that alike. It is only natural that if two people try to recreate the same character, using the same source material that there will be a degree of overlap. It doesn't just mean they used your version because you did it first...
It's more likely that he referenced Liara rather than a reference to Liara. It seems pointless to copy a copy when you could just do the real thing, so readily available via google search.
Catastrophics
Lab Assistant
THANKS POST
#14

"But it's just that he used the same asari set (that probably nobody would ever know, if I didn't released my sim) and the ambitions outfit."

It isn't exactly hard to find the skin. Going to Google and typing "Asari Sims 3" will bring it up as the first link.

Anyway, this is a really good likeness! Thank you for sharing.
Nysha

Thankyou, everyone, but any suggestion of theft will be assessed and decided by staff only - a kangaroo court isn't going to help, so please stick to comments related to just this sim for now.

What I lack in decorum, I make up for with an absence of tact.
Esmeralda
Mad Poster
THANKS POST

I searched for some sims 3 asari before I made mine to see what other people did, that's how I found the asari set. But I made my liara from scratch, I wouldn't steal someone's work and say it was mine.
Dazro
Lab Assistant
DELETED POST
Original Poster
11th Apr 2012 at 8:36 PM

Quote:
Thanks! Love your stuff.
KiaraRawks
Forum Resident
THANKS POST

Love this soo much. I just got off multiplayer (slayin as usual), and when I play the game I always make sure to include Liara in my squad. I know this may not hold much merit, but I believe yours and D3N sims look nothing alike aside from the ambition gear and skin.

Also, do you think it possible you could make both male and female shepherd? That'd be really nice to have in-game and create a couple with Liara.
Superion
Test Subject
THANKS POST
#20

was thinking when she would be created , she's mint , thanks =D
xecari
Lab Assistant
THANKS POST
#21

Oh my gosh, this is lovely! Are you thinking of making Ashley and Kaidan? I spent forever trying to create Kaidan and finally had to give up. But thanks for this either way!
gurololicon
Test Subject
#22

This doesn't look very much like Liara. Her cheekbones are all wrong...
The hair looks nice, though.
locustgate
Test Subject
THANKS POST
#23

um the hair isn't showing up, it bald
Avey
Test Subject
THANKS POST
#24

Quote:
You must select the "Asari hair" manually