by Stepper Posted 30th Dec 2012 at 2:44 PM - Updated 2nd Jan 2013 at 11:05 AM by Stepper : Added link for the eyebrows
15 Comments / replies (Who?) - 4 Feedback Posts, 11 Thanks Posts
Picked Upload! This is a picked upload! It showcases some of the best talent and creativity available on MTS and in the community.
Hello, everyone! I'm excited to present my first upload here at MTS! This was an interesting sim to make, as he's really more like two sims in one! (More on that later...) 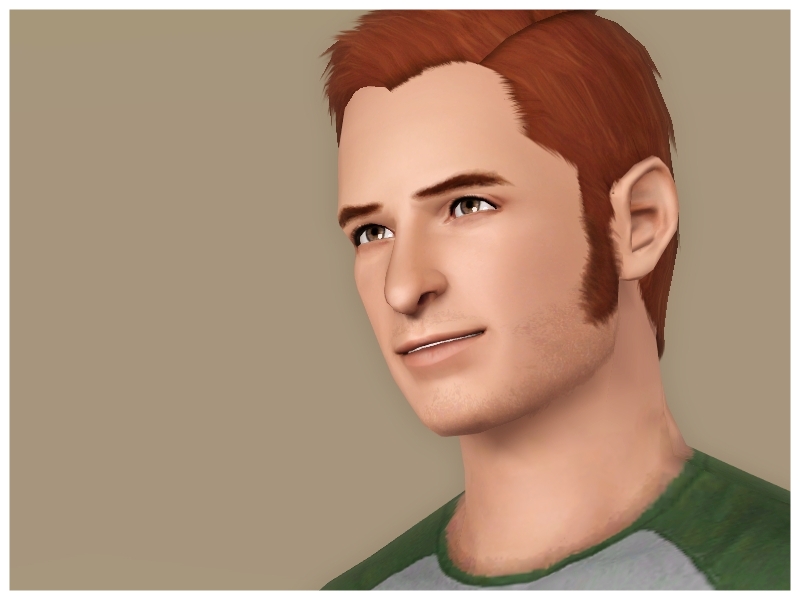 Jessie finds happiness in the simple pleasures of everyday life-- even doing the laundry can be exciting if you put your mind to it! He loves to hear what others have to say, and he'll go out of his way to make someone feel special. With a sunny smile and a few well-chosen words, he can brighten anyone's day.

Some might say he's stubbornly optimistic, the way he maintains a positive attitude even when he trips over his own feet or causes yet another kitchen fire (the third time this week), but he just tries to look at the bright side of things. The kitchen will look better with a new stove, after all!

What Jessie really wants most in life is to win the heart of the sim of his dreams, someone whose happiness he could devote his whole life to. But will he live happily ever after, or will some unscrupulous sim take advantage of his good nature and leave him broken-hearted? 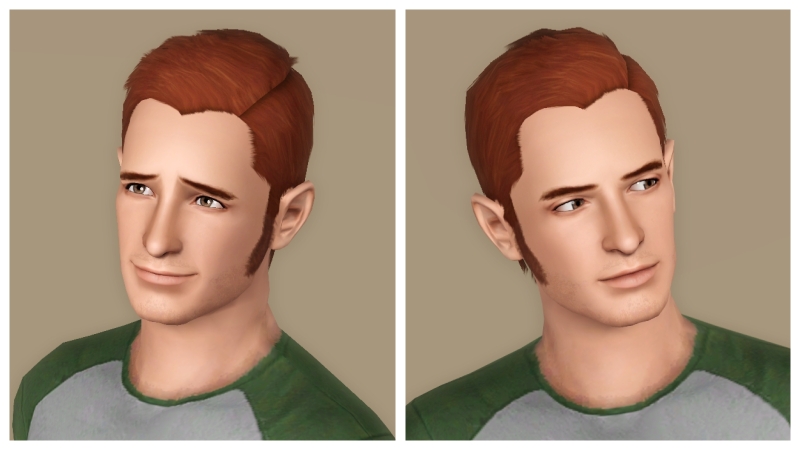 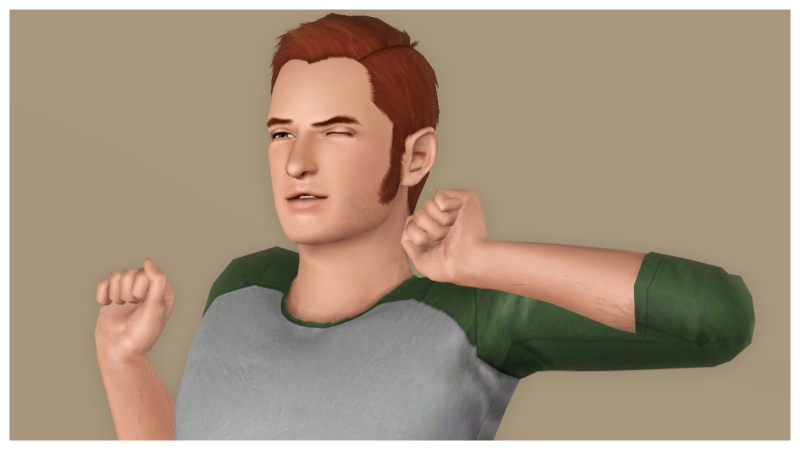 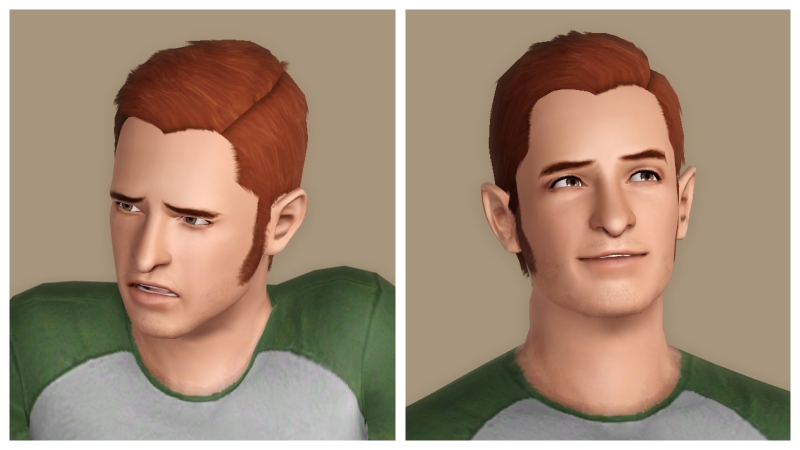 As an added bonus...

)
While he was primarily intended to be used as a male sim, I very carefully designed him to have features that translate well to female sims. Why? Because I was getting a little frustrated that great-looking male sims often ended up with... unfortunate-looking female offspring (to say the least). Since Jessie works well as either gender, you won't be getting any "surprises" with his offspring. I've included some comparison shots of Jessie as a female at the end of this post so you can see for yourself.

Who knows, maybe you'll decide you'd rather use Jessie as a female in the first place?

** This sim is packaged with default skin. For him to show up exactly as pictured, you must download the non-default version of the skin linked above and manually apply it in CAS (or use the default version).
** His hair is from HELS but you do not need HELS for him to show up in your game; if you don't have HELS, you'll just need to pick another hair for him in CAS.

If you intend to make any changes to his facial features in CAS, you'll need these sliders to prevent his face from snapping back to pudding form. Otherwise if you don't plan to make changes to his features, these are optional.

Chin Width Slider by GnatGoSplat
Body Sliders by jonha
Facial Sliders by bella3lek4
Sliders by aWT. However, some of the original links are dead so you can get them all here.
Chin to neck slider by Heiret, which has been re-uploaded by Arisuka here (on the downloads tab).


Here's a list of the actual sliders I used from those sets, in case you don't want to get the full sets:

I'm about 96% sure that's correct, but if I missed any it shouldn't make a noticeable difference.

Additionally, you'll need a mod that includes a slider hack such as Awesomemod or Twallan's MasterController.

Increased Shine by HystericalParoxysm
Custom Eyelashes by S-Club Privee
** He is packaged with the default EA eyelashes, but I've adjusted the custom eyelash sliders to fit his eyes if you want to use these.


Special Thanks to:
FREEDOM_55, for the wonderful advice and encouragement.

Additional Thanks:
Elexis, Redhead Creations, all the positive feedback from CFF. I really appreciate it!

Back to download view
15 Comments / Replies (Who?) - 3 Feedback Posts, 11 Thanks Posts
Hide Thanks Posts for this thread (Show only feedback)
Pokesimaniac
Lab Assistant
THANKS POST
#2

Really good idea with making him look nice as a female too! I try to do that sometimes, but I still struggle a lot. You pulled it off perfectly! Thanks for a great sim.

Oh, he's cute! And I love that he looks good as a girl, too. Can't wait to see what his offspring looks like! Thank you for sharing. =D
Stepper

He's absolutely handsome! I can definitely use him in my new hood that I'm building.

I just noticed that I forgot to include a link to the eyebrows I used, which has now been fixed. No need to redownload, but you may want to get those brows if he didn't look right.
FREEDOM_55

He /she is beautiful ..and so alive!
This is sincerely very good for your first upload. You have natural talent.You should upload sims more often

This sim was love at first sight! I barely ever download sims, as I love creating in CAS (for days on a single sim, actually), but him, I simply had to have.

Thank you!
I gave him a makeover though - I prefer using my own skintones, brows, hair, makeup etc., but I haven't touched any of his features!
I can send pics, only if it doesn't offend you!!!
Astuleae
Test Subject
THANKS POST
#10

He is so similar to my friend's boyfriend :DDD
Stepper

FREEDOM_55: Thank you very much! I'm sure I have a few sims sitting around my bin that would make good candidates with a little tweaking.

whitequeen73: You're welcome! And I don't mind at all if you've changed his appearance; I'd love to see how he looks in your game.
AliceIn
Lab Assistant
THANKS POST
#12

Love that you made it so he looks good as a female, too! I, too, have a heck of a time making sure that the offspring of my Sims don't look terrible (thank heavens for cheats to edit them in CAS)! I like your solution a lot--it seems like it'd work, and it makes me smile. :D
Hellfrozeover
Tartan McBadgerface
THANKS POST

Thank you <3 He's going straight into my game, I love him

Wow, they're both verrry nice. I don't normally download Sims, cause it's great fun to play with the sliders, but you convinced me. Thanks so much.
Dragonflysparkles
Field Researcher
THANKS POST

Does anyone else think he looks kinda like Orlando Bloom from about ten years ago? It's the eyes. I love him. He's totally adorable and makes a cute fem too. Thanks!