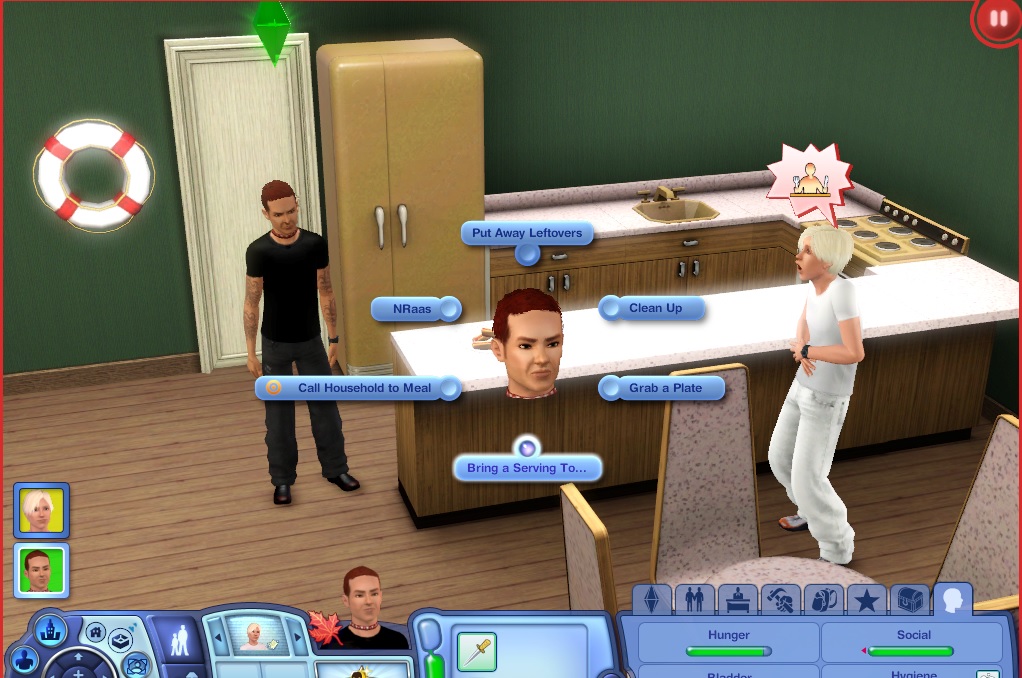 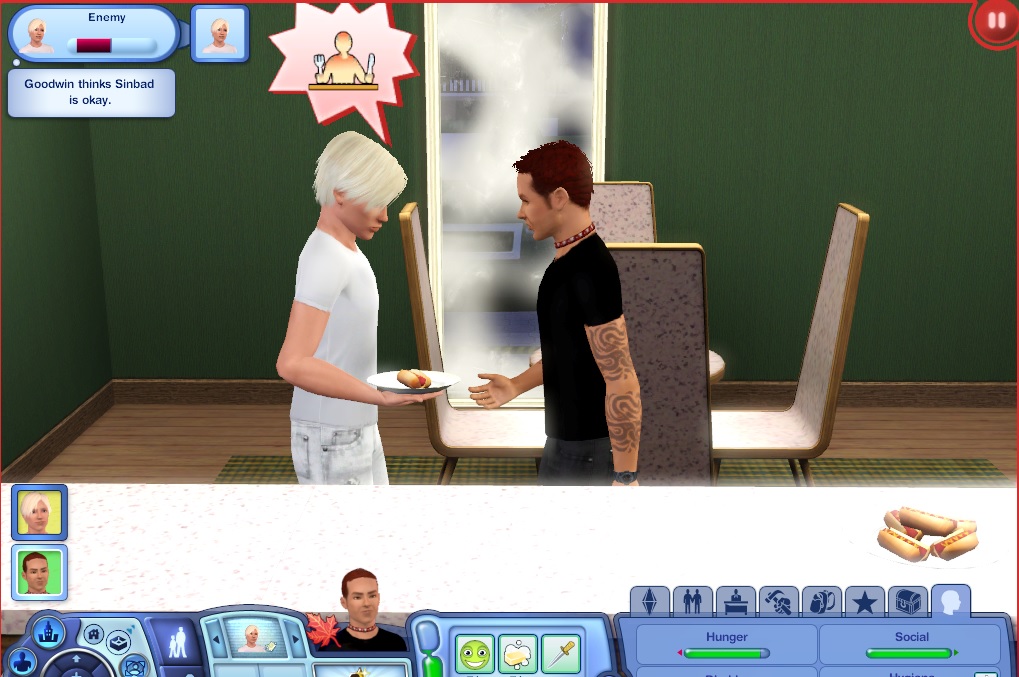 13-JUL-2016: Simplified some more code and fixed the animations used when adult sims pass cocktail glasses to one another.

10-JAN-2016: Interactions should no longer appear on foods on display in any of the shelves and displays from the Deliciously Indulgent Bakery store set.


9-MAY-2015: The interaction to bring drinks to another sim can now be used directly from the active sim's inventory.

5-APR-2015: Removed some more code that is no longer needed. Put In Inventory interaction should no longer appear on servings of food on buffet tables. The interaction to bring a snack to another sim should now be usable from a sim's inventory as well.

10-AUG-2014: Managed to cut out a huge chunk of unneeded code for (hopefully) better performance.

To anyone also using the Get Moodlets From Meal Ingredients mod, please redownload the very latest version of that mod (since I made the same mistake there as well) or the fix here won't be applied.

To anyone also using the Get Moodlets From Meal Ingredients mod, please redownload the latest version of that mod or the following changes to this mod may not be applied

20-APR-2014: Various bug fixes. Removed the interaction override for bar trays since I felt the interaction is rather redundant (just click on the individual drink glasses/cups and use the Bring Drink To interaction from there) Also removed the optional package since it is now obsolete.

17-APR-2014:
9-APR-2014: (Main mod only)
No longer allowed to bring food/drinks to active sims in resorts who are not checked in (trying to do so usually glitches the sim out.)

The "Bring A Serving To..." interaction now shows up on foods on buffet tables (regular and resort). It should show up when you click on the plates (not on the buffet table itself). Thanks to fxchrfxchr for the suggestion

Added the "Bring to..." interaction on snacks as well. You'll have to put up with Child sims not being able to hold juice boxes properly during the interaction though

When looking for a way to pass food from one sim to another, I came across the Bring To... interaction in the code and found it odd that I've never seen it in the actual game... The reason turned out to be that by default the interaction can ONLY be used on Late Night bars/clubs/lounges or by a sim hosting a party, which I find unnecessarily restrictive. So this is a script mod which replaces the Bring to... (for foods and drinks) and Bring a Serving to... (for group servings) interactions with versions that can be used anytime anywhere, unlocking them for everyday use.

Handy for passing food/drink to a specific sim to eat without resorting to the Call To Meal interaction in cases where you don't want the whole household to swarm to eat at once. Plus the interactions have the added bonus of being positive social interactions, so there is a slight relationship increase between the sims when one brings food or a drink to another (despite what the second screenshot looks like...). And don't worry, these are user-directed only interactions so you don't have to worry about inactive sims spamming you with food and drinks.

In addition, all these interactions have been unlocked for children as well and quite some effort was put in to make sure they don't stretch and distort while performing them.

Requirements; Only requires the Base Game. Thanks to AmazingSims for confirming this

Uninstalling: Make sure there are no sims using any of these interactions at the time of saving (since it is a non-autonomous interaction you should only need to check your active sims) before you remove the mod.
Tags: #food, #drink, #social, #unlocked

Built with Game Version: 1.63.5.024
Key: - File was updated after upload was posted
Need help with downloading or installing content? Click this link!
Don't forget to Thank the creator after downloading! Use the Thanks button located above the screenshots above.
Basic Download and Install Instructions:

See: Game Help:TS3 CC Basicswiki for a full guide!
Back to download view
82 Comments / Replies (Who?) - 24 Feedback Posts, 57 Thanks Posts
Hide Thanks Posts for this thread (Show only feedback)
Page 1 of 4
thesimmerguy
Test Subject
#2

Great! Thanks very much! Would this also apply to food on a buffet table?
DarkWillow76
Test Subject
#5

this is so great!! I used this interaction a lot on my Sims 2 Xbox game and I really missed it. And this is perfect for when I have guests that are complaining of hunger and too dumb to go get something to eat. they usually just take off and go home. now I can just do this!! YAY thank you! is this action autonomous? will I ever find NPC's bringing food and bar drinks to one another? That would be adorable.
icarus_allsorts
Field Researcher

It does now, thanks for the suggestion

Quote:
I've coded it to be non-autonomous to prevent the possibility of the interaction being spammed by inactives sorry
simspy2
Test Subject
#7

Thanks. This is a great MOD. Will this allow my sim to directly servce things like poison apples and bladder flow conctotions to a sim?
barbarat
Top Secret Researcher
THANKS POST

This is great. Never cared for the call family to meal...half the time they are not all hungry anyway. What an awesome job you do on your mods icarus. You have been so much help to all. Thanks again.
Best_Leopard
Forum Resident
THANKS POST
#9

Awesome! I wanted something like this for the longest time!
icarus_allsorts
Field Researcher

Thanks for the comments guys. I've updated the mod a bit so those who want the new features will have to redownload. Sorry for springing an update on you all so soon ;P


Quote:
This mod doesn't... But there MAY be a mod that does some time in the future...
SamIAm2
Field Researcher
THANKS POST
#11

Thank you so very much for this awesome mod!
stevset
Lab Assistant
THANKS POST
#12

Thanks Icarus for this amazing feature.
AmazingSims
Lab Assistant
THANKS POST

wow, I have missed this action more times than I can count, thank you :)
~MadameButterfly~
Mad Poster
THANKS POST

I can't wait to get it in game

It's long expecting. Thanks a lot.
Daethaqt3000
Lab Assistant
THANKS POST
#18

WOW brilliant, this is what I need. Thanks a lot. :D
shmovese
Forum Resident
THANKS POST
#20

I am unable to say how often I thought that such a mod would come in handy while playing the game. thanks a lot icarus_allsorts!
ganymede30324
Field Researcher
THANKS POST
#21

Thank you! Never would have thought of this, but now it just seems perfect!
gbermudez
Test Subject
THANKS POST
#22

Much needed mod, I hate when there's a sims that's hungry and won't eat,now I can give them food, thanks
ani_
Mad Poster
THANKS POST