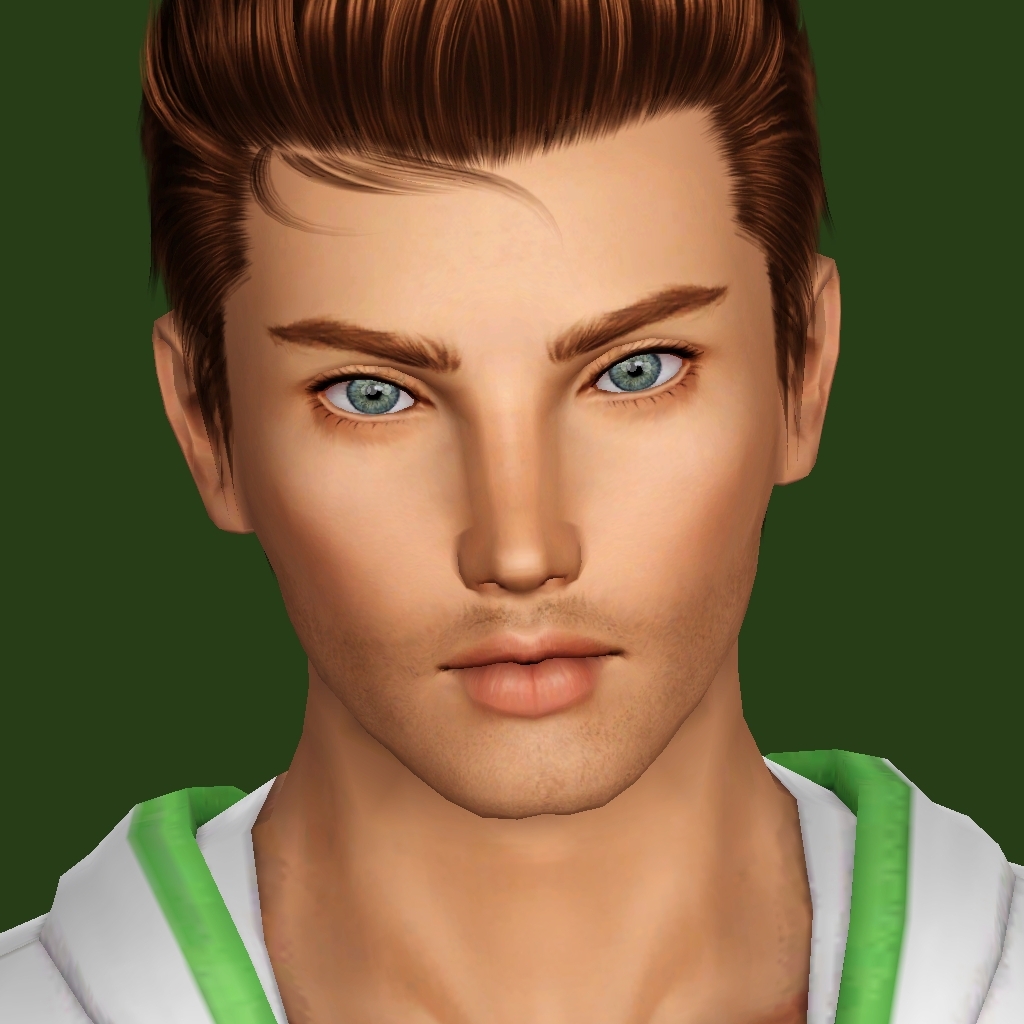 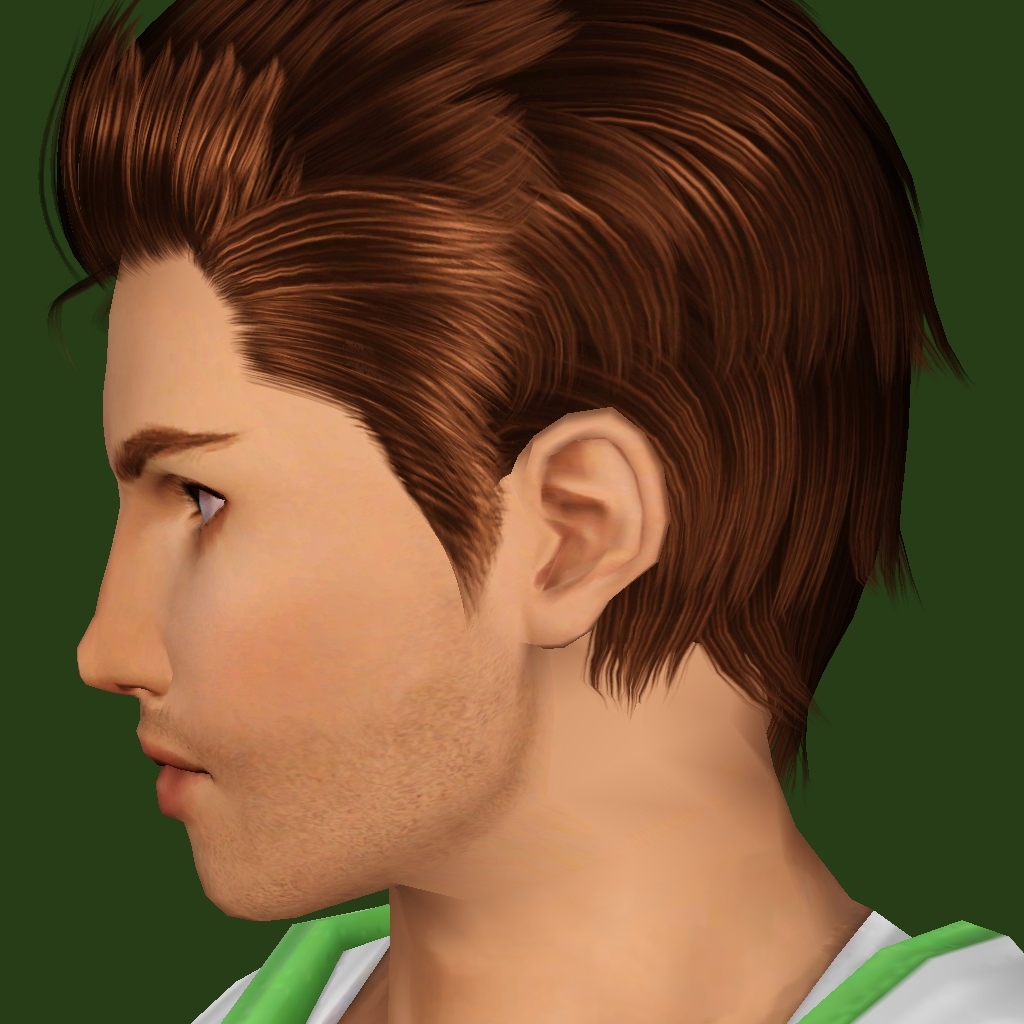 Hey all this is the one, the only, Mark Lemoray. He was featured in my story about my new haunted future house for modern day. You can read more of his story and download the future househere. It's haunted because it has a small graveyard with two graves of his actual descendants. If you like Mark, it may be worth downloading just to see his descendants.

This guy is actually a born in game sim from two sims I didn't upload here. I uploaded them months and months ago onto the exchange before I uploaded here. If you want their download links, I can find them for you.

I admit that I did edit him a bit, but I just moved his nose up a notch. Sometimes you have to change sims just a tad to get them how they were 'meant to look' 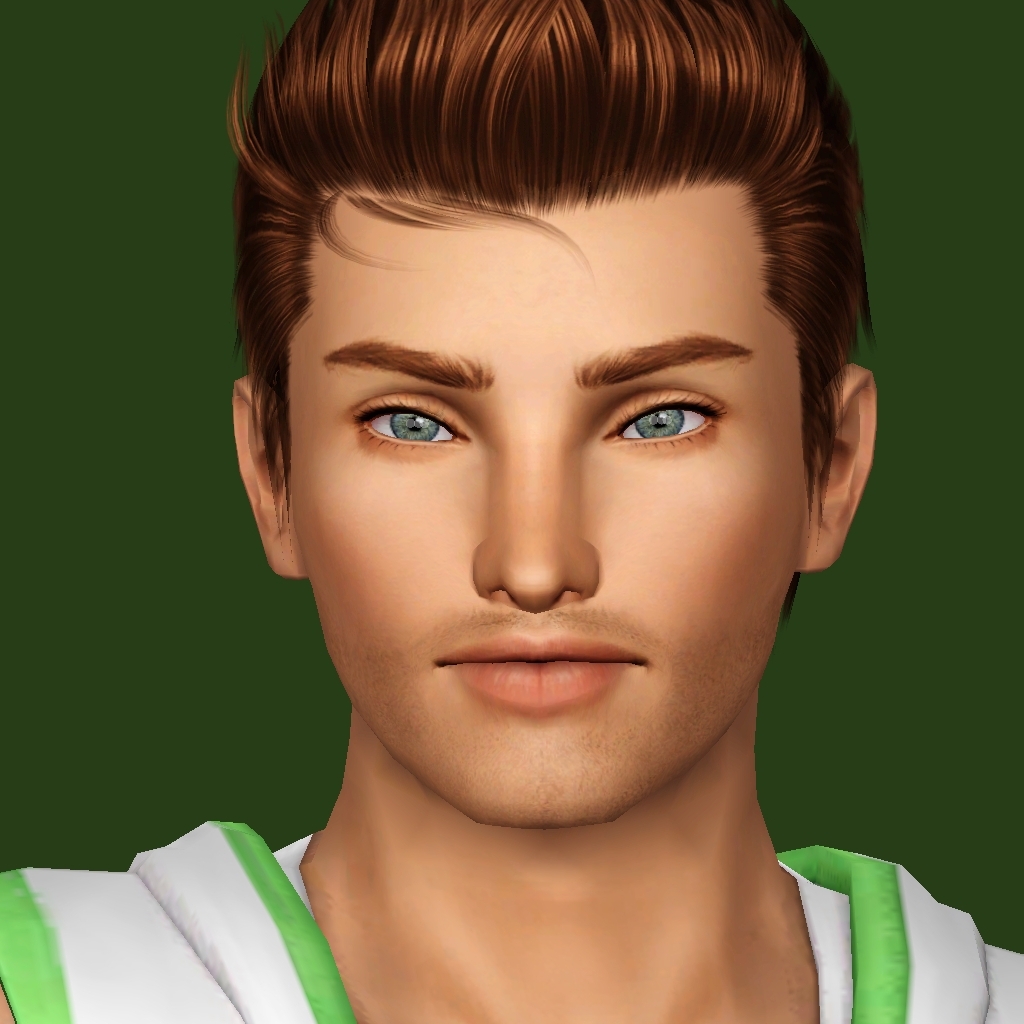 Mark is an all around happy kind of guy. Most people like him because of that. His favorite things in life include traveling to the future (which he really doesn't talk about since only those in his family can travel to the future (the why is answered in the future house thread)). He enjoys all of the technology of the future and utilizes it as much as he can.

He also enjoys scuba diving and basically anything outdoors. Wanna go hiking, fishing, biking? Mark is totally there! He is also a good reactor to stories since he gets excited very easily... There's also the fact that he is a witch. He enjoys utilizing his powers to make life easier, and to help other people. He hopes to one day have enough money to become a philanthropist. He hasn't yet, but he thinks he may even try dabbling in inventing, as if he wasn't well round enough. 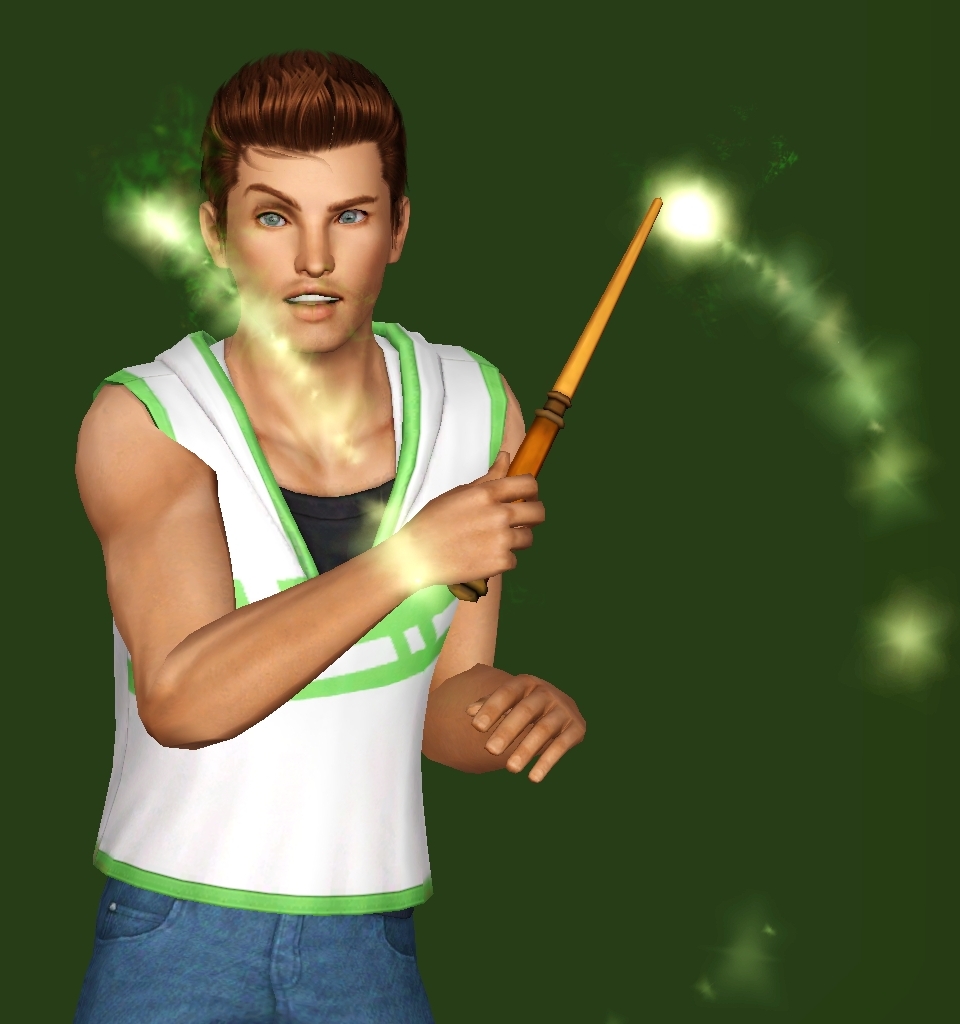 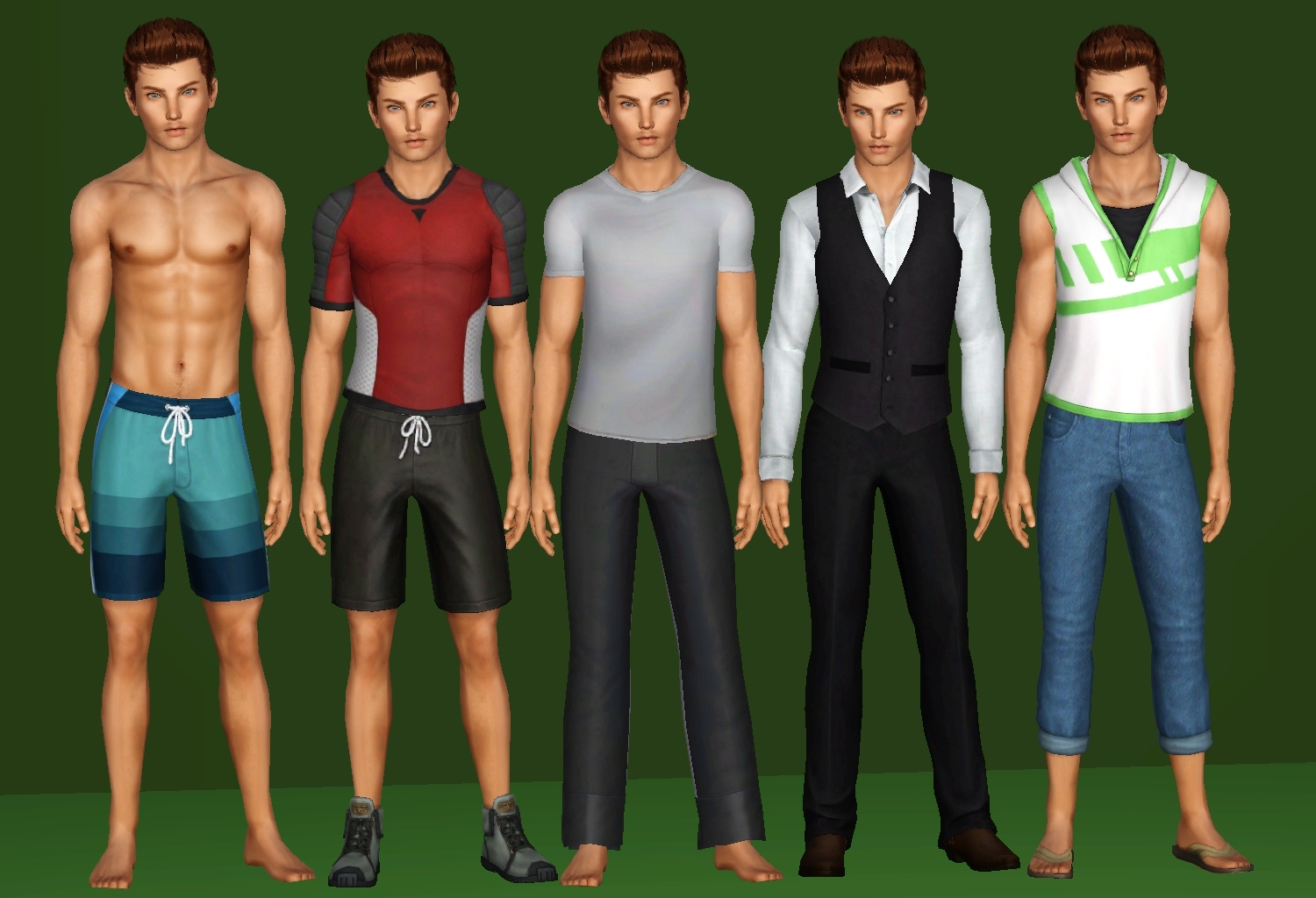 *I made sure to save my sim without the non-default skin. If you use the default version of the skin, his features will look the same, his skin will just be a different tint.

He also has the stubble from late night, and if you want him as a witchy, you'll obviously need supernatural. However, he is a well rounded guy, so that isn't pertinent to his personality

facial sliders (by bella3lek4)
Body Sliders (by Jonha)
Eyelashes and its sliders (by sclub)
Make sure to download both the sliders, and the male eyelashes at the bottom of the download page!

I use master controller as my slider hack to get his face to look like this (facial sliders on x3, body sliders same as default), or you can use some other slider hack. MC is found here
Tags: #witch, #future, #futurist, #island paradise, #good

Back to download view
24 Comments / Replies (Who?) - 5 Feedback Posts, 18 Thanks Posts
Hide Thanks Posts for this thread (Show only feedback)
Tigerdyhr

But he's not wearing the stone island jeans?
simsgal2227

Ah right, I was going to edit those out, thanks Tiger. I just copy-paste CC info from past sims and take out what doesn't apply, but I forgot that one!
FzzyDg8
Scholar
THANKS POST
#4

Well, isn't he a cute one! Thanks for sharing Mark, he's coming home with me.
SilentApprentice

He is a very good looking sim, but I won't be downloading him. I despise sliders and refuse to download any sims that have to have them, unfortunately they are very hard to avoid anymore. Nice work though.
Chicken Scratch
mamxnb
Lab Assistant
THANKS POST
#6

great looking sim there. love to get back to supernatural so he be a good excuse to do so
simsgal2227

Thanks,for all the comments on Mark

Hmm, I understand. Some sims have lots of,sliders, and they really clog up your game, especially if you don't make sims. As a sim maker, they help make sims slightly different. But if you don't make sims, they probably don't make much of a difference for you. I can also see how you don't want to clog your game up with sliders. For my sims, you only need the body sliders and the facial sliders (sometimes a chin cleft or ear lobes, which aren't important), so it isn't too much. You do often need to edit in game with master controller though if there are too many sliders, and I can also see that could be annoying for some people. It's not such a big deal for me, obviously.
Pink_Pwincess
Field Researcher
THANKS POST

Someone should correct me if I'm wrong, but I believe you only need sliders if you want to edit the sim.

Great work on this sim, though, thank you for sharing!!!
simsgal2227

Yes you're right, but I can still understand not wanting to download the sim because it has sliders. I assumed she knew that, though I suppose she may not.

While you might not want to change Mark, I figure you may want to change his kids, and they will probably have features altered by the sliders too.
jessesue
Lab Assistant
THANKS POST

Finally got a chance to download him. Well done!

Thanks for taking the time to share/make him. c:
IGORFARAH
Test Subject
THANKS POST
#16

he looks so good
Ruddos
Test Subject
THANKS POST
#18

He is a cutie! I am such a sucker for red-headed boys.
ClaireJhonson123
Test Subject
THANKS POST
#21

ok I am blonde in rl what are sliders ?
simsgal2227

Sliders are the tools used to change features on a sim in CAS. Eye height and weight, for example.