by Flora2 Posted 26th Dec 2018 at 6:51 PM
12 Comments / replies (Who?) - 5 Feedback Posts, 7 Thanks Posts
My small contribution to the "Let's Build Boroughsburg" project (the custom world created by jje1000, link here ) - an amazingly raw and gritty-flavored urban decay neighborhood, which has only a minimal number of actual residential lots, so we who play it, are working on sharing as much as we can with each other. This lot is based on the typical brownstones of Brooklyn Heights, which is a more upscale environment than Boroughsburg, so maybe too flashy here, but I tried my best to tone it down a bit to Boroughsburg. But of course, it can be placed into any other urban Americana environment.

I used no CC, no Stuff Packs, and not a single piece of Store items, and it requires only 5 EPs: WA, LN, AMB, UL and IP - these are the only five EPs that are needed for Boroughsburg. 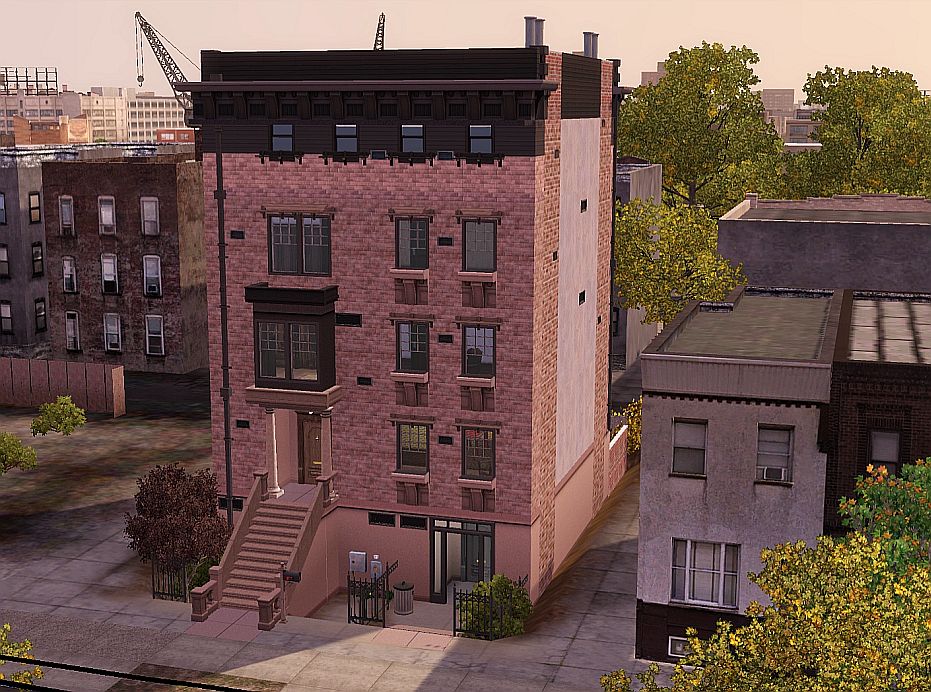 If you ever watched the TV show series Elementary (the modern American New York version of Sherlock Holmes) you will find the interior furnishing familiar: the room arrangements and the interiors are heavily based on those that can be seen in the show, since, according to the lore of Elementary, Mr. Holmes lives in Brooklyn Heights in a brownstone owned by his father. 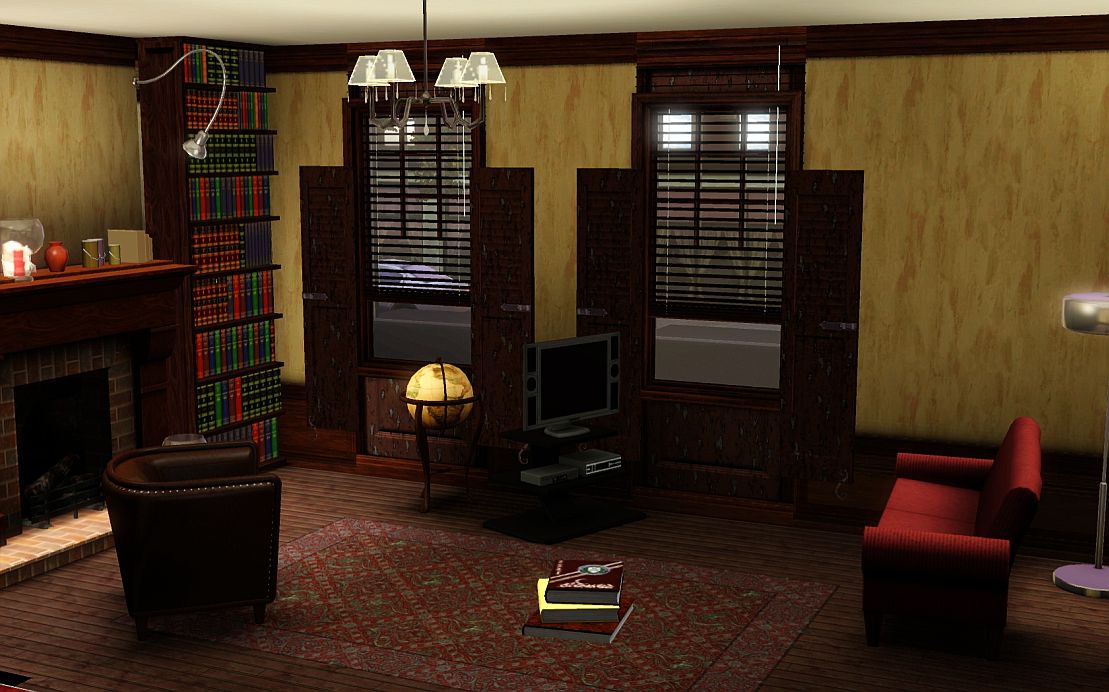 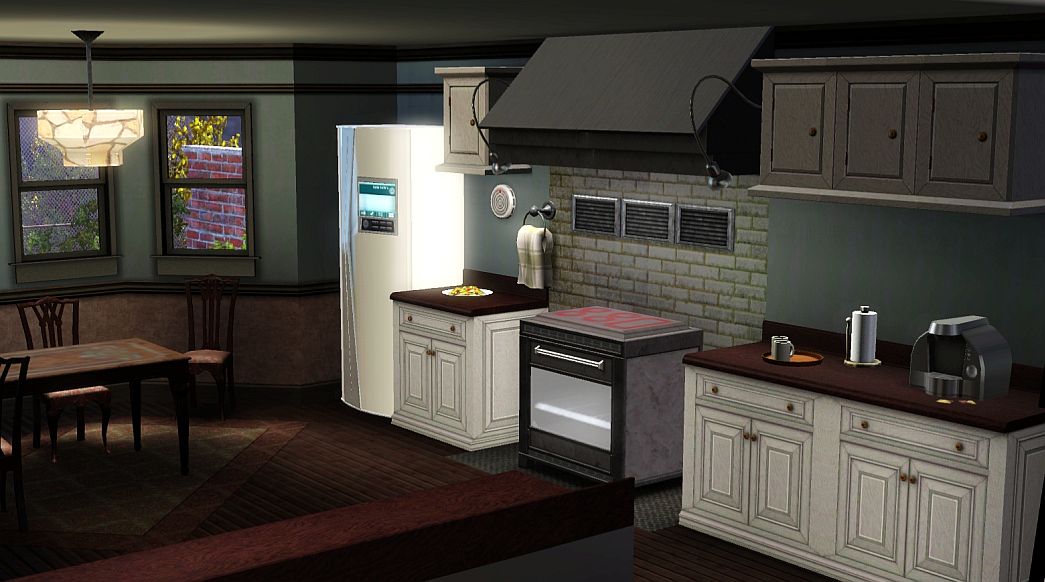 This townhouse is not an apartment building, it is owned by one household from head to toe; has 5 floors altogether: the lowest, "garden level" floor has the kitchen with dining, two storage rooms and an exit to the tiny back garden. The second, "main" floor is entirely a living room area with a strong "investigating" vibe. The third floor has two furnished bedrooms with two bathrooms. The fourth floor is also a bedroom/bathroom floor but it's unfurnished currently. The fifth, "attic" floor is unplayable, decoration only. - The lot ground is flat around the edges!

Boroughsburg has several 15 x 25 size residential lots, this lot should fit on any of them.

Playtested! Necessary EPs: World Adventures, Late Night, Ambitions, University Life and Island Paradise. However I must warn you that it's possible I used Create-a-Style patterns on the objects from other EPs (in CASt, I can't say which pattern belongs to which EP, and I also have GEN, SHT, and Seasons).

Additional Credits:
- jje1000, the creator of the custom world Boroughsburg, the neighborhood that can be seen on my pics;
- the art design team of the TV show Elementary for the interior inspiration;
- (the screenshots from Google Street View and the TV show are all shot by me).
Tags: #townhouse, #brownstone, #Victorian, #urban, #city, #New York, #Boroughsburg, #Elementary

Built with Game Version: 1.67
Key: - File was updated after upload was posted
Need help with downloading or installing content? Click this link!
Don't forget to Thank the creator after downloading! Use the Thanks button located above the screenshots above.
Quick Guide:

If you need more info, see Game Help:Installing TS3 Packswiki for a full, detailed step-by-step guide!
Back to download view
12 Comments / Replies (Who?) - 4 Feedback Posts, 7 Thanks Posts
Hide Thanks Posts for this thread (Show only feedback)
Nilxis
Field Researcher
THANKS POST

I love it! It has a lot of personality, like all your other buildings

I have been in real life Brooklyn brownstones (what NYC calls them) and you have really captured their essence.
simsmidgen

Love! Thank you so much

thank you so much for sharing this. I hope this won't be the last lot for Boroughsburg. I really need more cc free lot's for this city

I just have to say that your TS3 builds are my absolute favorite. TY!
Flora2

Thank you for your comments, fellows, and I also thank for the other Boroughsburg lots that you have shared so far!
Crowkeeper
Instructor
THANKS POST

Thank you very much for constantly coming up with these amazingly creative lots! I love your style

I love your buildings sooo much. It's such a shame that I'm not using TS3.

I almost feel like recreating some of your lots in TS2...
Did I really say that?
- Well, at least yesterday is behind us now.
/Jonipoon
Flora2

Your Blade Runner Street is one of my favorite downloadable MTS lots, and you know what? I try to build something like that for months in TS3, just not with a neon cyberpunk vibe but with an everyday contemporary Tokyo city alley flavor - and I can't do it. I'm close to give it up, so, to be short: I have much to learn from you!

Quote:
This warms my heart!

I'm sure you can do it, just don't give up. I'm really curious on what you'll come up with!
Did I really say that?
- Well, at least yesterday is behind us now.
/Jonipoon
Starby
Test Subject
THANKS POST
#13

I am raiding your whole studio for these brilliant biudls! Thanks for sharing