Hansel and Gretel with the Gingerbread Witch 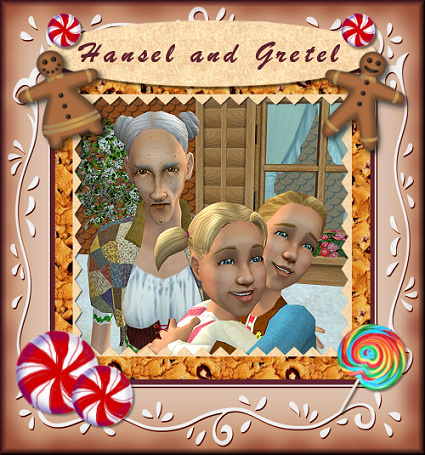 Once upon a time, in a deep, dark forest in a land far away lived two little children. They lived in a poor little hovel on the edges of the forest, with their father who was but a poor and humble woodcutter, and their rather mean step-mother.

The little boy's name was Hansel, and his sister's name was Gretel. They were very good and obedient children. Hansel was a very clever boy, and always took great care to look after his little sister Gretel. 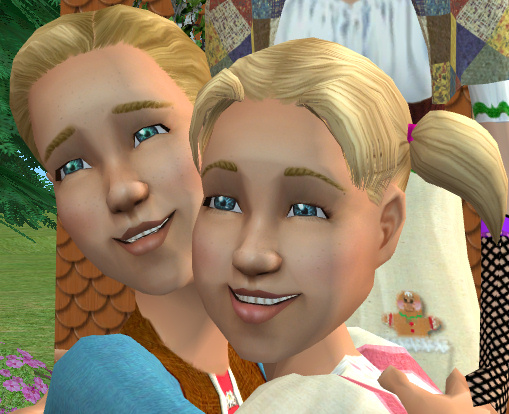 Plotting to be rid of the two little ones, the rather mean step-mother one day plotted to lead them out deep into the forest, where she hoped they would become lost and never return. How mean of her!

But clever Hansel overheard her evil scheme, and devised a plan to foil her mean-spirited plot. In his pocket he had a large handful of shiney, very white pebbles, and every so often he would drop one, to make sure he could bring his little Gretel back home again.

One fine day, off they went into the forest, following the dreadfully vile step-mother, who pretended she was taking them to gather berries. Hansel knew what she was up to, and dropped his pebbles one by one along the way.

By and by they came to a clearing, and woefully unloving step-mother settled the little ones on a quilt with a bite of bread and cheese each, saying she would go and fetch them some cool water from a stream. Oh, the wicked liar! Off home she went, leaving the two little innocents stranded.

After waiting a good long while without the step-mother returning, Gretel began to cry. "Don't you worry Gretel, I will take care of you, and I know the way back home, sure as can be! But, let us go and get a little water first, then we will go home and tell father what has happened."

Taking Gretel by her plump little hand, the pair followed a faint trail deeper into the forest, with Hansel taking care to drop his pebbles every little while. Rounding a bend, the two gasped in amazement at the sight that beheld them, for there down a path made of slabs of dark chocolate was a beautiful little cottage made all of gingerbread, and covered all about with candies and sweets of every kind!

As they jumped and clapped their little hands in delight, a very strange and quite hideous to behold old woman came out to greet them. She was really quite awful to see, but perhaps not quite as awful as the dreadful step-mother. She spoke to them, greeting them in a screechy, scratchy voice, saying "Hello little ones! Eat your fill from my little house! Nibble, nibble, like a mouse!" 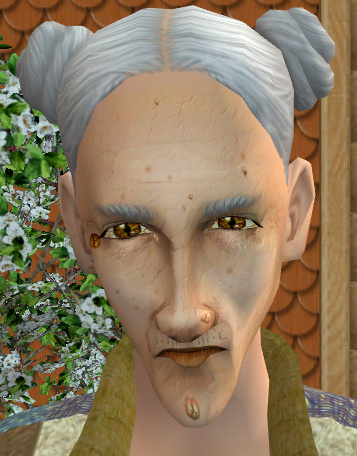 So Hansel and Gretel, who had never tasted such delights in all their years began to gobble away at the lovely cottage.

The sneaky old woman just stood and watched, her boney hands on her hips, her crookedy elbows stuck out to the sides, nodding smugly to herself, as if she knew a TERRIBLE secret! 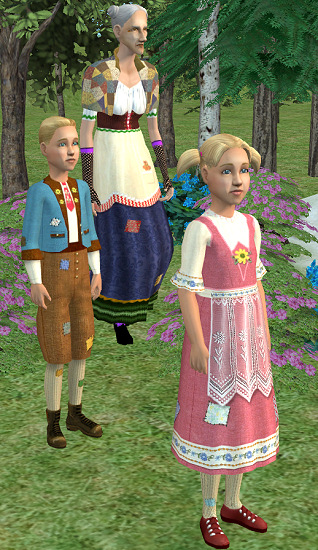 Well, you will just have to find out the rest for yourself!

In the meantime, here we have for you to enjoy are Hansel, Gretel, and the wickedy old Gingerbread witch from the famous and beloved tale told by the Brothers Grimm, "Hansel and Gretel".

Each wears a custom mesh outfit, along with custom full-face makeup.

Files listed in the downloads section include:

Back to download view
21 Comments / Replies (Who?) - 20 Feedback Posts
kelseysgr8

How adorable, and very clever! Thanks for adding the story along with it, it really added to the set-up!

Strange... Why do the mesh sleeves on the Witch scream sexy? I'm grossing myself out LOL. Great Sims.
Username: Centerman
in The Sims 4 Gallery
lukejb

Wow , great quality of the costumes, i loved that story when i was little

The witch is really a witch! Good work indeed, the costumes are so realistic as well as the details. Brava! Thank you and good luck for the constest.

Hansel and Gretel are so cute! And the witch is scary. :D
- Bre (Buckingham Alice)
Creating can take hours, days, or even weeks. Saying "thank you" only takes one click. :)
Paleoanth

hansel and gretel is one of my favourite fairytales!!!

Aww, I've wanted this for the longest time, ever since I got the very first Gingerbread Candy house from Xnem sims

It all looks like straight out of the story, you`ve really added alot of things here!
Thanks,

What a beautiful set! Very creative! Such a nice presentation too. Thanks so much for sharing your talent! Any chance of lifesize gingerbread people in the future? (like the ones I have seen in the Sims1?)
Aligeth
Instructor

I never had Sims1..were they Sim gingerbread people that acted just like Sims, or were they like objects or statue things?
jillypie
Test Subject
#18

Hi, The Gingerbread people were made from skins and they acted just like sims. Here is a link to the Gingerbread Family story on the official sims1 exchange: http://thesims.ea.com/us/exchange/d...62&action=ALBUM

Would LOVE to have gingerbread families in Sims 2! :D
SueT
Test Subject
#19

Hansel's rar file doesn't contain the mesh only the skin and the bak file. Love your stuff.
Aligeth
Instructor

Weird. Do you mean the packed Sim file, Hansel.rar? I should think it contains all he was packed with..outfit mesh, texture and his makeup.

aww this is so sweet^^
love the clothes...
we used to sing a song about them:
hääänsel und gretel verirrten sich im wald
es war so dunkel und auch so bitterkalt....
haha omg now i have the tune of that song in my head^^
zipchan

They're super cute! Thanks for the awesome Sims! :3