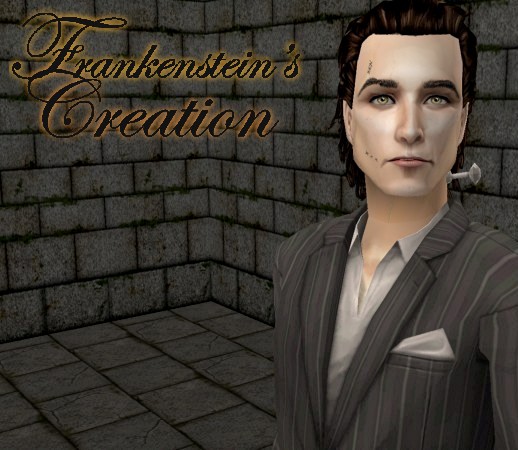 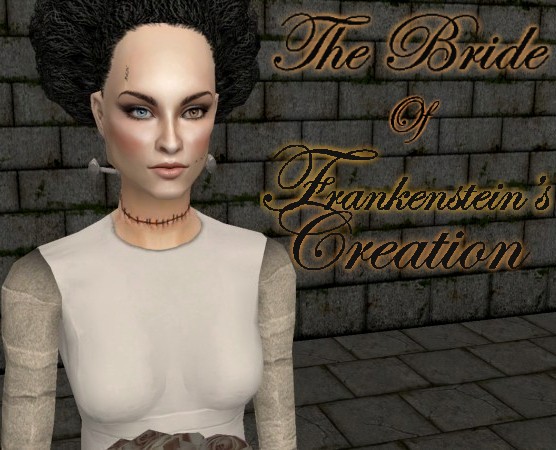 I bring to you today my take on the well known story of “Frankenstein”. I did not try and make them resemble their film counterparts completely. Her outfit and hair and the neck-bolts and are borrowed from the Universal movie version of them, but I did as I pleased for the most part, and only kept those things because I liked them.


I recently went through a break-up with my first real boyfriend of my so called “adult” life. I’ll spare you the details, but basically I’m in one of those contemplative moods at the moment. So, when making these sims, I was trying to think of a song that was a nice match for my theme of “Frankenstein”, but also had some meaning to it as well. I finally decided on “Bring me to Life”, by Evanescence. I like how the title of the song make a connection to “Frankenstein” obvious, but it also has subtle tie-in’s to the story throughout the song that work well when taken literally, and also have meaning when you think about them metaphorically… Wow… I think I just confused myself. LOL

I was also going to give a whole elaborate and cleverly written back story for these two, but I lost interest in that idea. However, I still wanted to share with you the general theme of this little “project”. The story I originally planned to write was going to focus on the idea that they had been hurt (emotionally) when they were alive the first time, and they died before they had the chance to fall in love again. After they died, and where brought back to life as human jigsaws, they fell in love with each other, and kind of started a life together in their ‘new’ bodies. The fact that they are made up of different parts of people stitched together is sort of a metaphor for ‘putting yourself back together’ after a failed relationship. Yeah, I know, it’s stupid and mushy and touchy-feely. Bite me. (Hehe..)


Oh, and on a final artistic note.... they are not monsters. I did not name them, but please don’t call them “monsters” , because they are not evil. I tried to make them beautiful and sweet looking, and I specifically tried to remove any evil, mean or aloof elements from their face. They prefer “creature”, or “creation”, because it sounds so much nicer, don’t you think? I suppose that if I had to give them names, the girl would be called “Eloise” and the boy would be “Denny”. Of course, it entirely up to you what they are called in your game.


Her hair texture is by “SUMSE”, however the mesh is by the legendary “Nouk”. Both are included with the sim. Her outfit uses a mesh by “justsims2”, and is also included in the simpack. The eyes are both by “Bruno”. The blue eye is actually her genetic eye color, while the brown is actually an accessory by “generalzoi”. I simply recolored it to use a “Bruno” eye texture. The accessory eye mesh and recolor are included.


He is packaged with hair by the fabulous “HystericalParoxysm”. His outfit is a exceedingly easy recolor of a H&M mesh. If you don’t have H&M installed, just use the Clean Installer to install him, and slap him in something you like in BS. Different types might have him wear a day coat, pants with stripes or a cutaway coat….. LOL I couldn’t resist a “Young Frankenstein” reference. Get it? “Puttin’ on the Ritz”? Oh never mind……


Last and most defiantly not least I would like to thank my dear friend “AlfredAskew”. She was so gracious to let me use her amazing button skin as a base for my creations. Not only did she allow me to use her hard work, but she was also kind enough to provide me with textures and numerous other resources. The skin used on both of these sims are a combination of her beautiful “ragdoll” skintone, the gorgeous “nobility” recolor of “HP’s” “Idolatry of the Flesh”, and my own stitching and tweaking here and there. My edits to the skin only appear on adult males and females. The rest of the ages take the form of the original “ragdoll” skintone. So, again, a HUGE thanks to “AlfredAskew”, and also to “HP”, whose “Idolatry” skintone I frequently butcher.

One more thing and I promise I’ll shut up. These sims where originally supposed to be zombies. However I recently discovered that there is (as to my current knowledge) no modification that makes a sim look normal as a zombie. So, just use your imagination, ok?
Enjoy, and please don’t steal, and tell me if you take pics or use in movies or whatever…..
~The End~

Back to download view
21 Comments / Replies (Who?) - 17 Feedback Posts, 2 Thanks Posts
Hide Thanks Posts for this thread (Show only feedback)
jamesCross73
Test Subject
#2

Very cool! I like that they look more "normal" than other ones I've seen. Great job! Can I ask where the object they are being electrified back into life came from?

They look like a horror couple, good job wicked. James this object can be found in aspiration awards which can either raise sims mood or lower it down.
Antibusdeath

Very cool! You know the Bride reminds me a lot of Olivia Wilde, not sure who the 'Creation' reminds me of.....Very good job.

"We are begging for a reflection from a shuttered heart, to find and chase us over the edge"---H.I.M--In Venere Veritas
CatOfEvilGenius

Art as therapy, great stuff. You, hopefully, feel a bit better, and we get CC.

That Evanscence song is one of my favorites, but I had not noticed the connection to Frankenstein's creation before. If you like your golems sympathetic, check out the two in Phil and Kaja Foglio's Girl Genius comic.
Please spay or neuter your pets. --- Cat Music Video! --- my meshes
Elephant

AWESOME DUDE! I LOVE your work!

CatOfEvilGenius: Yeah, working on this is exactly what I needed after the break up… it sounds silly, but it helped me keep my mind off of the whole situation, which was a good thing.

Antibusdeath: You know, I totally see Olivia in her now…… the face structure and something about the eye shape maybe…. Hmmm…. Well, there are a lot worse people for her to resemble. Olivia is quite beautiful. Thanks for pointing the resemblance out!

Elephant: Thanks! I cant wait for you to finish your WW!

Thanks to everyone else who took the time to leave a comment! I’m so happy you like them!
I don't take requests. :-)


"You with this lovely baby blue/green huge eyes and this evil touch...couldn't be more adorable" - My Vera
AlfredAskew

I am now doing a little dance for the prettiness.
harlequin_eyes

The pictures you took are awesome and totally appropriate for your creations!
raynedanser

These are absolutely gorgeous. The mismatched eyes on the bride are a great touch.
Wicked_poppies

Thanks guys! It makes me do the snoopy dance (not realy, but inside my head.. lol) when other people notice the little detils. That's why I love Alfredaskew's original ragdoll skintone so much, because it has such beautiful details to it, like the stitchng on the ears of the face.
I don't take requests. :-)


"You with this lovely baby blue/green huge eyes and this evil touch...couldn't be more adorable" - My Vera
WindsweptRose

They're so beautiful! *sighs dreamily*

Where can we find the awesome eletrified machine-thing from your preview pics? I've gotta have it for my laboratory of vicious intentions. :D

This is simply amazing.

I think back stories and personal experiences make creations like these all the more wonderful, and special as well.

(also, love the Bring Me To Life reference ^^ love that song)
When the smoke clears, you can consider us even.
MistyBlue

Lovely work, as always!! The female creation really does remind me of Olivia Wilde, she's gorgeous

Misty: Yeah, I guess i was chaneling her when i made that sim.... it was compleetly on accident. I just wanted the bride to have a strong jaw line, nicely curved eyebrows (but without looking mean, or snooty...) and great bone structure... and that was my result... so i guess that says a lot for Olivia Wilde, that when i tried to make the perfect woman, i got something that greatly resembles her.... lol...


Thank a lot, both of you guys! Thank you WindsweptRose, and omgrawr213 too!
I don't take requests. :-)


"You with this lovely baby blue/green huge eyes and this evil touch...couldn't be more adorable" - My Vera
Astrognash

Wow, these are amazing. When I first read the novel Frankenstein, this is basically how I imagined the creature, except without neck bolts.
“Nihil sacrum in comoedia.”
larsson1970

My Avatar? It's Corto Maltese - a pirate but a gentleman! His name stands for honor, honesty, confidence and the truth: THE TRUE FACE OF TSR
BettyNewbie2
Test Subject
THANKS POST
#20

These are gorgeous sims. I came here looking for hair for Bride of Frank for a Halloween theme, and when I saw these it changed my whole plan and story. THANK YOU
jbeyst
Lab Assistant
THANKS POST
#21