by plasticbox Posted 5th Feb 2010 at 12:21 AM - Updated 2nd Sep 2014 at 5:18 PM by plasticbox
47 Comments / replies (Who?) - 16 Feedback Posts, 7 Thanks Posts
This is a new mesh, and means that it's a brand new self contained object that usually does not require a specific Expansion pack (although this is possible depending on the type). It may have Recolours hosted on MTS - check below the description for more information.
This is the little sister of the expensive EA crib. I changed it more than I had originally planned to (partly because I found the EA mesh was not that nice after all, partly due to technical reasons (you know how stubborn little sisters can be)), but it's still sort of “EA matching” in my eyes. I mainly did this because I play top-down and with expensive EA crib, I can never see whether there's a sim in it since the paravent is in the way .. and the cheap one just looks too much like something from a hospital. So, here's a non-frilly, useable, nice one.

I’m extremely late to the post-Pets party, but I’ve fixed this now for Pets and later – post-Pets users, please remove the old version and use the “_rigfixed” one instead. This is confirmed to be working –*thanks to FakeHouses|RealAwesome for testing!

In an attempt to get the stupid wallshadow to work, I fixed/changed a bunch of other things (but not the wallshadow, grr): The indoor wallshadow is still the old one, apparently it's not known how this works. And the mapping of the low-res mesh is now more out of whack than before, due to the remapping – I can't fix this at the moment, but, again, this mesh is only visible in-game while it's still loading, not during gameplay, so I don't consider this a major issue.

If you remove the old crib, you may need to "resetsim" toddlers or babies that were using it.


All of the screenshots below are showing the first version.


Comparison picture (these are the default materials, same on both cribs): 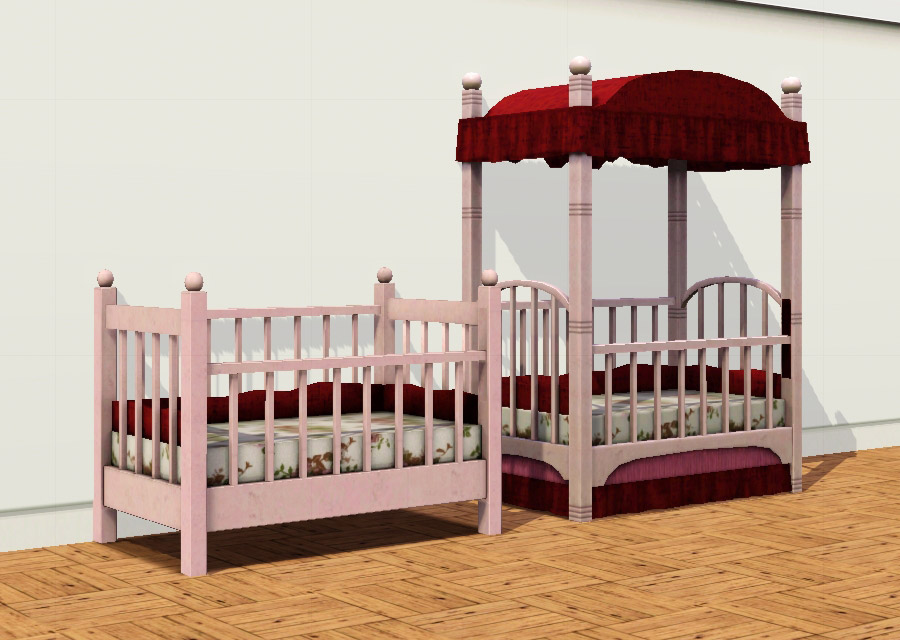 - removed the paravent and dust ruffle
- swapped the curved sides and bottom bits for straight ones
- made the little knobs at the top of the legs smaller, and less pumpkin-shaped
- made those slider bits (where the front part goes up and down) the same colour as the frame, instead of black
- slightly remapped it (argh) and retextured the whole thing (double argh)

My shadow texture is slightly lighter than the EA one – I had it matched but then I thought it just looked too dull. The mapping of the mattress and ruffles around the back and sides is unchanged (which means: a bit stupid, since it's rotated at 90°, but I only noticed that when I had entirely run out of patience).

Presets are the EA ones; it costs 280§ in game and has the same stats and catalogue flags as the original. Four recolourable parts (body, mattress, ruffle, and slates around the side in v2).

- the indoor raytracing shadow is that of the original (see "knownissues" screenshot). I have no idea how to change this – if I find it too annoying on the long run, I'll either reclone it or, if I can figure out how, make it use my mesh instead.
– I'm meanwhile pretty sure this is my game, not the object.
- the low-res mesh probably has mapping issues, but you don't normally see that mesh in game anyway. I can't recompile it at the moment, so I can't change this.

Please note that some screenshots show a slightly older version – the front side does stick out the bottom in the final one (because otherwise, there'd be a gap when it's closed). All of the playtesting screenshots show the final version.


Made in blender with the help of s3pe, s3oc, Aorta, SquishDDS, Photoshop, Milkshape, and S3 Object Mesh Tool.

If you need more info, see:
Back to download view
47 Comments / Replies (Who?) - 37 Feedback Posts, 7 Thanks Posts
Hide Thanks Posts for this thread (Show only feedback)
Page 2 of 2
hatosan

Please make more baby stuff for the sims 3 ! you are the best xx
xecari

Since so many objects have to be updated for Pets, I just wanted to make sure that this is okay to use as is?

Since pets, all of my CC cribs glitch and make the baby invisible, including this one. I really love this crib and am hoping for an update. Otherwise I may try to run one of the fixer programs on it.
absolutelyabby
Test Subject
THANKS POST
#31

I also love this crib so much, but it no longer works with Pets! Perhaps an update?

Since Pets and the Patch, this crib only partially works for me. I can place a toddler in it (haven't tried a baby yet) but I cannot place a teddy bear in the crib, it just goes through the crib, and when the toddler is sleeping, the teddy stays in his inventory.
organizedchaos927
Test Subject
#33

The crib doesn't work for me at all. I can't see it in-game! Can someone help me with this? Or could it be made into a sims3pack file?
slhancox
Test Subject
#34

It says the creator has not been on in some time, so I doubt an update for Pets is forthcoming - which is a shame. I loved this crib, now whenever my sims use it, the infant ends up lying on the floor under the crib. Maybe someone else could update it, with pbox's permission of course.
5th LMNt
Test Subject

Just for info: the infant doesn't disappear... if you change your camera angle, it's just fallen through and is sleeping on the floor (although I'm pretty sure it registers as in the crib for comfort and such).

It would certainly be great if the creator or someone else were to fix the glitch, though.
Cupcake_Cutie

this crib doesn't work anymore. It makes my babies invisible.

Too bad because it's so cute!
fleshapple

I hope someone updates this crib. It is my absolute favorite, especially for triplets.. and now it's unusable. such a pity.. it's amazing.
"IF you cannot love me, teach me. In my language, they are the same with only a difference of inflection." -Diane Ackerman
Yazmynna

I thought my baby was invisible, too! The mom put Ella in the crib, and she just disappeared. I didn't read the comments before I downloaded. I eventually figured out that the baby hadn't disappeared, but was under the bed. I moved Ella out from under the crib with moveobjects on, and made the mom pick her up. However, the mom won't pick her up! She stomps her feet and gets the "I can't walk here!" thought bubble. No matter where I move Ella, nobody can help her. Ella is very lonely and hungry, and now the social worker will probably come take her away! Please fix this problem, and do you have any idea why the parents won't help their baby?
Alice-Hudson
Test Subject
THANKS POST
#39

Finally! I can use an actual crib! I was thinking the same thing you were, about how they seemed too... clinical... And as for the crib with the canopy, it just blocked me from seeing the baby, so now I can have a proper crib! Yay!
melb623

Will you be updating this soon?
YouTube Channel:
https://www.youtube.com/channel/UCw...DG7Kh2PdA/about

You're asking about the Pets issue?

I just did, – confirmed to be working, see post #1 for the new version.

In the kingdom of the blind, do as the Romans do.
FakeHousesRealAwesome

Yes, the updated one does indeed work for Pets. Thanks so much! This was my favorite crib and I've missed it.
My Simblr is FakeHouses|RealAwesome
Check out my Sim re-creations of 1920s kit homes:
The Shadow Lawn ||| The Plaza ||| The Trenton
plasticbox
Pettifogging Legalist!
retired moderator

Thanks for testing! I’ve attached the updated version to the first post now.
Stuff for TS2 · TS3 · TS4 | Please do not PM me with technical questions – we have Create forums for that.

In the kingdom of the blind, do as the Romans do.
FozzerBear
Test Subject
#44

Thanks and question
Hi, thanks for making this. And for making it Pets compatible. (I successfully made a bed for adults compatible myself but other objects sometimes go wrong). This looks like a crib that people would actually buy and use. A crib with a curtain is nice but no-one I know has one(maybe the queen

Question: this one doesn't have the problems the one tile version has? (throwing out babies)
melb623

THIS IS REALLY NICE. I WILL TRY IT... THANKS
applextree
Test Subject
THANKS POST
#48

I love the frills of the original but it's nice to have a "normal" one too, for non-rich sims. Really great, thank you!