191 Comments / replies (Who?) - 6 Feedback Posts, 10 Thanks Posts
This is a new mesh, and means that it's a brand new self contained object that usually does not require a specific Expansion pack (although this is possible depending on the type). It may have Recolours hosted on MTS - check below the description for more information.
This is a featured upload! It showcases the best talent and creativity available on MTS and in the community.

Updated for Pets and patch

Updated for Pets and patch and tested in game. It works and all the slots are there 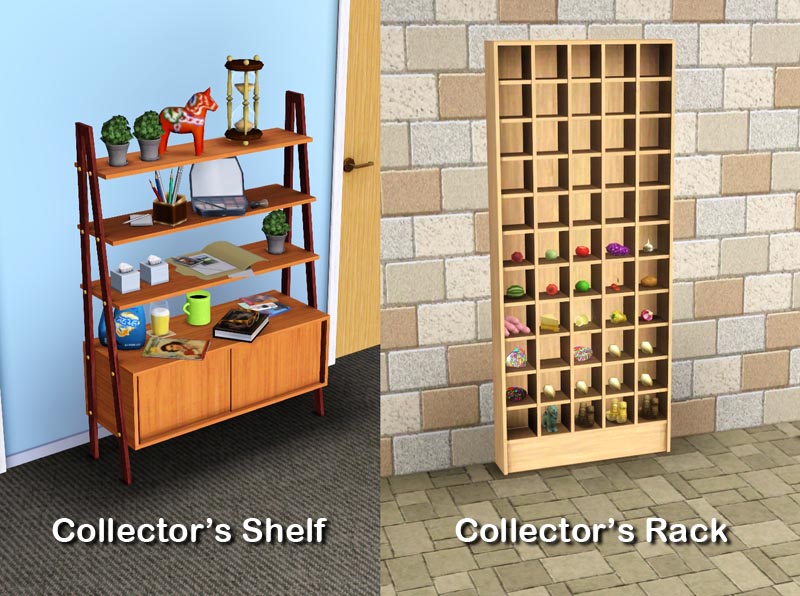 Originally I made this for my sim could hold all the souvenirs, gems and other things as they collect.
Unfortunately, it appeared that gems have a footprint that makes it impossible to place two stones next to each other, with other small items that's fine. But even if you leave a blank space between the stones the shelf can hold 33 gems. In the gaps other small objects can be placed.

Both the shelf and the rack has three color channels and can be found at storage - misc. The same place wwhere you can find the
storage racks for wine.

Additional Credits:
I want to thank EA for the game, the developers of the software I use, the autors of tutorials and all the helpful folks here and there
Tags: #collector, #shelf, #rack, #storage

Thank you for creating this, but it's not showing up in my game!
Behemoth11000
Test Subject
THANKS POST
#179

Hi, I just wanted to say thank you for your mod...
Opheliakc
Test Subject
THANKS POST
#180

Finally something to storage my rocks, gems. I was really tired of buying random tables
Krash1111
Test Subject
THANKS POST
#181

These are hands-down the best display CCs I've run into, and with practically no glitches like a lot of CC cause. Thank you for these!
LoyalNerd
Test Subject
#182

Anyone have any idea why i cant use all the slots on the shelves?
Mesajia
Test Subject
THANKS POST
#183

I just tested in my fully updated game with all expansion packs and the rack works great. Its cool to display small items like most harvested goods. Only some objects, like carrots, are taking to slots. But I guess thats something you can over see :D
sumaiyahaleem
Lab Assistant
THANKS POST
#184

Love This! Thank you so much for this amazing space saver in some of my collecting and crafting households
landerlady12
Instructor
THANKS POST
#186

Love This! Thank you so much for this amazing space saver in some of my collecting and crafting households
lyssamarie
Test Subject
#187

Do you still follow/update this? I've downloaded, extracted, and put the file in my Sims 3 mod folder, but the rack and shelf are not showing up in my game. Any idea why?
celanya
Test Subject
THANKS POST
#188

This message has been deleted by ImSteephill.
Amiaria
Test Subject
#190

This would be fantastic for the Sims 4!!!
SotiCoto
Test Subject
#191

I swear in my Bridgeport game I managed to get gemstones to sit easily in every slot.
Now I'm playing Twinbrook though, the gems absolutely REFUSE to sit next to each other, which looks utterly ridiculous and completely defeats the purpose of the object.
I just want to know how to make them take up every slot without completely screwing up. I know there is some trick to it but I can't remember what it is.


[Edit]: Okay. I'm getting there. I made a copy of my household and tried starting over in Bridgeport. They couldn't put gems next to each other there. So it isn't simply being in Bridgeport that does it. BUT when I put down the new 50x50 lot in the same place my other family have their home and moved my copy family to the new lot, they became able to put gems next to each other.

Test #2: my attempts to recreate the scenario with a 40x40 in my sim's existing town of Twinbrook completely failed. Maybe there is just something special about that particular area in Bridgeport...

Test #4: I thought it might have something to do with town release order, so I started in Sunset Falls, selected an empty lot, tried it out and.... it worked right from the start. Okay. So. Apparently SOME lots are able to do it and some aren't, and I have no idea what makes a lot good or bad for it. Second try in a home in Sunset Falls worked fine too. This is the first place it worked right from the start.

Test #5: Twinbrook just appears to be cursed. It doesn't work at all, no matter which lot I pick. No matter how many times my sim moves home.

Test #6: Appaloosa Plains I confirmed 4 bad lots and 3 good lots. Ran a second test starting in one of the good lots and it still works. I am now pretty confident that particular locations in particular maps are fixed either working or non-working. Adjacent lots on this map seemed to share traits to some extent.

Test #7: Went back to Bridgeport. All the existing houses around my usual spot (right next to the school) are all bad spots (i.e. along the road behind the school). Some of the expensive ones over the bridge are bad spots too, but the "Still Water" home down the end of the road near the bridge works fine (have to evict the existing family). Sugar Cube (middle of the over the river area) and Cliff Cottage work fine too. The Eaves (the lower one), Air Spray, The Crib, Celluloid Heights and Cabin Point are bad, so no go. Oddly enough, Crescent Bay Pied a Terre (one of the flats in tall buildings) also works fine, if you can get past the fact that it is difficult to put anything on the shelves if the area behind them is outside the lot...

Test #8: Dragon Valley seems to be in a similar situation to Bridgeport. Some good, some bad. The ones near the triskelion mark on the ground seem to work, as do the ones on Clover Drive, but anything closer to that circus tent building seems not to work.

Test #9: Midnight Hollow appears to be another cursed town, to my vast disappointment, as it has my favourite aesthetic of any of the towns. No gem storage options anywhere.

Test #10: Starlight Shores is almost completely cursed. I managed to make a custom lot in the southwest corner of the map (next to the coastal road leading out of town) that let me use adjacent gems, but every other place in the entire town failed. Makes me wonder if there are any hidden corners of Midnight Hollow or Twinbrook that aren't cursed.