by Honeywell Posted 8th Nov 2012 at 9:12 PM - Updated 8th Nov 2012 at 9:24 PM by Honeywell
39 Comments / replies (Who?) - 4 Feedback Posts, 11 Thanks Posts
This is a new mesh, and means that it's a brand new self contained object that usually does not require a specific Expansion pack (although this is possible depending on the type). It may have Recolours hosted on MTS - check below the description for more information.
Picked Upload! This is a picked upload! It showcases some of the best talent and creativity available on MTS and in the community. 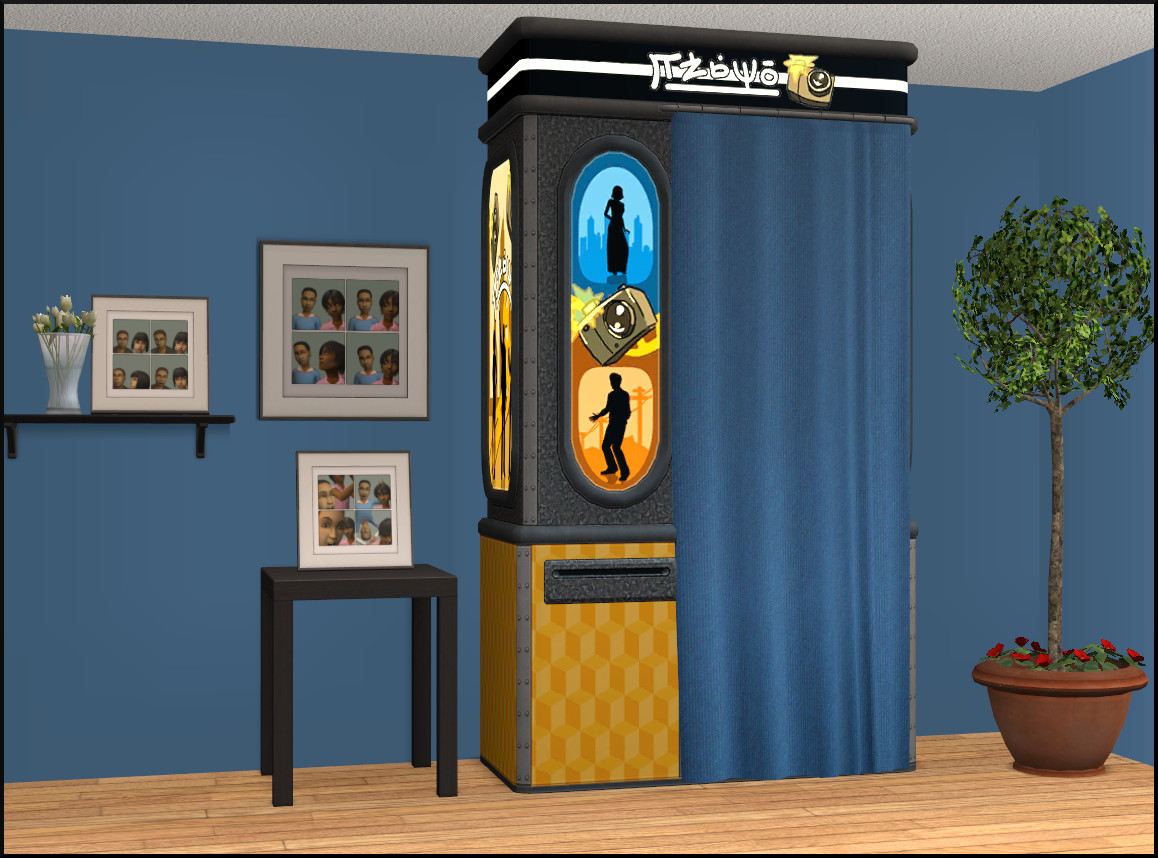 Gigi Photo Booth:
A new, more modern photo booth from the Sims 3 Showtime expansion pack. It also comes with updated picture frames that weren't converted from Sims 3. I included a picture of the Sims 2 photo booth and frames for those of you like me who forget about the photo booth and never use it -- I really like how different these are from each other.

Catalog Description:
Gigi was an early actress so well-liked by cameras and photographers that her name became virtually synonymous with pictures. Now there is a photo booth honoring her memory. Can it help make your Sim famous as well? It couldn't hurt!

The photo booth is available on residential lots too if you just want to buy a booth to snap a few family pictures to decorate with.

Recoloring:
There's two designable/recolorable subsets: the curtain and the outside panels. The interior and the signs can't be recolored, sorry! But if you do want to recolor what you can here's the PSD template I made.


Issues:
The photo booth clips through the ceiling during the woohoo animation. It also looks black in the video, especially on the smallest setting you see here, but since it took over an hour to upload a 30 second clip I'm not going to bother to re-do it with better lighting -- it does not look dark like that in game -- honest.

The half naked sim in the clip (freaking out over the noisy piano that no one is playing) is wearing fanseelamb's tracksuit.

Picture Frames:
The picture frames I used here are available at Leefish.nl as a default replacement for the Maxis photo booth too if anyone is interested. They'll work on your existing photos, you just need to use the hand tool to pick them up and place them again in order for the mesh to update.

Terms of Use:
You're welcome to use this however you'd like. This is also one of those objects that could have been re-created in a variety of ways so if anyone wants to re-do this mesh in a different way feel free. Let me know and I'll even send you the original files if you want them.

Back to download view
39 Comments / Replies (Who?) - 10 Feedback Posts, 28 Thanks Posts
Hide Thanks Posts for this thread (Show only feedback)
Page 2 of 2
LucieSims
Instructor
THANKS POST
#26

stunning idea I like that photobooth ! The sims 3 has plenty of gorgeous objects to have for the sims 2 too !
Cougarwoman40
Test Subject
THANKS POST
#27

I don't even have my TS2 disk anymore but this is really awesome! I like it better than the sims 3 version actually!! ^.^ I like how it shows sims and pictures right on the booth. Looks really good, great conversion job!
josephineporta
Test Subject
#29

I'm having a little problem with this. When my Sims entered it it just disappeared! I couldn't take a photo because I couldn't click on it. They were just sitting in the air. I couldn't remove it either, but it's still there because I can't place anything else there if I'm not using the moveobjects cheat. I didn't try it on community lot, though, so could it be that it only does that when placed on residential lots?
Honeywell

Quote:
You're the first person who's had a problem with this that I know of but I tested the photo booth exclusively on residential lots without issue so I'm going to say that it has nothing to do with whether it's a residential or commercial lot at all. If you want to go through the hassle of troubleshooting (Does it happen all the time? On other lots? With different people? Have you tried it without any other CC installed? etc.) I'll be happy to work with you to try and figure out what the problem is. Otherwise, the only thing I can suggest is for you to remove it from your downloads folder if that seems like more trouble than it's worth.

Either or, thanks for posting. If anyone else reports a problem with the photo booth it's useful to know they're not the only one.

You make like the awesomest stuff ever! <3
I know me and my Sims are totally going to enjoy this!
josephineporta
Test Subject
#33

I know it's been a while but I just started playing the Sims again and remembered this problem. Just wanted to let you know that I no longer have this problem - I put the booth on a few residential lots and tested it and it worked perfectly fine.

I still don't know what the problem with the first lot was, though. I realized I managed to move it from there (although it disappeared) but I don't remember how since it was more than six months ago.
alisonk1185
Test Subject
THANKS POST
#34

Which area would I find this in, when I want to buy it.
Honeywell

Quote:
The same as the Maxis photobooth.

I'm not sure where that is, is it the general tab or entertainment.
Bismaazam
Test Subject
THANKS POST
#37

GUYS!!I know this is going to sound absolutely ridiculous but HOW CAN YOU DOWNLOAD IT!? I'm SOOOoooOO00 confused!And livid, of course. I need help!It'll be appreciated x

I had an early Christmas today because I downloaded everything! Thank you so much
Rusty55
Top Secret Researcher
THANKS POST
#40