This is a mod designed with the Aurora Skies world in mind but doesn't require it.
Aurora skies has a Scandinavian theme and many of the Sims the world starts with have Scandinavian style names, so I thought it would be good for new sims to have names used in Scandinavia as well.

Most of the names are names that are common in Norway but there are a few names thrown in from Sweden, Denmark, Iceland and Finland. (Main source: Statistics Norway)

This won't change the names of any of the existing sims in your game but it will give new sims Scandinavian style names. 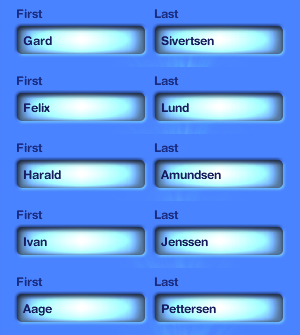 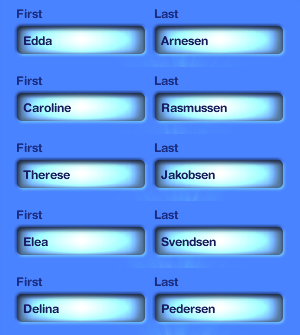 How to Install
Simply put the package file into your Packages folder. To uninstall, just delete the package.
Please keep in mind that sims created with this mod running will keep their Scandinavian names after you have uninstalled the mod.

See: Game Help:TS3 CC Basicswiki for a full guide!
Back to download view
18 Comments / Replies (Who?) - 9 Feedback Posts, 6 Thanks Posts
Hide Thanks Posts for this thread (Show only feedback)
Miss Discordia
Lab Assistant
THANKS POST

I was working on such a mod... Well, now I don't have to :D
alayaya
Lab Assistant
THANKS POST

Awesome!! Where were you when I was playing in Aurora skies?! I hated how new sims were being given names that made absolutely no sense for the community...
flammen

Hm, neither Felix, Ivan, Caroline, Therese, Elea nor Delina are Nordic names. Felix is Latin, Ivan Slavic, Caroline French, Therese is derived from Spanish/Portuguese Teresa, which is derived from Greek, Elea is English, derived from French and Delina is either the female form of the Albanian name Delin, or an example of the creativity in disguising the heritage of the French name Adèle by the English.

You might want to use a source like this, this, this, this and this. Those names, that are also used in every other language, usually tend to be of Hebrew/Latin/Greek origin.
rusty1411
Test Subject
DELETED POST
24th Aug 2014 at 1:00 AM

This message has been deleted by rusty1411.
CountVlad
Test Subject

Quote:
Thanks for the feedback. Most of the names are Nordic in origin, but the mod isn't necessarily intended to only contain names that are Nordic in origin, it's just to give a better impression of your sims being somewhere Scandinavian. I'll update the mod description to better reflect that (the description may be a bit misleading).
Originally I started by using Behind the Name but I found it a bit too time consuming. It's great for finding individual names using the generator but they really need to make a generator that will produce a list. Most of the names come from lists found on Statistics Norway.
Saara214
Test Subject
THANKS POST
#6

I'm sorry but there's no names from Finland and it made me sad and i have a Finnish name and it's Saara and it's just not there....
malfoya

I am from Norway and I know several people called Felix, Therese and especially Caroline (that is used a lot)! Most people write it "Karoline", but there's many people who chose the more international form. Just like "Kristoffer = Christoffer", "Christian=Kristian" etc.

Alexander is not a Nordic name either, yet almost every person knows about 5-10 of them up here

Personally I think the mod is ok with common names USED in Scandinavia, and they do not necessarily have to have their origin here.
A sim blog
rusty1411
Test Subject
#8

If I already have a name Mod will they work together or will this cancel the other one out?
CountVlad
Test Subject

Quote:
I think only one will work.
Edorenel
Field Researcher
THANKS POST
#10

Oh-ho! I was waiting for this for a long time. :3 Yay~ Thank you for this!
evemas
Test Subject
THANKS POST
#11

Take it from a swede, Felix is an incredibly common name in Sweden, not depending on whether it originally is Latin or not. I mean it's not like we're all named Björn and Erik here, right? And a bunch of names that has to do with Christianity came to us in like the 12th century and then it stayed with us here, Maria for example is one of the most common names in Sweden.
But if you want names that derives from Norse mythology then Freja, the male counter part Frej, Vidar, Ulf, Tova, and the classical Sven are some tips.

Oh, I checked that Swedish source of yours, there are like ten names in that list that are common names for people under the age of 30 in Sweden. Also nobody is named Kay here, seriously, that name doesn't belong in that list at all.
Guest
THANKS POST
#13

Thanks, this is great!
Doggieskylover
Test Subject
#14

All the last names or Norwegian and Danish, no Swedish, Finnish or Icelandic. So I wouldn't exactly call it Nordic names. More like Danish and Norwegian.
justinpatrick1011

What about Dovahkiin?
"We are nothing but a planetary dust."
Morphar
Scholar

We don't have dragons in the nordic countrys only trolls so no Dovahkiin.
Melly00
Test Subject
DELETED POST
2nd Aug 2015 at 12:07 PM

This message has been deleted by Melly00.
doctorek7
Test Subject
#17

The game does not start with this mod. Does anyone know how to fix it?