by mustluvcatz Posted 23rd Sep 2014 at 3:56 PM - Updated 23rd Sep 2014 at 9:46 PM by mustluvcatz
21 Comments / replies (Who?) - 4 Feedback Posts, 16 Thanks Posts
First and foremost: this is not meant to be a celebrity sim/real person. He did start out that way but I decided to make Robert a regular guy who bears more than a passing resemblance to a man I "grew up with", admired and always wished I could have met: Robin Williams. The world lost a great person when he passed away and this sim is my little tribute to him. Now: on to.. on to the rest of it, lol:

Meet Robert Williamson - Willow Creek's very own, prize winning celebrity impersonator. Which celebrity? Well now. If you can't guess, then maybe some of those prizes Robert won should be taken back?!? Okokok, we'll tell you: Robin Williams. (Now that you know, don't you feel silly for not seeing the resemblance?) 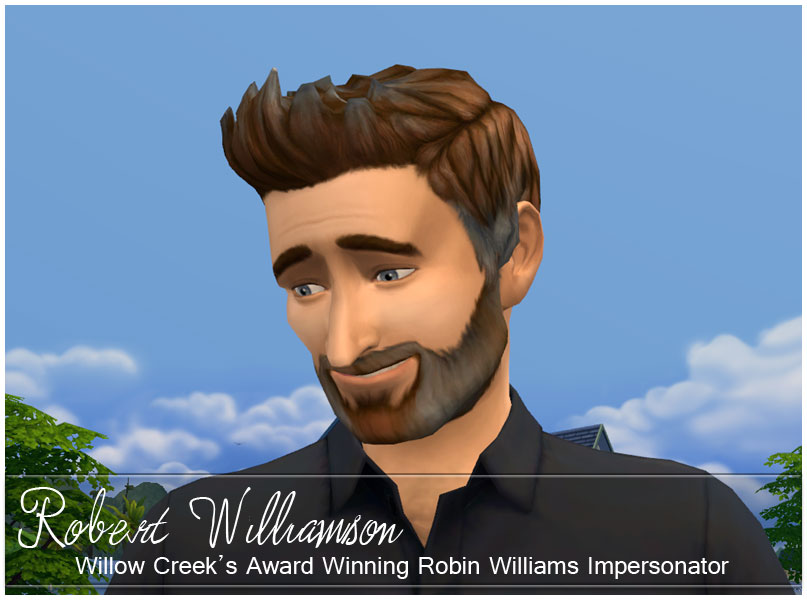 Robert has heard "Omg! Are you Robin Williams?!? You are, aren't you?!? Please tell me you are!" for most of his life. Robert grew up watching Mr. Williams on TV and in the movies and admired the man for who he was and he always hated breaking the ladies hearts by having to tell him that he was not Robin Williams. Shortly after moving to Willow Creek, he was watching the news and saw that Robin Williams had passed away. That's when Robert, who has always had a goofy side and loves to tell jokes, decided that the best way to honor the man he had admired for so long was to try to carry on in a zany, Robin Williams "Mork From Ork" kind of way. So he set out to improve his comedy skills. 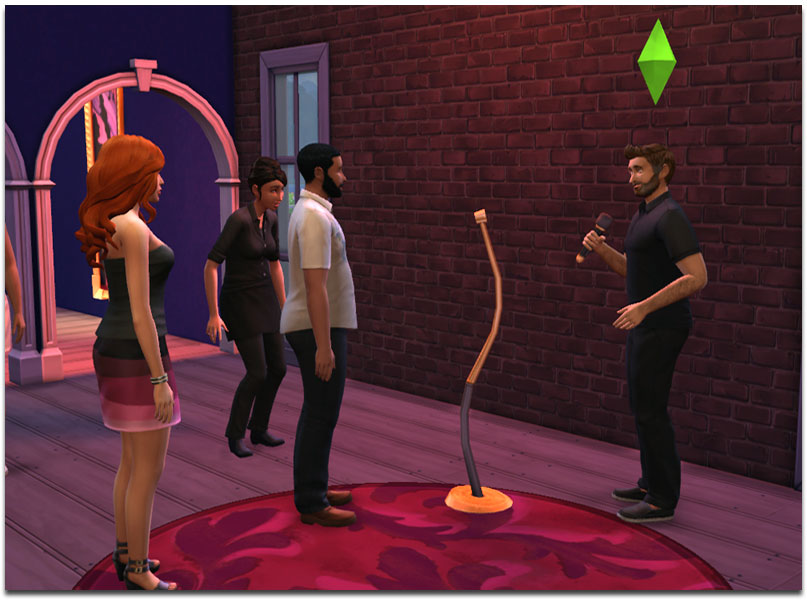 It was during one of his nightclub performances that he was noticed by the organizer of the local "Look-A-Like" contest. The next day she approached him and asked him if he'd like to compete. He said he would and history was made. 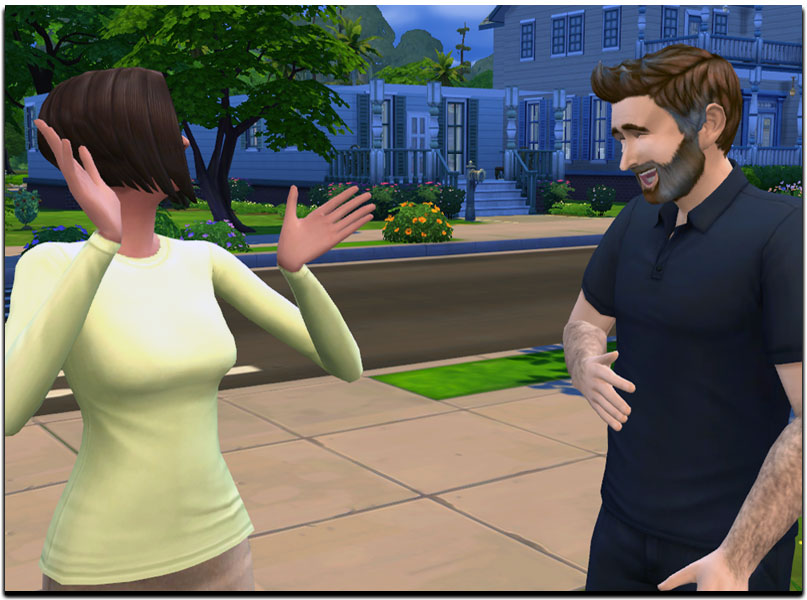 To date Robert has won 5 "Look-A-Like" contests and is a Willow Creek favorite every where he goes. (See his prizes? They may be ribbons, but they're still prizes!) 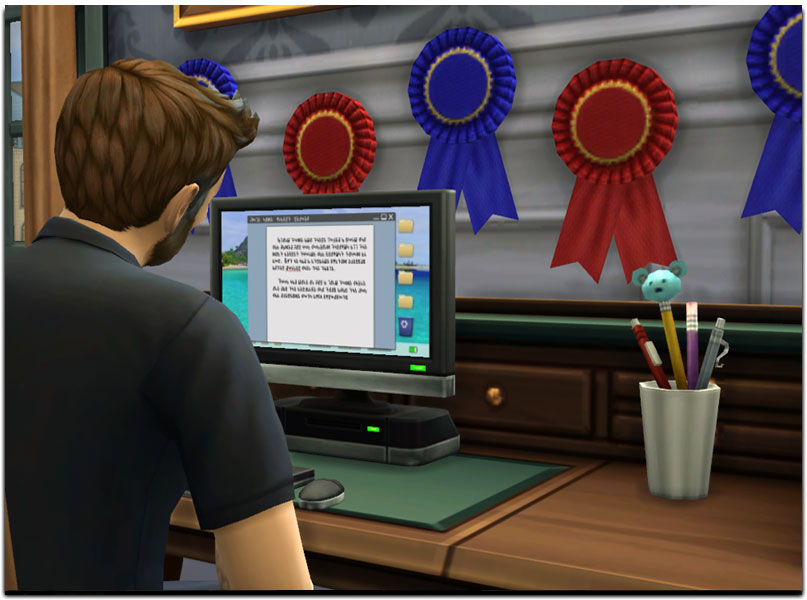 Robert comes as an adult sim. He's a family man who'd like to have a big family - he was married once before but they sadly didn't have any children. He's active, creative and a bit goofy. I dressed him up in outfits for all categories, but I'm sure he'd appreciate a clothing makeover.. a fashionista I am not!

Back to download view
21 Comments / Replies (Who?) - 3 Feedback Posts, 16 Thanks Posts
Hide Thanks Posts for this thread (Show only feedback)
CatherineTCJD
Mad Poster
THANKS POST

This Sim brings a slightly sad smile to my face. Good job.
mustluvcatz

Catherine - Thanks! He's a real charmer in my game.. but votes never hurt, lol.

And do you mean you miss Robin? Me too.. I went through a little "must watch his movies" phase recently. What a way to laugh and be sad at the same time.

Guimb - nah, far from the best.. but thank you anyway.

centerman - Me too, which is why I couldn't bring myself to make him an actual Robin sim. It felt disrespectful to me in a way. (Although I think he would've approved.) He's fun to watch in game- he really does act a lot like Robin. It's kind of eerie but awesome.

Thank you.
Buy Me a Coffee? * tumblr
tchang
Test Subject
THANKS POST
#7

We've lost a lot of stars lately but Robin's the only one that's really affected me.
mummy_001
Scholar
THANKS POST

He is awesome. I'm going to move him into the house that I have Kim Kardashian and Taylor Swift living in.... Hopefully those two will die from laughing.

Rest in Peace Robin Williams for you always made me laugh....
AshleyJane
Test Subject
DELETED POST
24th Sep 2014 at 5:30 PM

This message has been deleted by AshleyJane.
RomerJon17
Scholar
THANKS POST

This is so sweet.... Thank you so much for re-creating him on The Sims 4...
boohgirl
Test Subject
THANKS POST
#11

That's awesome. One of my favs too. Such a loss. Thanks for the wonderful likeness. He can live on in our games as he will in our hearts.
Aemae
Test Subject
THANKS POST
#12

Wow, really wonderful likeness. I still can't watch his movies tho, makes me so incredibly sad still. I grew up with him- he was my childhood hero. Thank you for this tribute!
Bocaan
Test Subject
THANKS POST
#13

this is the most sim like robin williams i have ever seen made for the sims 4 even if he is an impersonator lol but damn i hated that robin died i always hoped that the likes of justine beiber or those trashheads that are on the radio trying to sing would pop there clogs not a great guy like robin but still we all must fall when it is our time but robin did his time with style! and the kind the people ive mentioned i feel should pop off the earth can only dream of and if they tried to wish for would literally be a wish too far! oh oh oh thanks for making robin immortal

ahahahaaaa you did his name a great honour

centerman - Me too, which is why I couldn't bring myself to make him an actual Robin sim. It felt disrespectful to me in a way. (Although I think he would've approved.) He's fun to watch in game- he really does act a lot like Robin. It's kind of eerie but awesome. Thank you. (Maybe Robin's Soul has returned to us in Sim form!)(no disrespect to him ment)
Tyggz
Test Subject
THANKS POST
#15

Best way to remember him
Zahkriisos
Test Subject
THANKS POST

Thanks! I too feel very saddened at the loss of one of the greatest comedians this world has seen.
simlishchic
Forum Resident
THANKS POST

beautiful job, and a sweet tribute! He has a twinkle in his eye. RIP, Robin, you are sorely missed.
billielith
Top Secret Researcher
THANKS POST

Beautiful!
I don't play Sims 4 yet, but this sim (and your post) is amazing!
Ekko
Test Subject
THANKS POST
#20

The likeness is striking, and your choice to call him an impersonator is a great idea !
I too feel I've grown up with him, his passing was heartbreaking. I don't know if I will bring 'Robert' on board, but it kinda lift my heart knowing he's around, somewhere !

Thanks for the additional comments and compliments guys.

Sorry I haven't replied to any of them - I somehow missed it all.

Now that I've reread the entire post I'm sad again. And I think I need to see if any of his movies are available on Netflix or online somewhere. Jack would be an awesome choice right now.