Myau is now also available without the wings! (Look at the last picture if necessary - same cat, no wings)

How are you today?
Are you also a gamer? Do you play other videogames? Have you ever played the old-school 2D videogames? Maybe you still play some of them?

Today I got a character from a game that's been important in videogame history. Maybe the Sims wouldn't exist without this game, as RPGs have been an important step out of the traditional arcade/platform videogames.

I am talking about the Sega Master System rpg PHANTASY STAR, released the 20th of December 1987 in Japan, and in 1988 in the United States. I was eight years old!

I played it on my Sega Master. And it took me MANY YEARS to finish the game. I was *stuck*, and there was no GameFAQs back then.

Phantasy Star was one of the first illustrated/animated RPGs in videogame history. I had read somewhere that it got released before Dragon Warrior and Final Fantasy, but exxor9108 brought me the information that in Japan, Final Fantasy got released two days before. 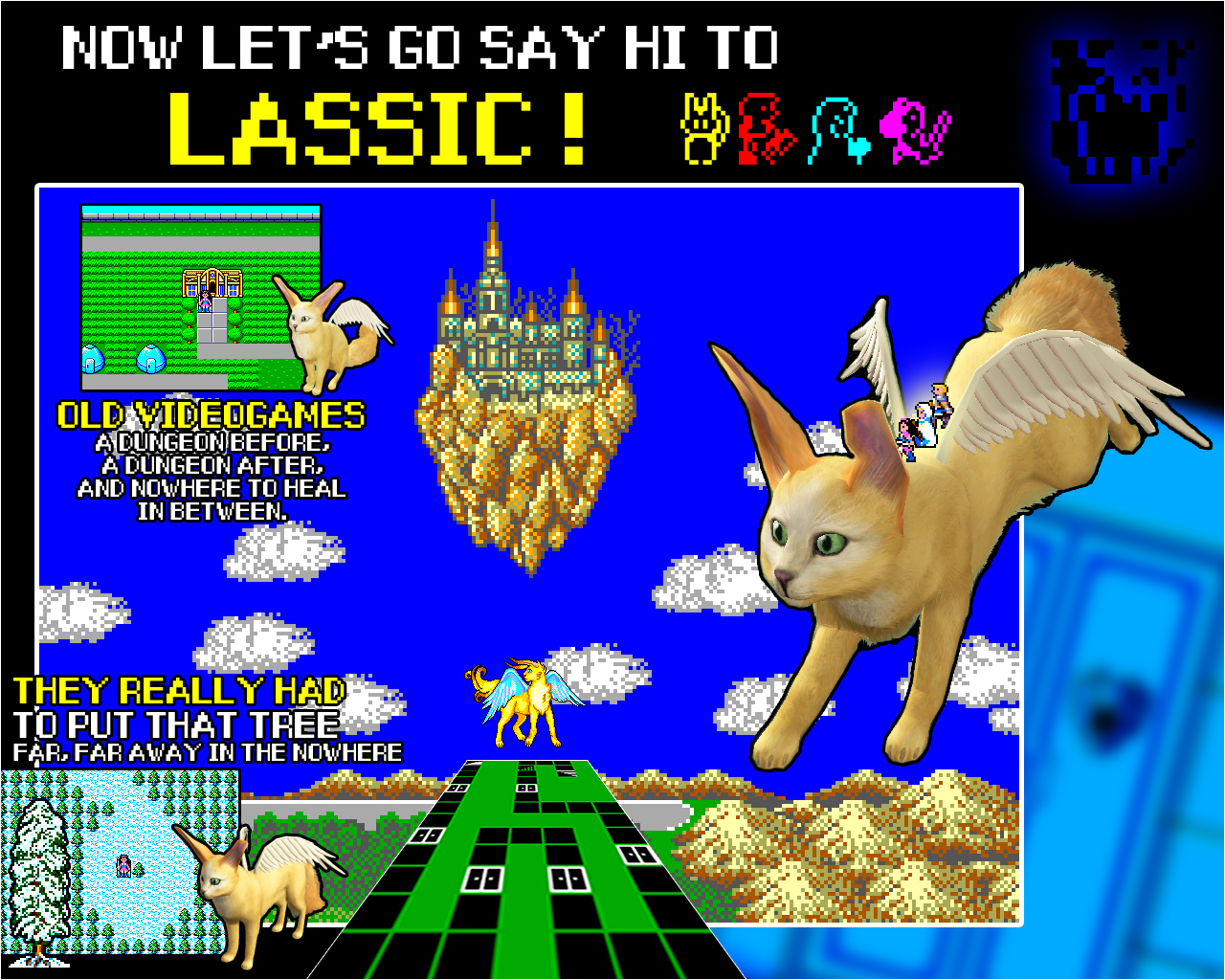 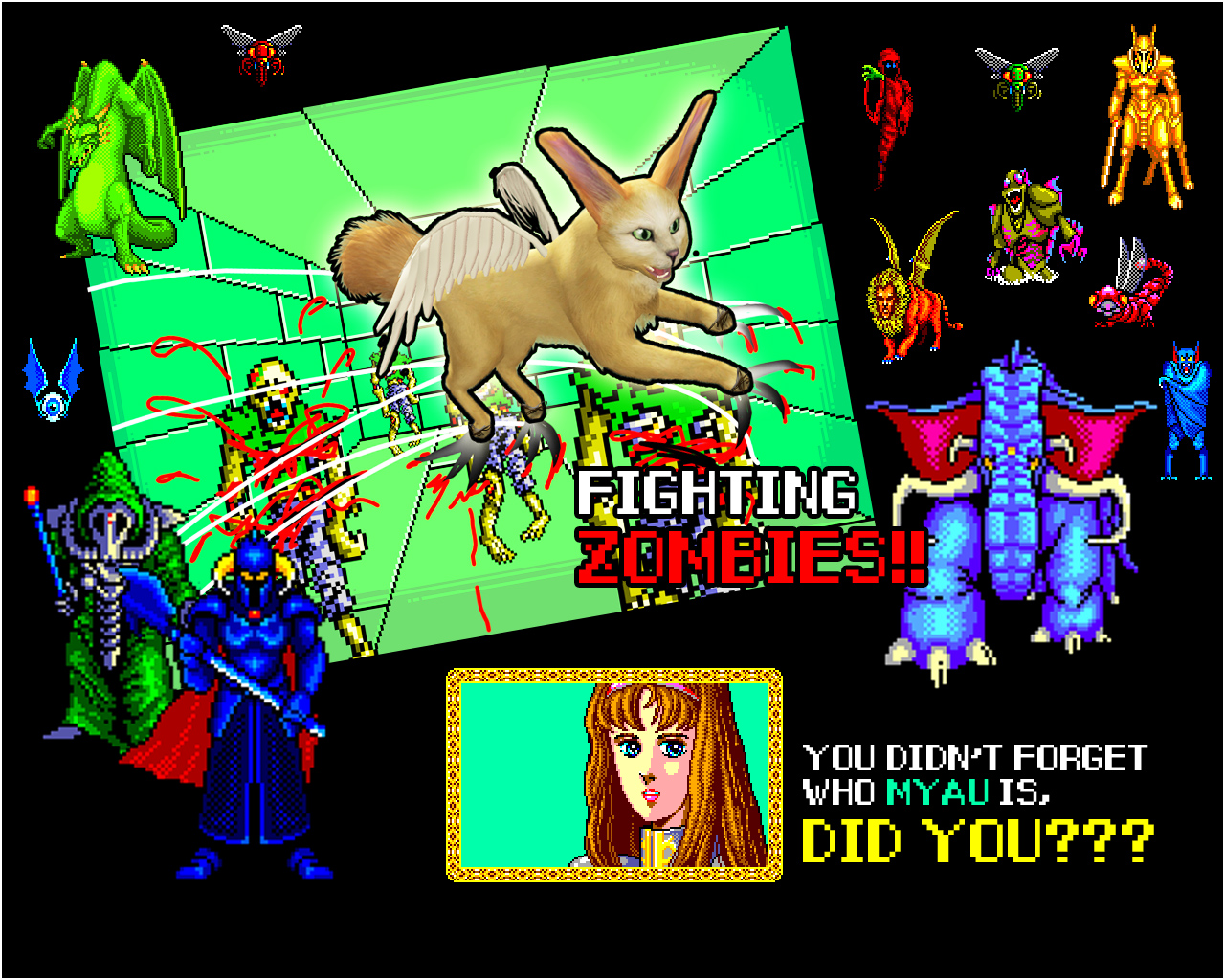 I used to have a website about Phantasy Star 1988 on Geocities, forever ago, and I still have all the nuts and bolts from it, so I joined a couple gif animations to the post in a separate zip (similar to the ones displayed in the pictures). There's a few of them, they're kind of useless but fun to watch, the little Myau running is particularly cute. And they can be used as smileys in your conversations.

The other guys in GIF pictures are the Sorcerer and Magician, monsters from the game. If you played the game, you probably remember especially the green bastard. :P

Have a good day! Have fun with the pet!
Enjoy!


Everything on the pet is Maxis except of course the Wings, made by Klinny on MTS. If the wings are not in the box with Myau (they should be), you can get the wings here.

Back to download view
13 Comments / Replies (Who?) - 6 Feedback Posts, 6 Thanks Posts
Hide Thanks Posts for this thread (Show only feedback)
AlfredAskew
Field Researcher
THANKS POST

This is just generally a fabulous post. Thanks for that! xD
billielith

This is so dang cute! Don't know why I have to have this, but I do! :D
Love your presentation, too!
Guiraupp
Test Subject
THANKS POST
#6

Kinda wanted to say that Final Fantasy was the first mainstream RPG in video game history, as it was released in Japan in 1987. If you wanted to get technical, then Phantasy Star was the US's first ever mainstream RPG.
billielith

Quote:
I just verified and you're right! Final Fantasy got released two days before Phantasy Star in Japan. Wow, I'll have to edit my post. Thanks for the heads up! :D
I know I can't do it, but I'm still going to do it. - M. C. Escher
Creampuff12
Test Subject
THANKS POST
#11

xD This is amazing.
billielith

How'd you get the tail like that? Please answer. (Even though this was posted long before this reply)
billielith

I love that "Please answer.", lol. I always answer.

I used the sliders, saved the pet (by saving a copy of the breed to my computer). Then I worked again on the same pet. I did that both for the ears and tail, rinse, repeat, until I got to the size I wanted. The sliders get reset to zero when you save a pet or sim (in Bodyshop for sims), and you can push things further then.

If you need more information, you can check here.

Get Alis, Odin and Noah from Phantasy Star 1988 here
Get a perfect career for Myau here