Your Party, Your Way Buffet Tables

by heaven Posted 12th Apr 2015 at 11:00 PM - Updated 12th Apr 2015 at 11:26 PM by heaven
47 Comments / replies (Who?) - 7 Feedback Posts, 15 Thanks Posts
I don't know about y'all but my sims are pretty darn tired of autumn salad, stuffed turkey, and cookies at those buffet tables. And though I might not have kids yet, I know enough about them to know serving that kind of food at a kid's birthday party might lead to the holy grail of meltdown temper tantrums. 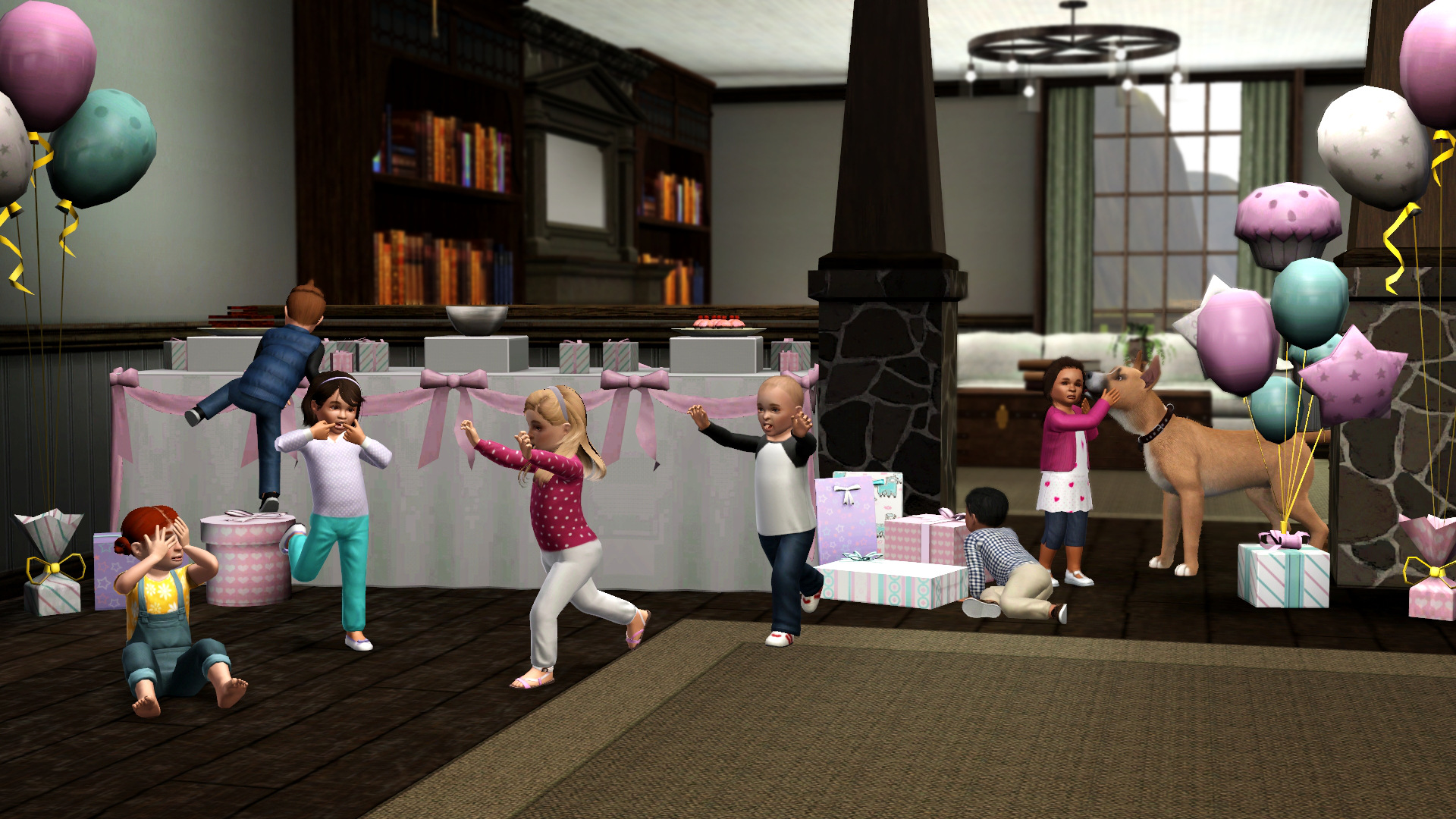 Behind the Scenes
Icarus_allsorts has a fabulous Resort Buffet Table mod that allows players to choose the meals served within the resort and also use on community lots. But what about parties on home lots? Or themed parties? Turns out, IngeJones has a pay buffet mod for players wanting to run a home business. With her permission, I poked at her mod and got it working with the store buffet tables as well.

While I was at it, I also played with the channels to make the best use of them and, in some cases, get a bit more functionality out of the tables. 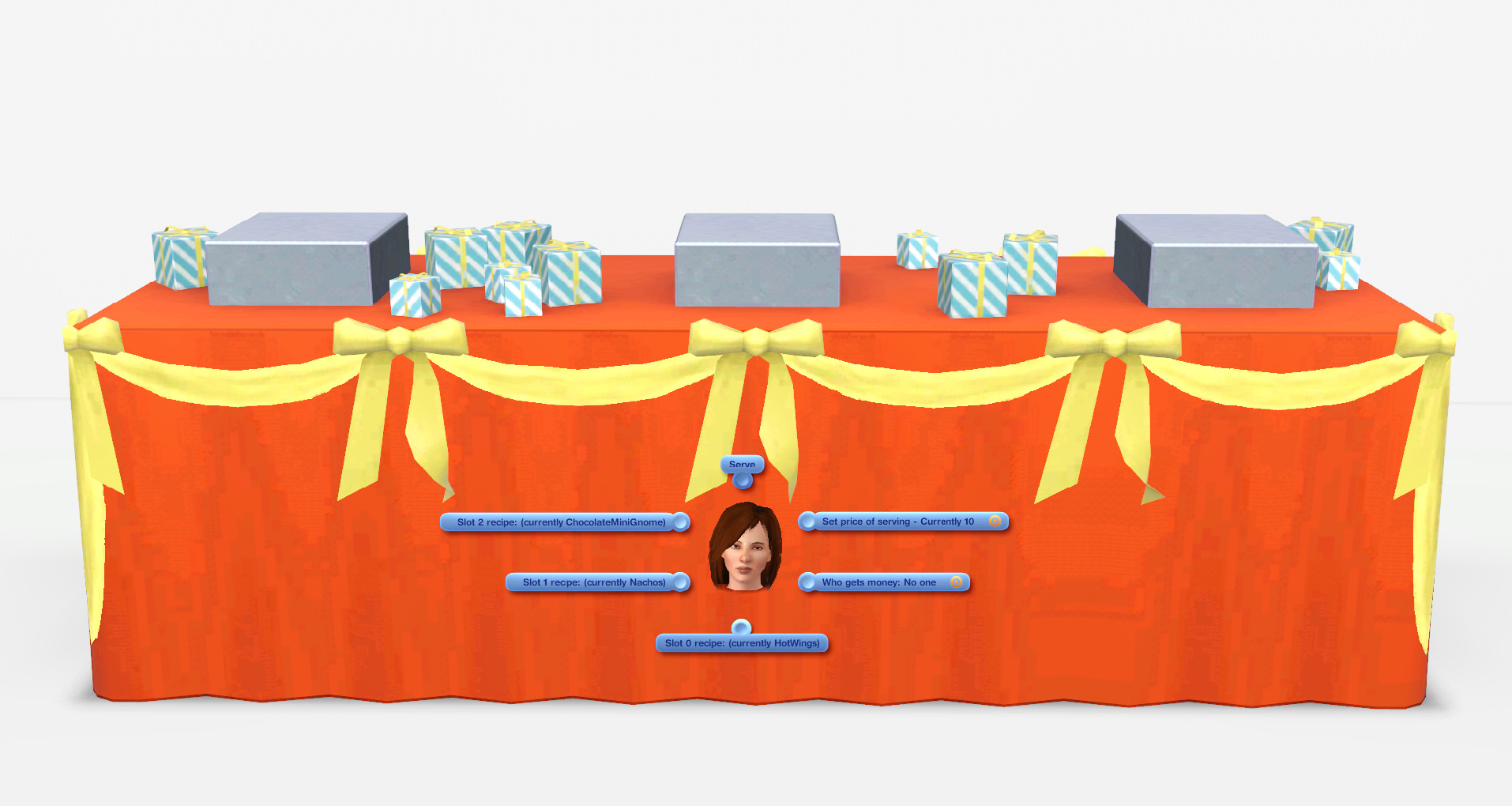 But what does it do?
This mod brings up an extended pie menu for the buffet tables. When you click on the table, instead of only getting an option to "Serve", players can now choose which meal will be served in each slot. Players can also choose to charge sims for the food.

Meal Selection:Payment:*Store premium content that adds recipes: Sizzle Baby Pro Deep Fryer, Chun Co. Teppanyaki Grill, Wood Fire Oven, and the Baker's Station.
**Due to the way EA coded the recipes, the meals from the Baker's Station show up under Vegetarian or Meat, rather than desserts. I assume they had some reason for doing it this way, other than just being EA. Basically, if you want to serve apple cobbler, don't expect to find it under the desserts!

Channel Information:
Velocitygrass's mod was a great help to me before I undertook this project. However, it could only go so far in making these items as versatile as they could be. It can still be useful, particularly for the winter buffet (see below in the channel breakdown) so I would definitely recommend it. However, I still wanted to adjust the masks to make better use of the channels. To me, the most exciting one I worked on is the Holiday Winter buffet table. Before, it had only 2 presets: both came with predesigned tablecloth, garland, and presents. I saw greater potential for it though so, with some adjustments and the help of TextureTweaker, it can now be used in all manner of gift giving parties: Christmas, birthdays, baby showers, etc.

*Due to the way EA mapped things, there are some stretched sections on the vase that I couldn't fix. It's not very noticeable since the tiling is small unless you zoom very close in.
**Preset 2 and Preset 3 are only different because on the 3rd I got rid of the dog kibble in the bowls. I don't know what it was supposed to be but I didn't like it.

*If you have my previous buffet table, this one is better, both in channels and because of the added script.

*Using velocitygrass's mod, you can get an additional 2 designs from Presets 2&4: use the cheat to remove only the stencil and you will have a fully recolorable tablecloth and presents but still have the garland overlay intact.


Mod Notes
There are 2 sets of downloads:
Additional Credits:
IngeJones, most importantly, for making the original buffet script and giving me permission to work with it.
Buckley, for doing additional testing for me.
Tools: S3OC, S3PE, TT3, Gimp
Tags: #buffet, #buffet table, #food, #party, #parties

Built with Game Version: 1.63
Key: - File was updated after upload was posted
Need help with downloading or installing content? Click this link!
Don't forget to Thank the creator after downloading! Use the Thanks button located above the screenshots above.
Basic Download and Install Instructions:

See: Game Help:TS3 CC Basicswiki for a full guide!
Back to download view
47 Comments / Replies (Who?) - 10 Feedback Posts, 35 Thanks Posts
Hide Thanks Posts for this thread (Show only feedback)
Page 2 of 2
GabbyCakes
Test Subject
THANKS POST
#26

I've wanted something like this for the longest! Thank you so much! :D
jaydan.pein
Test Subject
#27

Why do I get only black circles in buy mode

Quote:
Black circles where? I'm honestly not sure as that's not an issue I ran into in any of my testing. Can you take a picture of it?
Heaven Sims | Avendale Legacy
"On the internet, you can be anything you want. It's strange that so many people choose to be stupid."

Thanks so much. This helps make a party more interesting. Will be trying it out asap.
VMScofield
Lab Assistant
THANKS POST
#30

Much better! Thank you.

You can never go wrong with cookies, but who serves turkey and salad at a kid's party?
janyses
Lab Assistant
#31

The modded tables appear as little "jig" balls in Buy mode, next to the EA tables which still have the original interactions (Serve>$250.) They still appear as little balls when placed. Basically, the defaults are not being replaced.
ETA: I guess I should have used Print Screen instead of the in-game camera. Was trying to show how they look in Buy Mode.

@jaydan.pein, maybe you need to decrap the replacements if your original tables are decrapped also?
heaven

I tested these in both my regular gameplay user files as well as a set of vanilla user files. I had no issues with either version. I did not test how they would react with decrapped content as mine is not decrapped. If your original files are not installed through the launcher directly from the store and you're having issues, unfortunately I can't help you. Except to suggest deleting those and using the non-default replacements instead.
Heaven Sims | Avendale Legacy
"On the internet, you can be anything you want. It's strange that so many people choose to be stupid."

This message has been deleted by janyses. Reason: Figured it Out
simdebster

Delphy's Dashboard shows conflicts between your stand alone tables. It is probably just because of redundant code in each and if it is all the same code then there is probably no problem, but I just wanted to bring this to your attention.
Have a bright platinum diamond day!
Deb
Frogsnack
Field Researcher
THANKS POST

REALLY! Thank you so very much for this one!
OblivionIsNormal
Test Subject
THANKS POST
#35

If you ever update, an option to "call to meal" would be a great added bonus. Great mod!
cat52572
Test Subject
THANKS POST
#37

Love the buffet tables for Halloween, wanted something like this and so glad I finally found it!!
nyotakaa
Test Subject
THANKS POST
#38

THIS IS AWESOME THANKS...
Bre814
Test Subject
THANKS POST
#39

Anything with food is a winner in my book (even if it's virtual). Thanks!
RoseOakMoon
Test Subject
THANKS POST
#40

I can't believe it took me so long to find this because my gods, the number of times I've thought "I wish I could just recolor that part and it would fit here so much better". Thanks for this. You did an amazing job!
vannared
Test Subject
THANKS POST
#41

awesome and you party pics are just wonderful!!

Wow, this is great! Thanks!
murfee
Mad Poster
THANKS POST
#43

I have tried so many times and I cannot get this one to work. I've tried putting the mod in packages and overrides, I've tried deleting it and redownloading it, but it's never recognized as existing in my game! Does it not work anymore?

Edit: I'm a dork. I must have missed them when extracting other mods. The base game buffet table, the Christmas/Hanukkah one, and the Halloween one all work as intended, however the wedding one just shows up as a gray circle in buy mode, like the fog emitters in buydebug. Any idea why?
Blackroses212
Test Subject
THANKS POST
#47