English Names For Everyone 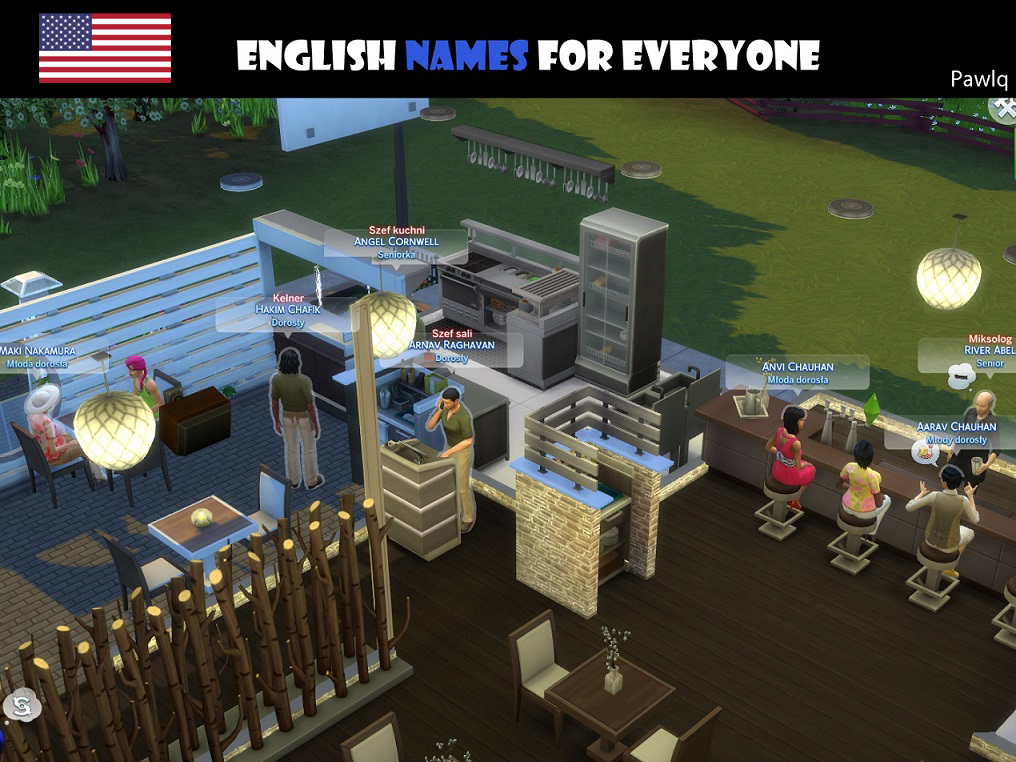 I did it for a long time and finally i finish it! ENGLISH (American) name for everyone - no matter what language version of the game you have

For now all Spawn Sims and randomize in CAS takes names from from the pool of ENGLISH language names.
Mod change base names from your language version (e.g. Polish) into ENGLISH version. No more stupid names (e.g in the Polish version in which I play) !

Mod is for everyone whos have non-english version of game but they want have Sims with English names. If you have English game - you no need to download
Special names (like alien or San Myshuno and Selvadorada residents) still will be... "different" because they must be different

. If you expect that this mod change "Japanese" or "Latino" names in yours ENGLISH version of game - I'm sorry, but it will not happen

Compatible with pets and residents of Selvadorada

Mod does not replace the names already used in the game

Built with Game Version: 1.40.61.10
Key: - File was updated after upload was posted
Need help with downloading or installing content? Click this link!
Don't forget to Thank the creator after downloading! Use the Thanks button located above the screenshots above.
Basic Download and Install Instructions:

Need more information?
Back to download view
40 Comments / Replies (Who?) - 18 Feedback Posts, 18 Thanks Posts
Hide Thanks Posts for this thread (Show only feedback)
Page 2 of 2
Diffevair

I have been looking for something like this! Thank you so much for sharing!
Compuzak
Test Subject
#28

Can I use this?
Do you know if this will work for the English version of the game so it will stop giving me all Asian names? I haven't seen an English/American name since the day I installed the darn game.
Compuzak
Test Subject
THANKS POST
#29

Answering my own question, in case someone else wants to know... It does work!! Finally, American/English names ! THANK YOU !
nova2017
Test Subject
#30

Thank you! I was wondering the same thing because my US game is full of names that are not American/English... will be putting this in my game!
Diffevair

Awesome! And thanks for the heads up! Headding right over to your page

Needs an update for "Get Famous" the names in Get Famous are ridiculous.
matsuba
Test Subject
#35

I'm gonna skip commenting on the obvious racism and point out that a lot of the names shown aren't american or even english at all. Just in your preview you have Salinas, Gomes, Iliana and Selena; all spanish names. You also have some french and german names there. Just thought you'd like to know in case you weren't aware you were being accidentally inclusive.
cinthila

Well Matsuba, you might be happy to learn that actually the US was built on immigration from pretty much every country in the world so I'm not sure what is American and what isn't... Many German, French, Spanish names are part of the American legacy because it's part of its history as well. If we go by your standards then NOTHING is American... Because as I said, being American is having latino or European or Caribbean or African origins (ancestors), and many more that I can't be asked to mention.
I just had to reply to your comment 'cause I thought it was pretty uneducated of you to say something like that. I don't know what you think is "racist" about the mod, I actually felt like your comment was the racist one as it pretty much says it's either "American/English" OR French, German, Spanish, etc. as if nowadays it can't be integrated to the culture.
In my opinion, what is meant here by "English names for Everyone" is no more foreign names that aren't part of the English speaking world or culture. So it makes sense to find in there names that maybe aren't originally "English" (whatever that means) but have become part of the culture. For example, I know quite a number of Selenas who aren't related to the latino or Spanish culture whatsoever...
parkjoonho
Field Researcher
DELETED POST
28th Feb 2019 at 8:11 AM

This message has been deleted by parkjoonho. Reason: duplicated post
parkjoonho

hi, this mod is outdated with the latest game patch.
i went ur tumblr, still the same one with this. hope u can update this.
KyaraRose
Lab Assistant
#38

I hope so too
jessim
Test Subject
#39

Do either of you know where I find a NON-INCLUSIVE mod like this? Or do I have to keep murdering the Sims that spawn with foreign names?

I hope you will be able to update this mod