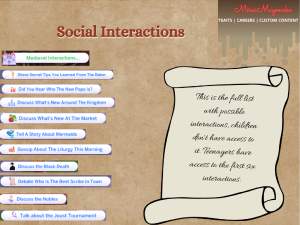 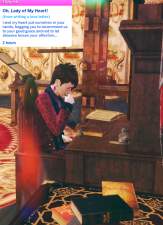 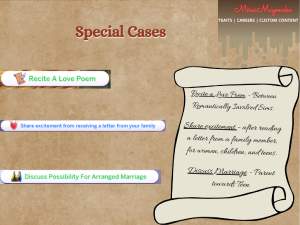 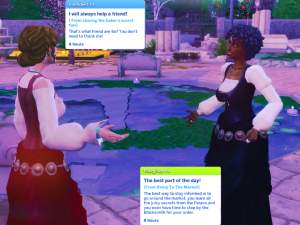 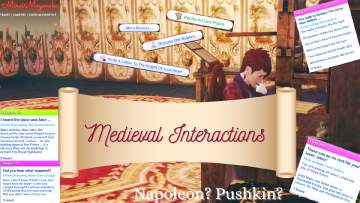 Make sure to read my TOU in my profile

Do you enjoy playing the Sims in a specific historical period? Maybe medieval ages? You have a bunch of Medieval-themed CC as well? Then you are like me! But you know what I found while playing? That I really want contextual interactions for the time frame I am playing in. I always wanted my sims to be able to discuss the Plague (something of huge importance for this time period), or just to gossip with the neighbor about the Nobles and how they have everything, or ... maybe even writing a love letter to my shiny Knight, who is fighting another war for the honor of the country ... I mean, there are so many possibilities. And that's how this mod was born.

With that being said, the point of this mod is A. To bring some life to your historical sims and B. I personally wanted some old-fashioned romance (call me corny, but I adore poems and letters), so even players who don't play historical sims, might enjoy the romantic side of the mod.

With Medieval Interactions, you can discuss subjects that were more common for medieval times (although some of them are probably used today as well) and like this, you can feel like you are back in time for real.

So, what this mod includes?

I am offering you 12 brand-new social interactions and 6 computer interactions. Hold on a second, I know what you're thinking! "Medieval and computer?? What the ... girl??", but bear with me! I found this to be the best option for my "write letters" interactions (and also there are amazing CC's out there which are very medieval-themed, yet have the function of a computer).

When you click on a target sim, you will find a pie menu called "Medieval Interactions". If your Sim is in the range of young adult-elder, they should see at least 10 unique interactions. Each interaction gives moodlets to both - the actor and the target sim. Also, if you use interaction "Share secret tips you learned from the baker" it will increase your Target Sim's baking skill, and the interaction "Gossip about the liturgy this morning" will increase the Actor's mischief skill. The socials cannot be used when interacting with a child (I personally didn't find any of the topics fit for a child). Teens have access to six of the total interactions.

"Discuss Possibility Of Arranged Marriage" - This is a sad topic, but unfortunately very common for the Middle Ages, this topic can be performed only from a parent towards a teenage child (meaning that a random adult can't have this conversation with a teenager). This interaction is not autonomous, also if the interaction is successful the moodlet is neutral (since it's just a discussion), however, if the interaction fails, the outcome will be different depending on the traits of the participants. (self-assured and ambitious sims tend to get angry if the interaction fails).

"Share Excitement From Receiving A Letter" - This interaction is only available to women, teenagers and children after reading a letter from their family. Now you probably wonder why I didn't include men as well? The reason for this is, because the moodlet this interaction (read a letter from your family) gives to the male sim, implies that he is on a pilgrimage, and the way I imagine a pilgrim is as a lonely traveler, so he doesn't have with who to share the excitement. For the female, I imagined she has married off away from her homeland and she shares her excitement with the new household.

When you click on the computer, you will find a new pie menu called "Medieval Daily" that contains 6 new interactions. If your sim is a child, it will see only two interactions: "Write a letter to your family" - this interaction increase the writing skill for the teen-elder sims and the social skills of a child sim. "Read a letter from your family". Both interactions give different moodlets to the actors, depending on their age and gender.

Young Adults-Elders will be able to see the mentioned interactions plus three more:

"Check the Results From The Joust Tournament" - this one is pretty self-explanatory, you just go on the computer and check the results (sorry but you don't receive any money, just a moodlet, at least for now). This interaction is not available for a teenager.

"Read A Letter From Your Significant Other", and "Write A Letter To The Knight/Lady Of Your Heart". Now, this is my favorite part of the mod! (and the one that took me the longest to make :D). These two interactions give a long-lasting moodlet to your sims (7-8 hours Flirty). After the interaction is performed, the description of the buff they receive is a quote from a real historical figure's letter and each day is different. Famous people included but not limited to Napoleon Bonaparte, Henry VIII, Emily Bronte, Tsarina Alexandra Feodorovna, Ludwig van Beethoven, Alexander Sergeyevich Pushkin. Also, these interactions are available for teenagers as well.

KNOWN ISSUES: I don't know if issue is the right word, but some people might find it annoying. If you have in your game a mod that enhances the longevity of your moodlets, it will affect this mod as well. Generally, the longest moodlet you can have is 7 or 8 hours, but I observed that if a mod that enhances the longevity is present, my moodlets can stay up to 2 days. So bear this in mind.

If you want to keep up with the latest versions of this creation check my Blog from time to time for new updates. Outdated Mods can break your game!

The mod was tested with all mods by Lumpinou and KawaiiStacie, Wonderful Whims, Better Babies, and Toddlers and has NO issues.