14 Comments / replies (Who?) - 9 Feedback Posts, 5 Thanks Posts
This is a new mesh recolour, and means that you will need to download the particular mesh itself in order for this to show up in your game. See the Meshes Needed section or read the text for more information.

Update 2022-05-09:Many thanks to mustluvcatz for pointing out the solution to the transparency issue.

Original Post:
I really like CatherineTCJD's Wallpaper Overlays as well as HugeLunatic's Kitchen & Bath Add On Tiles. So I thought it would be neat to have a combination of the two ideas.
I use a lot of backless showers (links under "CC/Mods used for screenshots") in my game. Firstly, because I play with walls down most of the time and don't like having a huge block of shower obstructing my view. Secondly, because I like to select tiles matching the wallpaper of the rest of the room. I play with Premades a lot and often times I like to leave the original furnishing as it is. However, with backless showers that would mean that my Sims would end up with soggy wallpaper more often than not. My solution was to put tiling around the shower. Still, I didn't like how the tiling would "break up" the wallpaper or go around one corner but not the other (see example picture below). So that's why I thought CatherineTCJD's Wallpaper Overlay would be the perfect solution. Mesh NOT included, get it HERE!
These recolours are for the "INside" Edition.

Another neat idea, in my opinion, was to make Maxis floors into walls, as Sophie from Sophie's Downloads did for some of the Life Stories floor tiles.
I used neither HugeLunatic's nor Sophie's files to create these Wall Overlay recolours since I wanted them to be a different height. So all recolours you see here are made from files taken from the game itself using the HomeCrafter Plus or from Argon's Life Stories Build Bundle. Nonetheless, were it not for CatherineTCJD's idea to use wallpaper overlays with Maxis tiles, HugeLunatic's idea to make Maxis tiles shower-height and Sophie's idea to make Maxis floors into walls I wouldn't have started this project. So all credit goes to those three for these ideas.

Height-wise I tried to fit the recolours to the height of the BG Coloratura shower. My line of thinking was that the BG cheap shower, the BG tub/shower combo and the UNI communal shower would all be more forgiving to different heights. So wherever possible I tried to get Coloratura height. Where the pattern did not allow for it, I made it higher than that. That is why the heights are different for different patterns.


Fixed, see update 2022-05-09 for more info.
In addition to using tiled walls from the Base Game, Expansion and Stuff Packs I also did some from the Life Stories conversions as mentioned above. Then I got a bit carried away by the idea of making floors into walls and used tile and stone flooring to create a bunch more recolours. Files labelled "Floor" are taken from tile flooring, files labelled "FloorwStone" are taken from stone flooring. That should make it easier to find the corresponding floors in the catalogue.
Lastly, I made some recolours using the BG beige Coloratura recolours. I like them so much I wanted to use them for other showers as well.
If anyone wants those Coloratura tiles and all those floors made into actual wall coverings, I uploaded them separately.

I compressorized the files and named them so that they get ordered by tile size if you plop them all in the same folder. Additionally, I put them in subfolders according to EP/SP. This was to make it easier to find a specific file using the swatches. There are 129 recolours after all, so you might want to delete of some of them. I included swatches in the download to make that easier. I ordered them by EP/SP by looking at which flooring was in the premade Maxis collections. So I'm not sure that my labelling is 100% correct.
That means if you leave the recolours in their subfolders, they will be sorted by EP/SP first and then by tile size in the game. If you plop all recolours in the same folder, they will be sorted only by tile size in the game.

Back to download view
14 Comments / Replies (Who?) - 8 Feedback Posts, 5 Thanks Posts
Hide Thanks Posts for this thread (Show only feedback)
CatherineTCJD

Perfect! Thank you sooooo much for these!

Hint - The newest, most up-to-datest (and least confusing, tbh) way to download my original wall-overlays is through my blog: Sims2VirtualRealty
There, you'll also find (at the bottom of that page) links to more add-ons of the idea from xmathyx/littlelittlesimmies.

I am really looking forward to using these add-ons and all the tiled walls you just released! Thank YOU!

Please ~ support my TS2 habit! Shop at my Etsy shops:

Thank you so much for all your overlays, I really like using them a lot!
Thanks also for letting me know about the new download link, I went ahead and updated the links in my post accordingly.
I'm really happy to know you like the recolours and walls, thanks a lot for your comment!
mustluvcatz

@Corax
I wonder if your known issue has to do with the TXMT settings and if the solution here: https://modthesims.info/showthread....ght=overlapping may help.
Buy Me a Coffee? * tumblr
Corax

@mustluvcatz
You were right, that solution worked. Thank you so much for your help!
mustluvcatz
Former Hamster
retired moderator THANKS POST

@Corax
I knew it, lol. And you're welcome! :D
FemGamerPlayer
Field Researcher
THANKS POST
#7

THANK YOU! This will make backless showers/tubs SO much more user-friendly now!
Corax

Great idea! Thanks to all the creators for this.
loooglee
Test Subject
THANKS POST
#10

Yay! I was so excited to see this! I use these same showers a lot and have also never been happy with the clonky transition from wallpaper to tiles... Thank you so much for this really neat solution!
*downloads and runs off to update every house in the 'hood!*
Corax

That makes me extremely happy to hear, loooglee!

Thank you both for your comments!
Airazor65
Field Researcher
THANKS POST
#12

This is awesome! Would you consider making default (the original mesh) height versions for the floorings too?
Corax

Thank you!
I'm not quite sure what you mean by that, could you specify a bit further?
Airazor65
Field Researcher
#14

Quote:
Sorry, I meant these, at the regular height (low on the wall like CJD's original tiled walls): https://modthesims.info/d/666914/ma...iled-walls.html
Corax

Yeah, I could see myself doing that sometime in the future. I don't know when yet, but I'll put it on the list. 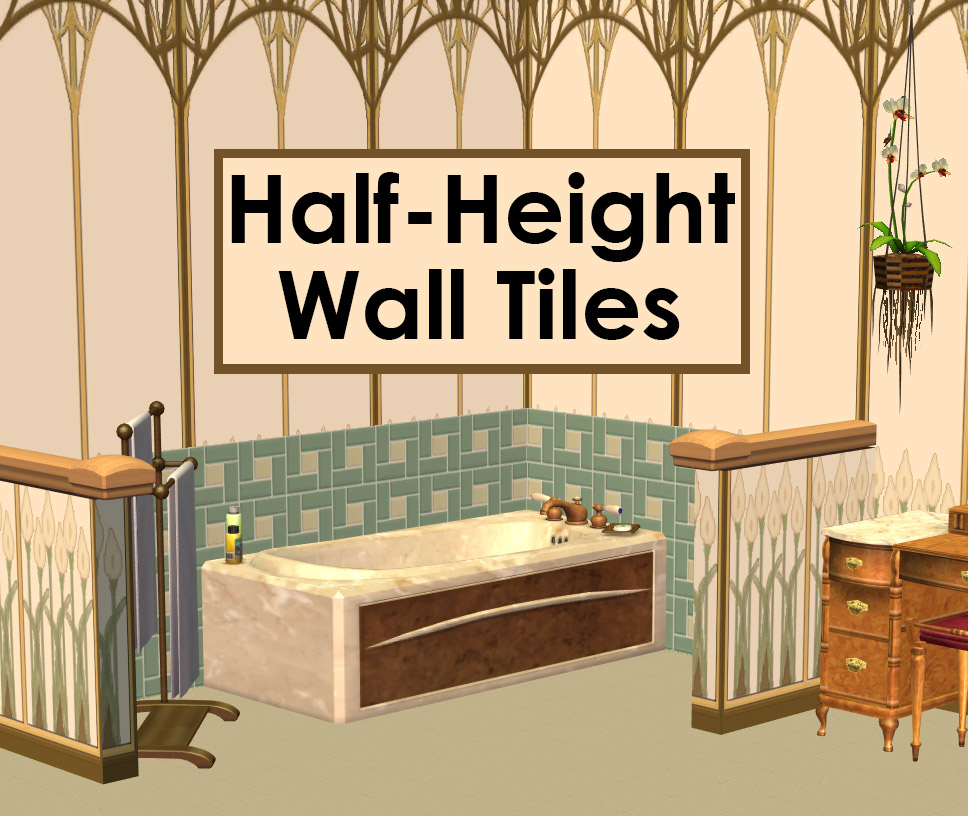 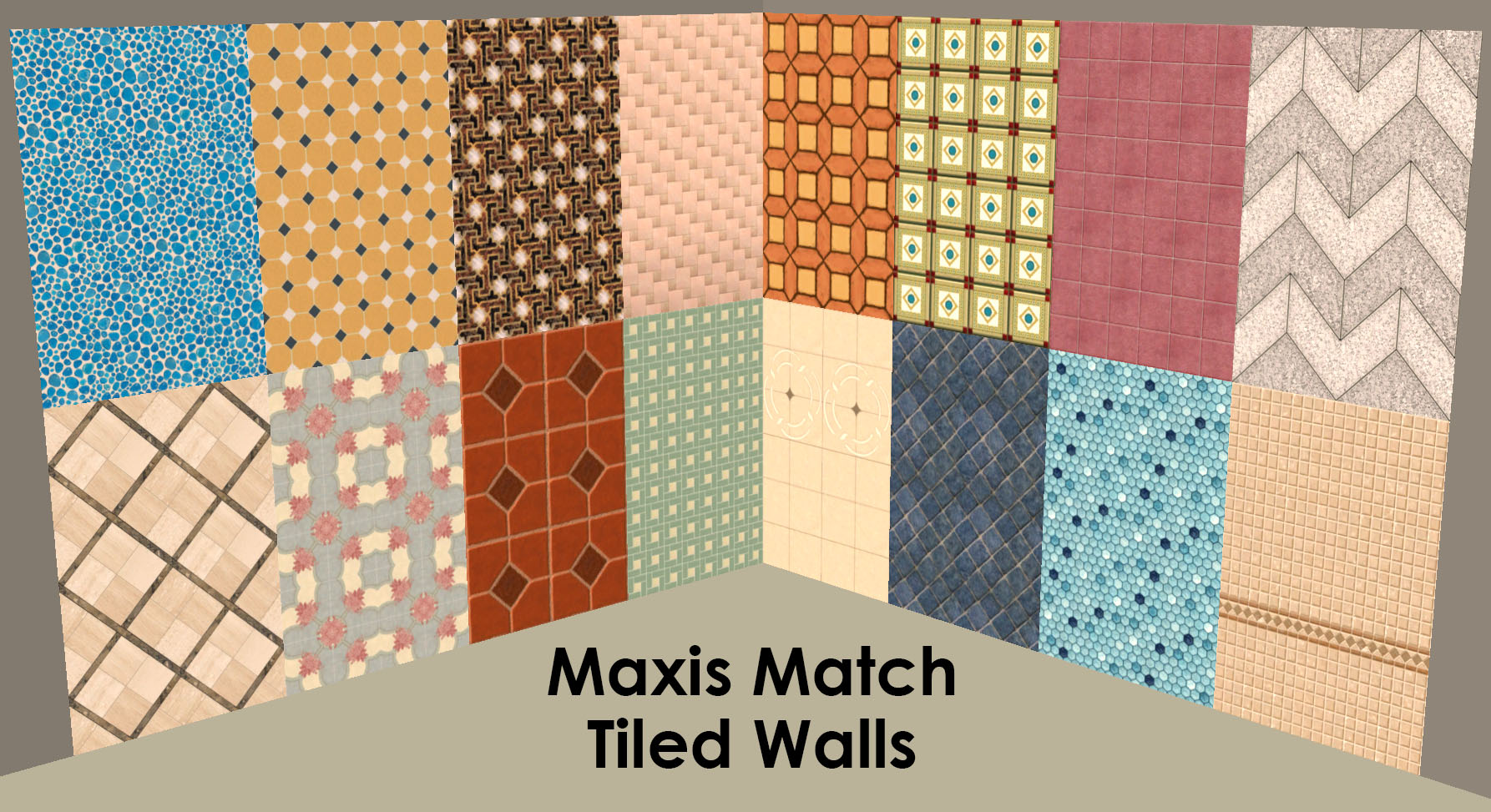