Guy rolled the want to get engaged to Daniella. She was thinking about it.
I was planning Guy to ask her to marry him but they autonomously got steady. 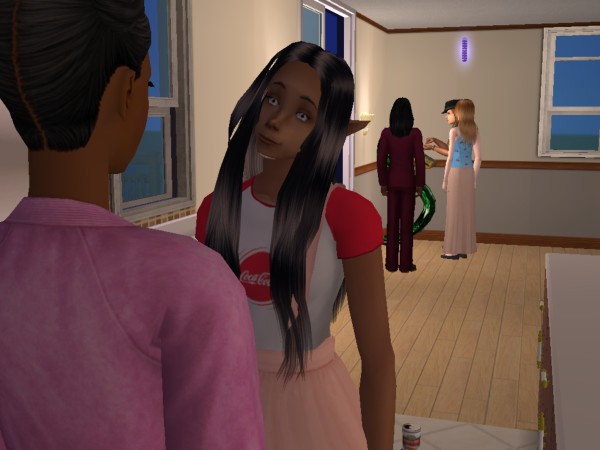 Pointy ears. Check. Ability to posses an otherworldly beauty while simultaneously showing the ability to stick teeth through chin? Check. Dress sense that makes me actually happy I downloaded that bonus shirt from some old EA promotion and then either townified it without realizing what it looked like or neglected to notice it was already townified? Check, and that's not even showing her kitty-cat stockings.
Yep, it's obvious she's a member of the fae, attracted to the dwelling of the prince of faeries. (And yes, that light patch under her chin is her teeth.) My game unleashed the newest crop of dormies at a good time. (Further specimens can be seen gathered around Puck in the background.)
Please support the Sim National Labs Folding@Home team!
Stuff I've made!
Essa 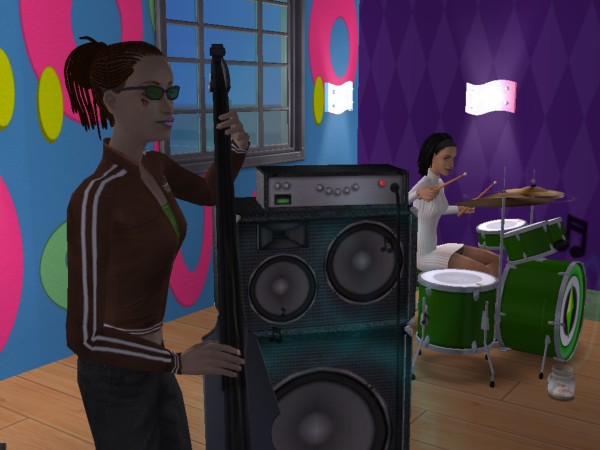 Music is not exactly the correct description for the creations Melody Tinker weaves from her own playing, ambient sounds, and on occasion when she is joined by others, the stumbling attempts to keep up with her that soon have human students flagging and giving up. As a vampire, she has the advantage of being able to play all night long, and that's what she likes doing. 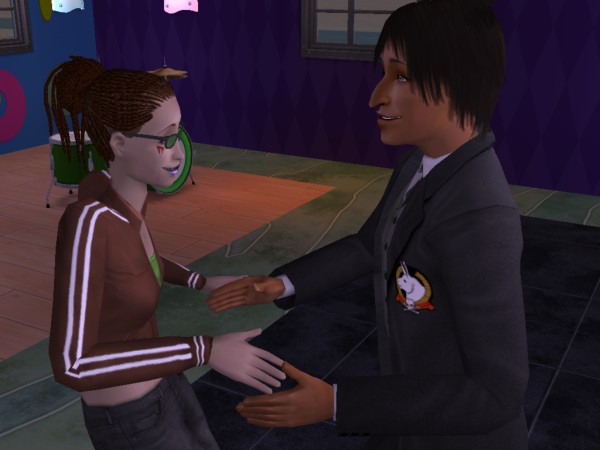 She wasn't expecting to get a tip her first night playing at the Wasteland Lounge. And $50, plus a compliment? This man in the llama jacket must understand how she thought. Well, at least a little bit.
Armando Trimble swayed his body in time to the combination of muffled canned music seeping into his ears and its faint vibrations through his feet. He was surprised to realize the girl who'd introduced herself as Melody -- a perfect name! -- was dancing to the same beat. Most people didn't -- not surprising, given how he heard what they were dancing to. Wall speakers just didn't produce enough vibration to dance well by feel... For a moment he wondered if Melody's bass-playing had been unexpected music to his ears because she was hearing it as he was. No...she'd clearly not been lip-reading when they talked, and she didn't seem to realize he was. Not that she'd acted like she thought he was staring rudely at her or being inattentive either... 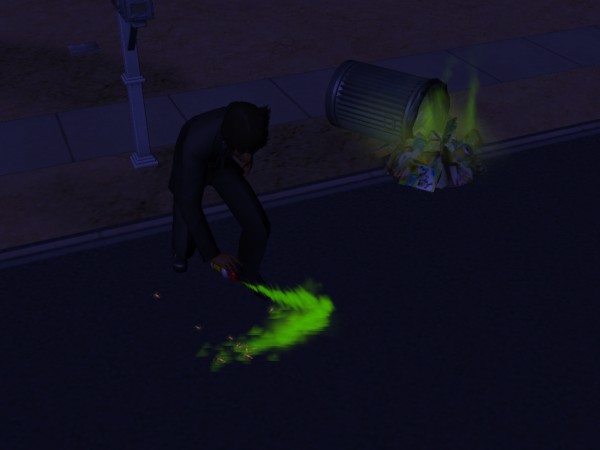 She was just talented, he decided. Just talented? She was also kind, accepting, intelligent, and had a wicked sense of humour. And she said what she meant, which was helpful. The least he could do was clean up her sidewalk and roadside for her.
And yet there was something about her -- and not just that cut on her face she'd not mentioned and he'd been too hesitant to ask about. She'd said she had accommodations that allowed her to not go to class, so she had some kind of disability...
It didn't matter. Melody, like her melodies, was perfect to Armando Trimble.
Please support the Sim National Labs Folding@Home team!
Stuff I've made!
Peni Griffin 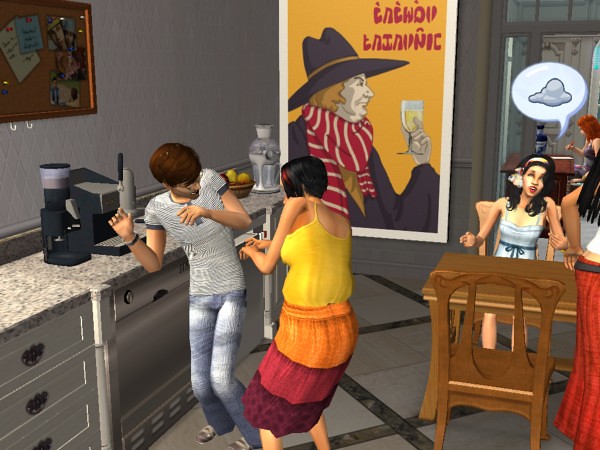 Ginevra Hawkins would laugh at you if you told her a Junior in college was too old to be a ticklemonster! Pollux Stacks doesn't really mind. 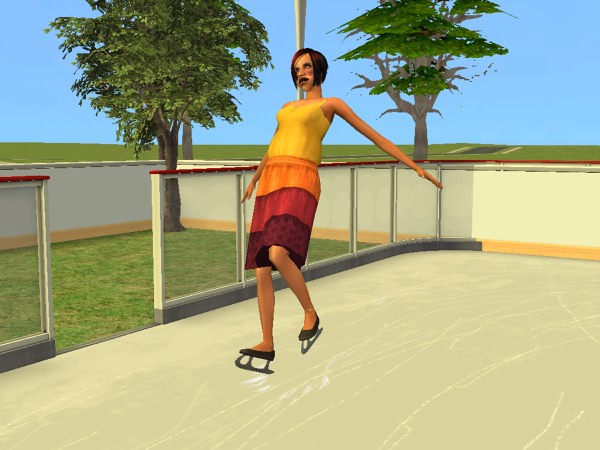 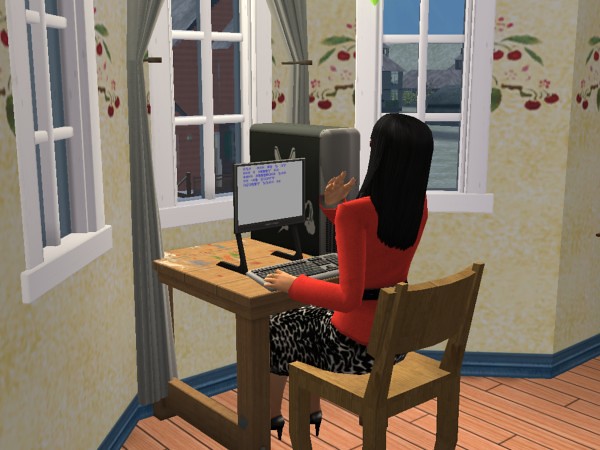 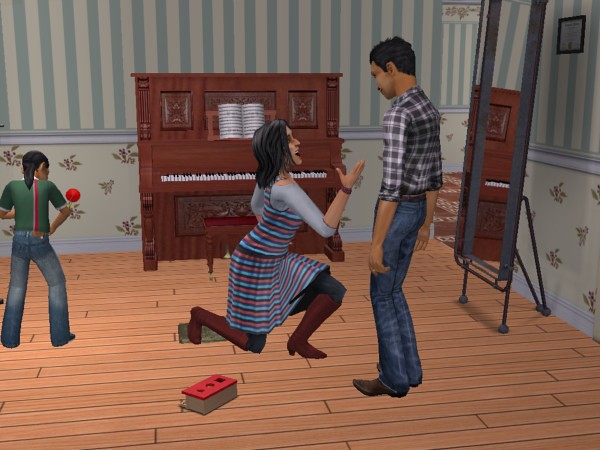 Minerva Newson and Miguelito Casa have come home to celebrate a family birthday, but they are always ready to celebrate each other!
Ugly is in the heart of the beholder.
(My simblr isSim Media Res . Widespot,Widespot RFD: The Subhood, and Land Grant University are all available here. In case you care.)
Essa Ariana Campelle
She's a bookworm who like spending most of her time studying or gaming. Her sweetheart is waiting for her in the main hood.

Stella Terrano with the dorm pet Sticky and Delilah O'Feefe with her fiancé Eric Swain. Whoa honey, could you throw that food a little more? My clothes aren't stained yet.
"Oh look, my grandchild is now an elder. They grow up so fast. Gee, I wonder when I'll finally graduate college." Sims 2
Pizzatron-9000

We have some pretty fine University casts here thus far. I guess I'd better chime in with mine.

The Hoh-Hoh-Urele Sorority, comprised of:

I have plenty more college students, too. I just have to get screenies of them too, that's all. Team Adventure!
I had a little fun with this bunch.

Regretably, "The League of Exemplary Wayfarers" and "The Courageous Adventurers Eight" were too long for the Household name slot.

Three guesses which Career Track they're all angling for after they graduate. Ain't nothing hotter than a buff guy in a surgical mask
"Oh look, my grandchild is now an elder. They grow up so fast. Gee, I wonder when I'll finally graduate college." Sims 2
HaphazardSim
Lab Assistant
DELETED POST
1st Nov 2015 at 2:09 PM

This message has been deleted by HaphazardSim.
HaphazardSim
Lab Assistant
DELETED POST
1st Nov 2015 at 9:32 PM

Georgia Newson made it to University! She will probably have to make the dean's list to keep up with the tuition, but she is just happy to be there. 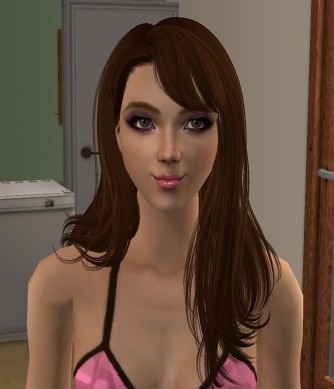 My latest set of students.

First up are the twins.
Raina Jenkins. Psychology Major.

Another of the Jenkins cousins.
Leanne Bruenig-Jenkins. Drama Major.

Loving the eyebrows on your sims. Could I be so cheeky as to ask where you got them from?

Also, where did you get Liam Jenkins' glasses from?

And if you're using make up on Latikha Patel and Jessica Allen may I ask where you got them from too?

Pretty sure Liam's glasses are from here http://modthesims.info/download.php?t=470923

Latikha and Jessica are only wearing eyeliner, but I don't know where I got it from or even who it is made by, sorry.
NewSimgirl2011
Instructor
#391

Newest three YA to go to uni.

Jacob who has changed his looks from teen as to be unrecognizable. He's not ugly, but boy did he get a big chunky head.

The girls, Sunny left and Elizabeth who both look the same.
"I dream of a better tomorrow, where chickens can cross the road and not be questioned about their motives." - Unknown
~Call me Jo~
Careers and businesses for sims
What I Love About Toddlers
joandsarah77

"Dude, why are we doing this again?"

"I dream of a better tomorrow, where chickens can cross the road and not be questioned about their motives." - Unknown
~Call me Jo~
Careers and businesses for sims
What I Love About Toddlers
Training_Cookie

Freya Anderson has arrived at college! Her boyfriend Choji came with her and when not attending classes or exams they're practically glued at the hip! They also got engaged, hence the rings!

Chase Grunt (son of Tank Grunt) was born in this dorm and now here he is living there. He's very serious about college, he wants to be a doctor. 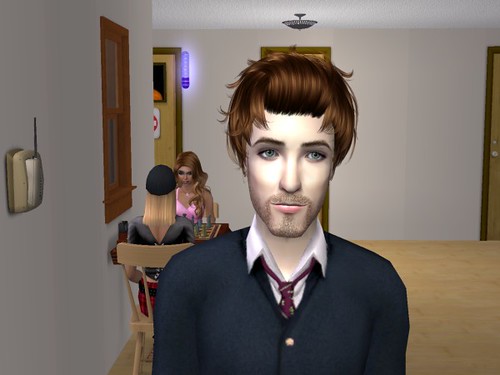 He thinks he found the girl he wants to marry someday. Naenae Raha from the secret society. 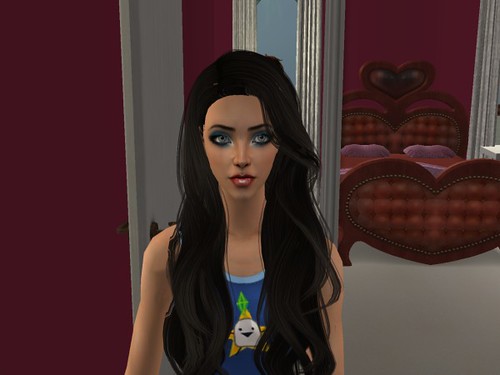 He shares a dorm with Taylor Traveller (daugher of the late Trish and Trent). This is the same girl who seduced her sister Tabitha's husband (David) when he was drunk and then had his baby before leaving for college. Tabitha and David are caring for the child. Her sister doesn't know the father is her own husband. Has Taylor changed her ways in college? Nope, she has slept with every guy in the dorm. I don't when she is going to settle down. 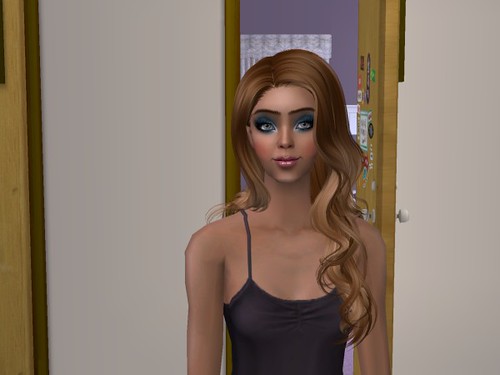 Thorne Newson also in the dorm. He is the son of Tank Grunt and Ginger Newson. He wants to be a scientist. 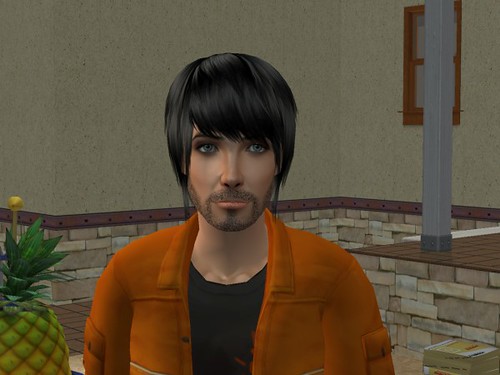 His girlfriend is Ivy Goss, a uni he met at the student center. 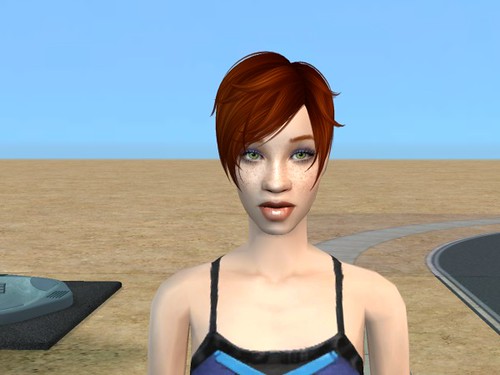 From the director of the hit movie Zombies!!! comes the hit summer film, Zombies II: Zombies Go to College!

Starring Bobbie Styx, the one with the big mouth!

Sam Acheron! He reads a lot because he's a big fan of braaaaaiiins!

And Linda Cocytus and Joe Phlegethon! They play billiards sometimes!

They have come to Sim State U to terrify the campus with their horrible odors and listless shambling! Be appalled at their ghastly, frequent bathroom breaks! Flee in horror as they clean out the entire fridge and fill the cafeteria with dirty dishes! Cringe in dread as shower room after shower room runs over with menacing floods!

...okay, these zombies might actually be kind of lame, but they're zombies! Horror has a new, familiar, getting-to-be-pretty-cliché name! Zombies II: Zombies Go to College, shambling to a Student Lounge near you in 2016! So... this is the Cow Mascot no one likes? Wow, if I was a sorority sister I knew what I would do.
http://charliethesimmer.tumblr.com/
egswanso

This is my Class of Week 11, scheduled to graduate this week:

Some of the newest uni students in my current hood! There are so many!

All four girls are the daughters of the three Grunt brothers. One is already ahead in the game of producing a new generation (she left her daughter with her parents when she left for college) while the rest are finding their "mates."
Duvelina I know the boys at the fraternity really like you Wendy. It's just that Kelly doesn't. Please stop.
http://charliethesimmer.tumblr.com/
Back to top