I like those intricate ideas of connecting the premades, it's such a interesting part of the sims' worlds and fandom. I'm playing the three premade families in Komorebi: Ito, Nishidake, Akiyama, that I've all moved to the Wakaba neighbourhood, and am already on my way to break up two of the marriages to continue on the hinted love affair between Megumi and Kado. I will make Jenna fulfill herself and move home before that though, but Naoki being mean he gets what he gets!
Advertisement
SunshineyDays22
Test Subject

Fun to read all these. I'm trying to finish a legacy challenge! I've started a bunch, but I do want to finish one eventually!
andes
Field Researcher
#2553

I'm testing this mod now, and am killing sims left and right, and can't stop laughing at it! (sorry.. - or am I..?)
https://modthesims.info/showthread.php?t=663201
Volvenom

I have been playing the same family for a while actually. The Sinnis family. They are a couple with a YA daughter. They are educated lawyers and the daughter is doind a similar degree. I'm doing so many things though she had F last term.

I'm building so many houses during this holiday and has started using my own Wentworth walls again. I must say those walls are beautiful if I may be so frank

They do look pretty! (I went googling). Vintage is a good look, and useful.
daisylee

So recently I have been playing with the "pre-made" sims in my desktop install. Mr Gavin Richards is, as you might know, one of the "standard" sims from the game and as he was single I let him having a little "affair" with a sim that my game created. Her name is Ann Dahl and as an adult she is slightly older then Gavin who is still a young adult in this install. Everything went well and eventually I let Ann get a divorce from her husband Martin. Not because he was a bad sim, because he was very boring... There was a little drama but only briefly, everyone are friends now and can have a nice relationship to each other. Ann and Gavin now live in Newcrest and in the same world lives her ex-husband with his new family. 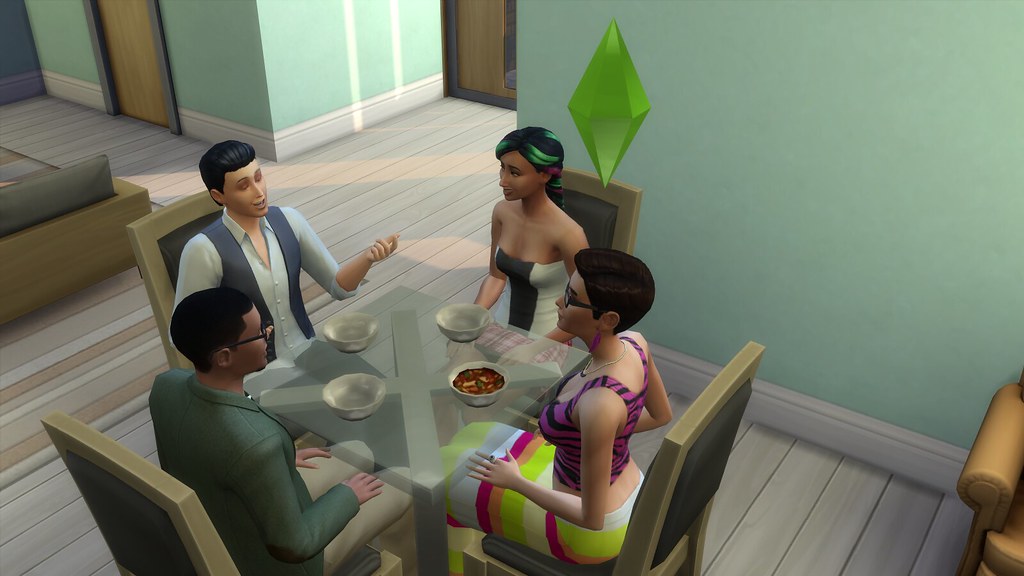 Ann having a friendly dinner with her fiance and her ex-husband (the dark haired man on the left). The woman with the multi colored hair is just a friend of the family. 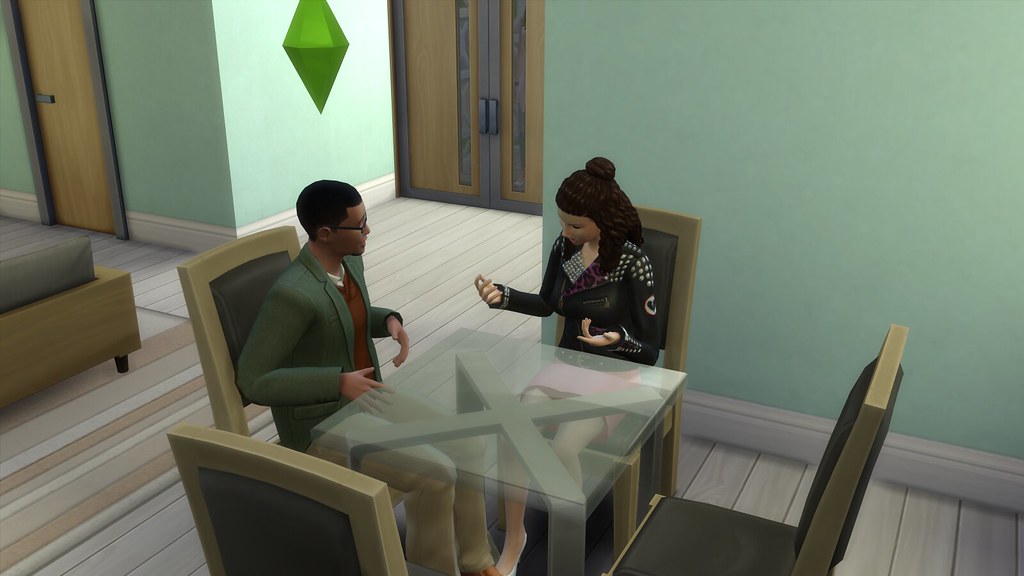 Gavin talking to young Ingrid, the daughter of Martin and Ann. The teenager do have a good relationship with her mother and her mothers new partner.

Back in the days of playing the TS2 I did have a few sims who had children in game but I remember it as being very hard to play. In the TS3 I did not try it but now I really wanted to see what babies are like. I have been playing parents with a toddler before but not babies. So after Gavin and Ann was back from the date they had on Loveday I did make them "try for baby". And yes, it was successful. Ann became pregnant. This was an other thing I was curious about. Back in TS2 a pregnant sim always did get assigned some extremely boring clothes and I did remember what the pregnancy was like. And I must say that things did look easier here. The mother-to-be moved around faster and so. And she did not grow that big. 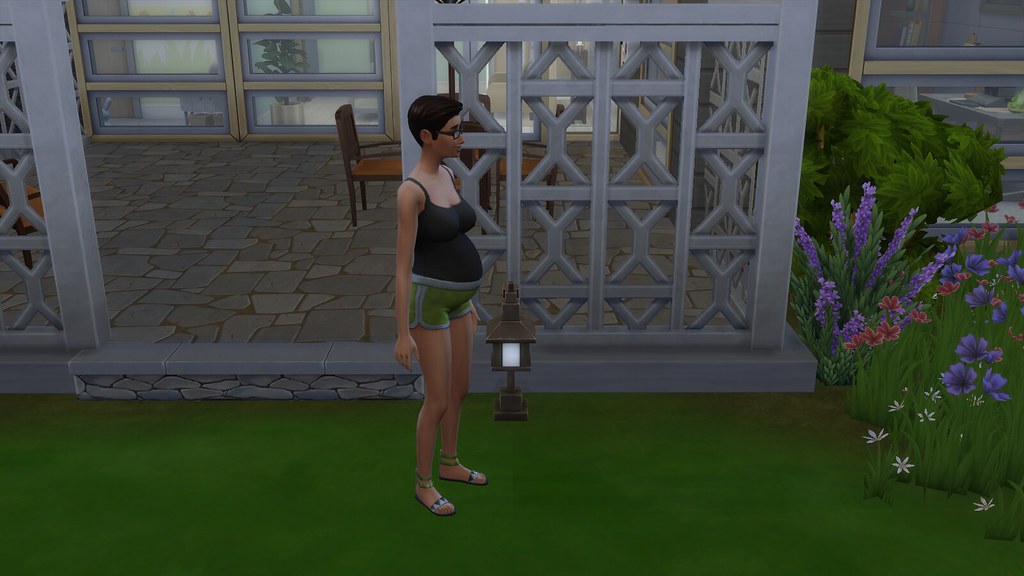 As told, I did not think she grow that big. Not considering what was about to come. the game did not tell me how many kids were would be so when I had two dialogs asking me to fill in a name I thought it was a glinsh... but it was not. Ann gave birth to twins! Two girls that I named Felicia and Fredrica. I did make a temporary solution for the new family members but when the babies turn into toddlers I would rebuild the house to get a better floor plan. And I will use a part of the patio for building. It's to big anyway and my sims don't use it... 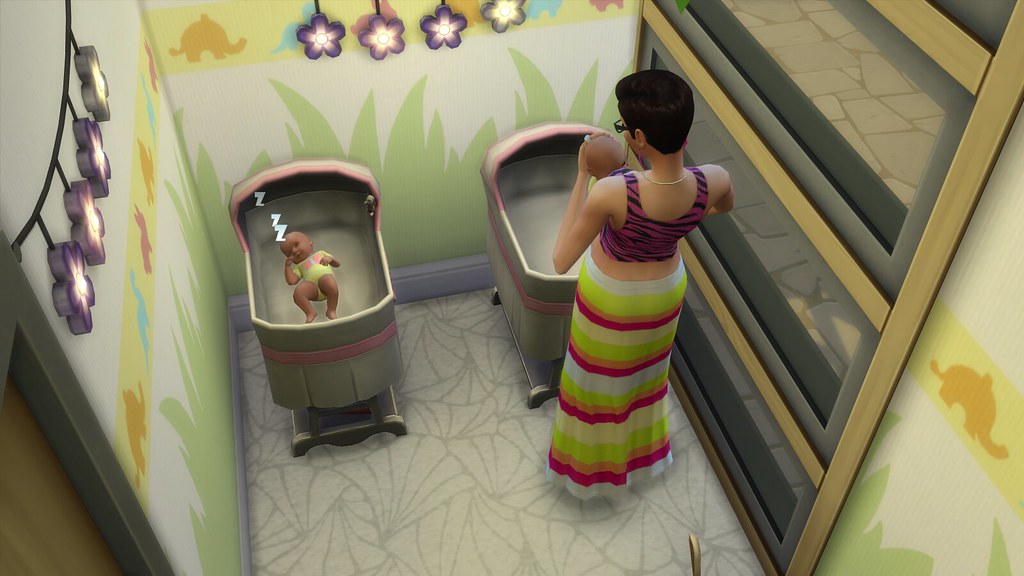 Ann feeding one of the twins. Yes, it's a very small nursery but that's just because I did use one of the bathrooms.
Dixieland

I decided to challenge myself and make another household. Actually, it's a household I've been playing since my Sims 1 days. I recreate them in every Sims iteration.

We have here eight women tending to a farm (well, the two that are interested in farming, that is), living in a very haunted house, all while attending university. It's been a complete nightmare to play through--and I love it.

So far the most notable events included:

Having a fantastic entry for the egg competition, only for the judge to repeat the same animation over and over again until the fair closed down without declaring a winner. Our amazing egg disappeared right along with the fair and was never seen again.

Learning that creating molded candles takes forever to do and it does not allow you to multi task--at all. Your sim will just stand there looking bored for an hour or more. They could at least allow them to make other candles with the portion of the table that's not in use, but noooo. And what's the deal with having a bunch of wraith wax, but not being able to craft a candle at the station with it?

The hiking feature from Snowy Escape is actually really fun--especially in the snow-covered sections. I zoomed out of the map to try to figure out just where my sims were and ended up completely lost.

A fool and his money are soon parted. ~ Thomas Tusser
TomboySimmer16

It was fun to read the updates. I'm currently working on an offsite Simlit. My four main Sims have yet to fall in love, and there's gonna be drama in the storyline.
Blogger: https://spellboundsimmersmagicaltales.blogspot.com/
Craft90

I encountered a few new things today. A server can apparently drop the food plate when they're trying to serve a Sim. A Sim will also sing along if they hear music that they like.
SimsNeedLots

My household is my simself and my bfs simself, we are now elders retired and enjoying our grandkids company, the eldest child just had his second child with his high school sweetheart who after years of on again off again, being engaged or married to different people finally tied the knot.

One of our twin daughters also just got married to her childhood friend, not before finding out he was a teen deadbeat dad so I definitely have my eye on him (the neighbourhood stories seems to have an obsession with giving freshly aged up teens babies)

While the other twin has no interest in love and is completely focused on her youtube/livestreaming career, she ghosted the boy she had a bit of a thing with after he hit her up looking for some sweet sweet clout.

The eldest grandchild is kinda just there, he goes to school and back spends a lot of time with his aunt and uncle no real ideas for how I am gonna develop his story, might stir up some drama with his birth mam since she dipped when he was a toddler after his parents split and never even tried visit the house.
Aarathiel
Test Subject
#2562

I am currently discovering werewolves! ^^
I play a family with two werewolves and I try to make them follow very different werewolf paths. It's been going pretty well so far!
Craft90

Been dipping my toes into the Werewolf pack... I have never seen a Sim lean against a wall before! I didn't know they could. Edit. Hold on... is "talk to" (dog) something all Sims can do or just a werewolf perk? Because if a werewolf could talk with dogs then that would be really neat!

Edit. I just realized that vampires has three ambitions (Knowledge, family and good vampire) while werewolves have just one ambition. It also only got one step. They don't seem to have spent much time on the werewolf gamepack... :/
Back to top