Jenny Singles is totally crushing on her dormie Zion, waiting to talk to him all the time. 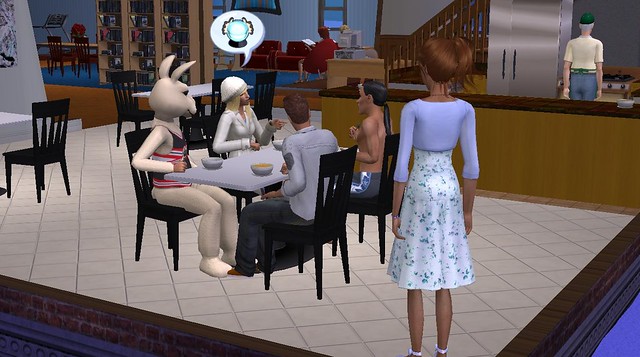 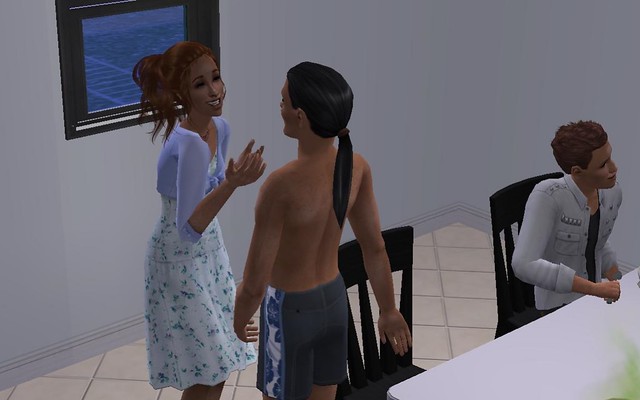 Little does she know that her other dormie Trent does to her what she does to Zion. Trent literally runs to her whenever she gets back from class to talk to her. Its super cute. 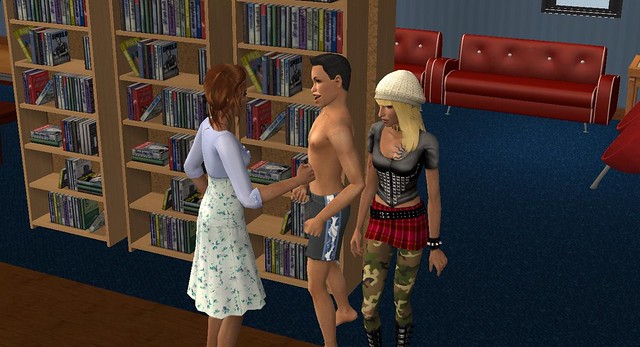 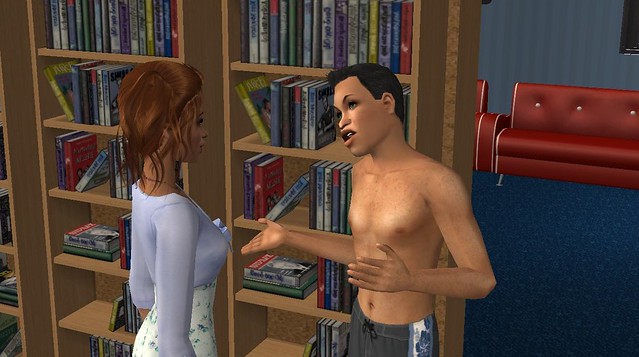 This penguin apperared on the dorm lot. I'm not quite sure where to put this. This is a college, but a community lot, main hood community college ... not a Uni college, although these buildings could very easily be put on a Uni campus. They aren't businesses, so I couldn't put them in that thread. They aren't creations in terms of modding and meshes, so I couldn't put them there. If I put these in the wrong place, someone please let me know!

I FINALLY finished this after a week and a half of working on it. There are the two Zarathustra parking lots and four campus lots. I had to think of a county name fast, since most community colleges are named after counties or townships, rather than an entire region, so since my subhood was Owl Beach, the county became Ninox County. (Ninox is a genus of owl.) And this is Ninox County Community College.

I don't think anyone wants picture after picture of the campus lots, and really, most of these buildings are pretty boxy. But then again, most community colleges DO have boxy buildings. While community colleges are generally not plug-ugly, most buildings emphasize form as equally, if not more, over function. So I thought a few pictures might be enough. I wanted to catch the feeling of a sprawling U.S. suburban community college. My kids and my husband both went to community college, and I almost was going to the same college as my husband until the very last minute, when I got a sweet four-year scholarship I couldn't resist to a traditional college. So this is a kind of affectionate nod to an alternative form of post-grad education. I should add that the main building and certain other buildings were inspired by an actual community college and a couple of house plans.

The street view is looking from the campus with the gym on down.

A somewhat closer view of the second campus. To the left is the library. The right is a small auditorium, which is set up for a fashion show. The obscured rear building has a science lab, a hot dog stand, the Fashion and Merchandising room, the admin offices (one which has the Mog job board), and CrispsandKerosene's slushie stand. Even community college students like to grab a quick lunch!

The close-up is of one of my teen's mothers, Janeva, in the small auditorium, modeling one of the fashions made by students in the Fashion Design and Merchandising program for orientation. Unfortunately, the Orientation Committee forgot to get rid of the waypoint markers. This is probably a good thing for Janeva, who has never modeled in her life, but not such a good thing for the photographer of the event, who is somewhat annoyed at the Orientation Committee's oversight. (I did switch out those chairs to more auditorium-like seats. I had packaged the lot with minimal CC and forgot to change those chairs to a favorite CC chair. Oops.)

I got the sprawling part right, anyway!

But all the campus buildings are fully functional. And there are plenty of things for Sims to do on each campus. I made sure of that. There are plenty of opportunities to improve all sorts of skills and interests ... much like a real community college campus.

EDIT... Alas. The Squinge/Chaavik mods mustn't have played nicely with one of my other mods, and lead to pretty much a massive across-the-board hood meltdown. (All my current hoods were affected.) I had to go back before I made these colleges to get my Uni dorms to run properly, and alas, no more community college. But these college buildings were tucked away in backup folders before the meltdown, and with a little tweaking, they will make fine Uni or even main-hood buildings. I'll just have to form my own community college criteria.

Thanks to ALL free-site creators, admins and mods.

King Court - 8 bed dorm
This message has been deleted by whoward69.
RoxEllen1965

Some fraternity shenanigans at Hoh Fruhm . Melinda Cosgrove, a party guest on the bubble blower Her elder sister and fellow party guest, Mira has snagged some pizza. No more pizza in that box for Cecily Louis standing behind her. 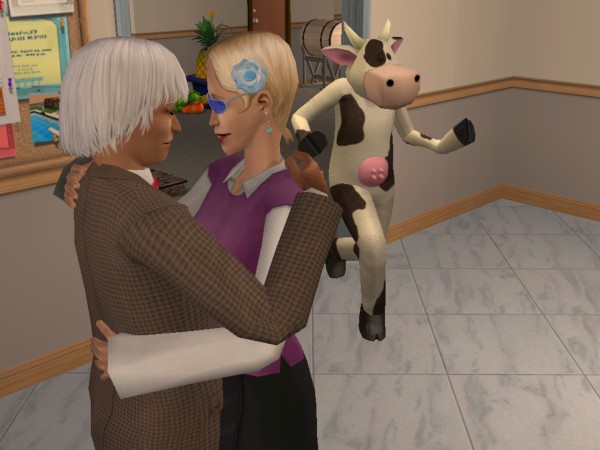 Miranda Capp is the perfect person to show everything wrong with Sim State (and really, the whole university system), while finding it personally advantageous and pleasurable. Professor Robert is smitten with her and writes all her papers for her. (She hasn't actually written one yet!) He has also paid very well, in advance, for her first WooHoo. The cow mascot approves of her cynical determination. Miranda knows that said cow, loving chaos as cow mascots do, will not report them.
((Now that I think of it, this may have something to do with the ethics class I'm currently taking...)) 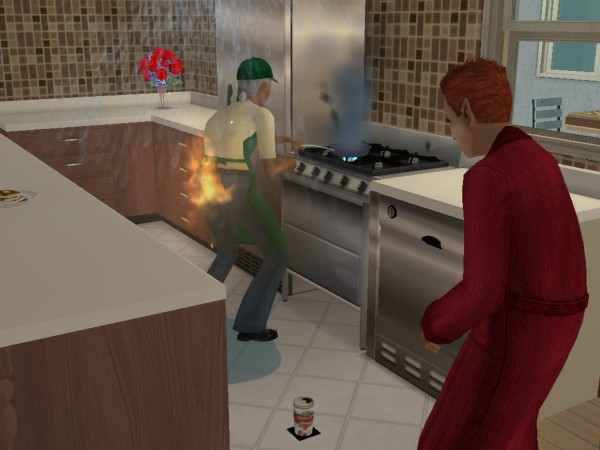 Puck Summerdream hates the cafeteria cook in his dorm with a vengeance, finding her creations nigh-inedible and being of the opinion she will poison someone if she keeps overcooking everything, never cleaning her pans, and dumping salt in all dishes to disguise the lack of other flavour. Thus, he was pleasantly surprised when she took the overcooking so far as to harm herself with it!
Please support the Sim National Labs Folding@Home team!
Stuff I've made!
Annaminna

It was very cold all the day

They needed to warm up.

Someone left full bowl on table... 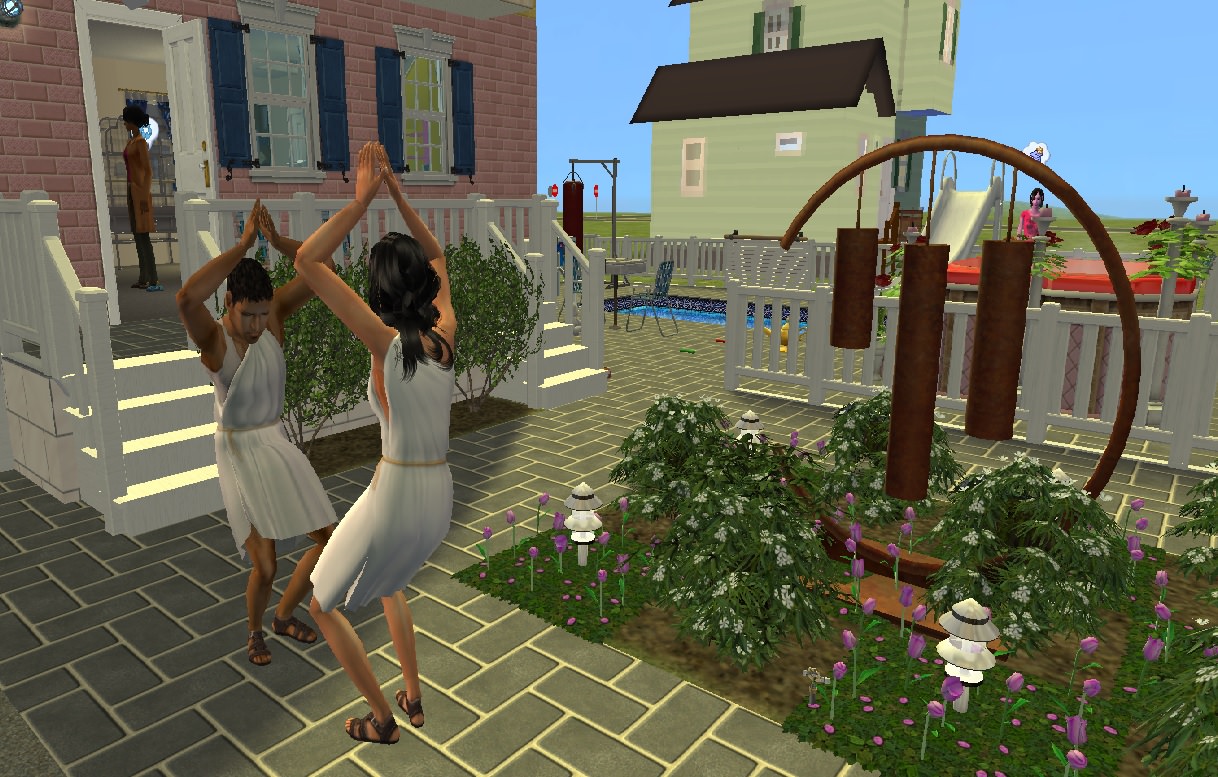 This is Brian Walker. A student who wants to become an actor.

If he weren't a vegan Zombie, he would love the outside pool, because it produces a lot of sun cooked and flash grilled brains.

He is a little bit slow and always forgets to put clothes on when he goes to classes, but I love him. 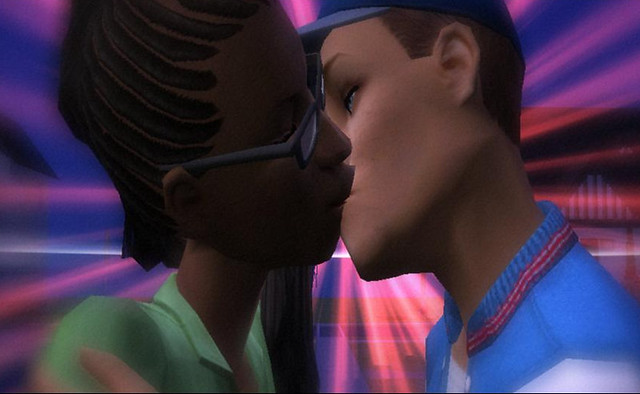 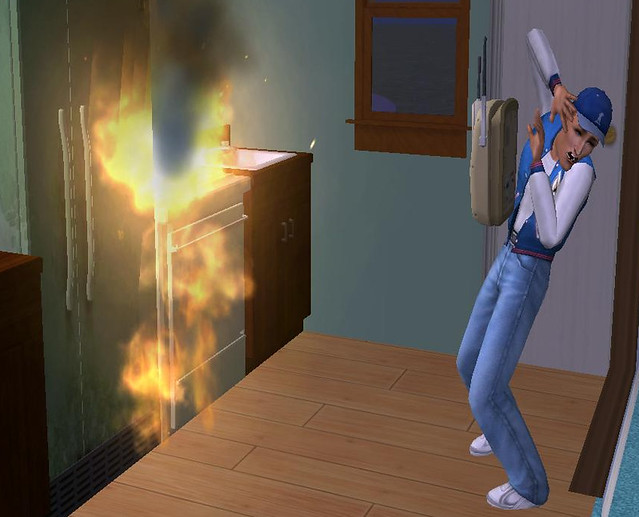 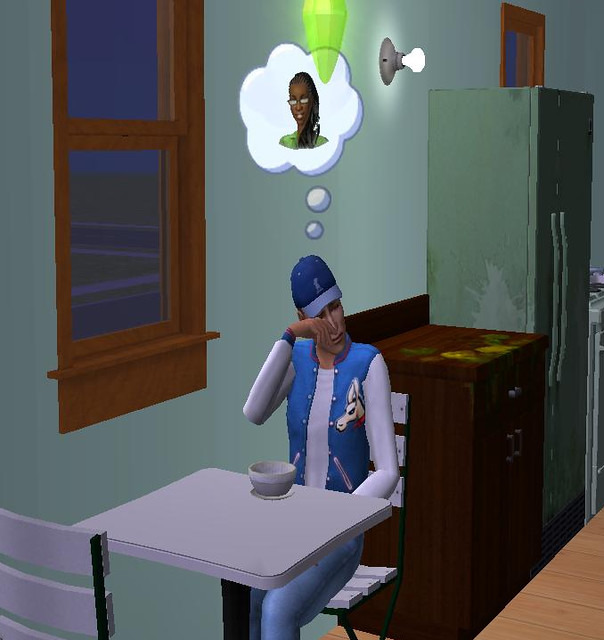 The cow mascot happened :/ You'll see his relationship with the cow is furious as well. He just finished kissing DJ and the cow strolls over and flirts with her, causing him to be furious with both DJ and the cow.
jdusk
Lab Assistant
#89

I've recently discovered that with a 48-hour semester mod I'm actually enjoying university rather than wanting to set the dorm on fire after a half hour play session, and have been playing it quite a lot. Probably because, well... 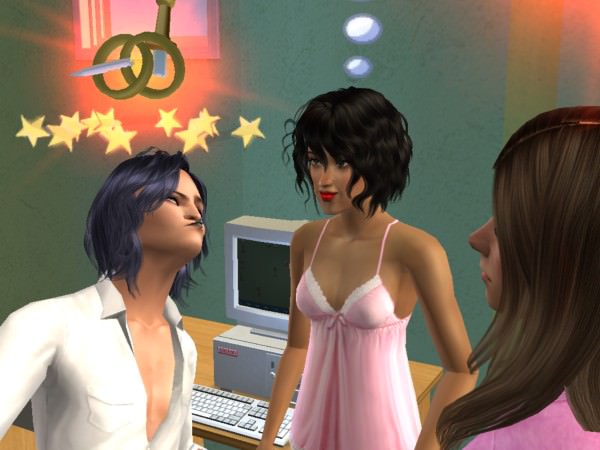 Also randomly assigned some premades to be a Greek house since apparently the Academie de Fancy doesn't have any Greek houses already, and they turned out to be serious tough guys. 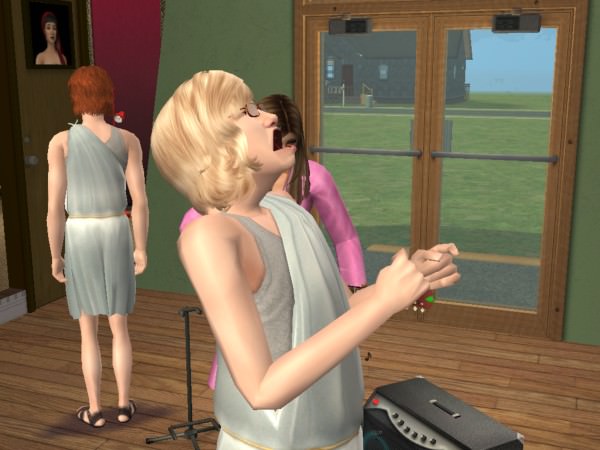 Biggest facepalm so far though was when one of the students had a routing fit when she tried to put a book on the floor, and I had to investigate from a different angle. 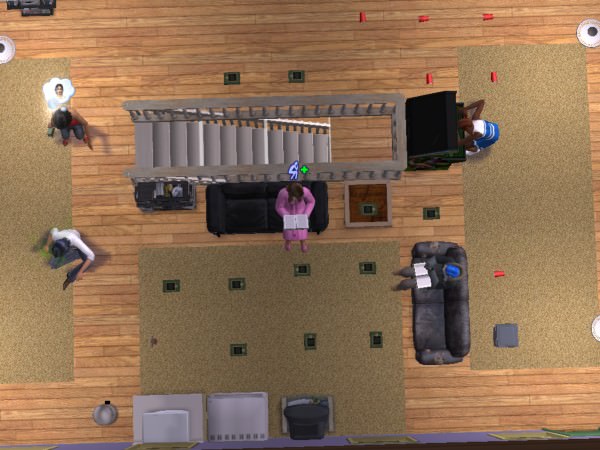 Because what everyone watching the Yummy Channel really needs is a healthy dose of School Spirit!

Lucas started on Uni and I'm crying, why am I crying?!

This message has been deleted by grammapat. Reason: picture not working
RoxEllen1965

For university students, dormies aren't terribly smart. These two would NOT stop snowball fighting. It almost made me wonder if they were trying to join their two silent friends in the background. 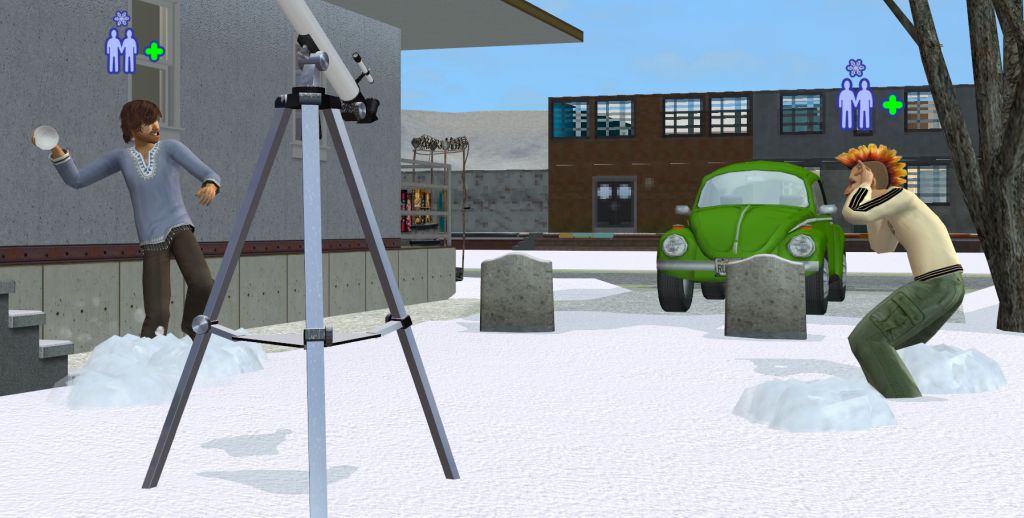 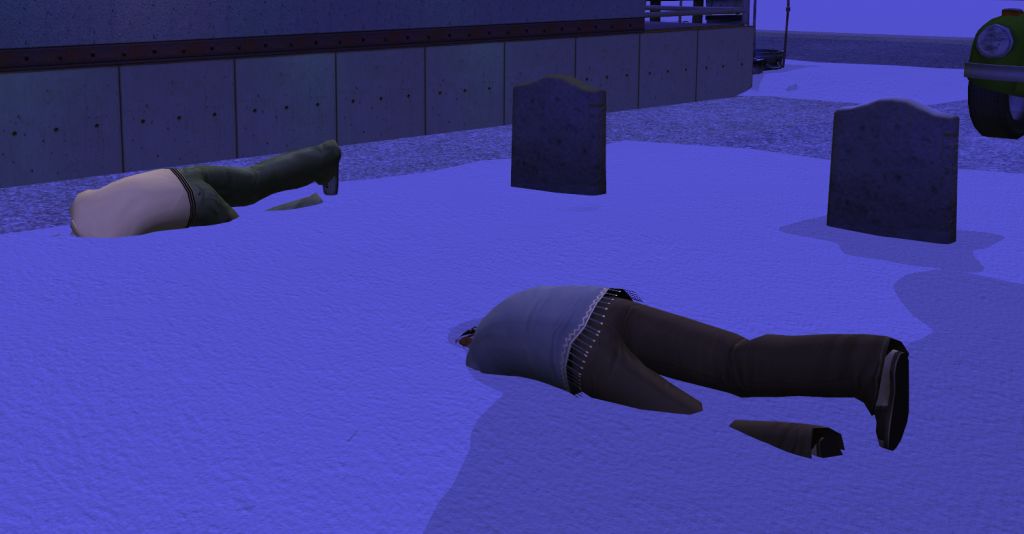 Melody Tinker is a bit grouchy and has a low tolerance for typical University foolishness. When the llama mascot interrupted Melody's game of pool with some of her dorm-mates, Melody wasted no time telling him exactly what she thought of him. (This is the first time I've ever seen a student "watch" a cheer and react badly to it - usually they join in enthusiastically.) 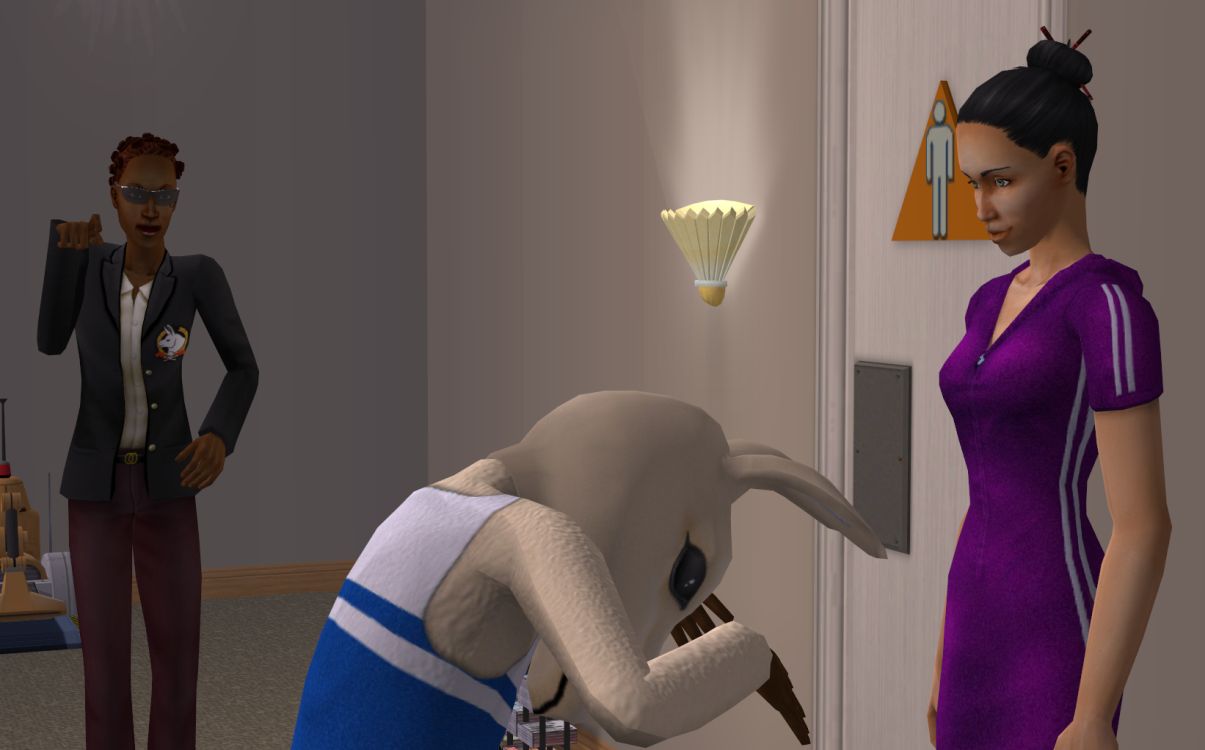 Toga party at the sorority and all Kevin Beare cares about is the bird. I thought it was sweet. 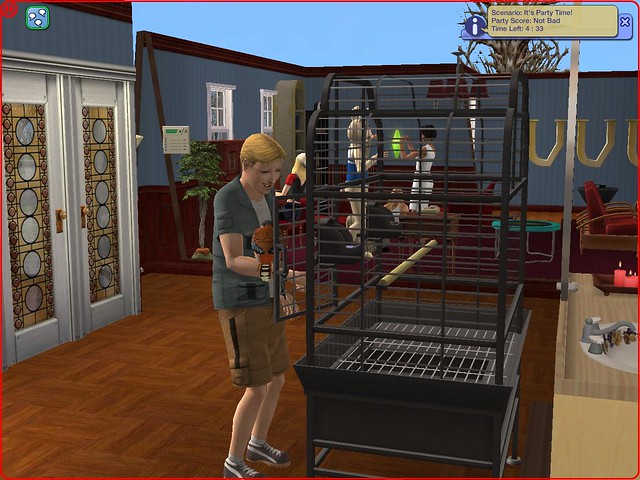 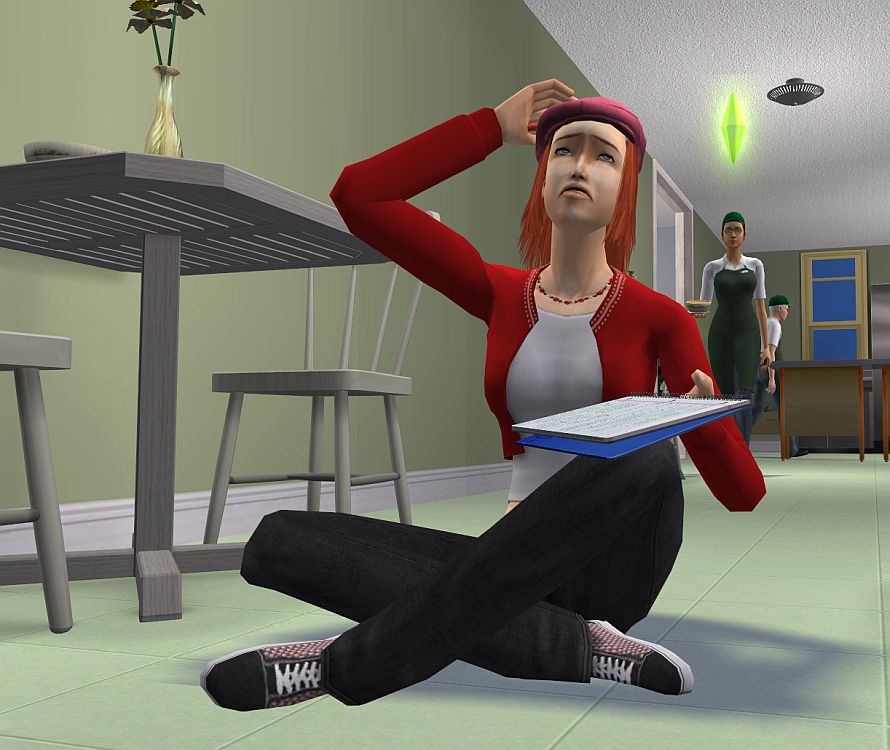 Just another frat party. Note: no Sims were allowed to die from their own shocking antics.
Namaste... or "go"
Aysarth

The coach barged into the women's bathroom to lecture my Sim while she was using the toilet. Now he can't leave.

He's been in there two days now, and dorm life is constantly interrupted by the sound of Old Man Crying. I wonder how long before the college appoints a new coach? 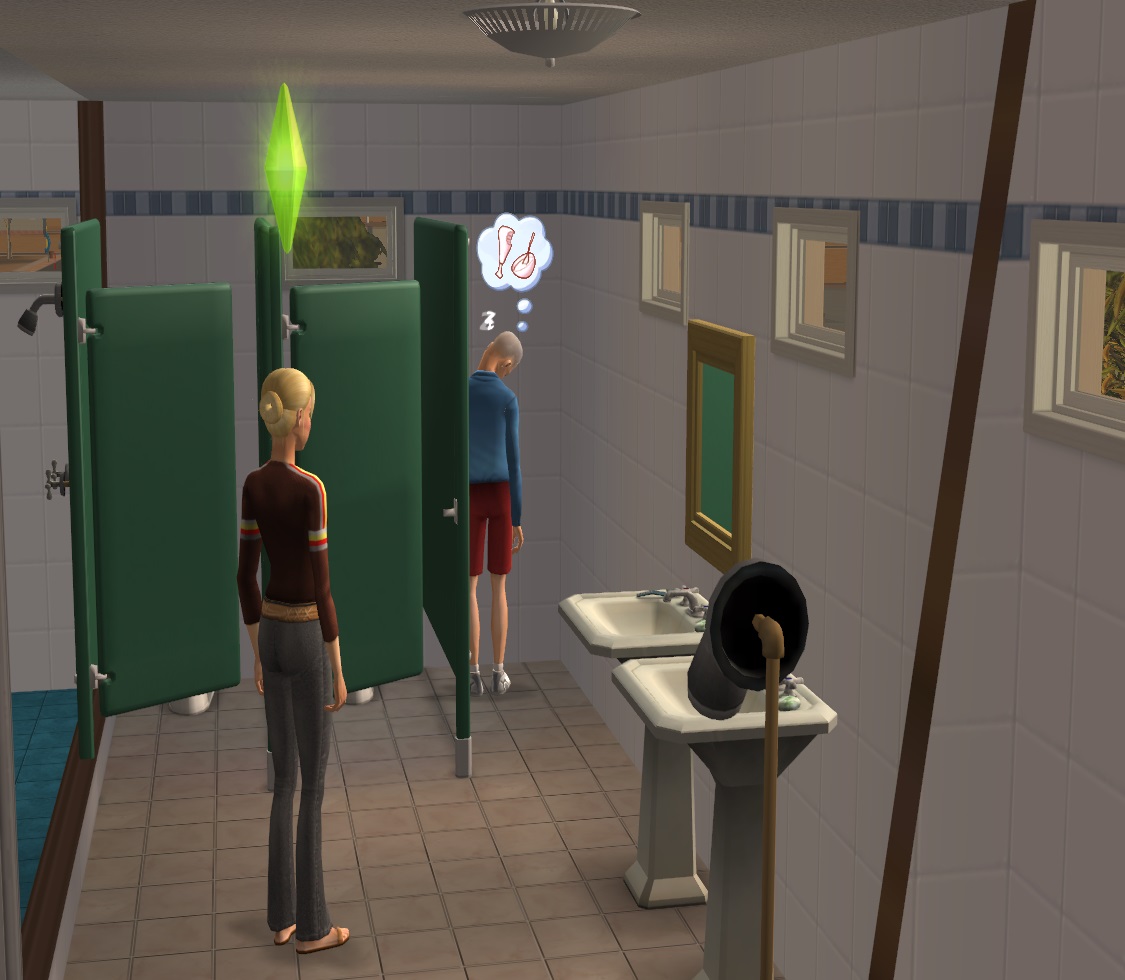 My coach did eventually die. 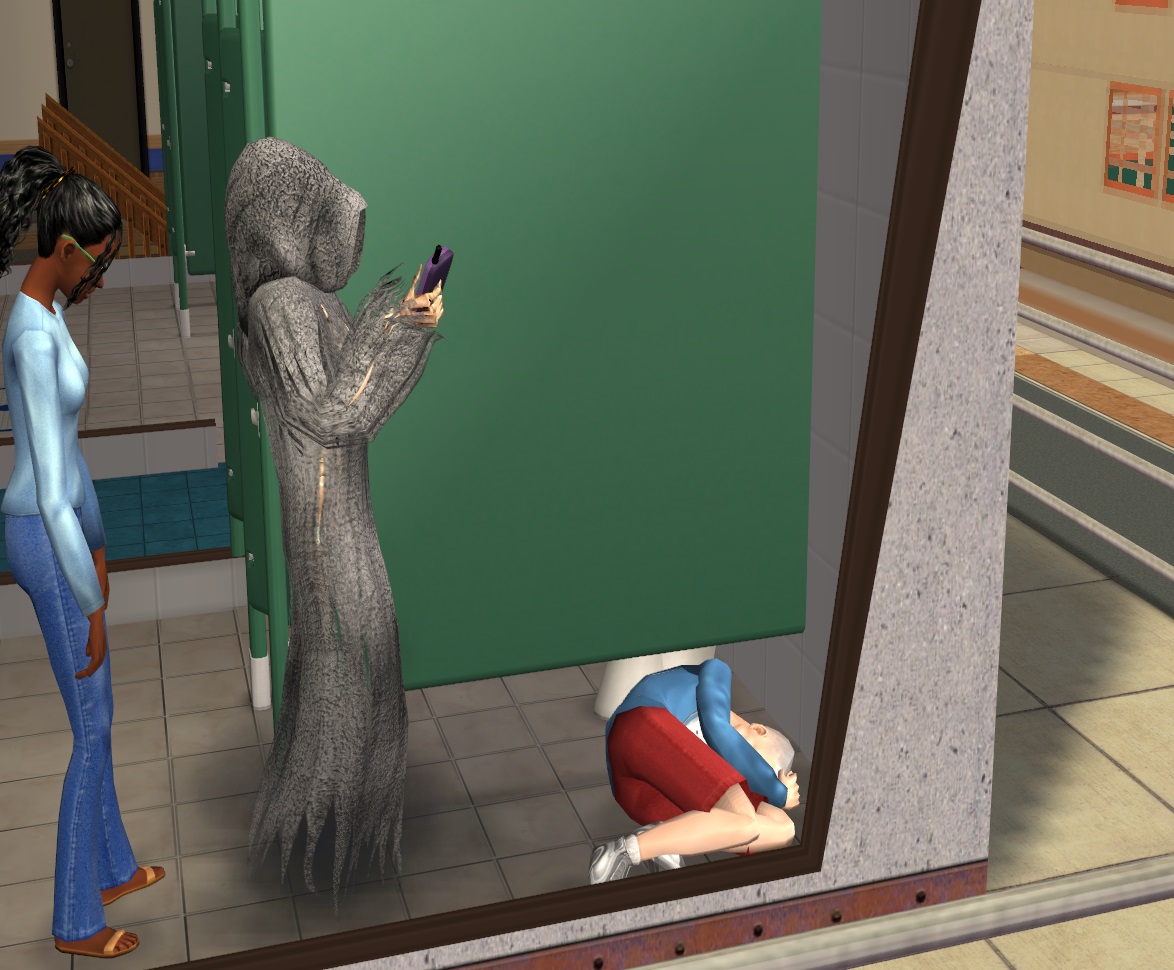 I wonder when the game will replace him?
lfria

Taking some time out from studying to earn some simoleans. 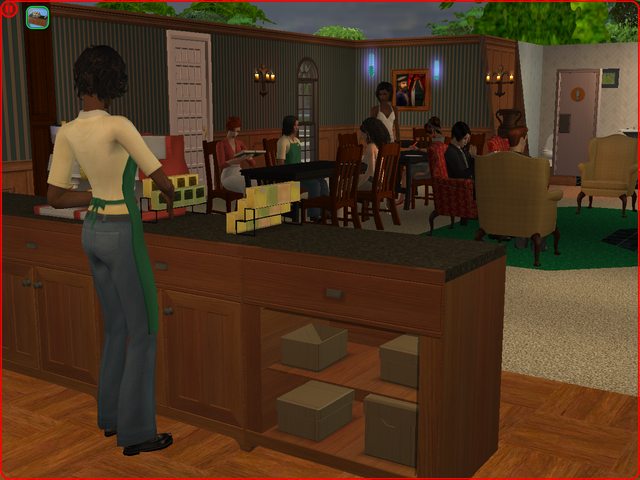 I added this university to my hood and found out that all lots were empty, so I decided to quickly create my own university on this sc4 terrain.
Back to top